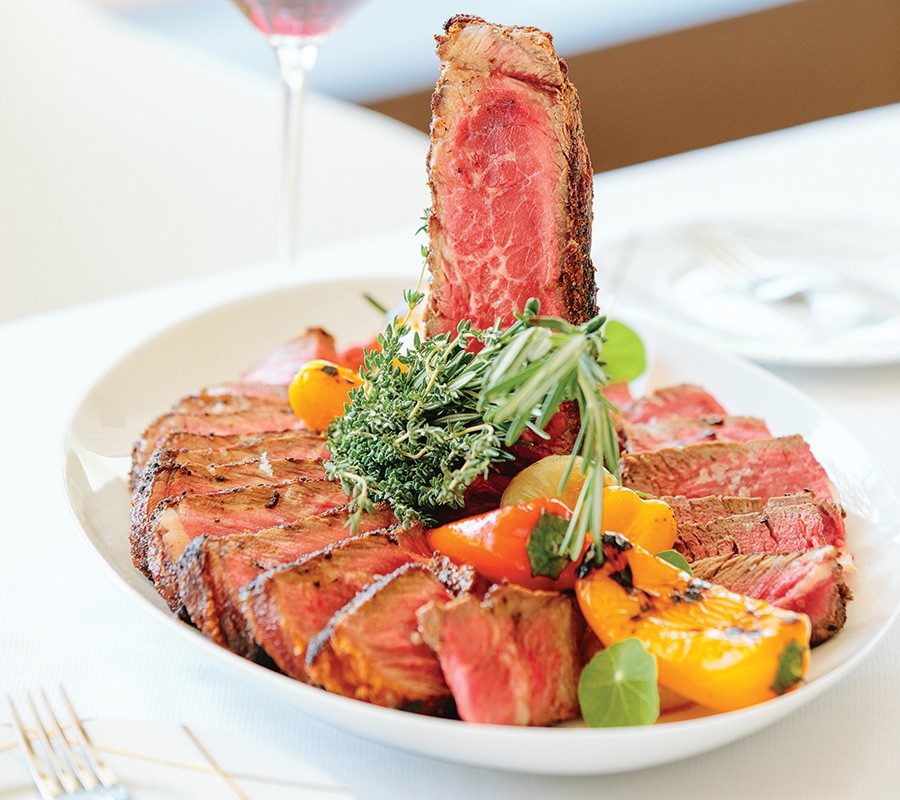 The stakes were high when Rare’s much-buzzed-about Kobe rib-eye arrived at my table. Though small—about the size of a playing card—at $220 for four ounces, this pedigreed chop was priced for a whale. I split it in half to check the temperature—medium-rare, as ordered—then cut off a piece and extended it toward my new best friend Marianne, a loquacious Dorchester retiree seated next to me at the bar (such carnal indulgences are usually more fun when shared, after all). Prized Kobe was a first for her, and as she began to chew, her eyes widened in delight.

Bingo! That’s exactly the kind of reaction a steakhouse needs to elicit to stand out in a city with so many high-end options. And Rare, inside the new Encore Boston Harbor casino, certainly has an ace up its sleeve: It’s the only place in all of New England that sells certified-authentic Kobe beef, considered among the world’s best, highlighting it alongside several similarly hard-to-find (and high-priced) cuts.

“Deal me in!” you bellow—but wait, know this: As with the $50-minimum blackjack tables down the hall, dining at Rare is an expensive proposition with uncertain outcomes. Spend enough money, and you’re bound to hit some jackpots. But odds are just as good that you’ll leave with a thought lingering in the back of your mind: Was it really worth it?

First, some context: There are 15 dining and drinking establishments at Encore, and Rare—seemingly modeled after SW Steakhouse at the sibling Wynn Las Vegas—fills the flagship glitzy-steakhouse slot. Though casino dining may have grown significantly in variety and sophistication over the years, every resort still has a place like this: an essentially uncomplicated facsimile of the Good Life where both a downtown real estate magnate can woo an investor and an ironworker can celebrate his bachelor party, complete with plush seats, strong drinks, and Brobdingnagian slabs of meat. 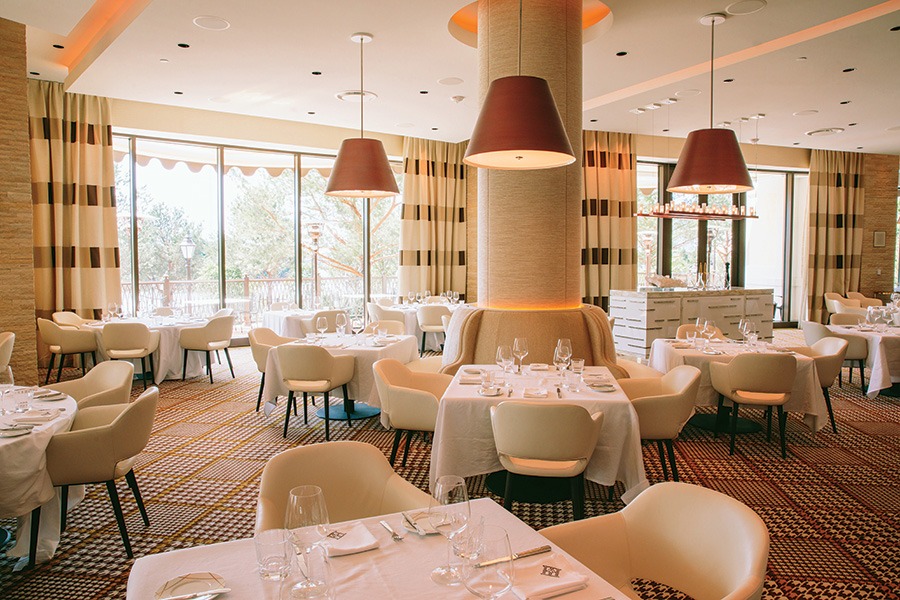 The luxury steakhouse can also be a bellwether stock predicting a casino’s overall culinary performance. So I was especially curious to see how Rare would fare when I first arrived to Everett via water taxi from the Seaport on a warm summer night. Décor-wise, steakhouses typically adopt one of two aesthetics: what I like to call “Teddy Roosevelt’s Library” or “Dad’s Dating a Younger Woman.” Rare, with its midcentury-modernish, white-on-white interior and Mystic River views, hews to the latter.

Once settled at the table, the games begin. First up, cocktails—and they are a crapshoot. On one hand, you might score gin martinis (starting at $15) that arrive barely cool (and clean, though ordered dirty). On the other, you could end up with something much better, like a Rye Fashioned ($18), which was suitably dark and smooth.

Starters also boiled down to the luck of the draw. A classic caesar salad ($19) offered a meager bundle of romaine hearts dressed no better than the players at the cheap slots. The baby iceberg salad ($18) was a slight improvement, owing to the zing of its whipped-blue-cheese dressing, but the wad of tired lettuce—dusted with salad-bar-style candied bacon crumbs—would fold quickly against downtown competition. More successful was the roasted-peach salad ($18) with baby kale, goat cheese, and a puckeringly tart vinaigrette, as well as roasted-corn soup ($16), lightly sweet with a kick of espelette-pepper-driven heat.

Of course, a proper steakhouse also needs some swanky seafood, and a half-pound order of king crab leg ($48) certainly fit the bill, offering a drumstick-size joint of flawlessly fresh crustacean. A dozen fresh and briny oysters ($29), meanwhile, might be the best deal in the house. But then there was the lobster roll, a New England classic that returned from a weekend in Vegas covered in caviar, black truffle shavings, and gold leaf—for a $68 buy-in. Ante up for this ridiculousness, and you deserve what you get: grainy lobster meat inexplicably mixed with a fine dice of celery and carrot in an overloaded brioche bun that demands to be dismantled, rather than enjoyed. 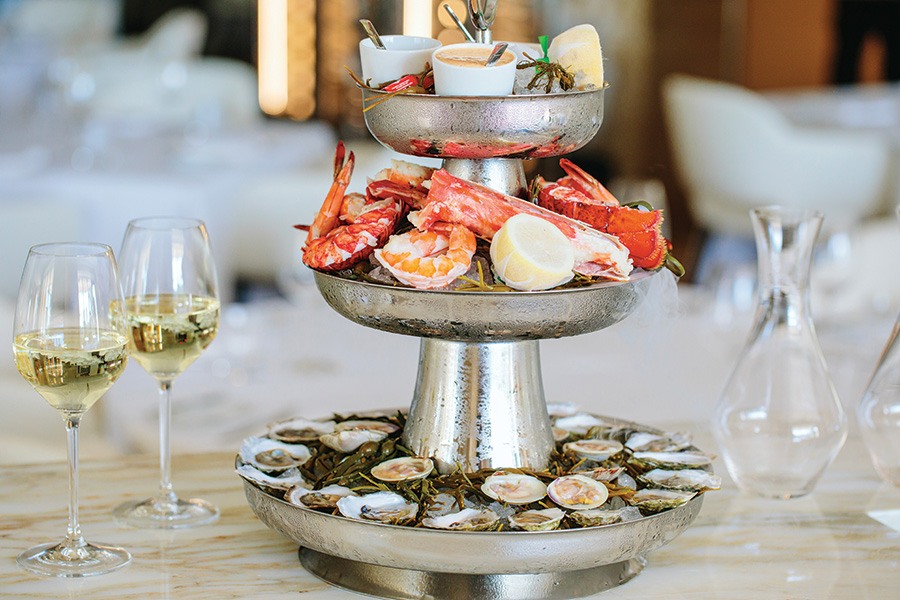 At Rare, though, the steaks are supposed to be the real stars—from the traditional cuts, including some dry-aged on site, to more-exotic offerings such as the aforementioned Kobe. The cowboy rib-eye, a 24-ounce bone-in beast ($82), was nicely marbled and juicy, while the 18-ounce bone-in strip ($72) was satisfyingly denser and beefier, just as one would expect. Preparation, though, was less predictable: Steaks ordered medium-rare sometimes arrived medium, and vice versa. At least there were solid sides, including creamed spinach ($14) and roasted wild mushrooms ($16). The most pleasant surprise wasn’t even a steak—it was the organic chicken ($38) with spigarello kale, lemon, and raisins over Parmesan polenta, with crispy skin and rich jus that showed as much care as the steaks.

Service, to be sure, was consistent: Attentive but not obsequious, careful but not fussy, the fine stewards did their best to ameliorate a slow kitchen. During one visit, our server proffered two complimentary slices of prized Snake River Farms American Wagyu—normally $98 for 10 ounces—as compensation for the languid pace that dogged our meals. It was fantastic, meltingly tender and deeply flavorful. I regretted not ordering it for my main, though I recovered easily when my 16-ounce bone-in filet ($84) arrived, perfectly tender and topped with garlicky shrimp scampi, a $24 add-on.

And then, of course, there was that treasured Kobe. It came to the table sans pomp and elaborate plating, accompanied by a silver medallion that read “KOBE RIB.” Here it was, that mythic, richly marbled beef from a single strain of Japanese black cattle that must be raised and slaughtered according to strict standards. I understood Marianne’s reaction—the Kobe was excellent, to no one’s surprise. But then again, so was the American Wagyu, and at a fraction of the price. So here’s where the personal calculus comes in, as it does with any trip to the casino: risk versus reward, price versus payout. While there are certainly riches to be found, Rare, so far, is still a gamble.