Where to Find the Best Dumplings in Boston Right Now

Seasoned meat, vegetables, broth, or a combination all wrapped up in dough, dumplings are beloved around the world—and definitely here in Boston. Our local dining scene is brimming with simple and savory staples from cuisines across Asia in particular, whether steamed, pan-fried, or soaked in chili oil. From Chinatown stalwarts serving up juicy soup dumplings to pan-Asian cocktail bars riffing on gyoza, here’s where to find the best dumplings in Boston. 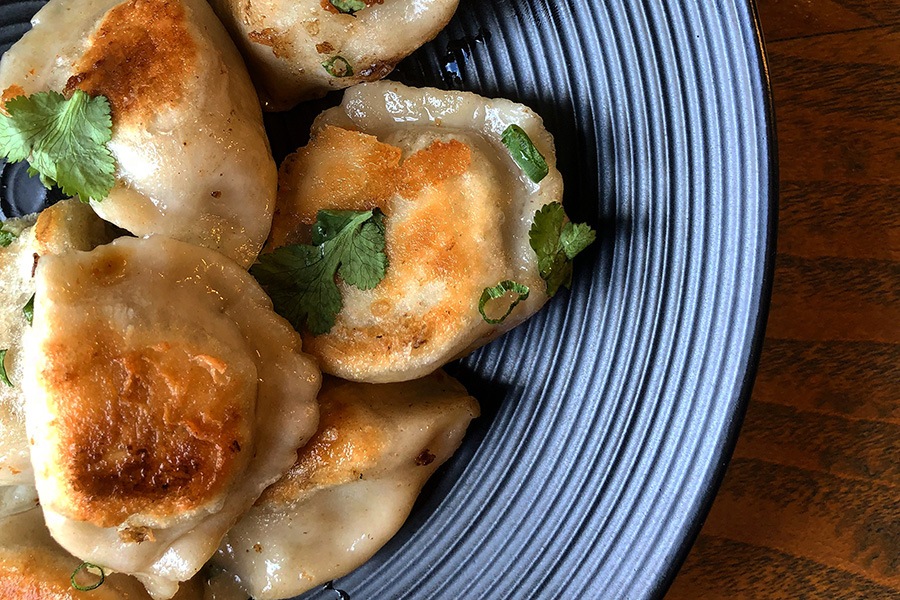 Pull up an after-work seat at this modern, pan-Asian gastropub for the “Dumpling Party” happy-hour special: Five bucks gets you 10 pan-fried, pork-and-leek pockets. (The deal is on daily from 4-5 p.m.) Anytime, though, you’ll find excellent chili-oil dumplings available to spice up your night.

This homestyle, humble little spot strives for healthy renditions of noodles and more from chef Jenny Chin’s native Jiang Nan region of China. That includes a short but strong list of dumpling options, both pan-fried and steamed, wrapped in a delicate, just-thick-enough rice dough made in-house every day. Don’t skip the steamed chicken dumplings swimming in spicy Sichuan sauce, or the light wonton soup.

Nothing cuts the intense, numbing spice of chili-oil slicked dumplings quite like a luscious, refreshing cocktail. Ran Duan kept this in mind when he revamped his retired parents’ Brookline Village stalwart Sichuan Garden into this cool bar, maintaining menu-staple steamed pork dumplings with chili vinaigrette and adding destination-worthy drinks—available at present in bottled, to-go form, as well. 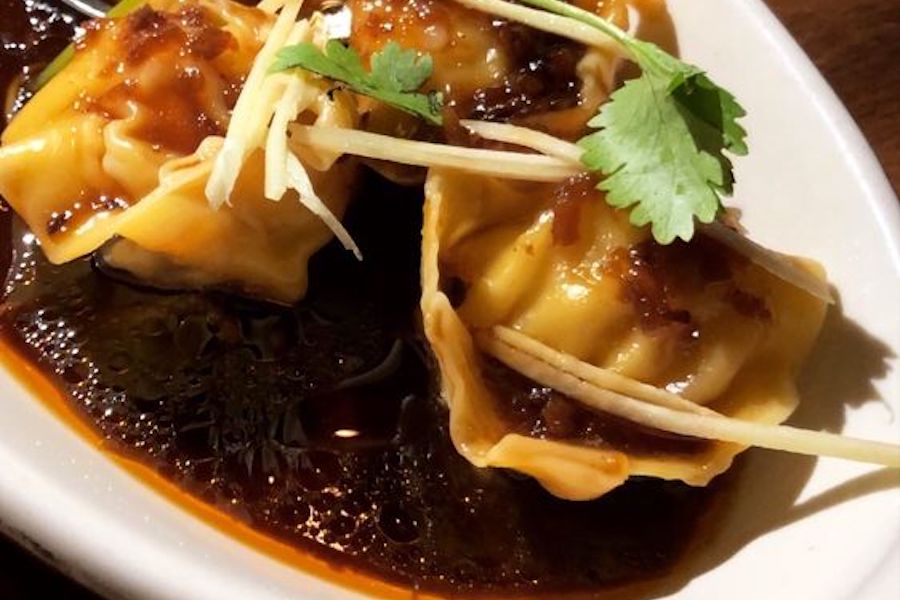 Photo by Jacqueline B. via Yelp

This two-year-old addition to Cambridge is a first-class cruise through regional Chinese and Southeast Asian cuisines and preparations—from the Sumatran-style beef cheek to Malaysian-inspired calamari to a soft shell crab dish representing flavors of Vietnam. China’s Yunnan province, meanwhile, gets a nod via stellar steamed snapper dumplings with chili and black vinegar sauce.

Owner Nadia Liu Spellman was inspired by her parents’ cooking when she first opened this fast-casual dumpling house in Weston in 2014—but instead of the high-end Chinese cuisine the elder operators put on the map at their bygone waterfront restaurant, Sally Ling’s, Spellman focuses on the homestyle fare her mother made at home. You’ll feel right at home at Dumpling Daughter’s Cambridge and Brookline locations, as well, especially when you’re tucking in to comforts like chewy, petit chicken dumplings in slow-cooked Sichuan sauce, plus bright and spicy XO Cantonese wontons.

Fast. Cheap. Delicious. Three words that are music to our ears in the era of treating ourselves to too-much-takeout. This Cambridge stalwart hits all the right notes with pork, beef, chicken, seafood, and veggie dumplings that are all delicious—and don’t lose a lick of flavor in traveling from Dumpling House to home. 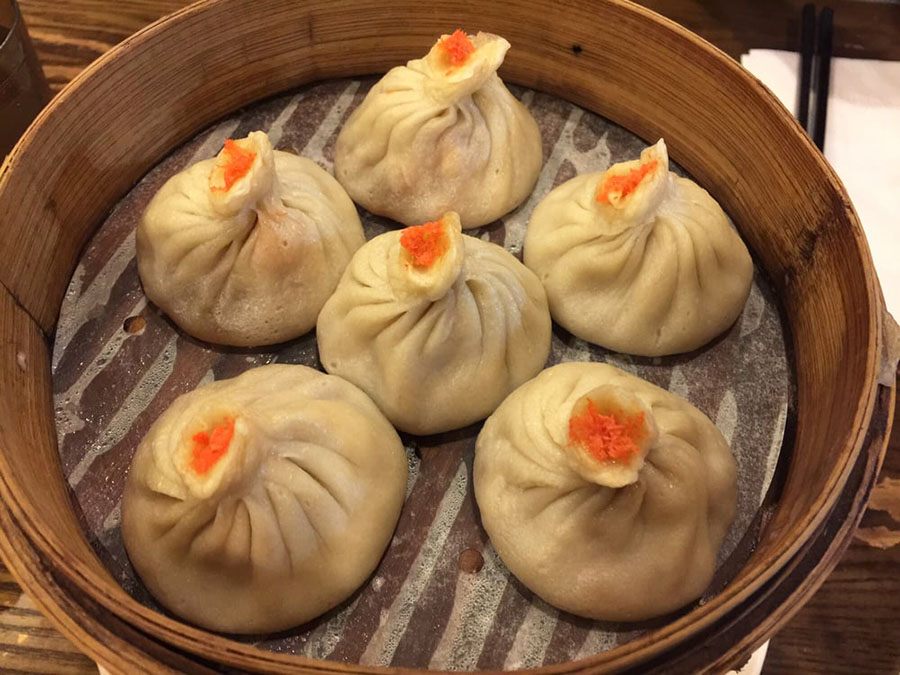 Mini juicy buns with pork and crabmeat at Dumpling Cafe. / Photo by Christine T. via Yelp

“Mini juicy buns,” as chef Peter Wang calls his xiao long bao, is a misnomer: There’s nothing tiny about these beloved soup dumplings. The steaming-hot broth fills your entire spoon with umami, and the thin wrapper and pork-and-crabmeat filling are eminently craveable. Wang also offers juicy buns at his Dumpling Palace, in the Symphony area, as well as Dumpling Kingdom in Allston. That said, we’re particularly fond of Dumpling Cafe’s crispy and cigar-shaped, Taiwan-style pan-fried dumplings. They’re a menu staple at his Chinatown spot, Taiwan Cafe, too.

Creative maki rolls and cool cocktails might bring you in, but the pan-Asian menu also offers a range of eclectic and tasty dumplings, such as gyoza-style pork dumplings with ginger and ponzu sauce; and mushroom dumplings with a chili-dashi broth. Check out this Southie sushi bar on a Monday: There’s unlimited maki on the menu for $27 from 4-10 p.m.

Don’t let a probable line deter you from making a meal out of dumplings here. Crispy-chewy Shandong-style pockets are a must-order, and the juicy soup dumplings don’t disappoint, either.

You’ll need to wait a little bit longer to slip back into the red vinyl seats inside Mary Chung, a wonderfully old-school, inconspicuous Cambridge institution since the 1980s. It’s still takeout-only service at present, so stock up on chive and pork dumplings, steamed ravioli, and other variations to devour on whatever-color living room couch you’ve got. 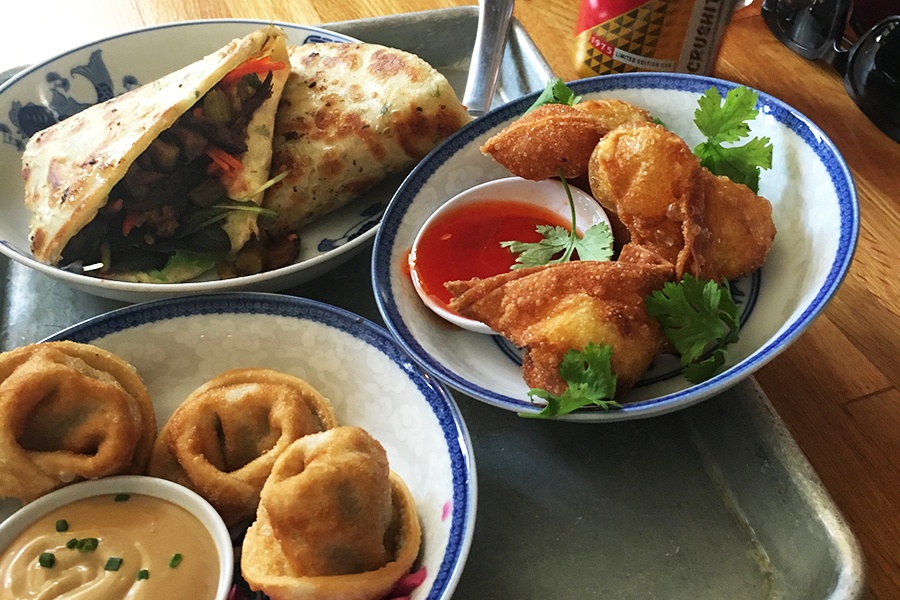 Although its Boston restaurant has transformed from a traditional sit-down operation into a “headquarters” for its new delivery options (as well as picking up prepared-food takeout), Mei Mei’s vegan-friendly dumplings remain a great example of the reinvented Chinese-American comfort food that’s earned chef Irene Li much acclaim: Classic technique (those folds!) combined with innovative flavors, New England sensibility, and high-quality ingredients. Want to learn how to make your own? Virtual classes are available.

Founded by Barbara Lynch group alums Ted Woo and Jon Awerman, one of Boston’s newest pop-up operations focuses on chūka cuisine: Japanese-style takes on Chinese plates. That includes delicious dumplings (filled with pork, cabbage, and spicy sauce) that can be preordered frozen for pickup in Malden or delivery in certain areas of Boston. What’s more, Mimi’s just established a residency at Artifact Cider Project’s Cambridge taproom, if you want to catch them there through spring 2022, at least.

Of all the pan-fried pork-and-chive dumplings in this town, Mama Chang’s are the ones we dream about. Luckily, her daughter—James Beard Award-winning chef Joanne Chang—included the recipe in her cookbook, Myers + Chang at Home.

As they do in northern China, where wheat is a staple crop, dumplings abound on the menu at this northern Cambridge favorite. Pork-and-leek are done especially well here, and there is a venerable vegetarian selection, too. 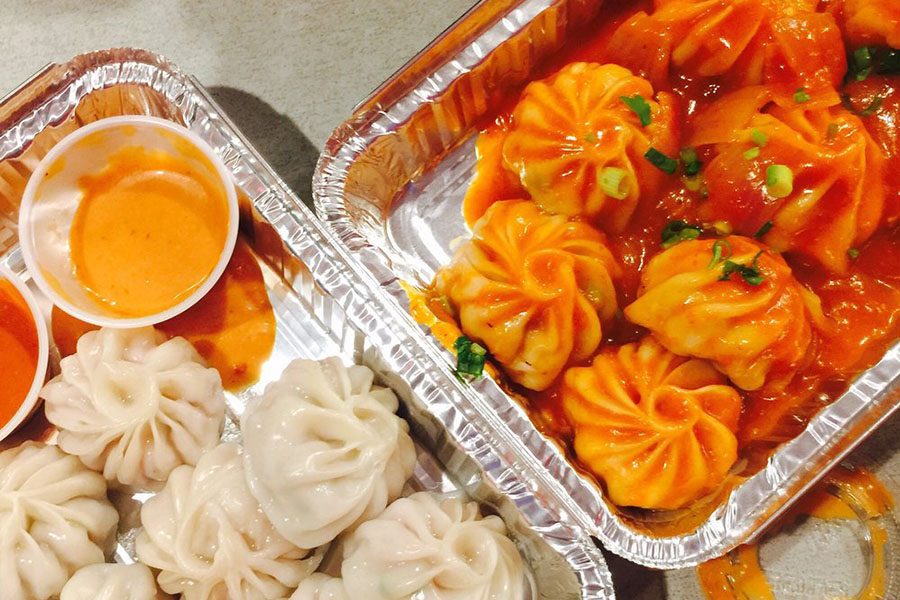 Classic and chili momo at Tasty Momo. / Photo by Trupti T. via Yelp

Sophie Thakali introduced Nepali dumplings, or momo, to Somerville when she opened this Magoun Square spot in 2015. (In August 2019, she moved it across the street to a larger location.) Soaked in a subtly sweet and spicy sauce, the chili momo (filled with your choice of protein) are the way to try her plump, pretty pleats.