Where's the beef? At these mouthwatering standouts from the Back Bay to Beverly.

To outsiders, lobster rolls might be the sandwich most associated with us—but we’d like to go on record as saying that the Boston area is one hell of a roast beef capital, too. Especially when you factor in the North Shore, where roast beef-specializing sandwich shops are legitimately part of the native cultchuh. We’ve gathered the 10 top spots, keeping things to a 30-minute car-ride radius from downtown. Where’s the beef? Right here. 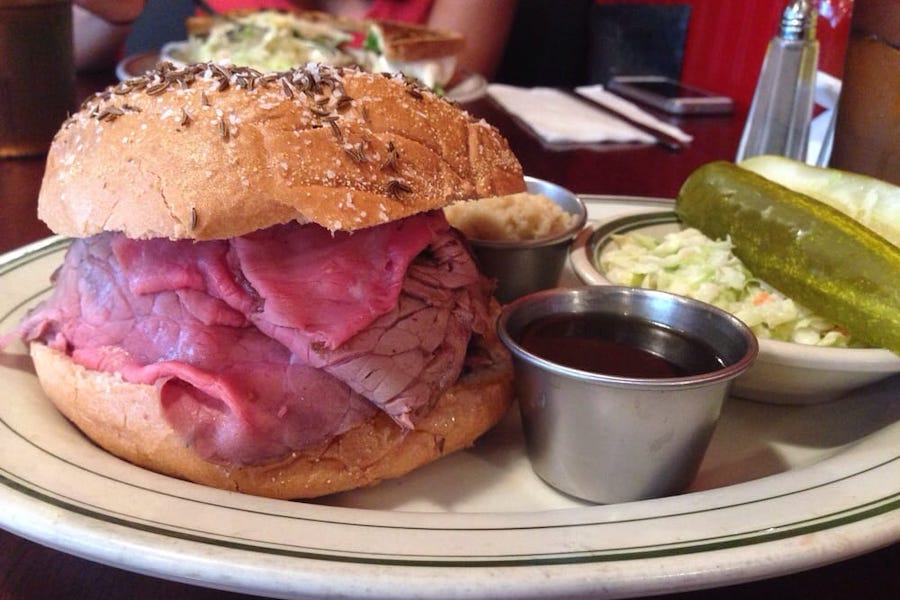 Beef on Weck at All Star Sandwich Bar. / Photo by Kelsey G. via Yelp

Funky, creative sandwiches are the province of this Cambridge classic (which takes a similarly playful approach to pies at All Star Pizza Bar). Its Beef on Weck, though, is a faithful rendition of the roast beef sandwich style that’s typically associated with Buffalo, New York: House-roasted beef is sliced thin and smeared with copious horseradish, then served with au jus dip on a kummelweck roll, which is basically a kaiser topped with kosher salt and caraway seeds. It’s the MVP on All Star’s menu.

When you think of “Revere” and “roast beef,” “Kelly’s” is the next thing that comes to mind. (More on that landmark in a moment.) But in the Revere sandwich wars, Beachmont, just steps away from the same-named T station, is the Best of Boston-winning underdog that always makes us look forward to missing our Blue Line stop. What a shame! Since we’re in the neighborhood, guess we’ll just have to grab an onion roll filled with nice and rare roast beef, cheese, and a bit of BBQ sauce—all for six to nine bucks, depending on how high you want it stacked.

We’re big fans of Billy’s. He’s been around for 30 years, serving generous helpings of barbecue-sauced fresh roast beef on plain, sesame, or onion rolls. (They’re toasted with butter. Even better!) Every sandwich gets cheese (on the bottom) and smears of mayo (on the top), but the Super Beef adds lettuce, tomato, pickles, and horseradish. It’s a nontraditional North Shore play, but never change, Billy—never change. 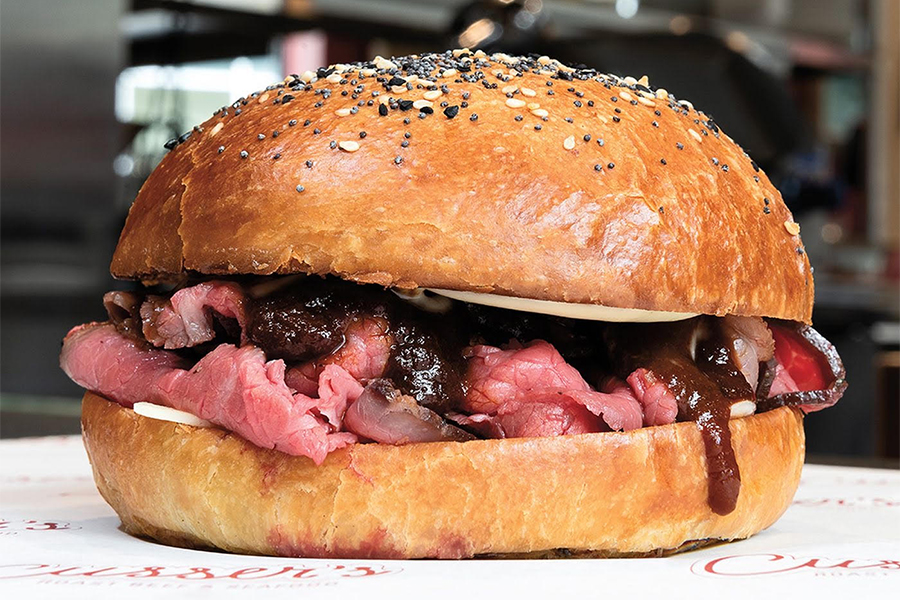 Cusser’s started, seemingly, like a side project: Just a walk-up takeout window on one side of Mooncusser, a white-tablecloth seafood gem (one that recently brought a talented Top Chef into its kitchen). Since then, though, it has expanded to locations at two Boston food halls: Time Out Market in the Fenway and the West End’s just-opened Hub Hall. You can credit that growth to Cusser’s lovely lobster rolls, upgraded chowder, and Best of Boston-winning sandwiches of fine Wagyu beef—glorious!—available in classic Three-Way form (roast beef with mayo, cheese, and barbecue sauce) or 80T Style (with pickled onions and spicy aioli). 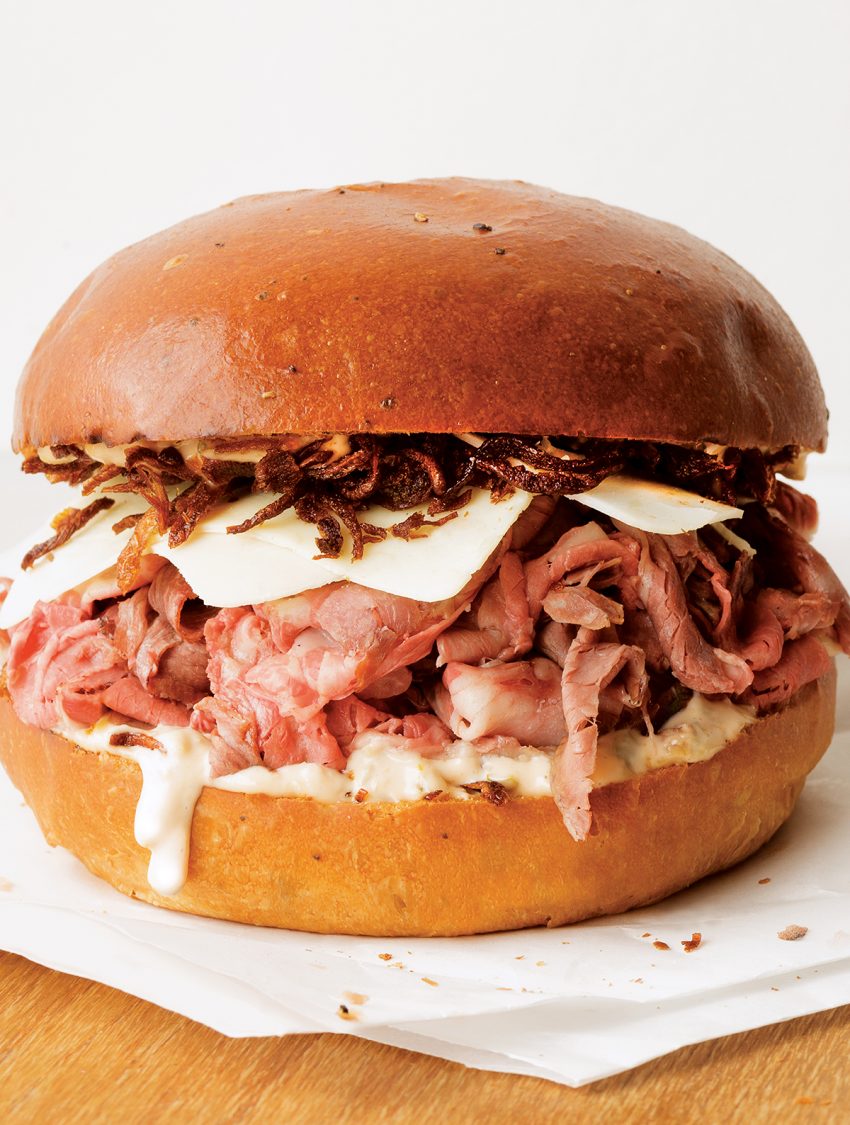 What sets apart the Beef 1000 at Cutty’s? The luscious marbling of chuck-eye roll beef, roasted in house, is just the beginning—there’s also the horseradish-spiked thousand island dressing, sharp cheddar, and crispy fried shallots (ooh!). The pièce de résistance, though, is the black-pepper brioche roll. Sure, the menu at Brookline’s beloved sandwich shop is nothing but home runs, but this beefy one truly bats 1000.

Sometimes less is more. And sometimes you have something like the “Four-Way” sandwich at Dovetail, one of Charlestown’s newest restaurants, which one-ups the classic “Three-Way” on its takeout shop’s menu. For this slightly extra take, an Italian sub roll is piled with rare roast beef, poblano peppers and onions, cheddar fundito, garlic aioli, and fried shallots. That’s a mouthful, that’s the point, and we are very much not mad about it. 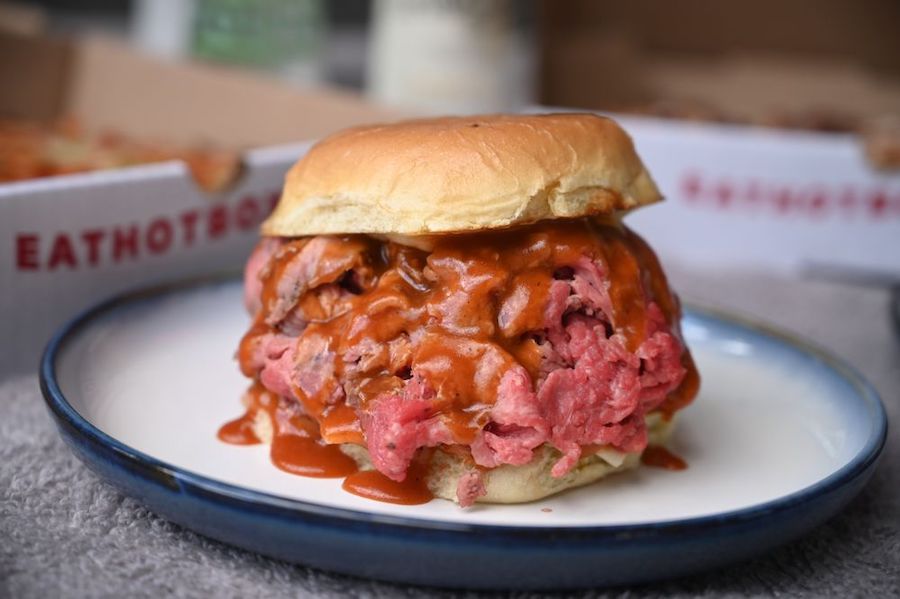 Multiple munchies are satisfied at Hot Box’s walk-up takeout window in Somerville’s Bow Market courtyard, as the place specializes in the most-craved regional cuisines of the North and South shores: roast beef sandwiches and bar pizzas, respectively. Those pies have previously been anointed with a Best of Boston award—and the sandwiches? They’re tops, too, offered in classic Three-Way formation (roast beef with American cheese, mayo, and barbecue sauce) in Junior and Super sizes.

No one should doubt that the original, 1951-founded Kelly’s at Revere Beach is a Bay State landmark that lives up to its legacy of superlative sandwiches: medium-rare roast beef with American cheese, mayo, barbecue sauce, lettuce, and tomato on a sesame seed roll from Malden’s fourth-generation, family-owned Piantedosi Baking Company. Admittedly, there are those who claim that—as with Regina Pizzeria, another local icon turned mini-chain—the other locations don’t quite hit the same spot. But considering that every member of the Kelly’s family roasts the same, 25 day-aged sirloin-tip meat in-house, we’d suggest that in this case, such suspicions are misplaced.

Not to be confused with the similarly standout Mikey’s Famous Roast Beef in Beverly, Mike’s in Everett is a genuine humdinger that’s even closer to Boston. The roast beef, served with cheese on an onion roll, can be covered with your choice of barbecue sauce, hot sauce, horseradish and more—and washed down with tasty shakes in flavors like black raspberry. Bonus: The place is only one mile away from Everett’s Fermentation District, home to Night Shift Brewing, Bone Up Brewing Company, and Short Path Distillery, so you can snag a sandwich before swinging by for curbside bottle pickups. 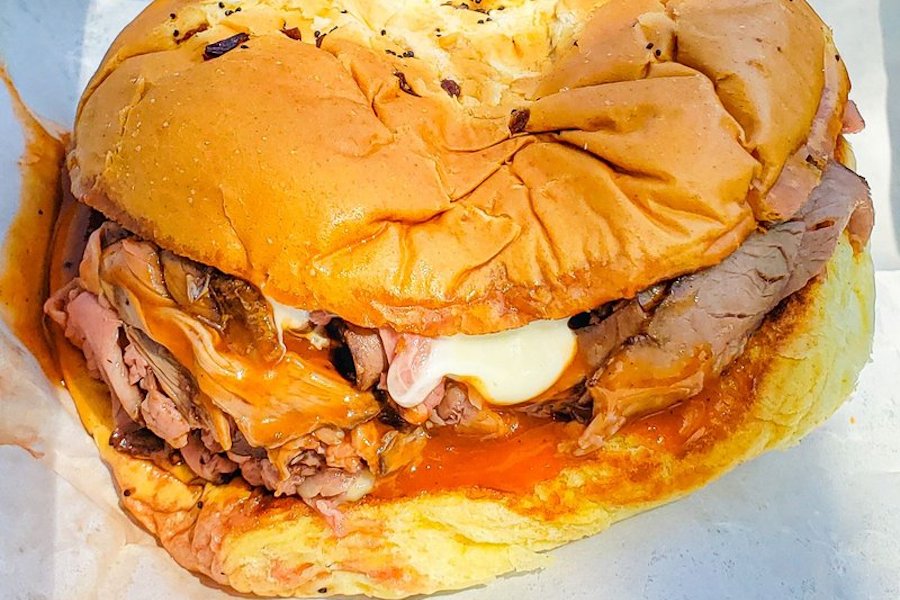 Another roast beef specialist, another possessive-form first name. (This is a thing, apparently.) Nick’s sandwiches could never be confused for another’s, though, as they’ve even earned People magazine press by representing Massachusetts on a state-by-state list of America’s best sandwiches. And yet, no outside validation is needed; anyone who has had these super-tender slices, which come generously sauced-up with barbecue (grab extra napkins) can attest that they might be the best for miles around—and thus, more than earn the Boston-to-Beverly jaunt.

Naturally, this lovely little gourmet coffee, breakfast, and lunch operation inside Lamplighter had to make use of its brewery-set location. That explains why lager-glazed onions enters the equation for its roast beef sandwich, joining cheddar, horseradish mayo, and of course, a big pile of Bay State-raised beef. Add a brew from Lamplighter’s list, and it’s the perfect formula.

The menu at this inconspicuous Cambridge spot covers all the ground you’d expect of any similar counter-service joint in the city: There’s salads, subs, pizzas, fried seafood, and the like. There’s a reason its roast beef sandwich is featured on the street-hanging sign, though—it’s the clear star in Skampa’s ensemble, offered on an onion roll in the classic Three-Way form. There’s three sizes, too, but when the roast beef is this good, we’ve yet to hear a compelling argument that bigger isn’t better.