Five Natural Oddities You Can Find Outdoors near Boston

See some of New England's more unusual sites, without traveling too far from home. 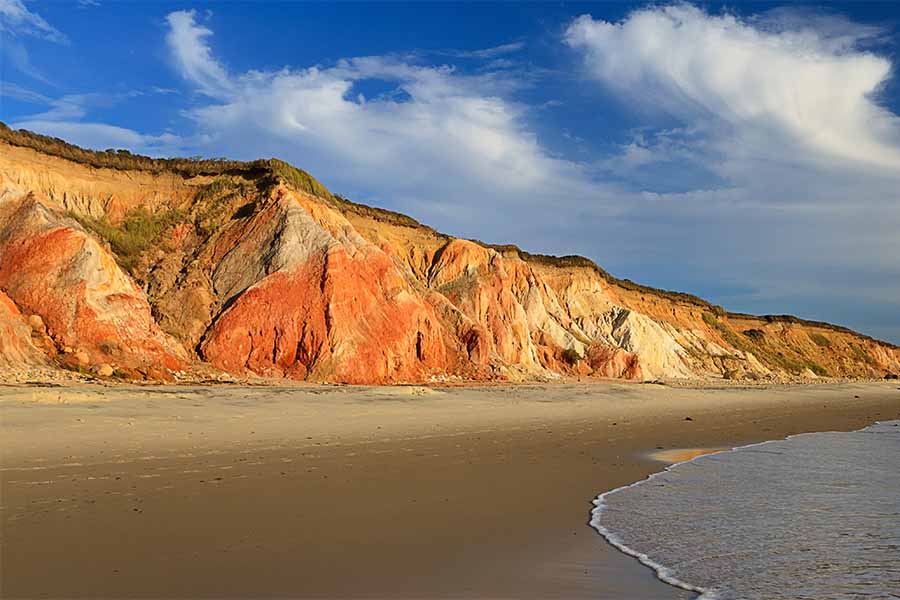 Photo of Cliffs of Aquinnah via Katherine Gendreau Photography/Getty Images

As we’re all too well aware, it’s tough to find safe ways to get out of the house during a pandemic. There are the same old parks you’ve been going to all along, but as nice as they are, they can get a little stale after a while. So for a breath of fresh air, consider visiting these unusual natural formations on your next day trip. They’re all within a three-hour drive from Boston, so pack up a picnic and hit the road.

Tucked away off the side of a quiet road, you’ll find the Cockermouth River running through a land of odd rock formations and whimsical glacial potholes. If you’re familiar with roads around Boston, you’re probably groaning at the thought of potholes, but don’t stop reading yet! These are potholes you’ll actually want to see. Artistically sculpted by glaciers, the water-filled holes and curvy canyon walls are a museum-worthy sight. It’s so picturesque that some call it the “Grand Canyon of New Hampshire.” It’s a great swimming spot in the summer and the rocks provide many options to jump from when the conditions are right (for the daredevils out there). The area is open year-round, but watch out for slippery rocks.

Bonus: The Basin at Franconia Notch State Park in Lincoln, NH is a 20-foot-wide glacial pothole a couple of hours away from Groton. You can also find an impressive display of over 50 glacial potholes in Shelburne Falls, MA.

Take a look at the tie-dyed face of Aquinnah Cliffs and you may think you’re far from home, but you’ll be standing at the westernmost point of Martha’s Vineyard. The colorful layers of red and white clay, black lignite, and white sand are evidence of different geological eras. They come together to form a breathtaking scene, especially around sunset. Because the cliffs are on native Wampanoag land and environmentally protected, you’ll have to resist the urge to climb on them or grab a hunk of clay to bring home. But you can still enjoy the sights from the top of the cliffs or walk along Moshup Beach to admire the cliffs from below. Just be prepared to see a potentially more shocking natural wonder—the beach is known as an unofficial nude beach.

Bonus: It wouldn’t be a proper trip to the Vineyard without hitting the beach. Katama Beach (also known as South Beach) in Edgartown is the place to go whether you’re into surfing strong waves or unwinding in a tranquil salt pond—it has both! 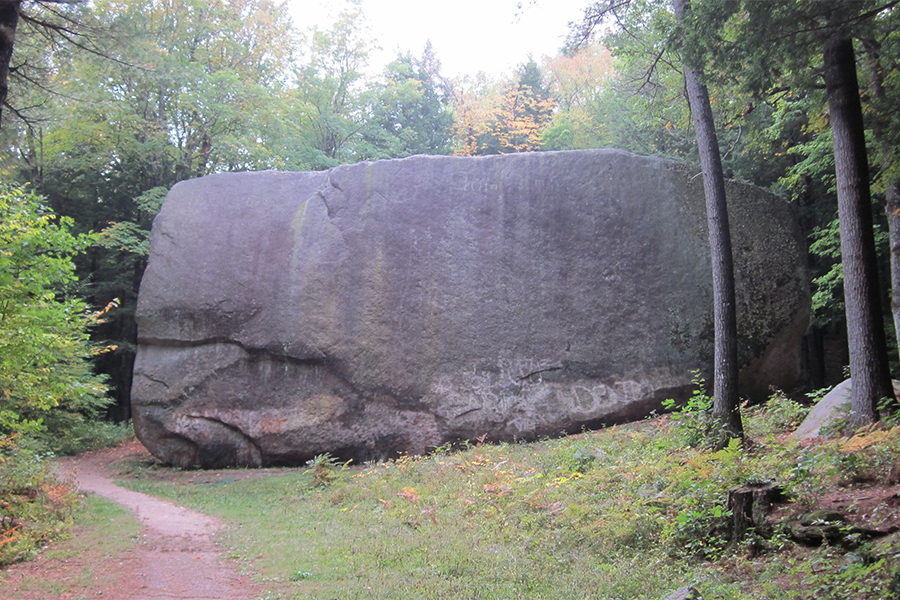 The Madison Boulder is the largest glacial erratic in North America. A glacial erratic is a sizable rock that was moved from its original location by a glacier, which often means it looks strangely out-of-place in its new environment. And a glacier is basically the only thing that would be able to move the Madison Boulder—it weighs over 5,000 tons and stands 83 feet long, 37 feet wide, and 23 feet tall. That’s larger than the average house in the United States. Be sure to pack a lunch, because the area around the rock is perfect for picnicking. From the parking lot, you’ll reach the boulder after a peaceful 10-minute walk through the forest, where it lies like a supersized elephant that fell from the sky.

Bonus: To see some smaller (but still magnificent) glacial erratics, pay a visit to Doane Rock in Eastham, MA or Agassiz Rock in Manchester-by-the-Sea, MA.

The highlight of this 196-acre reservation is the eponymous Rock House. At the end of the Ice Age 12,000 years ago, a glacier moved through the landscape and carved this 30-foot-high boulder into a convenient shelter. With part of the rock jutting out overhead to form a large roof, Native Americans used it as a camp to protect them from the harsh New England winters. Years later, colonists used the land for farming and more. Today, the reservation is also home to Balance Rock (a precariously placed glacial erratic), man-made Carter Pond, and several activities like hiking, horseback riding, and mountain biking.

Bonus: Natural Bridge State Park in North Adams, MA is where you’ll find the only natural white marble bridge on the continent. The 550-million-year-old marble was shaped into an arch by glacial runoff after the Ice Age. 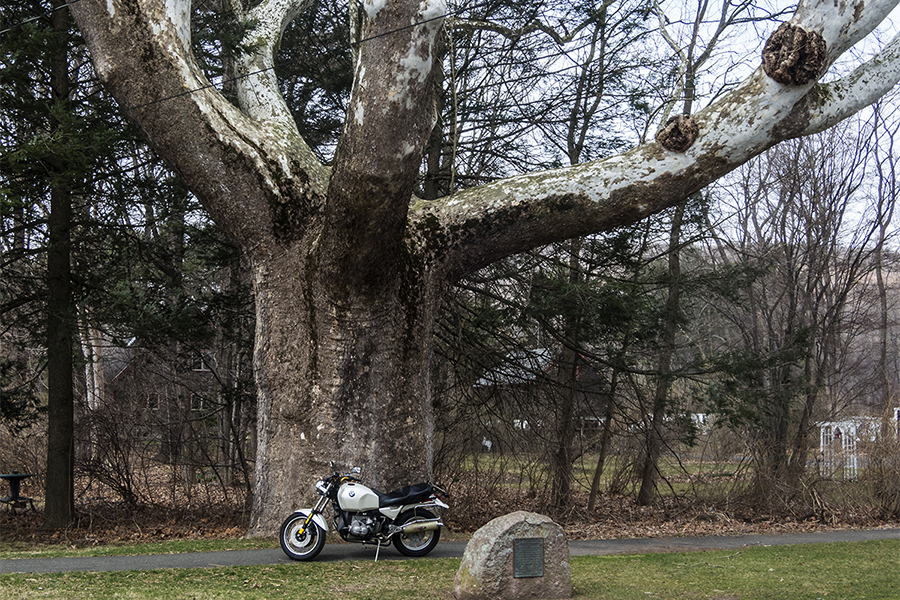 “Buttonball” is another name for an American sycamore. But rooted beside an otherwise unassuming sidewalk in the small town of Sunderland, you can find the Buttonball Tree. Towering at around 115 feet high and spanning over 130 feet across with a trunk girth of 26 feet, it’s the largest tree east of the Mississippi River. There’s a plaque beneath the majestic tree claiming it was around during the Constitution’s signing in 1787, but no one knows for sure when it was planted. Estimates put it at around 400 years old. There’s a small space to park right in front of the tree, but it’s a leisurely walk from the nearest parking lot at the public library.

Bonus: While you’re there, hop over to nearby Mount Sugarloaf in South Deerfield where you can hike or drive to the top for an incredible view of the Connecticut River Valley. And if you’re a nerd for record-breaking trees, you’ll be thrilled to hear that there’s another one in Danvers, MA. Planted almost 400 years ago, the Endicott Pear Tree is the oldest living fruit tree in North America. 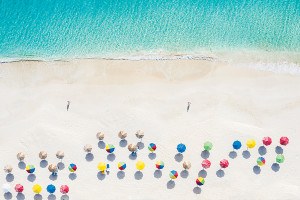