Check Out This Fairytale Wedding at Alden Castle

Complete with a live painter, a photo wall, and a funfetti cake. 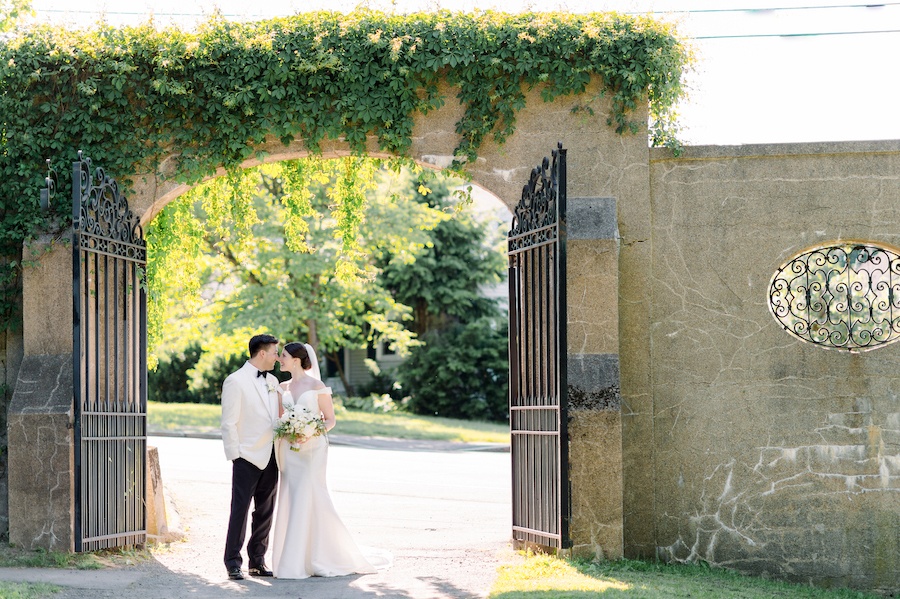 Caroline Kelly and Steven Smith met while attending law school in Boston and instantly became best friends. “We got along really well, and that just kind of continued,” Steven says. Caroline, meanwhile, admits she had “had a crush” on Steven during school—though they didn’t date then. After graduation, Steven moved back home to Buffalo, and Caroline remained in Boston. They kept in contact, though, and eventually Steven said he was coming to Boston to visit. “I had a strong suspicion we’d start dating then. And then we did,” she says. They were in a relationship from afar for six months before Steven decided to quit his job and move in with Caroline in Brighton. “It was hard being long distance, so we didn’t let that go on for too long,” she says.

In May 2018, Steven told Caroline about dinner plans he’d made for them with his boss at an upscale restaurant. So they both got dressed up, and headed out. They were walking down Commonwealth Avenue when Steven suddenly stopped her in front of the Burrage House, which Caroline had long admired. “I dropped down on one knee, asked her [to marry me], and she said ‘Yes,'” Steven recalls. “Then we had a great date together, which was totally different from the date she thought we were going on.” As for Caroline’s reaction? “I [was] shocked,” she says. “You envision what [a proposal] is going to be like, and then it’s just so overwhelming, but in the best kind of way.” A few days later Caroline received a handwritten note in the mail. When she opened it, she discovered it was from her fiancé: Before he proposed, Steven had written down everything he planned to say when he popped the question and mailed it to her so she wouldn’t ever forget what he said in that moment.

When the planning got rolling, Alden Castle was the first venue Caroline and Steven visited. They fell in love with it instantly. “It was a no brainer,” Caroline says. “It just looked like our wedding.” The vision they had in mind? A modern-meets-classic affair with all-white floral arrangements, abundant greenery, and touches of gold and black décor. On their wedding day, after they’d officially exchanged vows, the bride and groom snuck into the reception space for a peek while their guests enjoyed cocktail hour. “You have this image in your head for a year and then you just walk in and see it actually all done,” Caroline recalls. “I cried, obviously. It’s really surreal to be like, ‘Oh my god, this is my wedding and it’s beautiful.'” 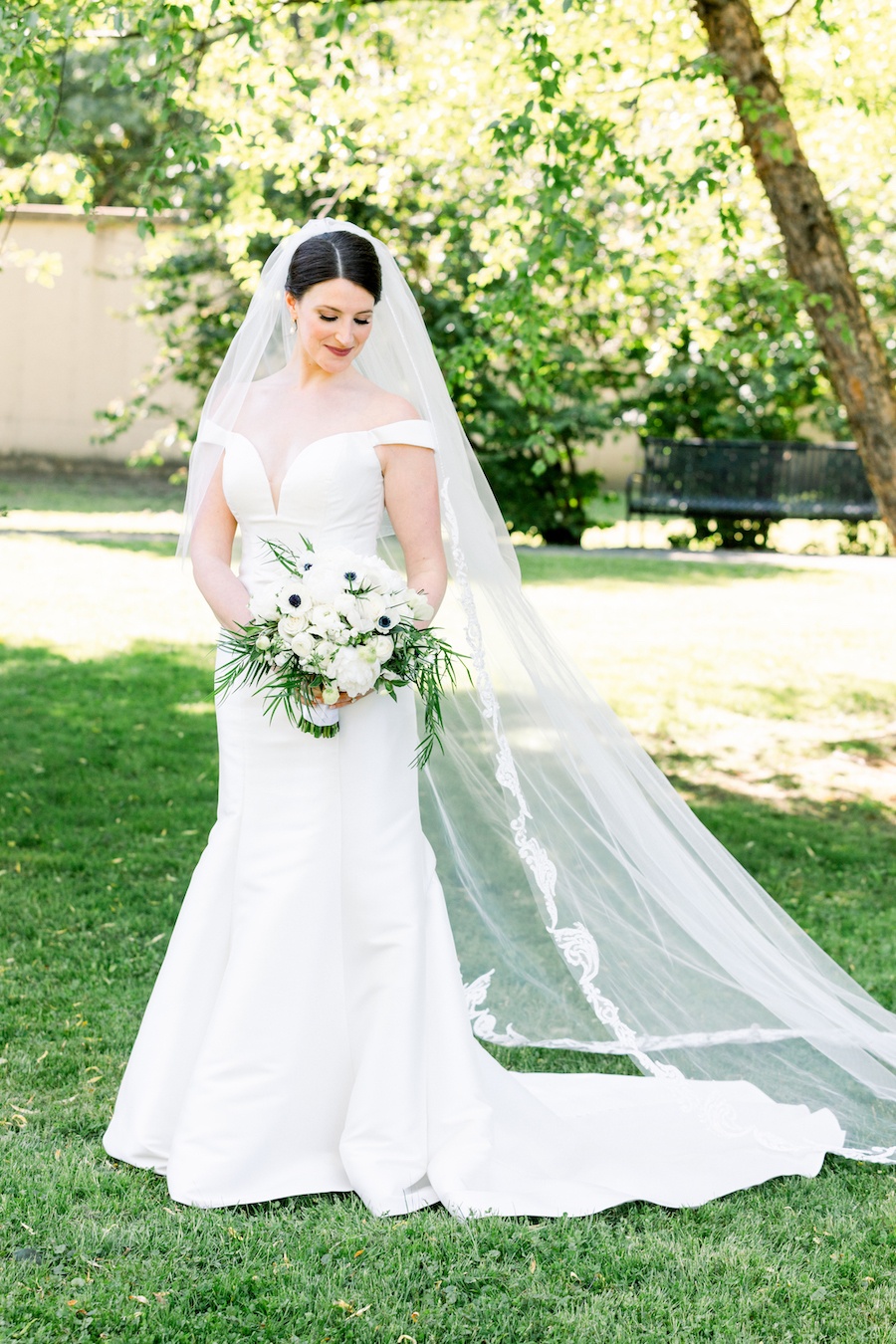 Caroline scored her off-the-shoulder gown at Vows Bridal in Watertown. “My mom found this one and said, ‘Isn’t this exactly what you’re looking for?’ and I was like, ‘Yup.’ I just knew,” the bride says. 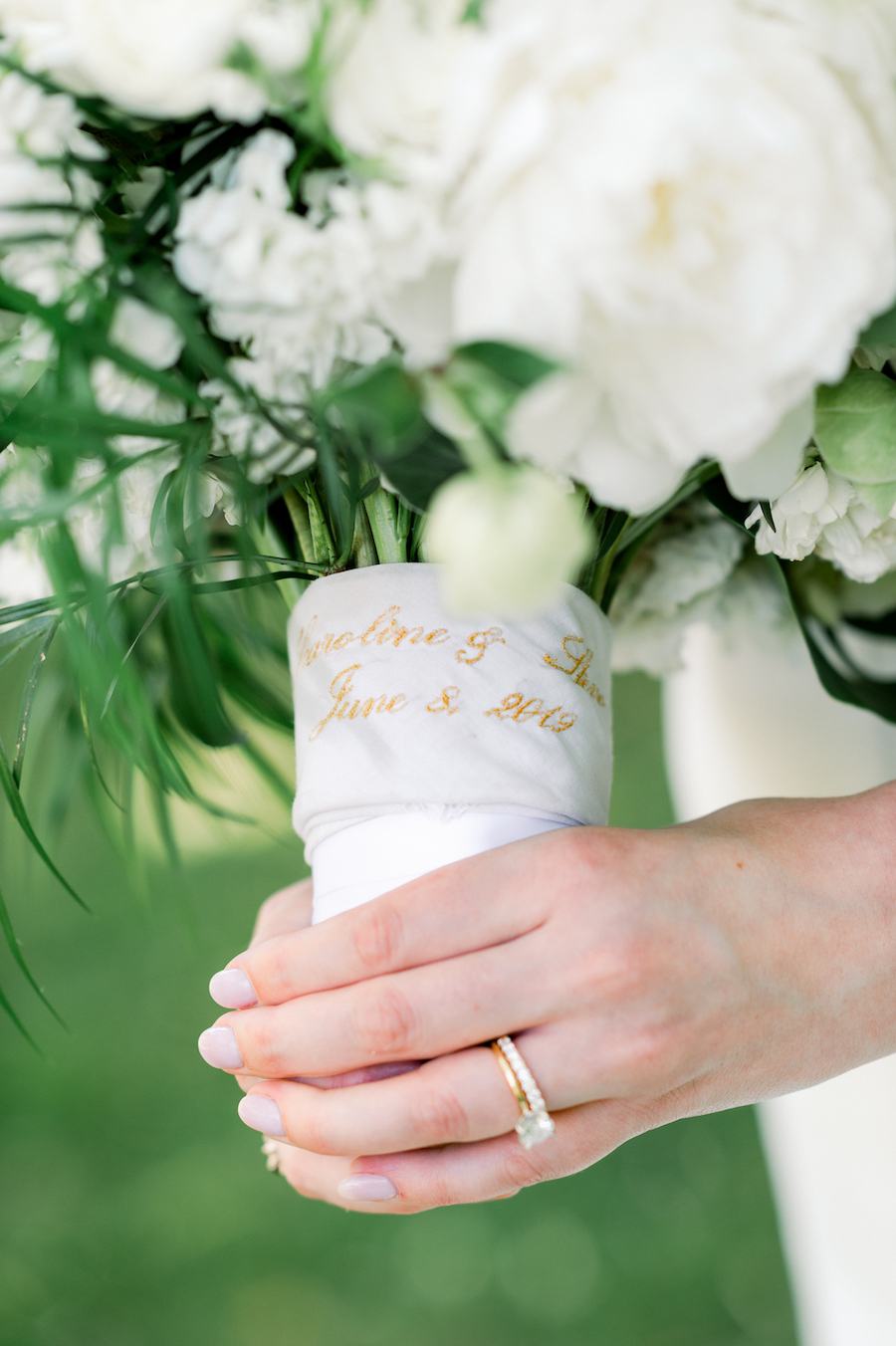 Caroline wrapped her bouquet in a handkerchief that belonged to her late grandfather, which she had embroidered with the couple’s names and wedding date. 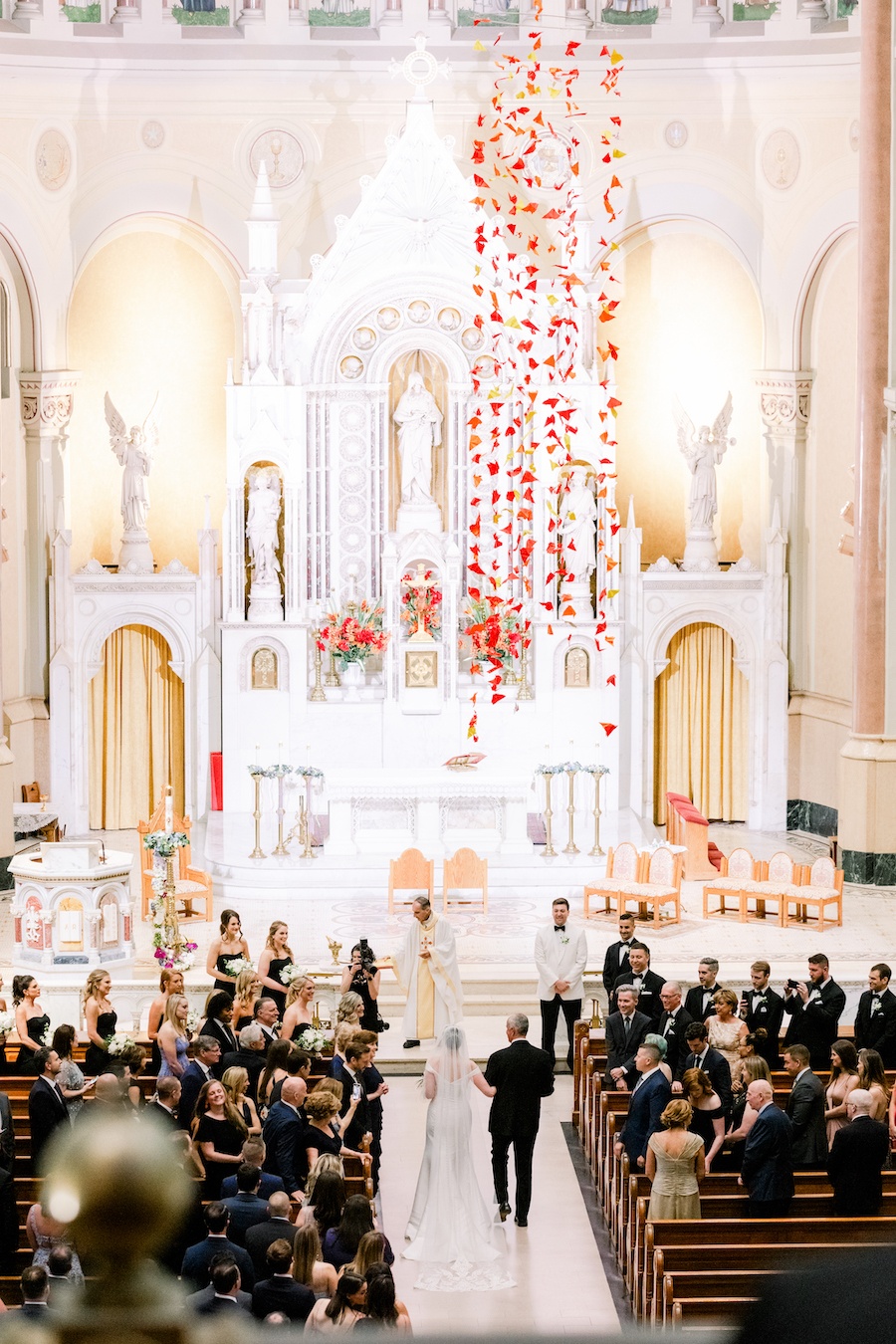 The couple held their ceremony at Boston’s Basilica of Our Lady of Perpetual Help in Mission Hill. “When you walk in, it’s breathtaking,” Caroline says. “We loved the architecture, so we were really excited about that. It’s a big church but still felt intimate.” 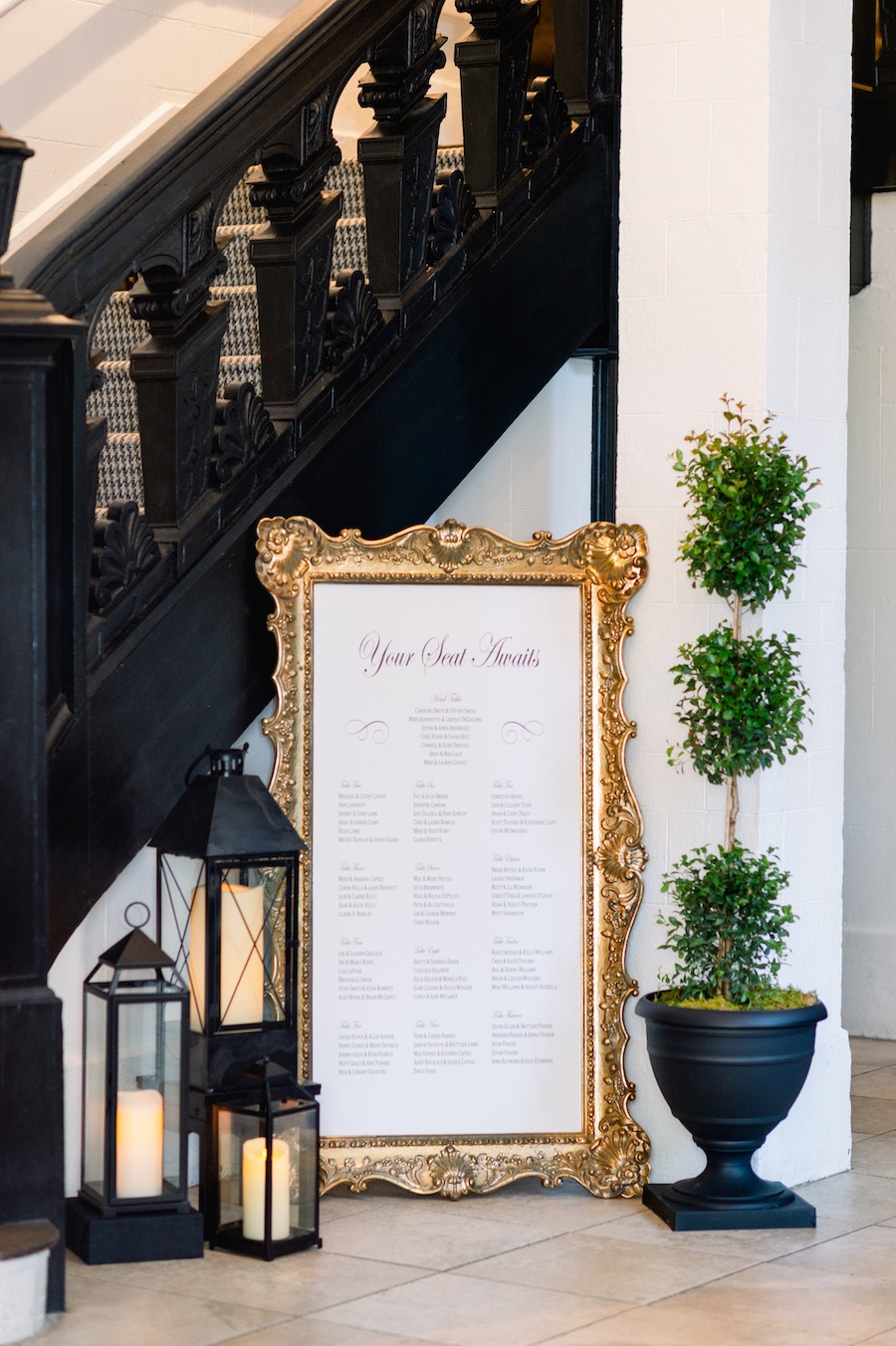 Caroline and Steven knew they wanted to incorporate gold frames throughout their reception décor. When they saw this one at the Brimfield Flea Markets, they knew it would be perfect for their seating chart. 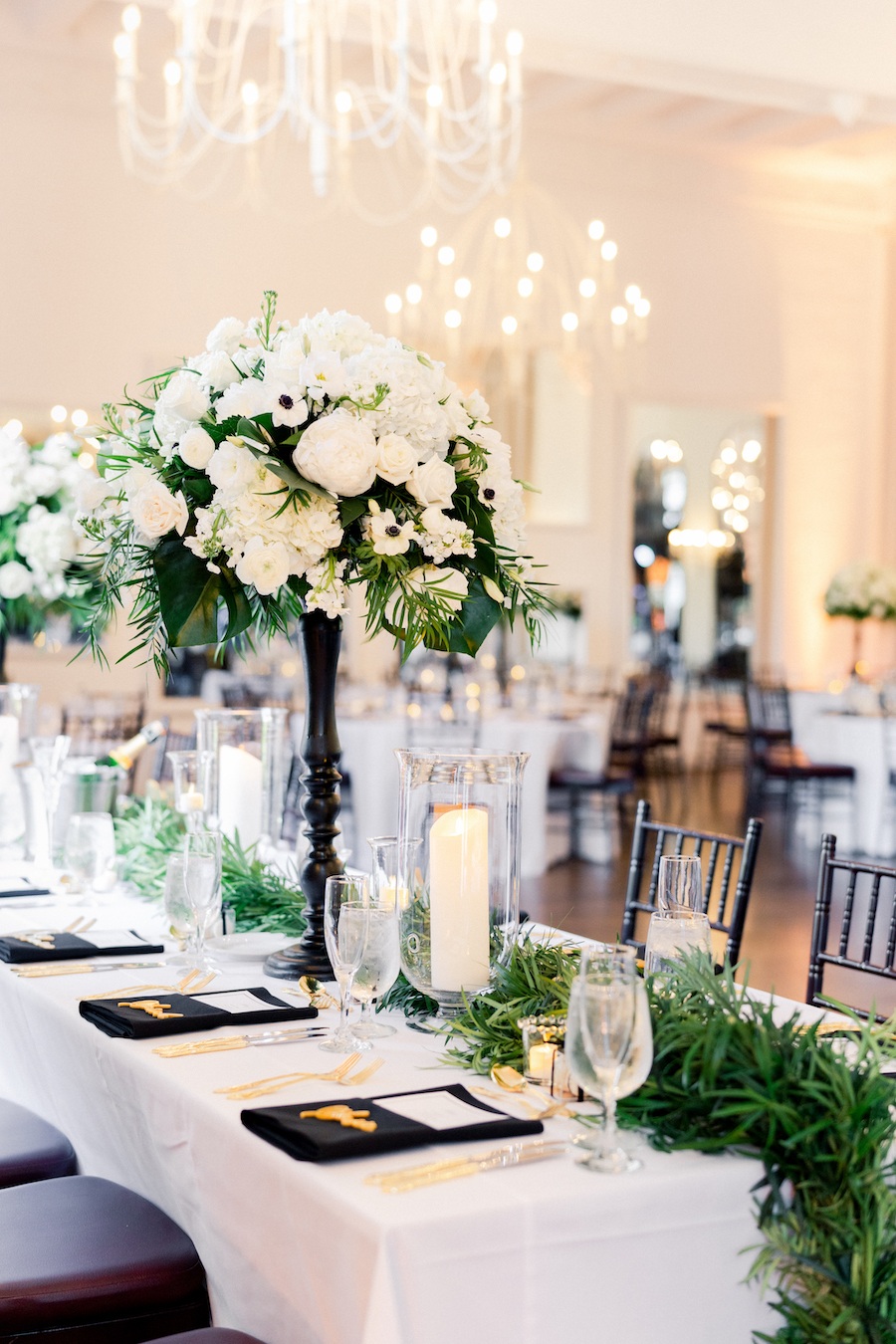 Caroline’s mom, a horticulturist at Mahoney’s Garden Center, designed the flower arrangements, including the tall floral centerpieces on each table. At every guest’s seat, the couple placed an acrylic-gold name card that matched the antique-looking silverware. 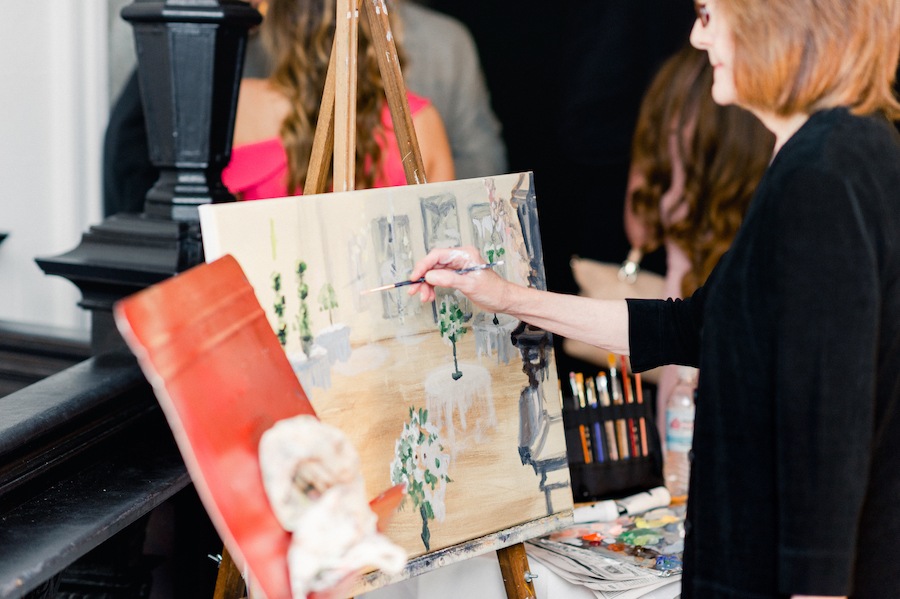 The bride and groom enlisted live painter Sheila Foley, who posted up on the balcony above the dance floor, to capture the affair throughout the evening. 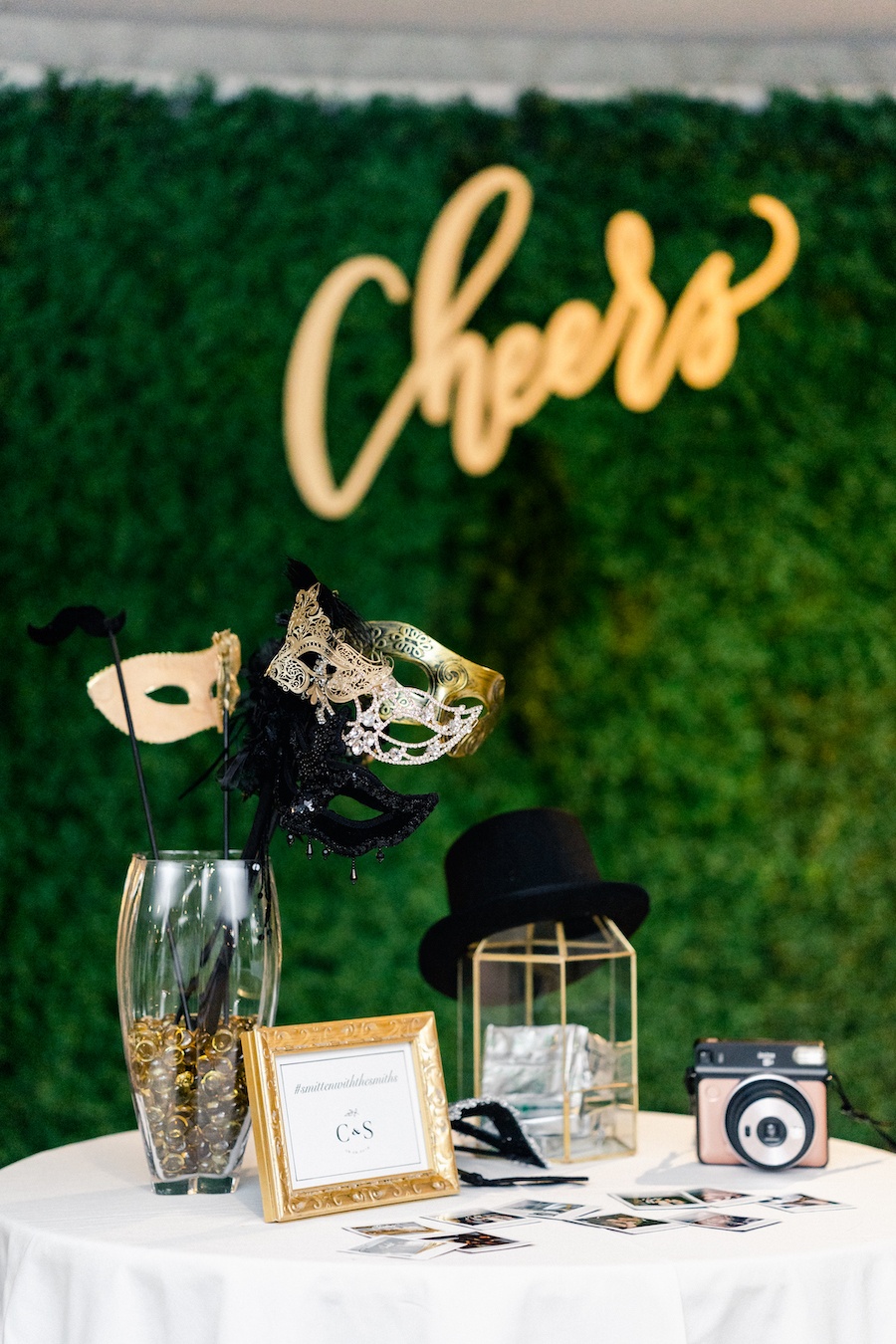 Caroline and Steven provided masks and a Polaroid camera so guests could pose
and snap away in front of a photo wall. 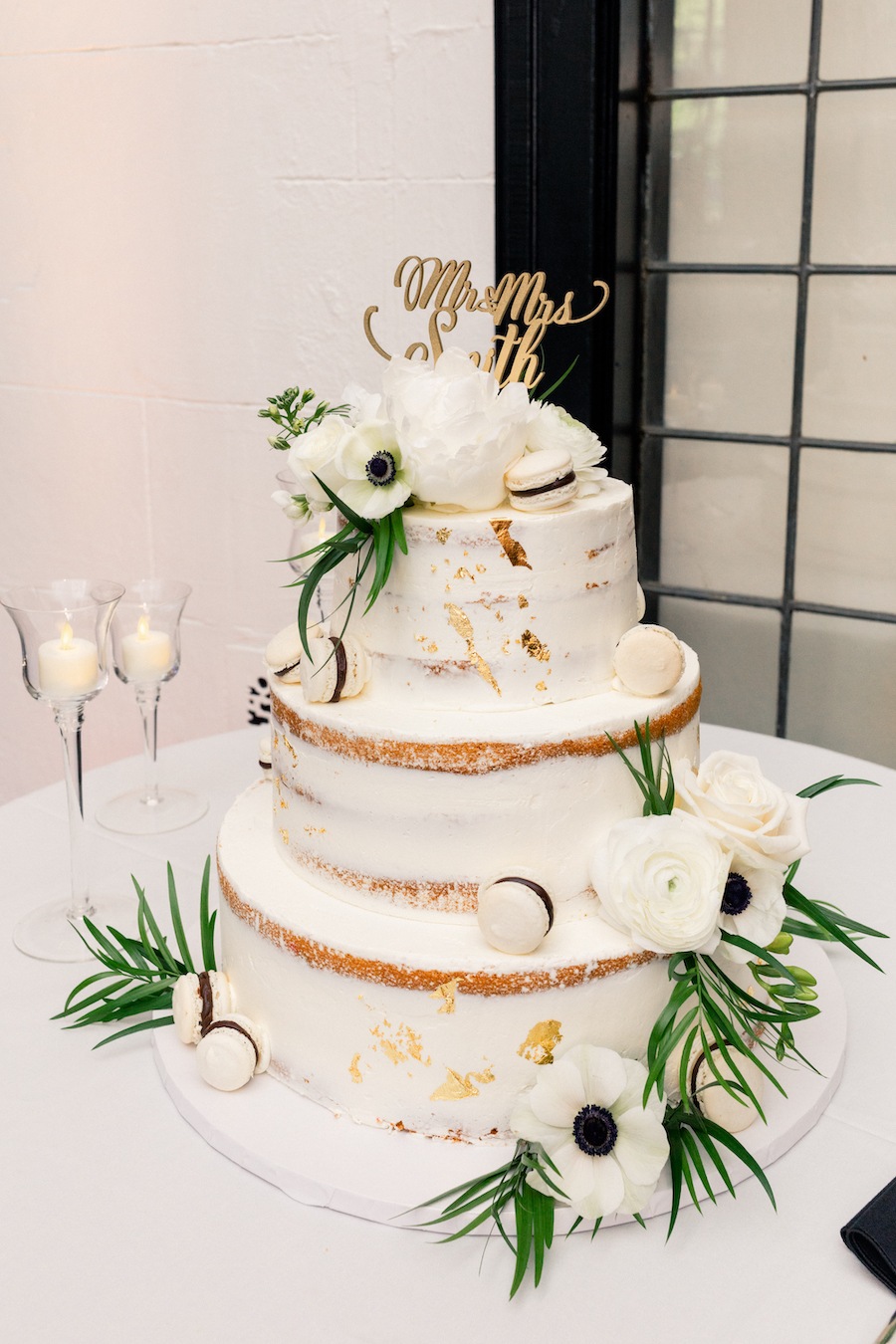 “I personally always wanted a funfetti wedding cake,” Caroline says. “Steve took some convincing, but we had a lot of fun at the cake tasting.” To match their décor, the couple decorated their cake with edible gold leaf, macarons (which they also gave as favors), white flowers, and greenery. 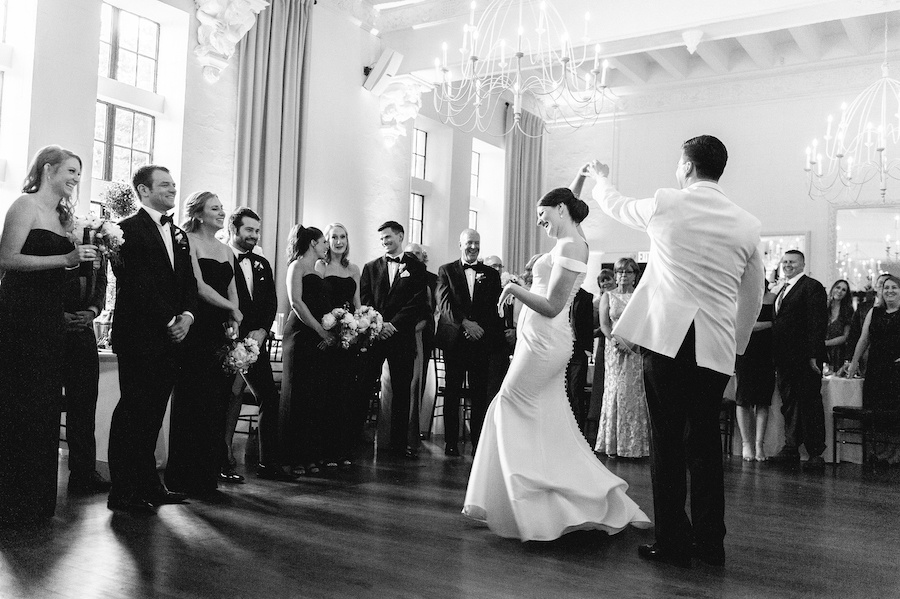 The bride and groom had their first dance to Elvis Presley’s “Can’t Help Falling in Love.” “It was really nice,” Caroline says. “We sang it to each other and we shed some tears. I think it was one of my favorite moments.”