Home on the Ranch

Like many of the other wide, low-slung homes that sprouted across suburbia after World War II, Mark and Melba Chin’s 2,000-square-foot Lexington ranch had a cramped kitchen, low ceilings, and a long central hallway that blocked natural light and created a warren of dark rooms.

Unlike many ranch owners, however, the Chins didn’t feel constrained by the simple one-story layout and modest square footage. They actually liked the home’s “ranchiness.”

“When we were house hunting a decade ago, we saw mostly two-story Colonials,” says Mark, a systems analyst, “but we liked the idea of living on one level. From a psychological perspective, there’s something to be said about being in one space and not being taken away from another.” 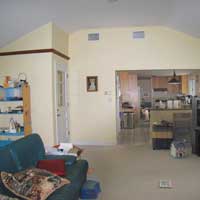 After nearly 10 years of living in overly partitioned spaces, though, the Chins decided it was time to open things up. Determined to avoid morphing their home into a Colonial by tacking on a second floor, they asked architect Barney Maier of Feinmann Inc. in Lexington to solve their space issues without destroying the structure’s horizontal orientation.

Unfortunately, zoning regulations wouldn’t permit the Chins to add onto the back of the house because of its proximity to a small stream. So Maier spent a year developing solutions without adding square footage. His proposal included relocating the eating area from the kitchen to the family room, and selectively removing sections of interior walls to improve the spatial flow. 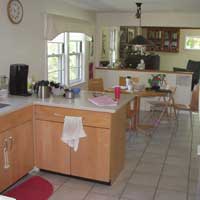 At first, many of Maier’s ideas seemed radical to the Chins. “We wondered whether we could completely give up the dining room,” says Mark. “The dining room table was a wedding gift—could we really give it away? And we didn’t know if it made sense to make meals in one spot and then go into another room to serve them.”

Once they adopted Maier’s vision—and got rid of the dining set—the rest of the renovation was easy. “The changes we made were not fundamental to the house’s structure,” Maier notes, “but they totally transformed the interior.”

Freed of the eating nook, the formerly cramped kitchen now has room enough for Mark and Melba to cook together without knocking elbows. Light pours in through the new bay windows, highlighting maple Corsi cabinets and a sleek quartz-topped peninsula where the Chins’ two grade school–aged daughters tackle their homework.

But that was only the beginning of the renovation. “In a ranch, you can’t help being in the middle of things,” Mark says. “That works well during the day because you don’t want the kids off where you can’t find them. But we also wanted to be able to watch TV at night without waking them.” 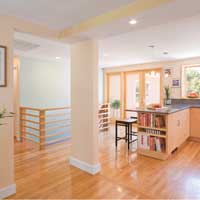 So Maier added glass-paneled sliding doors between the living room and family room to soundproof the space while maintaining the layout’s visual continuity. In addition, a sliding window between the kitchen and the family room helps Melba and Mark stay connected to the kids while cooking—and provides a table-setting shortcut.

Maier also removed portions of the living room walls to brighten the room up and allow the adjacent spaces to spill over into its generous floor area. The narrow entry seems much bigger, as guests are naturally drawn into the larger spaces. And now the kitchen feels more connected. 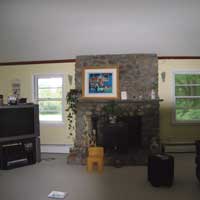 But the most dramatic change to the house occurred in the family room. The original stone hearth, which the Chins almost never used, was massive and uncentered. It engulfed the small room, making the space feel uncomfortably off-kilter. Rather than removing the stone chimney and fireplace, Maier hid them behind a new built-in maple entertainment center and shelving unit. “By leaving the fireplace intact,” he says, “we avoided a major cost and also preserved options for future residents.”

Maier built a bay opposite the entertainment center to frame a new banquette, and dropped the ceiling above the dining table to further separate the eating area from the rest of the family room.

All told, the Chins were surprised that Maier’s minimally invasive changes were able to radically improve the way they use their home, they say. They don’t miss in-kitchen dining, and they use the living room far more now than when it doubled as a dining room.

“At first, it sounded as though we would be losing a lot, but we really gained so much more,” says Mark. “We don’t feel crammed in anymore; we’re free to enjoy the space and each other’s company.”

The transformation even seems to have astonished Maier. “It’s surprising how readily a little tweaking can create excitement,” he says. “The project’s simplicity shows that the much-maligned ranch house actually suits modern living perfectly.”