Eric Höweler and Meejin Yoon may be the next big thing in the architecture world, but they act more like ambitious grad students. “We joke that we’ll take any project,” says Höweler, sitting at a small work table in their Leather District loft. “If someone comes in and wants us to design a bowl, we’ll design a bowl. If they want us to design a skyscraper, we’ll design a skyscraper. We’re curious enough to tackle just about anything.”

That intellectual curiosity, coupled with a fairly superhuman work ethic, has propelled the pair—a couple in both personal and professional life—to international acclaim. Best known for White Noise/White Light, a self-described “geeky” installation at the 2004 Athens Olympics featuring 440 fiber-optic stalks that lit up, hummed, and bent as people passed, they’ve also designed everything from skyscrapers to avant-garde clothing. Now they’re showcasing 28 of those projects in a book, Expanded Practice, out this fall from Princeton Architectural Press.

After meeting as Cornell undergrads in the 1990s, Höweler and Yoon, both now 37, worked for New York firms before settling in Boston and striking out on their own in 2005. By that point, the couple’s attention had focused on the intersection of electronics, architecture, and landscape.

“White Noise was an eye-opener for us,” Höweler says. “People played games and chased each other through it. The realization that architecture could be provocative—could actually provoke behavior— was not something we had thought about before.” Though the installation lasted a mere month, it led to a permanent project outside a Washington, DC, office building. Called LoRezHiFi, it’s a grid of 20 touch-activated sound poles that combine to create a huge musical instrument. From the corporate lawyers who work on-site to passing tourists, everyone stops to strum the poles.

Yoon also took time to explore fashion, taking the mathematical concept of a Möbius strip—a simple twisted loop that demonstrates the idea of infinity—and turning it into a dress of recycled felt. Like the strip, the Möbius dress twists and turns as one continuous loop around the body, turning inside-out as it unravels. 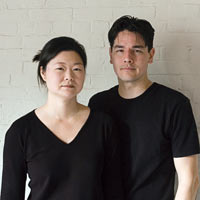 While they’re renowned for such highly theoretical design, Höweler and Yoon also busy themselves with the pragmatic work of creating office buildings. Höweler, who spent eight early-career years designing skyscrapers, assumed he was done with massive edifices when he joined forces with Yoon. For the first few years, they tackled cultural projects, including New York’s P.S. 1 Contemporary Art Center and New Jersey’s Meadowlands stadium. But when approached by a Chinese architect to collaborate on a pair of office towers in Nantong, a fast-growing city on the banks of the Yangtze River, the pair couldn’t resist.

“It’s obviously a very commercial project—not something that would earn credibility from the cultural point of view,” says Höweler. “On the other hand, I had a lot of know-how stored away and the prospect of applying that again seemed enticing.”

In addition to finishing the skyscrapers, the pair is simultaneously creating a courtyard for a mixed-use building in the Szechwan city of Chengdu; expanding a boutique hotel and spa in Tiverton, Rhode Island; and designing a private residence in McLean, Virginia.

In their seemingly nonexistent spare time, they “play” with what they call research—a habit that tends to produce books. Unimpressed with the Rose Kennedy Greenway, they wrote Public Works: Unsolicited Small -Projects for the Big Dig, a collection of 14 alternative scenarios that re-imagine the park.

Yoon also teaches at MIT’s School of Architecture and Planning; Höweler does so at Harvard’s Graduate School of Design. Packing everything in requires lots of 18-hour days, but Höweler says it’s the only way to work. “We strive to keep an open mind and remain agile,” he explains. “If we become specialists, I think we’re dead.”