How decades' worth of lost gear is jeopardizing the Massachusetts fishing industry. 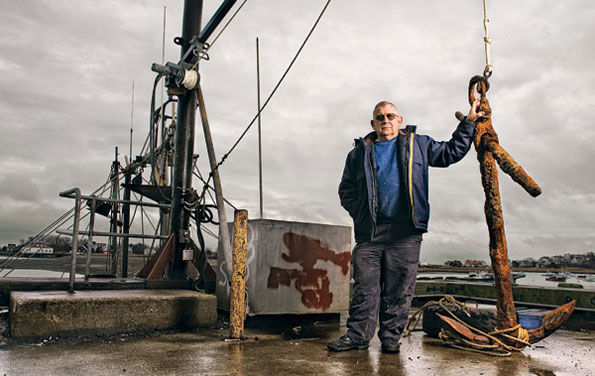 From the wheelhouse of the Barbara L. Peters, everything looks normal. The net goes taut behind the 55-foot fishing boat, and Scituate fisherman Frank Mirarchi starts to pull it in, hoping to find a big clutch of cod. As the net gets closer to the boat, though, Mirarchi sees something else.

At the back of the net hangs a mangled lobster pot, the prongs of its steel cage hooked into the plastic webbing like a burr in a sock. Mirarchi idles the wide-bottomed boat, puts on his work gloves, and heads out to the deck. His son Andrew has already laid the net down, opened its “window” — a hole that can be opened and closed to extract things that aren’t fish — and begun working the pot toward the escape hatch. Cod are flopping everywhere. Ten minutes later, the battered pot clangs to the deck. Andrew sews the window closed again, and then it’s back to fishing — until another hunk of abandoned gear gets caught in their net.

Today Massachusetts fishermen are hauling in trash and marine debris on nearly every trip, even in protected areas like the Stellwagen Bank National Marine Sanctuary — the 842-square-mile section of the sea just east of Boston Harbor that serves as a habitat for endangered species of whales. More often than not, the fishermen are pulling in “ghost gear,” or lost fishing lines, nets, and pots. Along with by-catch (the accidental catching of the wrong types of fish) and rising ocean temperatures (due to climate change), ghost gear is one of the major issues confronting the North American fishery in the 21st century. While hard stats are impossible to gather for the total amount of ghost gear littering the ocean floor, the few studies that have been done reveal the extent of the problem: One 37-square-mile area in Stellwagen Bank that’s known for good lobstering contains an estimated 61,440 pots, plus 457,000 pieces of rope and 7,680 nets. Another 198-square-mile sliver of sea floor was projected to contain a stunning 700,000 gill nets and 164,000 pieces of rope and fishing line — and that area has been closed to commercial fishing for more than 20 years.

For generations, fishermen wrote this off as simply the cost of doing business. They even dumped their old, busted gear into the water — better than hauling it ashore. But now, the profusion of ghost gear has reached a critical mass, and is actively hurting their livelihoods. And beyond the productivity that’s lost when fishermen like Mirarchi have to stop fishing to remove broken gear, there’s the fact that all that gear is still working: Unmanned nets and lobster traps continue to catch fish, which, instead of being harvested and winding up on our dinner plates, slowly starve to death. They, in turn, become bait for a new round of fish lured to their death. “What’s surprising,” says Bob Glenn, an aquatic biologist with the Massachusetts Division of Marine Fisheries (MDMF), “is that the traps will often continue to catch animals when the original bait is gone.”

Absent any new technique to identify and remove big collections of the gear, the ocean will turn into a denser and denser soup of nets, traps, and rope. “Just because [this stuff] is ‘out of sight, out of mind,’ ” says Ben Cowie-Haskell, assistant superintendent of the Stellwagen Bank sanctuary, “doesn’t mean it’s not a problem, [or] that it doesn’t exist.”

ARMED WITH FOUR GPS screens in the Barbara L. Peter ’s cabin and two plastic trawl nets on the deck, Mirarchi returns again and again to the same little ribbons of muddy and sandy bottom in the Stellwagen Bank sanctuary. Yet his fish-finding technology is blind to ghost gear. Wave action from nor’easters can toss and tangle lobster pots that are as much as 50 feet deep, creating pickup-truck-size balls of rope, pots, and nets that are like giant tumbleweeds blowing across the ocean floor. In lap after lap over the same water, Mirarchi can eventually skim an area clean of trash, but each winter, storms refill his lanes with debris and ghost gear — as much as 8,000 pounds per year. You clean it up, Mirarchi says, “then you start all over again. It never really ends.” 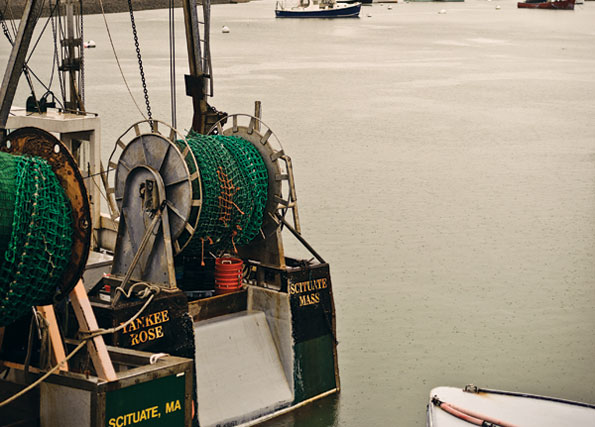