A Conversation with Metallica’s Kirk Hammett: On Horror Movies, Heavy Metal, and a Frankenstein Bong

The Peabody Essex Museum is premiering "It's Alive! Classic Horror and Scifi Art from the Kirk Hammett Collection." 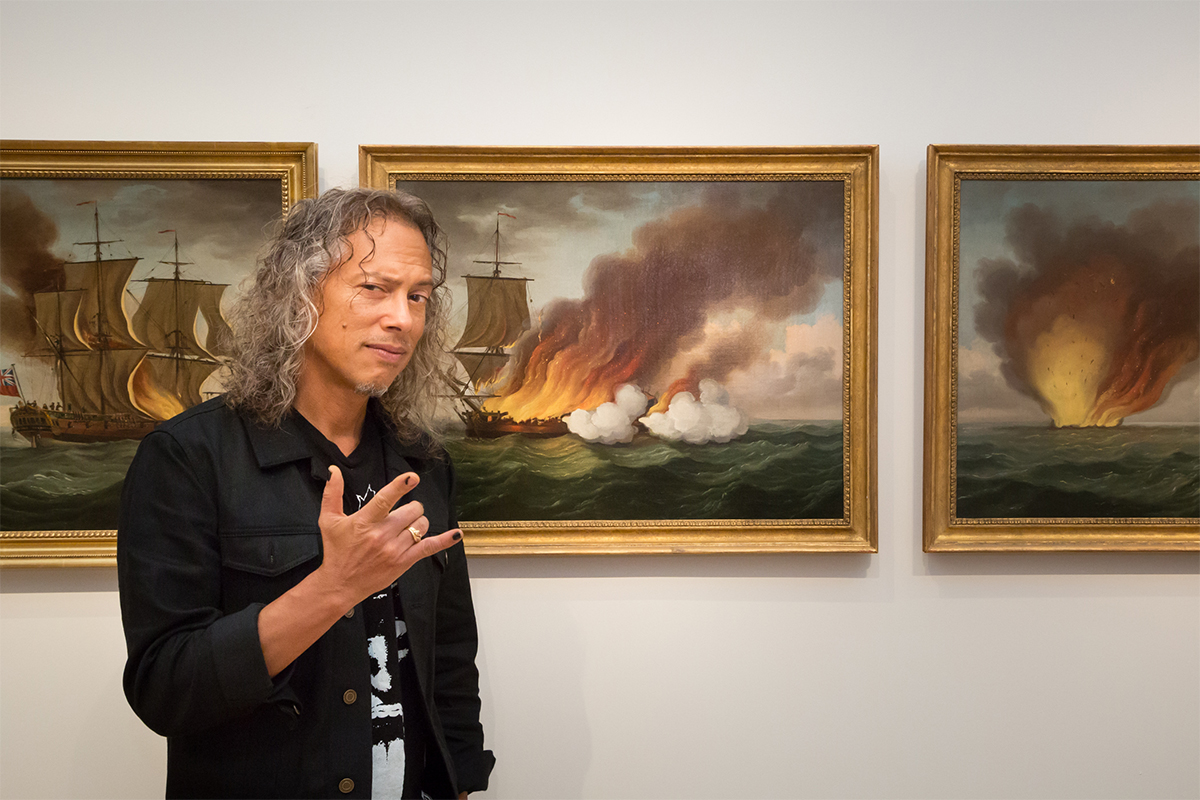 When the Peabody Essex Museum opens the “It’s Alive!” exhibit this Saturday, visitors will be thrilled and chilled by its nearly 100 horror movie and sci-fi movie posters and lobby cards. But rock fans will also gravitate to the eight guitars on display – after all, they’re some of the favorite axes belonging to Metallica lead guitarist Kirk Hammett. In fact, the whole show comes courtesy of the Rock & Roll Hall of Famer: When he’s not selling some 110 million albums in his day job, his hobby is amassing one of the world’s largest and finest collections of creep-show memorabilia. Before I sat down with Hammett at the museum to discuss “It’s Alive!,” I knew he was the guy who once wrote the massive riff to Metallica’s biggest hit, “Enter Sandman,” at three o’clock in the morning. What I discovered in person was an amiable guy who chats excitedly about finding 26 issues of a rare monster magazine in a comic book store.

Anyone who has followed your career knows that horror and sci-fi movies have long been a passion of yours. But for those who don’t know, what role did your immersion in these genres play in your life as a kid?

For me, the horror genre took me over at a young age. I was five years old when I saw my first horror movie, and from the onset it was like discovering an entirely different world out there that I never knew existed. It was just something that made me feel incredibly safe, comfortable, inspired. Over the course of time, as a child, I got more into reading books on horror, monster magazines, horror comic books—that was during the ’60s horror toy craze. I was a sponge and soaked it all up.

For most people, of course, horror gives you nightmares, but everything I’ve read about you is that it did the exact opposite.

It’s funny that you mention that. I think I’ve had maybe five nightmares in my entire life, and almost all of them have been in my adult life. I can never ever remember ever having nightmares my entire childhood, or my teenage years…It’s really strange, you know?

How did it start to coalesce with your interest in music?

Horror’s largely visual, but when I discovered hard rock and progressive rock—bands like Deep Purple, Black Sabbath, Led Zeppelin—all of a sudden it was an audio experience of what I loved. The entire time that I’ve been a musician, I’ve still been into horror, and there’s this huge witches’ brew inside of me, all this dark, evil, foreboding music that comes from my own creative tendencies and impulses.

Joni Mitchell and Miles Davis both have painted as an artistic release, separate from the music. In your case, though, it sounds like this is not a respite from music but deeply involved with it.

There’s a synergy that happens inside of me. I sit in front of my movie posters and play guitar, and I create kind of a mental feedback loop between what I’m seeing, how I’m feeling, what I’m playing, and what I’m hearing out of the amp. Then I’m in a state of bliss. And you know, with every room of mine that has movie posters, you’ll find guitars and amps and a recording device. That’s been my M.O. ever since I started watching horror movies and ever since I decided to become a musician. My enthusiasm is just as great as it was in 1983, 1997, 2011—it’s just never waned.

This is a pretty generous exhibit, but I also know it’s the merest tip of the iceberg. How large is your collection?

You know, you’d have to talk to my curator. I actually have a staff of people responsible for the management, transportation, and preservation of my collection. As for the movie posters, the best stuff is in my book [2012’s coffee-table tome Too Much Horror Business], and the best stuff from that will be in this collection. The toy collection is endless, and all the related ephemera just goes beyond.

You mean the marketing tie-ins that have always gone with movies?

Yeah, anything from an action figure, to a cardboard popcorn cup that was only available in the Midwest in the ’70s that had monster graphics on it, to Pez dispensers. Or a creature aerator that goes in an aquarium – that’s one of my favorite pieces. I bought a Frankenstein bong once, because I was walking down the street one day in New York, and I saw this really cool Frankenstein head with this glass tube coming out of it. I thought, “That’s preposterous, I love it.” I ran in and bought it, and  it just sits on the shelf, along with everything else.

Do you have a group of collector friends, that you share information with?

I have one main guy, who’s my field archaeologist. He’s also my deflector, because I would love to do all this collecting myself. There was a time I did all that myself, back in the ’80s before the Internet, when all correspondences were done by writing letters or getting on the phone for hours sometimes. But nowadays, I need someone who is neutral, because if people know that it’s me, then the whole dynamic changes. Celebrity tax gets added on, and depending on the person and what type of personality they have, it can go from being a really simple process to a really complicated one.

Releasing your collection to the public eye certainly reveals a private part of your life. After all, people will be looking at something that you’ve spent hours studying in your house.

Oh sure. I kind of changed the day I decided to do the book. I went from being a really insular, very guarding sort of collector to just throwing the doors open for the world to see, with arms outstretched and a big welcoming invitation.  My collection is matured, it’s grown up, and it’s time for it to just go out into the world and stand on its own. I feel like a proud parent!

And of course, we in Massachusetts are very excited to have you come all the way east to do it.

I think Salem is the perfect place.

It’s the Most Haunted Town in America!

I love it! I’m so happy to be here, I couldn’t pick a better place. It’s an obvious thing!

What do you think the scene is going to be like here on Halloween?

Ohhh…I wish I could be here. [Editor’s note: Metallica will be touring Europe at the time.] I hope that it would be as ghastly as possible, and as celebratory as possible. It will probably come to you as no surprise that my favorite holiday is Halloween.

What do you think is the most “metal” horror movie, and conversely, what is the most “horror” Metallica song? And by a “horror” song, I don’t just mean the subject matter, but that feeling of dread and elation you’ve been talking about.

I like that, that’s a good question. Well, the first horror movie that pops into my mind is Tetsuo: The Iron Man [the 1989 Japanese cyberpunk cult classic about a man whose body transforms into scrap metal]. That film, obviously, is just full-on metal! [laughs] Even though it has an industrial soundtrack, it is metal to the core. Also I think that Hellraiser is like sick death metal to the extreme.

As for the Metallica song, I’m biased, because I know a lot more about these songs than just your average person. But I would say “The Call of Ktulu” and “The Thing That Should Not Be” and “Dream No More.” That’s the trifecta of H. P. Lovecraft-inspired heavy metal, brought to you courtesy of Metallica. It is just like the perfect evil trinity of heavy metal. I would say that “Enter Sandman” has its horrific elements, since nightmares are fertile ground for the basis of a lot of horror, so I have to throw that one in there for good measure.

There’s also the Lulu album you did with the late Lou Reed. His lyrics about sex and murder are completely disturbing, and the whole vibe of that record seems to fit what you’ve been talking about here.

When we started doing that album with Lou Reed, Lou kept on making these horror movie references. He was talking about Nosferatu or The Island of Lost Souls. When he came over to my house, he was amazed. [yells in a gravelly Lou Reed voice] “OH MY GOD KIRK! THIS IS A MUSEUM! I LOVE IT!” And you know, not long afterwards, I got the call from [Peabody Essex Museum curator] Dan Finamore, for all this to be set in motion.

I had another real close friend who was also into this stuff, and that was Johnny Ramone. I would come over to his house, and we would talk as much as eight hours. I miss Johnny. [Editor’s note: Ramone died in 2004.] There are only so many people I’ve ever met in the music industry who share the same sort of passion. One of them was Johnny Ramone, the other one was Lou Reed. And sadly, they’re not around to see this exhibition. They had loyalty to this passion that we shared, and they took it to the end. And I hope to do that too.