Eight Massachusetts Movie Locations to Visit on a Day Drive

From the Knives Out mansion to an abandoned state hospital, explore these famous film sets—then hunker down with some popcorn. 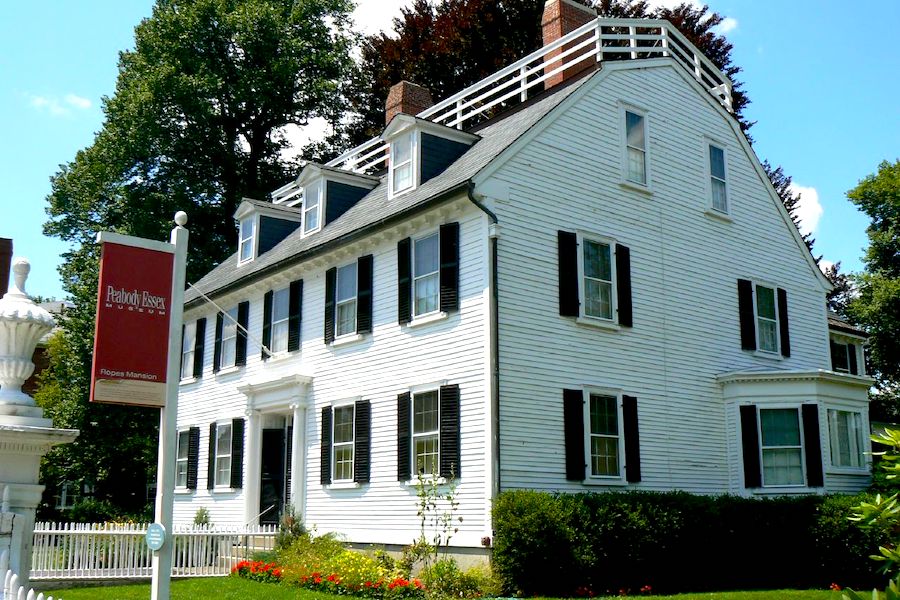 The Ropes Mansion in Salem was famously featured in the 1993 movie Hocus Pocus. / Photo by Nick Ares on Flickr/Creative Commons.

It is day blursteenth of the social-distancing era—and if there’s one thing that bored, isolated Bostonians have learned by now, it’s that movie marathons and long car rides are two of the few diversions that have remained solidly pandemic-proof. (Small mercies!) As someone who greatly enjoys wasting both time and gas money in the pursuit of escapist entertainment, this got me thinking: What if Boston combined the two, and compiled a list of day drive-friendly destinations featured in Massachusetts-made films?

Bingo. Your latest weekend itinerary, and Netflix queue, was born.

It was hard to pick just a few locations, given how the Bay State has become a much more popular town for movie-making over the last decade or so. That said, we’ve steered clear of all those accent-heavy films shot mainly in Boston (see: The Departed, Ted) in favor of flicks that lensed in the ‘burbs—and, ideally, offer some other entertaining reason to visit. Without further ado: Please silence your cell phones, except for the GPS, and settle in for the ride. Oh, and don’t forget to hit the car wash—they’re open again, after all.

The Ropes Mansion in Salem — Seen in: Hocus Pocus

Address: 318 Essex St., Salem
Distance from Boston: 21 miles
Just before everything went sideways, millennials received the news that some of us have been waiting on for 26 Halloweens: Hocus Pocus is getting a sequel. It’s unknown if the original’s star trio—Bette Midler, Sarah Jessica Parker, and Kathy Najimy—will reprise their roles as the witchy Sanderson sisters, last seen wreaking havoc on Salem, Massachusetts in 1993. We do know, however, that a trip to the spellbinding seaport is a goldmine of movie locations: Old Town Hall was the setting for a massive dance party, a now-apartment complex was captured in its former life as an elementary school, and the Ropes Mansion, a Peabody Essex-owned property built sometime in the 1720s, was the character Allison’s extremely impressive home. The mansion is probably the most Instagrammable option, and make a note to return post-pandemic: It’s open to self-guided tours in normal times.

First Parish Church in Cohasset — Seen in: The Witches of Eastwick

Address: 23 N Main St., Cohasset
Distance from Boston: 26 miles
Here’s another entry in the list of iconic girl-groups who still make us scream “werk, witch!” In this dark comedy from 1987, Cher, Michelle Pfeiffer, and Susan Sarandon team up to cast spells and turn the tables on a chauvinist jackass played by Jack Nicholson, who is in full smarmy-mode as a self-described “horny little devil” (figuratively and literally). In one particularly memorable, stunt-filled scene, Nicholson is dramatically blown through the streets of town and into a church—that’s the First Parish Church in downtown Cohasset, which enchanted producers with its Anywhere, New England feel. (Eastwick is actually a fictional town in Rhode Island.) While you’re there, order a curbside croissant from French Memories patisserie, and take it for a stroll to soak in the quaintness.

Address: 45 Hospital Rd., Medfield
Distance from Boston: 29 miles
Back when people did things like go to the movies, the Coolidge Corner Theatre’s After Midnite program, curated and hosted by cult-film connoisseur Mark Anastasio, was one of my favorite reasons to stay up late. In May, the series was supposed to stage a pop-up screening of Shutter Island on the grounds of the abandoned Medfield State Hospital—where scenes from the Martin Scorsese psychological thriller were filmed. A certain pandemic prevented that (a rescheduled date is TBD), but you can still check out the grounds yourself: They’re publicly accessible, and very cool, in a creepy-pretty, haunted-New-England way. I’m still looking forward to a future on-set experience, but in the meanwhile, Leonardo DiCaprio looks just as good at home.

The Ames Mansion in North Easton — Seen In: Knives Out

Address: 259 Massapoag Ave., North Easton
Distance from Boston: 30 miles
Knives Out was a refreshingly grown-up whodunit comedy when it snuck into theaters late last year, as well as a smart lampooning of rich white people who “voted for Obama!” but think more like Trump. (You know a few on Nantucket.) The dapper but dysfunctional Thrombey family’s handsome, Brahmin-esque estate is where much of the detective-work takes place. And while the exterior of the mansion is a private home, the interior scenes were shot inside the Ames Mansion at Borderland State Park, a picturesque plot with 20 miles of wooded trails for hiking or biking, plus ponds for fishing. The house is normally open for tours; hopefully those will resume by the time it’s sweater weather. (Also, if you have $1.4 million laying around, the modernist Lincoln home owned by local-boy Chris Evans’ character was recently placed on the market.)

Woodman’s of Essex in Essex — Seen in: Grown Ups

Address: 119 Main St., Essex
Distance from Boston: 32 miles
Guess who got one of Massachusetts’s most famous seafood restaurants to close for one of the few times in its century-long history? If you guessed Adam Sandler, you’re correct, and we are just as surprised as you are. Turns out, the New Hampshire native wanted Woodman’s of Essex to serve as the setting for a dinner scene in Grown Ups, the 2010 comedy he cowrote and starred in, alongside a bevy of other Saturday Night Live alums. The North Shore landmark obliged, shutting its doors to the public (for five days!) in the month of June for the first time in 95 years. Luckily, the restaurant is open for curbside takeout right now, and having recently gorged on its fried clam strip roll, I can confirm: It’s very worth the ride, all on its own.

Address: 61 Lowell Rd., Groton
Distance from Boston: 41 miles
Even when we’re not itching to get out of the house, Gibbet Hill Grill in rural Groton is another dining destination that we heartily endorse. Chef Brendan Pelley, who previously excited Boston’s dining scene with his Greek pop-up, Pelekasis, as well as a stint at the now-shuttered Doretta Taverna, has been doing amazing things with ingredients grown on-site at the property’s bucolic farm. The rolling green pastures also make for a popular wedding venue—so it’s appropriate that they served as the setting for a proposal scene (between Laurie and Jo) in last year’s acclaimed Little Women adaptation. Check it out while you’re falling in love with Pelley’s steakhouse-oriented take-out menu, which includes large-format platters for family dinners, plus grocery items such as pre-portioned and marinated chops.

Lighthouse Beach in Chatham — Seen In: The Finest Hours

Address: 30 Main St., Chatham
Distance from Boston: 93 miles
Beaches are back under Phase One of the reopening, so a socially-distanced day-trip to the Cape is still a summer tradition you may be able to experience. One possibility: Lighthouse Beach in Chatham, where stormy waters once required the daring sea rescue of the crew of the SS Pendleton tanker. The super-dramatic 1952 incident went down in Coast Guard history and was portrayed in The Finest Hours, a 2016 dramatic thriller starring Chris Pine and Casey Affleck; it’s based on a book by Massachusetts authors Michael J. Tougias and Casey Sherman (who recently shared a very different Cape Cod-based story, of the true crime variety, with Boston). The beach, and its recognizable light station, cameo in the movie—and though the remains of the Pendleton remain submerged at sea, the propellor from the rescue boat is actually displayed at the beach parking lot.

Address: 981 Northfield Rd in Hinsdale, NH
Distance from Boston: 99 miles
Only a handful of old-school, outdoor movie theaters remain in New England, and as someone who grew up down the street from the Mendon Twin Drive-In, I am firmly in favor of the medium’s—dare I say!—burgeoning renaissance. If you’ve never attended a retro-style screening under the stars, now is certainly a fine time to experience such good, wholesome, well-ventilated entertainment, and the Northfield is an appropriate place for it. After all, it not only shows movies, it was in a movie: The Cider House Rules, an Oscar-winning 1999 drama that gave the drive-in a decent amount of screen time. First, watch the World War II-set film starring Tobey Maguire and Charlize Theron. Then, watch something at the Northfield—which, yes, officially has a New Hampshire address. Still, the drive-in’s property on the state borderline spills into Northfield, Massachusetts, so on that technicality, Rules meets the rules.