The Philbot helps fourth grader Philip Lippolis keep up with the class. 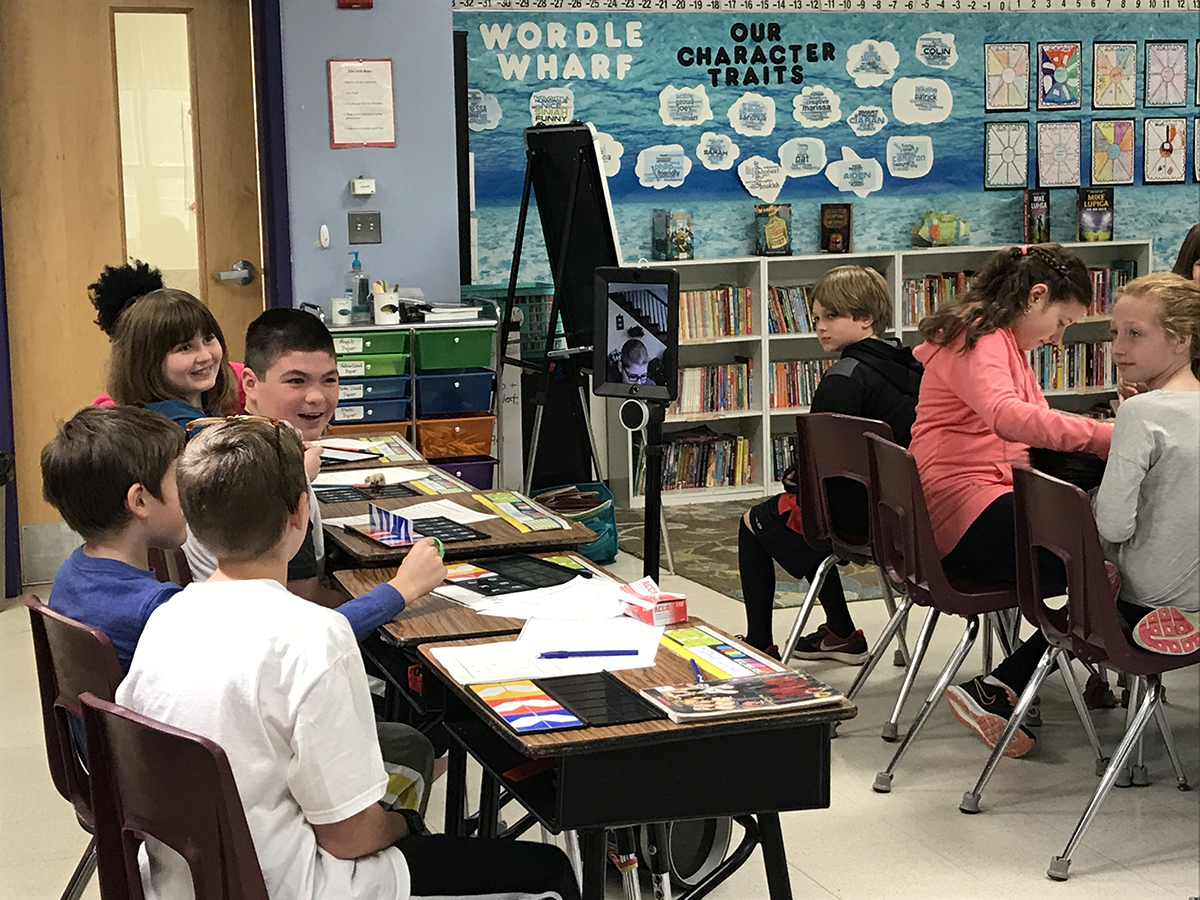 Philip Lippolis is an upbeat fourth grader at Walpole’s Boyden Elementary School. He loves science, and swears he enjoys going to school each and every day.

The only difference between Philip and his classmates? He’s immunocompromised and homebound while recovering from leukemia, so he “commutes” to school via robot.

“Before I got the robot [in January], I was really depressed because I really wanted to go to school,” he says. “It helps a lot. If it weren’t for the robot, I wouldn’t be in school for all these months.”

Philip, 11, can control the robot, nicknamed “Philbot,” remotely through his tablet, driving it all over the building each day. Through the tablet’s video chat function, he can see what’s going on in class—and equally important, his friends can see him.

“These kids now have seen somebody go through cancer treatment, and understand that change happens and this is real life,” says Philip’s teacher, Cheryl Ivatts. “They’ve grown so much just by seeing what happens. It’s definitely taught them compassion, it’s taught them character building.”

Philip was first diagnosed and treated for leukemia in first grade, and was forced to miss an entire year of school. When his treatment began again in October, Ivatts was determined not to repeat history.

She started Facetiming with Philip during the school day, first on a phone and then on an iPad. Eventually, she was carrying the iPad all over school using a neck strap, just so he wouldn’t fall behind.

But Ivatts began to wonder if there was a better way. Finally, another student’s mother posted about the situation on Facebook. As it happened, she was friends with someone at Grahamtastic Connection, a Maine-based organization that puts technology in the hands of hospitalized children. That contact got the ball rolling, and eventually the Ronald McDonald House Charities of Eastern New England awarded Grahamtastic $15,000 to make a customized robot just for Philip.

The impact, says Philip’s grandmother and guardian Jean Allen, has been enormous.

“He can interact with the class, he can raise his hand, he can give book reports, he’s even been on the stage [during an assembly],” Allen says. “He’s part of the class, and he’s not missing anything. This is such a relief to me that he’s not going to stay back—he’s going to go to fifth grade.”

While Philbot keeps Philip involved and engaged with his class, Ivatts still visits his home multiple evenings per week to make sure he’s keeping up, and that he has all the necessary materials for the week’s lessons. She shrugs it off, saying it’s simply part of the job.

“You give [your students] 100 percent of you,” she says. “With Philip, 100 percent just looked very different than the other kids who were sitting right in front of me. I never took him off my radar. He was always still my student.”

Even still, the Boyden community is eagerly awaiting next January, when Philip’s immune system will be strong enough for him to return to school. Philip, of course, is looking forward to that moment most of all.