Tufts and Nurses Have Reached a Post-Strike Deal

The hospital and union agree on a contract five months after an historic strike. 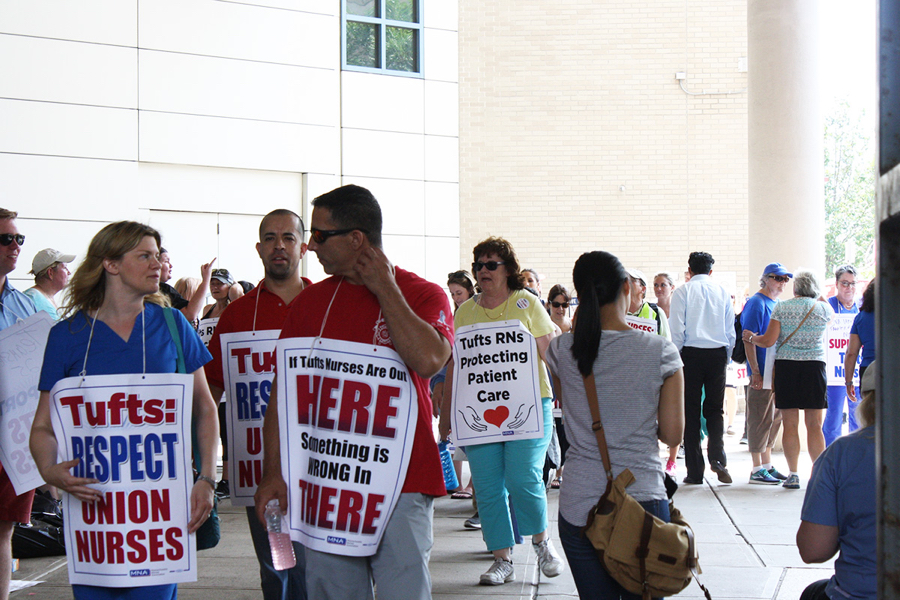 Five months ago, they walked off the job, triggering a five-day lockout and launching an historic strike—the first of its kind in 30 years. Now, they have a deal.

Tufts Medical Center and the union representing its nurses say they have finally come to an agreement on a 3 year and 9 month contract after a meeting held at City Hall brought the testy dispute over wages and benefits to an end. According to the Boston Globe, nurses will get a guaranteed 6 percent bump in pay over the next 3 years and 9 months, on top of the existing 5 percent annual increases most nurses get, and Tufts has agreed to contribute more to the nurses’ new retirement benefits. The agreement will still need approval from union membership, and a vote is scheduled for January 3.

Pressure had mounted on the hospital after a high-profile one-day walk-out in July, which was followed by four heated days in which the nurses were locked out and their jobs filled by replacement workers. Striking nurses were often joined by politicians—including Boston Mayor Marty Walsh and his opponent in the 2017 election, Tito Jackson. Walsh offered City Hall as a venue for this latest successful round of negotiations, but did not play a role in them, according to the Globe. He had offered to step in as a mediator if need be.

It’s been a successful run for unionized workers in Greater Boston recently. Food service employees at Harvard went on strike for better pay and benefits last year, stopping work for three weeks, and won. Peers at Northeastern, inspired by their success, threatened to follow suit this year and came to the precipice of a walkout, and then got what they wanted. So did nurses at Brigham & Women’s, after threatening to strike in 2016.

Considering how damn angry Boston’s nurses are, they might not be the last.