Gyms in the state were given the green light to reopen on July 6. But for some, the reopening guidelines are anything but hopeful. 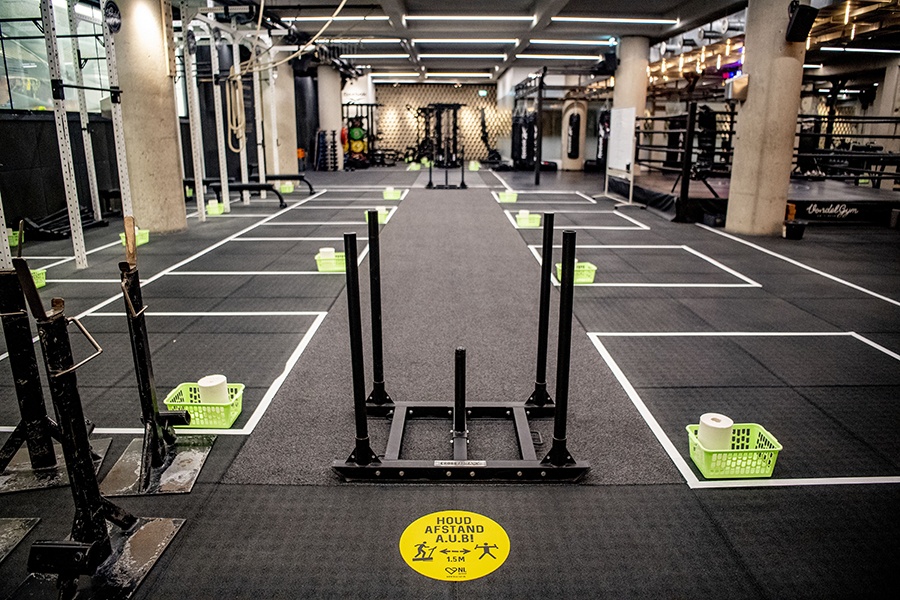 It’s been a hell of a ride for gym and fitness studio owners in and around Boston during the past four months as they navigated a prolonged closure during the coronavirus pandemic. And right at the point where many of them were in desperate need of a hail Mary pass from the government, they say Governor Baker’s phase three reopening guidelines are, instead, a tall order to follow.

Under Baker’s multi-phase reopening plan for the state, gyms and fitness studios of all sizes and classification were listed under phase three. Along with movie theaters, museums, and casinos, gyms in the state were given the green light to open on July 6, while those within Boston and Somerville city limits were ordered to wait until July 13. Under the restrictions the state released, occupancy can’t exceed eight people per 1,000 square-feet (a number that includes staff) and equipment and participants need to be at least 14 feet apart unless a barrier is installed, in which case physical distancing can be reduced to six feet. Face masks need to be worn at all times, unless it becomes unsafe to do so, and lockers, showers, hot tubs, etc. are closed until further notice. Also, no equipment can be shared between clients at the same time.

Mike Boyle Strength and Conditioning in Woburn reopened its doors on Monday, and owner and founder Mike Boyle said via email that it was a tough day—even inside his behemoth gym, which tops out at nearly 23,000 square feet. “14 feet between stations is a bit extreme,” he said. “It’s more than double the required ‘mask-required’ distance for other businesses. I really feel for places with less square footage than we have.”

Kevin Cann, owner and founder of Precision Powerlifting Systems, was forced to shift his business online, although he says he has lifters outside the city returning to gyms and he himself will train at Olympia in Peabody. “I’m a big fan of the government guiding [in terms of reopening], not dictating,” he tells me.

And the strict restrictions aren’t the only problems gyms will face. With cases across the country surging in places like Florida, California, and Texas right at the exact moment phase three in Massachusetts was enacted, many gym-goers are even less apt to hit the gym than they were before. Boston contributing writer Asia Bradlee is a client at VIM Fitness in Cambridge, which opened its doors on Monday under a two-stage plan requiring temperature checks, masks, and 14-foot distancing until they’re able to install Plexiglas partitions. Even then, Bradlee says she isn’t too sure about returning, telling me via text that she’ll wait it out just a bit longer to see how things pan out.

But while some owners flounder for a scrap of normalcy from the pre-COVID era, some are taking the changes and running with them. Elise Caira, owner of Sweat Fixx, won’t open until July 20, but says she’s taking matters into her own hands. She’s avoiding the extra cost of buying barriers and building all her own so that she can maintain some type of functioning capacity (which she calculates as somewhere from 8-12 people per class) in her studios. It doesn’t reach anywhere near the 30 people classes she would normally have in her Southie space, but it’s better than others are able to make room for. Strength coach Jessie Burdick says she’s taking her small business, Jburdie Fitness, outside the structure of a traditional gym to a small studio located inside an eclectic building of other entrepreneurs (including an architect and artist) in Medford so she can see one-on-one clients and small groups.

Any way you shake it, the gym experience is going to be different. Virtual fitness is now the norm, not the exception, and you can go ahead and say sayonara (and good riddance) to the days of 6 a.m. and 6 p.m. crowded gym hours. And if I were to guess, there may come a day when we’ll only see corporate gyms (and those who own large warehouse spaces in the ‘burbs and one-on-one businesses in the city) standing. For the gyms that can’t pull themselves out of astronomical rent debt and throw open their doors, it won’t be for a lack of trying or innovation, it will be because the industry is now being forced to change drastically. The only question remains, whether you’re a gym owner or a gym goer, are you willing to change with it?