Go Hard and Stay Home? As Gyms Prepare to Reopen, Fitness Fanatics Are Unsure about Returning

After Governor Baker's plans to reopen Massachusetts were announced Monday morning, gyms were included in phase 3. Will we even want to go back? 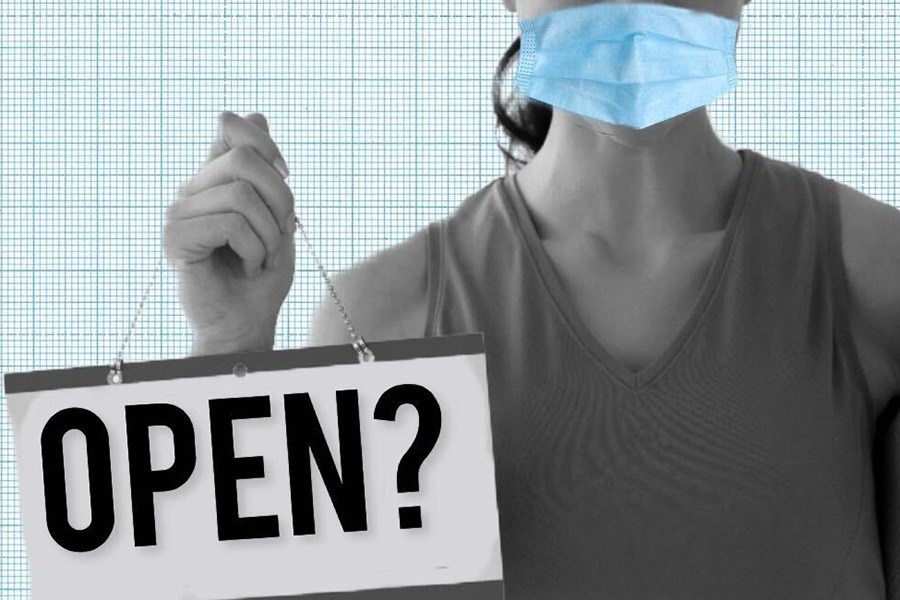 After a lot of anticipation, the details of Governor Baker’s plan to reopen the Massachusetts economy were revealed on Monday, with gyms and fitness studios getting included under Phase Three.

Phase One, which includes places like hair salons and car washes, plus some business offices outside of Boston, starts on May 25. Phase Two, which includes restaurants, retail, and nail salons, tentatively starts on June 8. Right now, there’s no announced start date for when Phase Three could begin, and Baker has made clear that the state could still shift back to earlier stages of the plan if cases start going back up again. But regardless of when Phase Three happens, we already know there’s a long road ahead before anything approaching business as usual returns.

Even as I sit down to write this article, I’m toggling between Twitter and a beautiful new barbell on RogueFitness.com. And, more unusually for me, I’m weighing strangers’ opinions on the internet against my own internal conflict over whether I should even start up my gym membership again when social distancing measures are lifted, or forget traditional gyms entirely and start building out my own home gym. For this #gymlife gal, I never could have imagined a life without the gym. But after being forced into a gym-free lifestyle for going on three months now, I’m actually starting to enjoy it. And I found other Bostonians are experiencing the same thing, after I asked people about it on Twitter.

Some people have even found it easier to stick to a fitness routine during quarantine, like Jessica Chahanovich, who writes, “I’ve had a gym membership and never went. I’ve been working out more during quarantine.” Some people said they weren’t planning on going back to a gym membership because they don’t want to pay for the amenities they wouldn’t be receiving at upscale places like Soul Cycle and Equinox. Others have committed to at-home workouts, like Shawn Johnson, who simply writes, “No, I’m sticking with the Peloton at home.” New converts to the convenience and accessibility of online classes or virtual training systems like Peloton and Boston-based rowing company Hydrow were common among the responses. Bruce Smith, founder of Hydrow, says the company has seen a five time increase in sales since January—they’re even hiring in their Cambridge office.

How fitness studios handled the shutdown may also play into people’s decision-making around restarting their memberships, as in the case of Boston Sports Clubs, which laid off all staff and refused, initially, to let members cancel memberships. “Based on how BSC handled everything in March, I’m a lot more likely to cancel and just work out outside,” Melanie Prior says.

Other respondents admitted they were just downright scared of enclosing themselves in tiny studios or big rooms of people sweating, grunting, and touching everything in sight. Even people who were trying to help their favorite local studios during the shutdown were experiencing some second thoughts about going back. As Samantha Washburn put it, “My gym is locally-owned, so I’m keeping my membership for as long as I can do so, but I don’t love the idea of working out in an enclosed space.” And unfortunately, the Phase Three information does not provide any kind of restrictions and guidelines that gyms will have to follow to ensure the safety of their clients.

That hasn’t stopped gym and fitness studio owners from taking matters into their own hands. Jess Fracalossi, owner of the Handle Bar spin studio, has started a manual for all boutique fitness owners to consult on cleaning and social distancing protocols. Other places, like AMP in Downtown Boston, say they’re ready to go as soon as they get the go-ahead. “I ultimately think it will depend on how strict the restrictions are to see if it even makes sense to open that early,” Steve Bergeron, co-owner of AMP says. After surveying their own members about returning to the gym in the near future, though, he says a majority of them weren’t interested in coming back soon, and some likely won’t come back until there is a vaccine.

Local writer Miles Howard (who is a Boston contributor) is in this camp. “There’s no way in hell I’m going back to the gym until there’s a vaccine,” he writes to me in a private message on Twitter. “I used to be in the gym 4-5 days a week, but I’ve since transitioned to walking and hiking locally, yoga, and resistance band workouts at home. That’s my M.O. for the foreseeable future.”

But there are always going to be people who want the in-person gym experience. As Hydrow’s Smith sees it, there’s a subset of people who are die-hard fitness goers and they’re going to run (not walk) back to their favorite places as soon as the time comes. That certainly rang true with many of the responses from my informal Twitter poll, with people saying things like, “Hell, I’m going back to the gym ASAP” or “I can’t wait to go back to my beloved Equinox. I’ll be the first one there. Virtual fitness? God no!” Or as Twitter user Justin Thayer wrote in response to one of the other fitness fanatics, “Right!!! I’ll be waiting in line outside the door just to hug the rowing machine. Lol.”

On the other end of the spectrum, Smith says a bigger subset of people are realizing the current situation is a good set-up. “They’re having this experience where work and working out at home are going really well for them,” he says. “In the same way they’re saving by not going out or commuting, they’re doing the same by not going to a gym.”

Many Twitter respondents are taking a more cautious approach. Jorge Andrés Treviño says he’ll continue to work out outdoors until it starts getting cold again. “After that, I’ll reevaluate depending on how things are going,” he says. “I have been working out twice as much during quarantine.” Nikki Torday writes that she plans to wait until things are extra safe. “I’m everyone’s immune-compromised friend,” she explains. But even she is missing the atmosphere and community traditional gym set-ups embody. “Once it is safe, I will be going back. I miss my work out friends and working out in the studio,” she says.

The question of what a COVID-safe gym looks like remains an open one, but it does seem people are reconsidering what their fitness routine will look like. As for myself? I ended up purchasing the barbell. I should expect it within 7-10 business days. Which is a hard and fast deadline I wish someone could give me on gyms reopening. And maybe that’s really my main hang up—the lack of control and fluctuating uncertainty I have regarding when gyms will open and if I’ll be ready to walk through the door when that time comes. I hope to return one day, but with so much unknown about pretty much every aspect of my future, I would like one thing to be clear in the meantime: when, where, and what time I can get my hands on some iron.