Why Is There No Swimming Allowed In Jamaica Pond?

The peaceful park draws joggers and walkers every day, but we wondered—what's the real reason you're not allowed to swim in it? 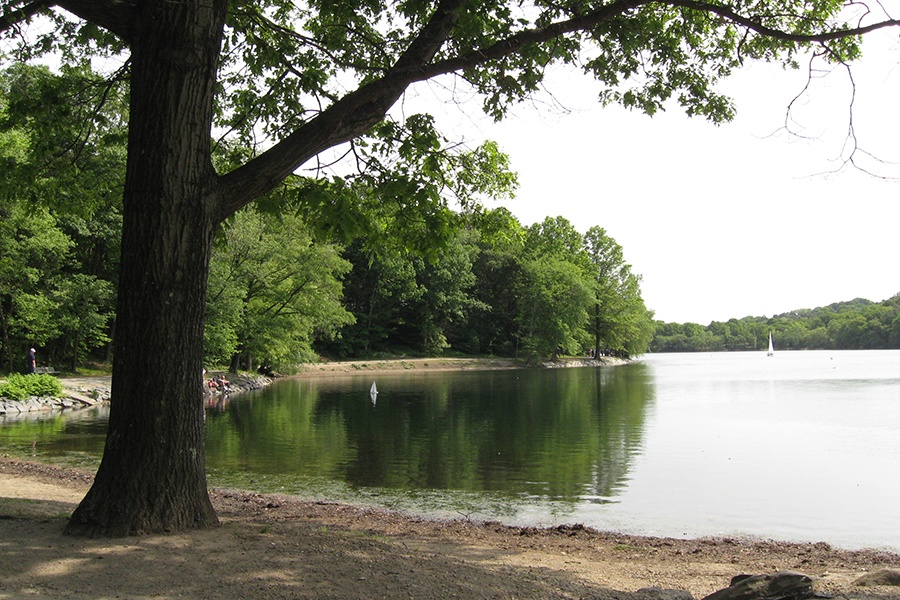 As a Jamaica Plain resident myself, walking or running (or skating, biking, and yes, sometimes even dancing) around Jamaica Pond has become the daily sabbatical I didn’t know I needed during quarantine. It has kept me sane and connected to my neighborhood on otherwise lonely and draining days spent keeping up with the news cycle and tending to my mental health. But as the temperature climbs into the 90s and the relentless humidity fills the air with a heaviness I can’t shake, I find myself staring longingly at the ducks and geese swimming in the water, wondering why I can’t join them—if even for a mere second.

You see, a sign in front of the boat house forbids swimming in Jamaica Pond. I’ve never known the reason why, though. And while I’ve swam in other ponds near Boston, including Concord’s popular Walden Pond and Turtle Pond by the Dedham border. (Update: As it turns out, swimming is a no-no in Turtle Pond. Thanks to the reader who brought it to my attention!). Still, I’ve often wondered why I have to go so far to other watering holes when I have such a pristine one located close to my front door. My curiosity led me to do a little digging.

As it turns out, although Jamaica Pond seems shallow from the shoreline, it’s actually a kettle hole formed by a glacier— and has a depth of more than 50 feet in some places. What’s more, the drop-off can be extremely steep. Ryan Woods, spokesperson for the Boston Parks Recreation and Development, once told the Jamaica Plain Gazette “It drops like a black hole, creating a dangerous situation.”

In fact, swimming in Jamaica Pond was banned after two drownings in the mid-1970s. Before that, swimming was enjoyed for generations, and the Pond was even a popular site for massive Four of July celebrations and swimming contests in the late 1800s and early 1900s. The subsequent ban hasn’t totally prevented additional tragedies: The most recent drowning in the pond occurred in 2007 when a woman drowned fully clothed near a shallow beach on the northern end. There was a public debate in 2008 about bringing swimming back to Jamaica Pond, but it was quickly dismissed over such safety concerns.

In addition, as an opinion piece written by John Ruch for the Gazette lays out, a multitude of other things would be affected if swimming were to be allowed again. For starters, the wildlife I love watching, like the ducks, geese, and turtles, would be greatly impacted by the presence of human bodies in the water. And to make swimming safe, the vegetation growing in the bottom of the pond would need to be removed; it would need to be leveled off with proper sand and rock, likely causing a huge disruption to the ecosystem.

Five years ago the pond was closed to all visitors as a result of a harmful blue-green algae bloom. While not caused by humans, it was a stark reminder of our responsibility to keep our parks and bodies of water clean and well maintained.

Not to mention, with the presence of public swimming comes the presence of trash, coolers, and other elements that would drastically change the appearance of Jamaica Pond. If swimming were allowed, the pond would be unlikely to remain the same quiet respite from work we seek out now—it would become a crowded destination, such as Walden Pond. As it is, Jamaica Pond already offers a large scope of activities: The pond is stocked with fish, including trout, pickerel, bass, and perch, and boats can be rented at the boathouse. Plus, the 1.5-mile loop around the pond provides passersby with an idyllic view as they exercise, catch up with friends, or simply enjoy the solitude of a peaceful afternoon sitting by the waters edge.

The pond, part of the Emerald Necklace Conservancy, is one of the largest and purest bodies of water in Boston, and swimming could potentially change all that. It’s natural to wish for a swimming spot close to home, but it’s even more important to be thankful for access to a piece of nature that feels far from the hustle and bustle of the city. Because that’s really what you go to the pond for: peace.