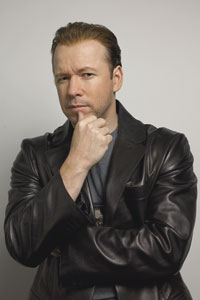 If you thought you forgot something earlier this month, it wasn’t just your keys. Dorchester’s own Donnie Wahlberg celebrated his 38th birthday on August 17th. Since a belated birthday card is always cheesy, you can wish the former boy band member a happy birthday in person tonight at Estate.

Donnie, of course, came to fame during the ’90s with the super-group New Kids on the Block. (Not like we had the huge poster on our bedroom door or a comically large pin with his image on it or anything.) Wahlberg quickly earned a reputation as the “bad boy” of the group, since he would curse in front of audiences of teenage girls. He also rode motorcycles, lifted weights (is this required of every Wahlberg?), and did bad dances as this 1990 video for “Step by Step” shows.

Since New Kids On the Block broke up (and we tossed out the poster and pin), Donnie has kept himself busy in Hollywood, playing Vincent Grey, the disturbed patient who shoots Bruce Willis‘ character in The Sixth Sense. More recently, Wahlberg’s been busy with The Kill Point, a show about a group of Iraq War veterans trying to pull of a bank heist. John Gonzalez talked to Donnie about the new show in Boston magazine’s July issue, and probably isn’t surprised he wasn’t personally invited to the party tonight.

Just because Gonz is on the outs with the second-youngest Wahlberg doesn’t mean you can’t attend tonight’s party. Give Donnie our best, and ask him if he’s still hangin’ tough.