The former Rhode Islander talks SNL, Tom Brady, and what it’s like to speak for America’s most divisive president. 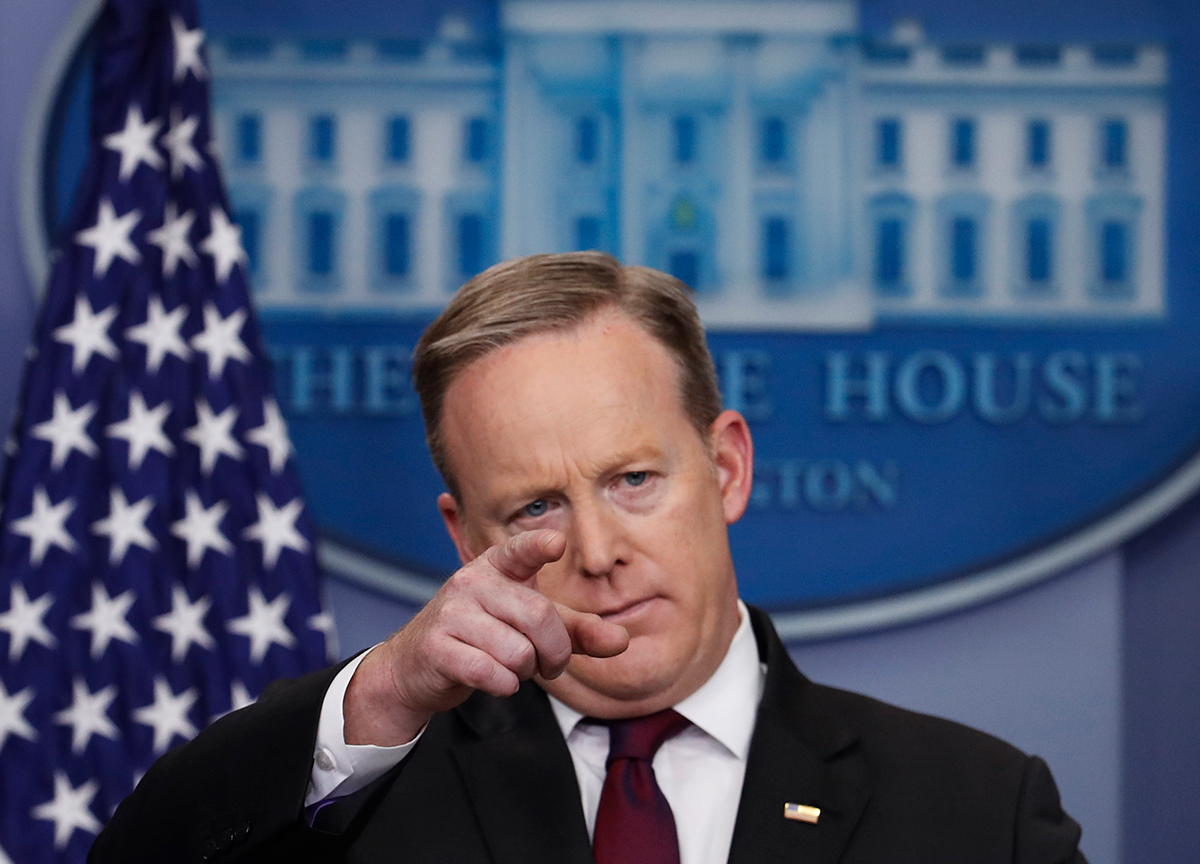 Barely a day goes by when Sean Spicer isn’t pissing somebody off. The 45-year-old White House press secretary has turned daily news briefings for President Donald Trump into must-see TV, facing sharp criticism along the way for his combative relationship with reporters—even being lampooned on Saturday Night Live. But during our exclusive interview, the former Rhode Islander revealed a side of himself that few Americans ever get to see. Spicer admits he already has his regrets—“There are some things I could’ve said better”—and acknowledges that his rise from being just another New England prep school kid to becoming one of the most-quoted men in America at times feels a bit surreal. For now, though, he’s just trying not to disappoint his boss.

Does President Donald Trump give you feedback on your press briefings?

It depends. Some days it’s really good, despite the narrative. Some days he’ll see clips of it or watch part of it. But he’s very involved in enacting his agenda and articulating it.

How close are you with the president?

I speak to him quite often to make sure I understand his thinking and his vision and how he wants it articulated. He has a lot of people around him who are very smart to help with his agenda.

There’s been so much back-and-forth with the media—and now Melissa McCarthy plays you on SNL. Does it bother you?

I’d be lying if I said it didn’t bother me from time to time [laughs]. We make mistakes; I make mistakes, but to hear people describe a motive behind them or say it was for some nefarious reason—yeah, that bothers me because I know that every day, I come to work trying to do the best job that I can on behalf of this president and country. I try not to get wrapped up in it and try to get better every day. Everyone is trying to make the country and the citizens proud of the work we’re doing, and we try to improve and try to do better, and that’s what we focus on.

Why do you think you’re in the headlines a lot more than most people who’ve had the same job?

What did you expect from this job going in, and how have the first few months differed from your expectations?

We’ve been on a nonstop mission since January 20. The president has a very ambitious and robust agenda, and he’s not wasting any time enacting it.

Is the intensity of the job about what you expected?

Parts of it are. But in terms of the intensity, there’s really nothing like this. I don’t think you can ever fully prepare for this.

Is your relationship with the media really as contentious as it’s depicted?

Well, I think you can pick out pieces. You know, a lot of the briefings last for about an hour, and I think you can find a two-minute exchange in any briefing that might be a bit more contentious than another. There are also some funny moments, some lighthearted moments, and some serious moments, but I can’t force people to watch every bit of the press briefing [laughs].

[Long pause.] Sure. I’m sure there are some things I could’ve said better. There are some things that I probably left out as well, or that I wish I had included as far as giving context. There are days where you think you could’ve said that better, explained that better, or included the following. Yeah, absolutely. I believe that if you want to do a good job at something, then you’re always analyzing the job that you’ve done to see if you can do it better.

But at the end of the day, how do you handle all of the criticism?

The end of the day is very late at night, so you try to go home, count your blessings, and wake up the next day ready to move and do it again. And I really do mean this. There really isn’t that much time to sit around and think about that. You focus every day on getting the job done, and we’re busy. We’re trying to keep up with this president, and you focus on that. That’s what drives you every day—making sure that you know the task at hand, what you have to do, rally the team and advance the president’s agenda.

Do you ever see the president’s tweets and cringe? Does anyone approve or look over them?

It’s a way for him to insert issues and ideas into the public narrative. You don’t need a filtered way to connect with the American people. That’s something most people would kill for.

What are the first three websites you visit each day?

No. We get a news aggregator. There’s a team scanning news at all hours. It’s not like I search the Washington Post or anything like that. I get up and it’s all sent to my device. I’ll look at that, I read the hard copies, and then I’ll look at Twitter and a couple of other social sites. And then I start watching television. I’m constantly flipping through the morning shows, starting right at 6. I’m making sure I hit ’em all, what topics they’re covering, what guests are on. Then I’m scanning hard copies of newspapers—not for the news, but more for the placement. So there are all types of aggregators that we use to get news sent to our devices. But to some degree, it makes a big difference when you actually look at the front page of some of these places to see where they’re playing. It’s not a question of visiting websites or whatever, because you need to know what’s in the Wall Street Journal, the New York Post, the Washington Post, all of the places that other papers around the country are using as sources.

You have deep roots in New England. When did you leave the region?

I grew up in Rhode Island. Most of my family on both sides is from Rhode Island. I went to school in Connecticut, at Connecticut College, and then really started to get bitten by the political bug. I did some internships, worked on some campaigns, and then moved to DC.

Do you still get up to New England often?

All of my family is still there. My mom is still there, I’ve got some aunts and uncles, both in Massachusetts and Rhode Island. My sister lives in Boston. We’re all big Pats and Sox fans, so I try to get up there as much as I can.

Your love for the Patriots and Red Sox is well known. And so much has been made of Trump’s relationship with Tom Brady. How close are they?

Brady and the president have known each other for a while.

I think the president admires Brady’s drive, his desire to win, and his commitment to practice and preparation.

What’s one piece of advice from President Trump that has stuck with you?

I tend not to share the context of my private conversations with the president.

President Trump had won the election and we were in the transitional phase, going around the country and talking about the promises he was going to fulfill and how he was going to do it. We had this back-and-forth going on the plane about the interest of this position. Then he called me just days before Christmas and formally offered me the job. I was ecstatic to accept this job and shared with him that I was honored to do it and that I would do everything I could to the best of my ability to articulate his agenda and his vision.

Do you have a routine to prepare for press briefings—do you psych yourself up before going up to the podium?

No. I just prepare as much as I can. It’s like preparing for a test every day.

Do you ever wonder how you ended up here?

I’m sure one day it’ll soak in. We just take it day by day. Where we’re going tomorrow is really about the president’s agenda. At some point it’ll sink in, but it’s an awesome, awesome, awesome thing to be part of this, and yeah, I do pinch myself every once in a while when I realize where I work every day. You have to stop and look at the door. The door you walk into every day that you call work is called “the people’s house.” All I wanted to do as a kid was to get a tour of the East Wing, and now I’ve got an office just steps from the Oval Office.

Press secretaries tend to last a few years. What do you envision for your future?

[Laughs.] Well, I’ll worry about this week, this month, this year, and the future will take care of itself. It’s an honor to have this opportunity, and to know that—whether you’re from Rhode Island or anywhere—if you work hard, there’s a place for you to succeed.

Editor’s Note, April 14, 2017: This Q&A appears in the May 2017 print issue of Boston magazine. The interview took place on March 21. Since then, Spicer has landed himself in more hot water, falsely stating that Hitler “didn’t even sink to using chemical weapons” during the Holocaust while discussing the Syrian President Bashar al-Assad’s recent attacks at a press conference earlier this week. He has since apologized for the comment, but many—including House Minority Leader Nancy Pelosi and Republican Representative Mike Coffman from Colorado—are now calling for his resignation.