Gaming the System: Why We Need Millennials to Gamble

In today’s digital age, millennials are shunning scratch tickets like never before. But if the state lottery can’t hook the next generation of gamblers soon, we all lose. —Emily Kumler 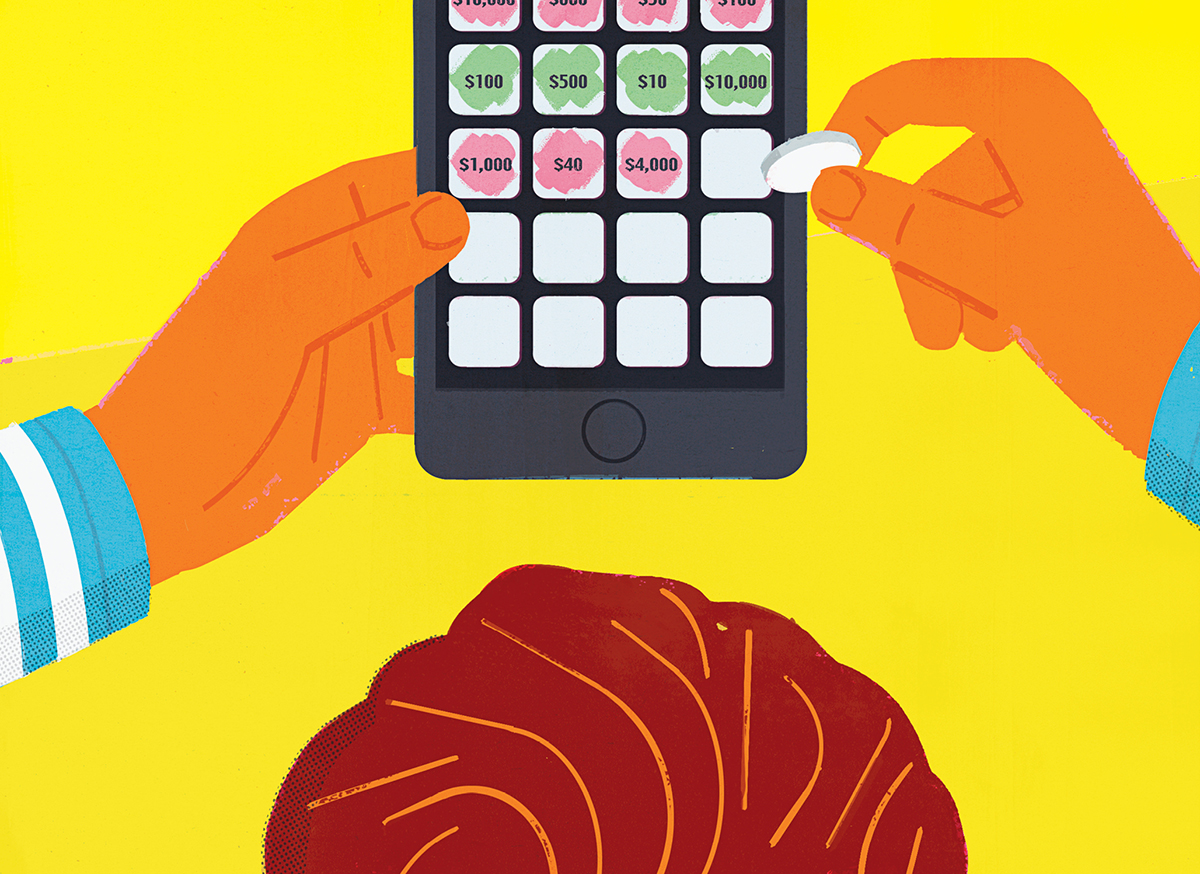 Uh-oh. It looks like Boston’s young adults are upsetting the status quo once again. We already know that millennials don’t give a hoot about traditional banking and that they won’t shop at supermarkets like their parents, but now they won’t even buy lottery tickets like they’re supposed to. While at first this might sound like a good thing—after all, haven’t we encouraged our youth to steer clear of gambling?—it’s actually an urgent problem with far-reaching implications. And if we don’t get our twentysomethings hooked on the lottery soon, we could all be in for a world of economic hurt—including higher taxes and budget shortfalls.

There’s no denying that Massachusetts has a gambling problem, and it has nothing to do with Steve Wynn’s $2.4-billion casino rising over Everett, or even the long-lost ponies at Suffolk Downs. No, the real addiction is our woeful dependence on the Massachusetts State Lottery, which last year pumped $989 million into state coffers, making it the single largest source of unrestricted local aid to our cities and towns. Those lottery dollars help buy new fire trucks, hire police officers, and maintain our parks and public works. Recently, though, the reliable revenue generator is showing signs of stagnation as young Bostonians shun the thrill of scratch tickets, Mega Millions, and Powerball for more-interactive games such as fantasy sports.

The latest numbers paint an ugly picture. A recent Gallup poll found that a mere third of 18- to 29-year-olds nationwide played the lottery in the past year, compared with more than 60 percent of people ages 50 to 64. In other words, millennials aren’t hitting the corner store for a gallon of milk and a $10 scratcher like their parents do. That’s troublesome, given that 70 percent of the state lottery’s $5.2 billion in sales last year came from “instant games.” In hopes of attracting younger players and staving off financial disaster, a handful of state lawmakers are calling for the creation of an “iLottery” system. Imagine a future where you could play Candy Crush for real money on your iPhone—or swipe right on your Android and win for life. Or, more likely, lose a few bucks and help pad state coffers while you’re at it. “I don’t see people in my district telling me to raise taxes,” says state Senator Jennifer Flanagan, a Leominster Democrat who is sponsoring an iLottery bill and argues that a digital lottery could mean an extra $100 million a year for the state.

Before Flanagan or anyone else gets too excited, though, there is still a wealth of opposition. Anti-gambling groups have long decried lotteries as government-run marketing schemes that exploit the hopes of the less privileged. As Les Bernal, national director of Stop Predatory Gambling, points out, “Ten percent of people who play the lottery represent 70 to 80 percent of the lottery revenue.” The state lottery has also come under fire for disparities in how the money is doled out: In 2016, for instance, 37 Massachusetts towns didn’t sell lottery tickets yet received nearly $5 million combined from the state’s lottery fund.

As a result, recent attempts to authorize an iLottery have rekindled long-standing questions and raised new ones: Wouldn’t an online lottery put brick-and-mortar stores that sell lottery tickets out of business? And what about the possibility of underage rounders hacking their mom’s phone and betting the farm? Convenience-store trade groups and sports-betting sites have come out in force against an iLottery, and some see the push to turn our smartphones into handheld casinos as a predatory ploy that could turn the most iron-willed player into a driveling slot-zombie. In May, an industry poll sponsored by the Save Our Neighborhood Stores Coalition found that about 80 percent of Massachusetts voters are against digital lottery sales.

However we cut it, though, the state lottery is too big to let fail—but the stakes for saving it are just as high. Embrace a digital future, and we might turn a new generation on to one of history’s greatest addictions. Turn our backs, and we stand to miss out on millions of dollars that help fund important local services. The only real question that remains is: How big a gamble are we all willing to take?