A Boston “Rally for Dreamers” Will Follow Trump’s DACA Announcement

Opponents of the move will gather downtown at 4 p.m. 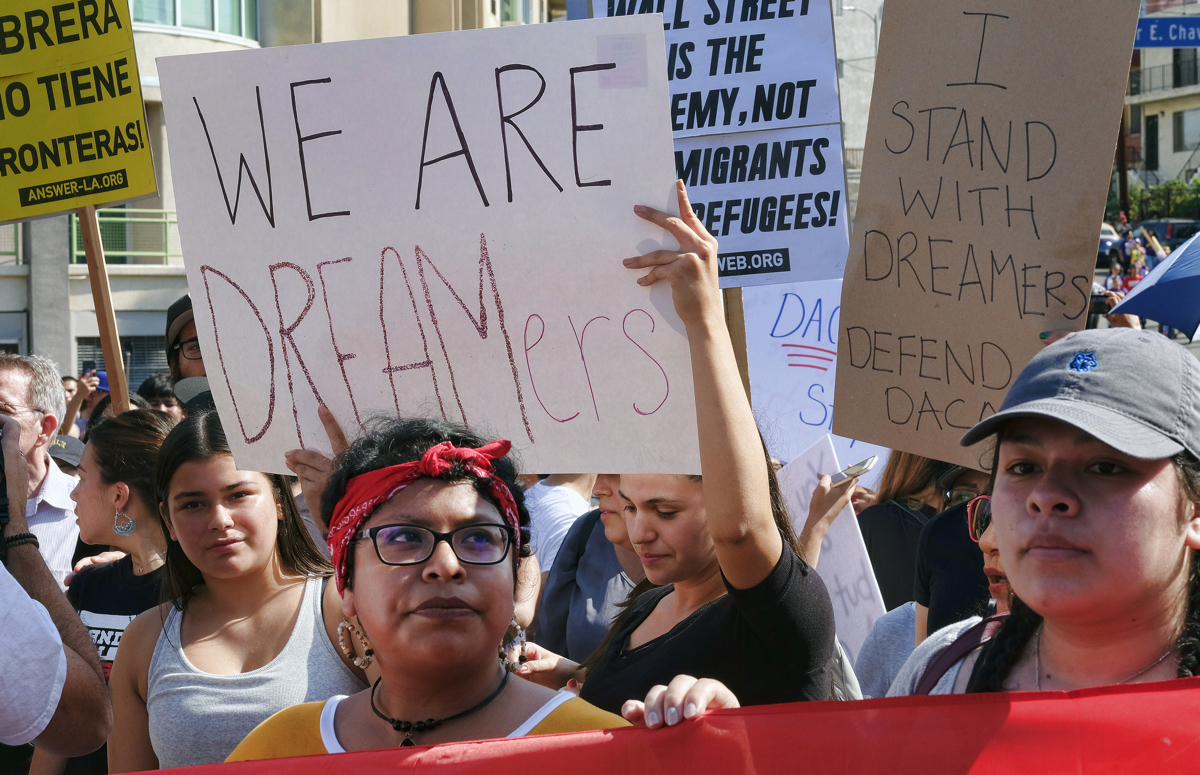 Photo from Los Angeles via AP

Opponents of President Trump’s newly announced plans to wind down DACA, the program that spares some 800,000 young immigrants from deportation, say they will rally in Boston on Tuesday afternoon.

The Massachusetts Immigrant and Refugee Advocacy Coalition is organizing a “Rally for Dreamers” Tuesday from 4-5 p.m. in downtown Boston, at a location that remains to be determined. “We cannot let the Trump Administration say they have ‘heart’ and yet steal the security, safety, and future of our immigrant youth,” the coalition writes on a Facebook page for the event. “Now more than ever, we must come together to support the more than 9,000 DACA recipients in our Commonwealth.”

Another group, Centro Presente, plans to hold a rally at the State House at 6 p.m. on Wednesday. “While immigration policy is an issue that ONLY Congress can finally fix,
the group says on Facebook, “we can expect and DEMAND MORE of our local elected officials to SPEAK OUT and CHALLENGE the failure of the U.S. Congress to address the issue, the heartless and immoral implementation of a broken and unjust immigration system by the President and his operatives, and the complete failure of our media to facilitate an honest and comprehensive public discussion of the causes of immigration.”

Deferred Action for Childhood Arrivals, or DACA, is an Obama era policy from 2012 that grants undocumented immigrants brought here by their parents as children a social security number and the authorization they need to work, attend school, and live without fear of being deported. It’s available only to people who meet certain criteria, including that they do not have criminal records, migrated to the U.S. prior to June of 2007, and were younger than 16 when they arrived. Thousands of DACA recipients, known to many as “Dreamers” are workers or students in Massachusetts, and many have little or no memories of the countries of their birth (the average age of DACA recipient when they crossed the border was six-and-a-half years old).

The Trump administration announced a plan to phase out the program over six months, a period which we’re told is supposed to give Congress time to act.

“I am here today to announce that the program known as DACA that was effectuated under the Obama administration is being rescinded,” Attorney General Jeff Sessions said in a news conference Tuesday morning. He called the program an “unconstitutional exercise of authority by the executive branch.”

The Boston rally, organizers write, will call on Congress to pass the Dream Act—which among other things would make law the 2012 Deferred Action for Childhood Arrivals executive order signed by President Obama in 2012. Previous efforts to pass similar legislation failed. MIRA is also advocating for Massachusetts state lawmakers to pass the Safe Communities Act, which would curtail efforts to enlist local law enforcement to help with deportations, and the Higher Education Equity Act, which would allow the children of undocumented parents who meet certain requirements to pay in-state tuition at state colleges, universities, and community colleges.

The nearly a million young people impacted by Trump’s decision, who are now largely in their 20s, have some arguably very good reasons to be frightened right now. In part that’s because applicants for DACA protections had to hand the government reams of personal data, including their home addresses and phone numbers. It’s unclear what Trump, Sessions, and other nationalist officials inside the White House might do with all that information. In a series of tweets Tuesday morning, Trump wrote that Congress should “get ready to do your job – DACA!” and added that,  “we are a nation of laws. No longer will we incentivize illegal immigration. LAW AND ORDER! #MAGA”

Meanwhile, Massachusetts leaders have lined up in opposition to Trump’s decision since word of it leaked over the long weekend, first in Politico.

The heads of Massachusetts’ 15 community colleges, in a joint letter, collectively expressed their support for DACA and vowed to continue educating students regardless of immigration status.”Ending DACA and subjecting these individuals to deportation not only contradicts our shared values and the inherent principles in our educational missions, but threatens the economic well-being of our region, state, and country,” the presidents write. They add, “The ‘crime’ of the undocumented immigrant today is pursuing the same dream of many in the past – a better life for their families.”

Gov. Charlie Baker, in a statement following the announcement, says, “President Trump made the wrong decision today that could negatively impact our economy and many of the Commonwealth’s families.”

DACA also came up several times at a Labor Day breakfast in Boston, according to the Globe.

“In 2012, we promised them the chance to live, work, and contribute to this country without being ripped away from the only home most of them have ever known,’’ said Sen. Elizabeth Warren at the event. “Today they are in our schools, they are in our military, they are in our unions. We promised to protect the 800,000 DACA kids from deportation, and America should keep its promises.”