Until Baker cuts off the RNC, his stern words opposing the candidate are just that: words. 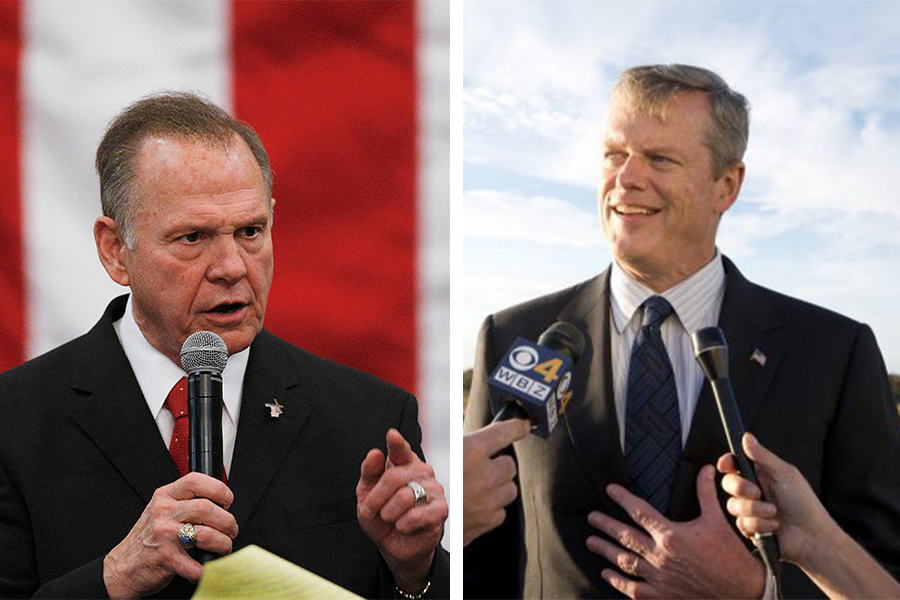 Republican Gov. Charlie Baker has spent his tenure leading deep blue Massachusetts distancing himself from some of his GOP colleagues, most notably throughout his party’s alliance with candidate and now-president Donald Trump. He reportedly blanked his presidential ballot last year, refusing to vote for Trump, who he said was unfit for office, or the Democrat, Hillary Clinton, who he said he was “no fan of” because he “had trouble believing her.”

His stance on the president since the election has been nuanced. Though he continues to serve on an opioid commission created by the president, he has also helped write stern letters to the administration about issues that matter to Massachusetts, like when he joined governors opposing Trump’s travel ban and or when he stood up for the state’s population of Haitian immigrants.

The latest chapter in Baker’s uneasy ties with his political party came on Monday, when reporters cornered Baker on Roy Moore, the far-right candidate for Senate in Alabama who has been accused of preying on teenage girls while he was in his 30s. Baker, taking the layup, said he did not support Moore, and even more or less endorsed his Democrat opponent Doug Jones, who he referred to as “the alternative.”

“I certainly don’t want to see Roy Moore win. That means, obviously, that I would be supporting the alternative,” he said, according to State House News. He has also said he believes that, if Moore wins, the Senate should expel or refuse to sit him.

But here’s the thing. All this time, Baker has supported his party, including its most indefensible members and policies, in another way: a joint fundraising agreement between MassGOP and the Republican National Committee. As the The Boston Globe noted in a 2016 investigation, the popular governor and skilled fundraiser (he’s reportedly raised $5 million in his first term) participates in a unique agreement through which donations are funneled through the Massachusetts Victory Committee to national Republicans, who pump much of it back into the state while taking a 40 percent share. And according to the Boston Globe, he doesn’t have any plans of ditching that agreement. Even now.

“If I thought raising money for the Mass. Republican party had anything to do with Roy Moore’s campaign, I would not do it, OK?” Baker said Monday, according to the News Service. “I said from the beginning that I didn’t think he was fit for office.”

It’s not clear that the money he’s raising for the RNC isn’t going to Moore, though. The RNC initially withdrew its support for Moore after the Washington Post brought to light allegations from multiple women, including one who alleged he molested her when she was 14. But then party leaders changed their minds, and the committee has resumed its efforts to get Moore elected. That means, whether he likes it or not, Baker’s money might just end up sending Moore to Washington.

Look, Baker has got to be feeling pretty invincible right now. He maintains a sky-high approval rating of about 69 percent from Massachusetts voters, who seem impressed with their governor’s ability to make decisions for himself, and buck the party line.

But the issue of his ties to the Trump-allied RNC has created an opening for Newton Mayor Setti Warren, who is seeking the Democratic nomination to run against Baker for the governorship next year. Warren’s campaign sent a press release Monday evening headlined, “Baker Reaffirms Commitment to Raise Money for Roy Moore-Backing Republican National Committee.” Zing.

And, honestly, they have a point.

Prominent members of the RNC, disgusted by the party’s decision on Moore, have resigned in protest. So why can’t Baker put his money where his mouth is?