He accepted an endorsement from the president in his Utah Senate race. 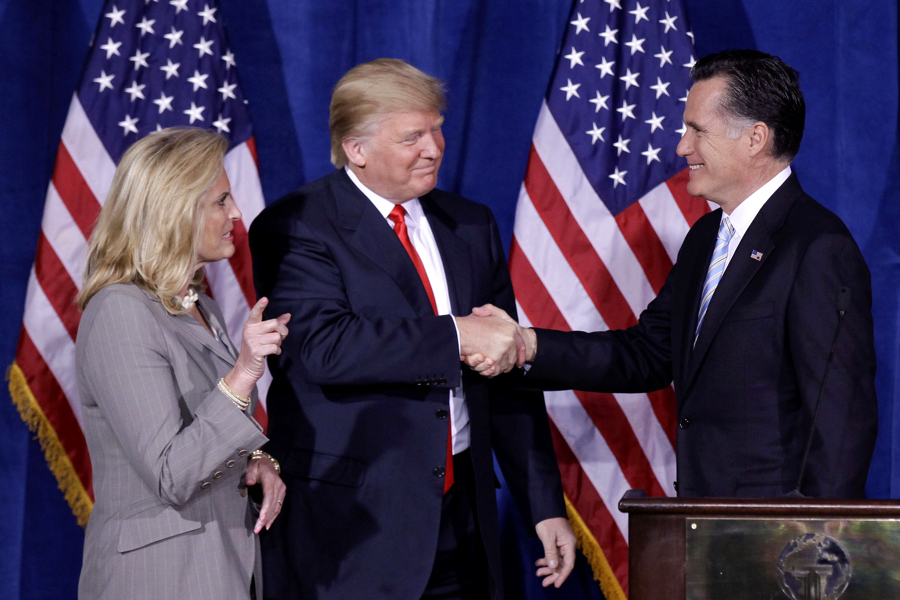 The long-running feud between Mitt Romney and Donald Trump has apparently run its course. Amazing, isn’t it, how quickly a friendship can repair itself when an election is on the line?

Romney, who last week formally announced his campaign for U.S. Senate in Utah, accepted an endorsement from the president in an exchange on Twitter.

.@MittRomney has announced he is running for the Senate from the wonderful State of Utah. He will make a great Senator and worthy successor to @OrrinHatch, and has my full support and endorsement!

Thank you Mr. President for the support. I hope that over the course of the campaign I also earn the support and endorsement of the people of Utah.

So once again the former Massachusetts governor is back on the good side of the leader he’s described over and over as a con man and threat to democracy as we know it.

“Here’s what I know: Donald Trump is a phony, a fraud. His promises are as worthless as a degree from Trump University,” he said in a fiery anti-Trump speech he gave in 2016 (which, by the way, was given in the great state of Utah). “He’s playing the American public for suckers: He gets a free ride to the White House and all we get is a lousy hat.”

We were led to believe that Romney was so disgusted by Trump that he wanted to distance himself from having accepted an endorsement from Trump when he was the Republican presidential nominee in 2012, per a tweet from last March.

“If Trump had said 4 years ago what he says today about the KKK, Muslims, Mexicans, disabled, I would NOT have accepted his endorsement.”

But remember, this is not the first time Romney has flip-flopped on whether Trump is a dangerous huckster. We got a taste of this back in November of 2016, back when there was a Secretary of State post open, and he met the new president-elect to discuss the topic over frog legs.

“I happen to think that America’s best days are ahead of us. I think you’re going to see America continue to lead the world in this century,” Romney said at the time, “and what I’ve seen through these discussions I’ve had with President-Elect Trump, as well as what we’ve seen in his speech on the night of his victory, as well as the people he’s selected as part of his transition, all of those things combined give me increasing hope that President-Elect Trump is the very man who can lead us to that better future.”

Even after all that gushing, Romney didn’t get the job.

And then, after Trump took office, Romney was back at it. There were the outraged denouncements, like after Trump’s sympathetic statements about white nationalist protesters in Charlottesville. In grand terms that were supposed to communicate the depths of his convictions, Romney railed against not just the president, but the “apologists” who enable him, and he warned against the potential “unraveling of our national fabric.”

“Whether he intended to or not, what he communicated caused racists to rejoice, minorities to weep, and the vast heart of America to mourn,” he wrote on Facebook. “His apologists strain to explain that he didn’t mean what we heard. But what we heard is now the reality, and unless it is addressed by the president as such, with unprecedented candor and strength, there may commence an unraveling of our national fabric.”

I guess the national fabric is holding up just fine!

Romney’s campaign announcement last week came with a video, which seemed to make the case that he would help reform Washington in the mold of Utah—noting for example, that “Utah welcomes legal immigrants from around the world,” while “Washington sends immigrants a message of exclusion.”

But he didn’t mention Trump by name, and it looks like we now know why: It was what was best for Mitt Romney.