Workers at seven Marriott hotels walked off the job today. 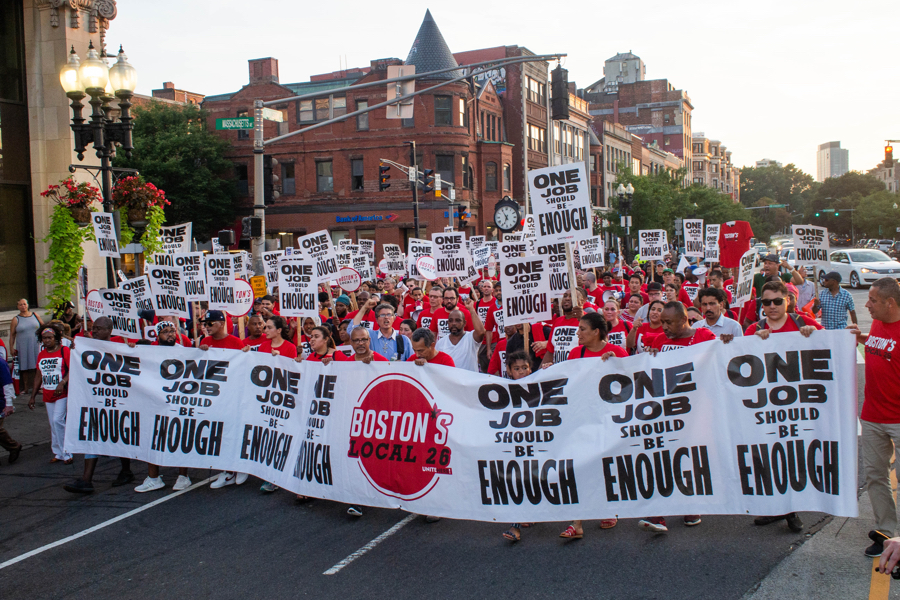 A union representing employees at the hotels, Unite Here Local 26, has fought to get the massive hotel company to offer more stable hours, protections from job losses due to automation and new sexual harassment protocols. In a protest happening against the backdrop of the city’s hotel boom, they have rallied around the slogan “One Job Should Be Enough.”

“I am striking because I have to work three jobs to try and cover all my family’s expenses,” Brooke Melanson, a bartender at the Westin Boston Waterfront, said in a statement released by the union. “Just like any parent, I want time with my children to see them grow up. We hear all the time how well Marriott is doing. We want Marriott to recognize our contribution to their success.”

In June, hundreds of workers staged a picket outside the Marriott-run hotels. Then in September, union members voted overwhelmingly to authorize a strike in September, but leadership had left open the possibility of reaching an agreement with the company, the largest in the world.

In a statement, a Marriott International spokesman says the company is “disappointed” by the decision to strike. Its hotels will remain open while the strike is ongoing, and employees who want to continue working will be allowed to do so.

We are disappointed that Unite Here has chosen to resort to a strike at this time. Marriott’s current economic proposal matches the economic terms in the parties’ last contract, which included the largest increases in the parties’ bargaining history. We have not proposed any changes to our associates’ health, welfare or retirement benefits. During the strike our hotels are open, and we stand ready to provide excellent service to our guests. While we respect our associates’ rights to participate in this work stoppage, we also will welcome any associate who chooses to continue to work.

So much support on the streets of Boston! Thank you! #1job #1u #MarriottStrike pic.twitter.com/1m9nWPGRdP

Want to #SupportTheStrike? Don’t cross picket lines. Visit https://t.co/zD9tl4zRKV to view a list of hotels at risk of labor dispute and which are on strike. #1job #MarriottStrike pic.twitter.com/IS6LmgUBqc