How One Red Sox Fan Lost His Way

The Red Sox are great this year, but for this fan, the memories of the curse-breaking season can never be surpassed. 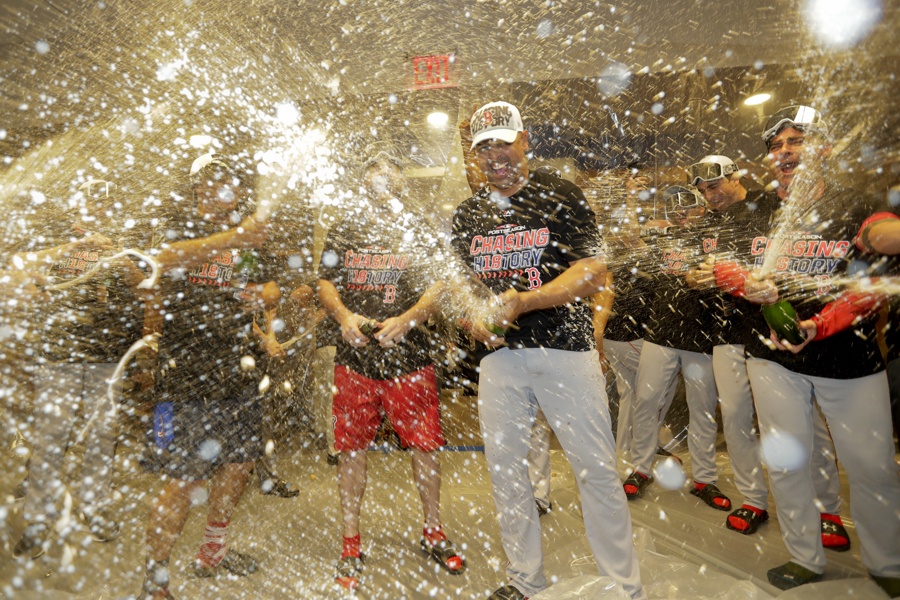 I hate everybody born after 1995. All of you. I might be shaking my fist at a cloud right now, but I have a far better reason than Abe Simpson: Jealousy. You see, the Boston edition of the born after-’95-types only know success in sports. These vapid vampires no longer tingle with anticipation at the idea of a championship. They just feed from the neck of constant success, and now I fear I might be one of them.

I don’t mean to be a buzzkill during this era of abundance. We Bostonians are wild about our teams. But we’ve been slipping in recent years. That urgency is gone. Since the Patriots’ unlikely Super Bowl victory on February 4, 2002, this town has witnessed 10 championship parades and even more trips to the championship round. Do we still want our teams to win? Of course. But winning is the norm now. That nervous anticipation has turned into greedy expectation and, even worse, indifference. This indifference manifests differently from person to person. Somehow, for me, it’s only involved the Red Sox.

It’s not like the Sox aren’t giving me reasons to cheer them on. The 2018 Boston Red Sox had far and away the best record in Major League Baseball. And boy, has this season been fun. Like, really, really fun. They have an MVP candidate named “Mookie” on the team! A Mookie. In Boston. Do I know all this because I’ve been yelling at my TV for 100-plus games this season? Nope. I know this because I saw some guy in a tacky corduroy blazer say it on TV.

There was a time when things were different. On October 16, 2003 I, along with all of Boston, experienced the most excruciating pain sports had to offer when Aaron Boone hit that walk off home run in the Bronx to send the Yankees to the World Series. Now, I don’t know if that made the ALCS comeback against the Yankees and subsequent World Series win in 2004 that much sweeter, but that was a two year roller coaster of despair to euphoria that I will never forget. I’ve been in actual relationships with less passion. But my Red Sox fandom wasn’t always as obsessive.

And if you were a ’90s Boston kid who liked sports, every single team you rooted for was trash. The Celtics had various sudden tragedies that led to the franchise’s slow fall from ’80s greatness. I have a vague recollection of the Bruins being somewhat decent in the playoffs. Ulf something, right? The early ’90s Patriots were *insert Charlie Murphy laughing gif here.* And the Red Sox were just a decade-long tease, offering the occasional exciting regular season only to disappoint us in the playoffs again and again.

I didn’t start watching baseball until middle school, and even then I didn’t like it at first because it was boring and slow. It was only useful to me as background noise for a peaceful Sunday nap. Sunny field, dewey-voiced announcer lazily calling the balls and strikes, cold glass of lemonade on the coffee table dripping off icy frost. One day I didn’t doze off. There was a tension onscreen that I had never seen before. Red Sox reliever Jeff Reardon, an Al Borland clone, was about to set the all time Major League saves record on a crisp June night—against the Yankees. Suddenly, as if a fanatical Red Sox beast within me had just been awakened, I was invested.

Before long I was yelling at my television and calling my baseball card-collecting friends to brush up on the game’s terms. (“Why they out here spelling ‘era’ in all caps? Seems aggressive. Ohhh.”)

Then I learned about the players. There was John Valentin, a swashbuckler’s mustache-sporting shortstop who once had an unassisted. Triple. Play. You couldn’t tell me anything after that. Anytime something dribbled up the middle I’d yell “Here we go, baby!” Or Mo Vaughn, a hulking, home run-hitting machine who loved strip clubs. Whenever Mo came up to bat, there was a good chance he was sending that ball over the Green Monster and all the way to the Foxy Lady.

And it wasn’t just me suddenly caring about the Sox. One particular Sunday I was watching a game when my mom popped in the living room.

“Well then, slide over so I can watch Mr. Greenwell!”

My mom had a crush on the fuckin’ Gator. It was settled—we were into the game. Every Sunday. For me, every Sunday turned into every Friday, Saturday and Sunday. And I followed every twist in that era (not to be confused with ERA, folks) of Red Sox baseball—all the ups and downs. We would sign the ghosts of formerly great players. You remember the storied Red Sox careers of Andre “The Hawk” Dawson and Jose “The Snitch” Canseco, don’t you?

But soon the team brought us players that would catapult the franchise—and its fans—to championship glory. That’s right, we got Pedro Martinez (who in 1997 got a six year, $75 million dollar deal. Pedro! You couldn’t sign me for that in today’s game) and my favorite Red Sox player ever, Manny “I live in the penthouse of the Ritz-Carlton and my car has its own elevator, bitches” Ramirez! No them, no titles. Period. It was on.

So how did I fall off as a Red Sox fan? I don’t know the answer. Maybe it was everyone belting “So good! So good! So good!” during “Sweet Caroline.” By 2013 I was still a rabid Celtics and Patriots fan, living and dying with every play, but I barely made time for the Sox that year. I watched the World Series, but the regular season leading up to it meant almost nothing to me.

I’ve been distant from the Red Sox over the past 5 seasons, but never to the extent I am now. Why? Deep down, I know I still care. I want them to win the World Series. I won’t be happy if they lose.

Did my Red Sox fandom peak in 2004? Was I truly a baseball fan or just obsessed with the idea of seeing that 86-year curse broken? Am I even the same depressed fan who ate pancakes in South Street Diner at 3 a.m. after Boone broke our hearts in ’03?

I don’t know. I may never know. I do know that I’m still a fan, and though I haven’t watched a second of baseball this season, I can promise you that if and when the Red Sox bring home the title in 2018 I will be there, front and center, sporting a brand-new Red Sox shirt with the tag still attached to it.