The outspoken state representative on what’s rotten on Beacon Hill, running for higher office, and where to find the best Chinese food in Jamaica Plain. 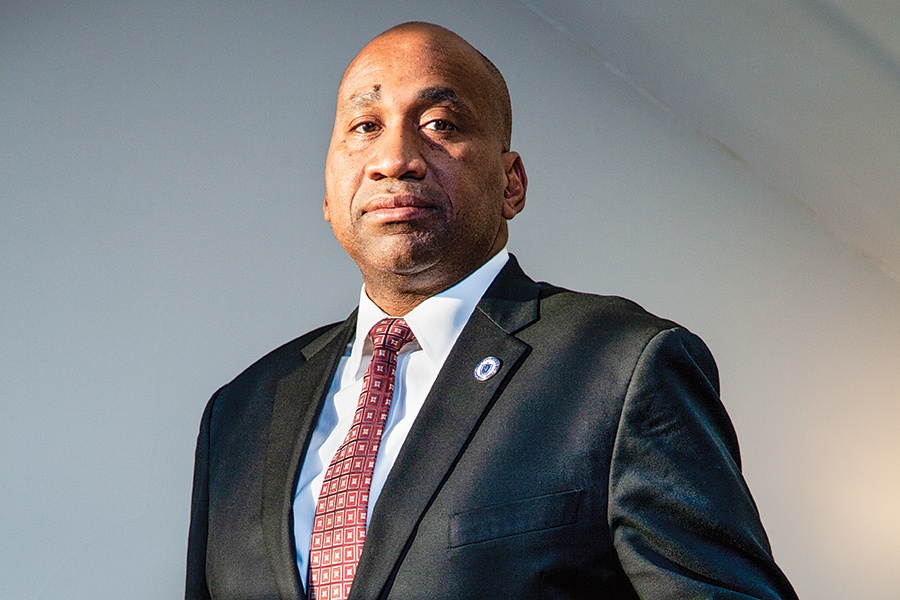 Sure, a lot of people don’t like their boss, but state Representative Russell Holmes has made an art out of antagonizing his with particular vigor, calling fellow Democrat Robert DeLeo, the speaker of the House, a “dictator,” trying to organize a takeover to unseat him, and getting stripped of an important vice chairmanship when his efforts proved unsuccessful. Even so, the representative for the Sixth District, which includes sections of Dorchester, Mattapan, Hyde Park, Jamaica Plain, and Roslindale, has no intention of letting up. On a recent afternoon, Holmes sat down with me in his small office on the second floor of the State House to talk about the state of Beacon Hill. As usual, he pulled no punches when it came to his boss.

Okay, let’s get right to it. You and House Speaker Robert DeLeo have had a very contentious relationship for some time now. What’s behind the clash between the two of you?

The entire legislative establishment is a scam. Speaker DeLeo is like a shepherd leading the sheep. Most reps vote the way he tells them to vote. My issues with his leadership came to a head last summer when Brian Dempsey, who was presumed to be the next in line to be speaker by everyone in the building, abruptly announced he was resigning from the legislature. I believe Dempsey left when it became clear to him that DeLeo was not going to be leaving anytime soon. When that happened, I took the opportunity to say that it was now time for the Black and Latino Legislative Caucus, the Progressive Caucus, and the Women’s Caucus to come together as a voting bloc and have a say in the selection of the next speaker.

Well, DeLeo was not happy with what I said. So he demoted me by removing me from my leadership position as vice chairman of the Joint Committee on Housing. [As a result, Holmes lost $5,200 in extra pay and some political clout.] But I have no intention of leaving, and I will not be silenced. The people whom I represent expect me to advocate about matters that are important to them, and I will continue to do that.

Have you been shunned by your colleagues as a result of your battle with DeLeo?

It happens all the time. But I think of what congressman and civil rights leader John Lewis always says: We need to find a way to get into good trouble, necessary trouble, to help save our democracy.

When DeLeo became speaker in 2009, he was the driving force behind instituting eight-year term limits on the position. But in 2015, he was responsible for doing away with them. What are your thoughts on this reversal?

As the old saying goes, “Power corrupts; absolute power corrupts absolutely.” I believe that at the time the speaker got term limits instituted, he intended to leave after eight years. But along the way, he lost his perspective on what is best for the citizens of this commonwealth and now thinks of what is best for himself. Not having term limits takes the power away from the people.

You’re cosponsoring legislation to regulate the compensation of members of the House. What do you hope to accomplish with it?

As it stands now, House members get stipends for serving as committee chairs. But the speaker uses these assignments as leverage to get the members to vote the way he wants them to. Except for a few positions where the workload is large, as is the case with the speaker and the majority leader, my bill would flatten everyone’s salary no matter what committee they chair. That way we would not be pitted against one another. It would work the same way that it works in Congress. I am also working on making the distribution of office space more equitable.

A group of advocates is trying to convince the city of Boston to change the name of Faneuil Hall to Crispus Attucks Hall, because Peter Faneuil, who gifted the building to the city circa 1740, owned and traded slaves. Attucks was a black man who is purported to have been the first person killed in the Boston Massacre. What do you think?

You were born in Mound Bayou, Mississippi. Talk about what life was like growing up there. How has your upbringing influenced you in terms of the legislative issues you find important?

Mound Bayou was settled by former slaves. Everyone in the town was black—my neighbors, my teachers, the mayor, the police officers, the doctors, the judges. I actually didn’t know that the surrounding country was mostly white until I was seven years old and I watched Roots.

My parents never married. They were children when they had me—my mom was 15, my dad was 17. Many folks thought my mom should abort me. But my grandparents were strict Christians, and in no way was that going to happen. That led to my profound decision to be pro-life.

I had a nice childhood, dividing my time between Mound Bayou and Mattapan, where my father moved to when he enrolled in Tufts University to study engineering. Here I got to see so many more economic and educational opportunities. But still, I liked living in both worlds. My mom now lives with my wife and me in Mattapan. My dad works at Harvard Vanguard as head of IT.

My upbringing influences me in my legislative work in many ways. One prime example would be my focus on civil service reform to make it more equitable to minorities.

I’ve read that your father was addicted to cocaine. How did that influence your life?

The adage “What does not kill you makes you stronger” is true. We lost everything, from the house to the car, as a result of my dad’s addiction to cocaine. But seeing the remarkable changes in his life as he recovered from his addiction has motivated me to stay true to my values and to help those who are in need. That is why I spend time visiting prisoners and helping the most vulnerable among us.

What’s been your proudest accomplishment?

Although Mattapan is the most transit-reliant community in all of Boston, it did not have good options to get downtown. The Fairmount commuter-rail line had been traveling right through Mattapan for decades, but it did not stop there. That ended in February. After much resistance and concerns from neighbors and after lawsuits and questions regarding funding, a new station was opened to remedy the problem. It reduced a 50-minute-or-so ride down to 20 minutes. Imagine giving residents back a half-hour of their lives each day as they go to work. We are literally giving them two weeks a year of life back when they will not be in transit.

Who was the most important role model for you along the way?

My granddad—my dad’s dad. His name was Columbus Preston Holmes. He was the postmaster of Mound Bayou and a World War II veteran. He was the patriarch of our family. I could go to him with any problem I had. He was the one person who I could talk to about my father’s addiction to cocaine. He was absolutely the number one role model in my life.

Here are a few lightning-round questions. What book are you reading now?

The New Jim Crow by Michelle Alexander. It’s all about the mass incarceration of black men.

Favorite movie of all time?

My favorite one today is Madam Secretary. My favorite of all time is The West Wing. I like Jed Bartlet.

There’s golf, and everything else is far below it.

What do you shoot?

Favorite places to eat in Mattapan?

I like to go to Ali’s Roti and Flames. I also like the Chinese food at JP Kitchen in Jamaica Plain—love the crab rangoon there.

When former state Senator Linda Dorcena Forry announced last year that she was resigning to take a job with Suffolk Construction, you considered running for her seat. But eventually you decided to stay put. How come? Do you have plans to someday run for higher office? Could you ever see yourself being speaker?

More than anything, I didn’t run for the Senate because I thought my attention would be diverted away from the community that needs me the most. But I am confident that I could have won. Maybe someday. And yes, someday I might want to be speaker. Absolutely.

What are some of the things your constituents ask you to help them with? Any strange requests?

By far, the number one request for my help comes from constituents who are having housing problems with things like evictions, foreclosures, and Section 8 vouchers. The second-most-frequent request comes from those looking for jobs. I connect them with as many opportunities as possible, whether it be casinos, the MBTA, the commuter rail, the state, or the city of Boston. As for unusual requests? I’ve been to a constituent’s house to help them get water out of their basement and to another place to get a bat out of their house. I’ve even been to a constituent’s house who had a squirrel touch an electrical line and die, and had to figure out how to get the squirrel off the line.

It seems that every week we read a newspaper story about yet another murder in Dorchester or Mattapan. Is this crisis solvable?

It really starts with poverty. The nut of it is really not having the resources to access education. There are an awful lot of poor people concentrated together, and crime is the consequence. So how do we get to the end of it? We need to bring wealth to these communities.

You’re known for walking through your neighborhood in Mattapan each week and cleaning up the area with a gas-powered leaf blower strapped to your back. What do your neighbors think?

Long before I was a state rep I did this, because I take pride in my neighborhood. Sometimes people give me a look because of all the really loud noise the blower makes. But other times my neighbors take the opportunity to come up and talk with me about issues that are on their minds.

Bottom-line it for me in one sentence: What is your underlying philosophy as you go about doing your legislative work?

It’s very simple: I believe that ideals should win the day.