Out of Town News, a Harvard Square Fixture for 60 Years, Has Closed

The Harvard Square institution closed for good on Halloween. 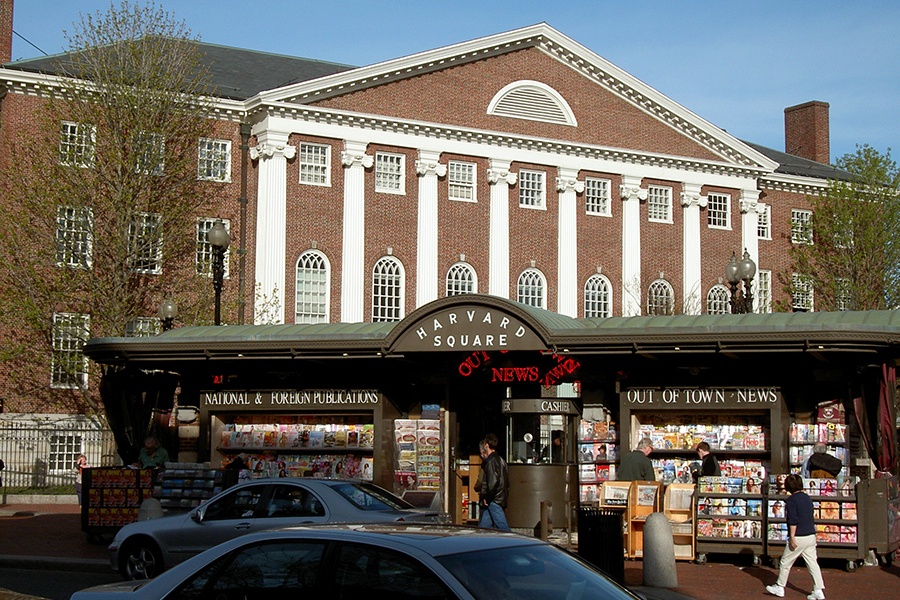 Update, 11/1 11 a.m.: Out of Town News officially shut its doors for good on October 31, according to multiple reports. “We are like family,” Mohammed Rahman, who has worked at Out of Town for 22 years, said of his coworkers on the newsstand’s last day in operation. “I feel very sad in my heart.” Arts programming nonprofit Culture House is set to temporarily take over the space starting sometime in November or December, per the Boston Globe.

It outlasted the World’s Only Curious George Store, Tealuxe, John Harvard’s, and Crema Cafe. It survived as the Boston Evening Traveller, the Boston Post, the Boston Phoenix, and the Improper Bostonian folded. There were whispers of closures in 2008 and 2016, but still, it stayed.

Now, however, it looks Harvard Square’s Out of Town News newsstand is really taking its final bow. As first reported by the Cambridge Day, renovation plans for the square have pushed the Cambridge fixture out of its iconic structure to make way for a new visitor information booth—and while renovations aren’t scheduled to begin until the spring, the stand will likely sell its final newspaper by October 31, according to leasing documents. In the interim, the stand will be replaced by “artwork,” the Department of Public Works says.

While the structure that houses Out of Town will remain intact (it’s listed on the National Register of Historical Places), this is the end of the road for the newsstand itself, which has been in operation in the square for over 60 years. 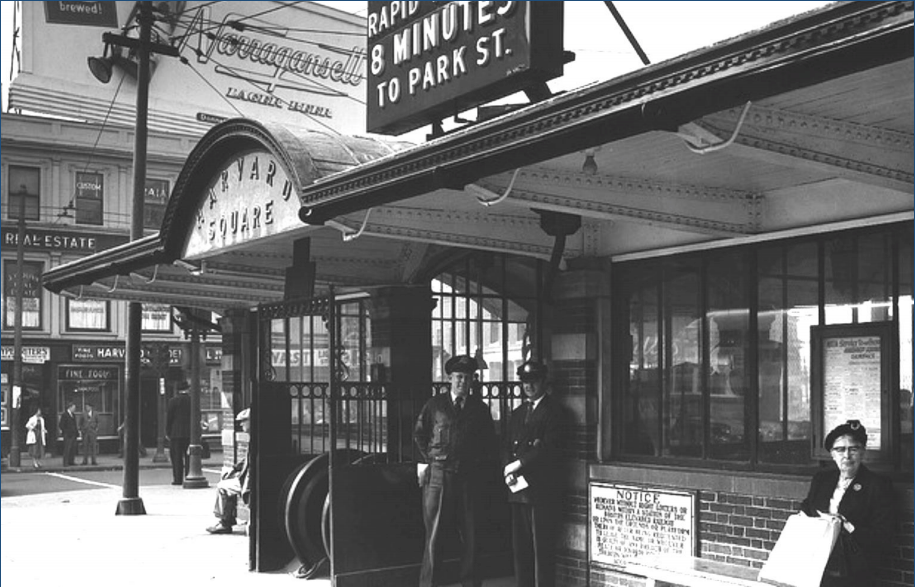 1955: The Harvard Square Kiosk that would later house Out of Town News. Courtesy of Cambridge Historical Commission Collections. 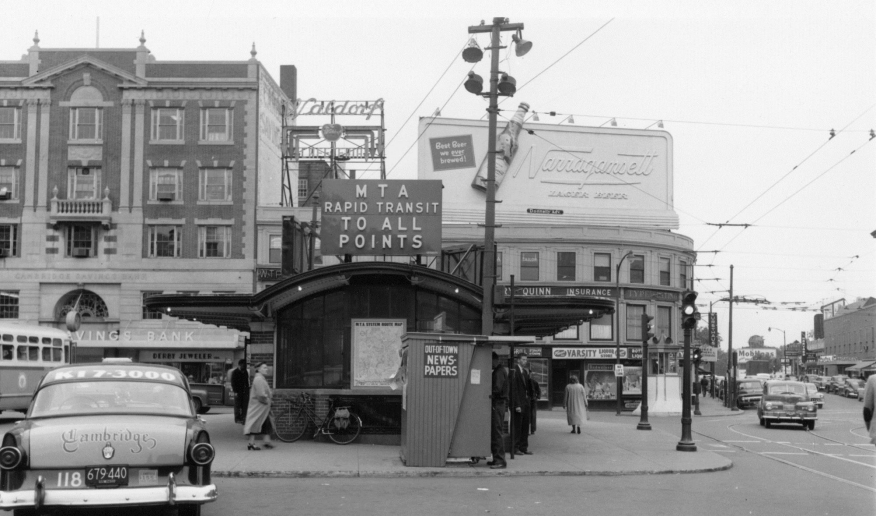 Out of Town News was founded in 1955 by Sheldon Cohen, who would later earn the title of the “Unofficial Mayor of Harvard Square” for founding one of the Square’s most beloved businesses. Cohen and his father used to hawk newspapers outside the square’s T station, and after his father died, Cohen kept up the family business by establishing Out of Town News and employing young Cantabrigians (including former Mass. senator and Cambridge mayor Anthony D. Galluccio) to sell papers on the street, as he once did.

The newsstand first lived in a small building adjacent to its current location, which was an entrance to the Harvard Square T station at the time. It moved into the structure in 1985, where it quickly became known for its vast selection of international newspapers, obscure journals and hobby publications. In its heyday, the stand sold up to 600 London papers on Sundays and 1,500 Irish papers a week. 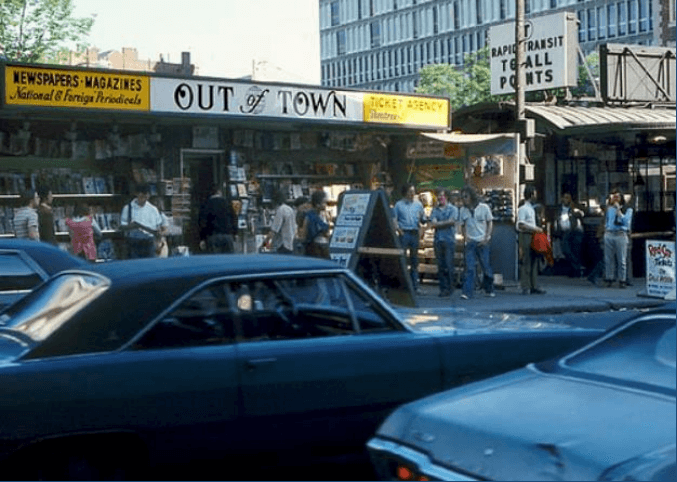 The Out of Town News Kiosk in 1985 before its move into the former Harvard Square subway head. Courtesy Cambridge Historical Commission Collections. 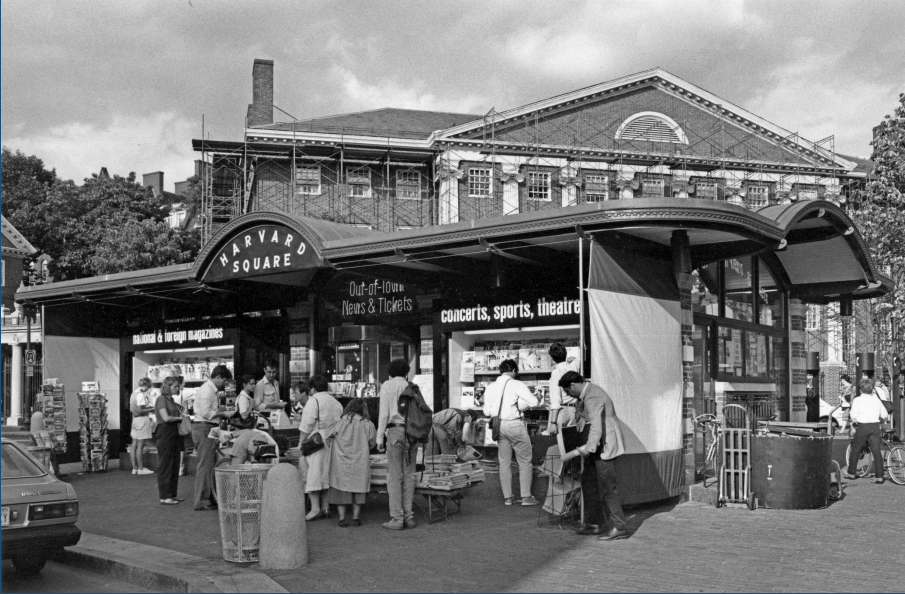 The Out of Town News kiosk after its 1985 move. Courtesy Cambridge Historical Commission Collections.

But, of course, that heyday has come and gone. In recent years, sales have faltered, with most visitors skipping over Italian Vogue and Foreign Affairs to the newsstand’s convenience store items.

“The world has changed,” John P. DiGiovanni, a developer and president of the Harvard Business Association, told the New York Times in a 2016 story about Out of Town’s future. “People are not getting their news that way.”

So, Out of Town News has become, in recent years, a spot for tourists to buy tickets for guided visits around the Yard and hip undergrads to stock up on cigarettes. But it’s also the place where Julia Child used to browse for German and Italian cooking magazines and John Kenneth Galbraith picked up his daily Le Monde. Robert Frost once stopped by to get directions to a reading.

And in January 1975, a 21-year-old man named Paul Allen was browsing the kiosk when he came across that month’s Popular Electronics, whose cover featured a photo of the “World’s First Minicomputer Kit.” He bought the magazine so he could show it to a friend—Bill Gates.

“I can still remember grabbing the Popular Electronics as if it was yesterday,” Allen said in 2008.

In making this sale, did Out of Town News unwittingly bring about its own demise? Now, 44 years after Allen left the stand with Popular Electronics in hand, crowds mill around Out of Town News, glued to phone screens that offer more access to the world than a 500-square foot kiosk in Harvard Square ever could. It’s hard not to notice—and be a little saddened by—the irony.