Boston Coronavirus News: “Unprecedented” Unemployment, Schools Will Stay Closed, and Our Congresspeople Might Have COVID 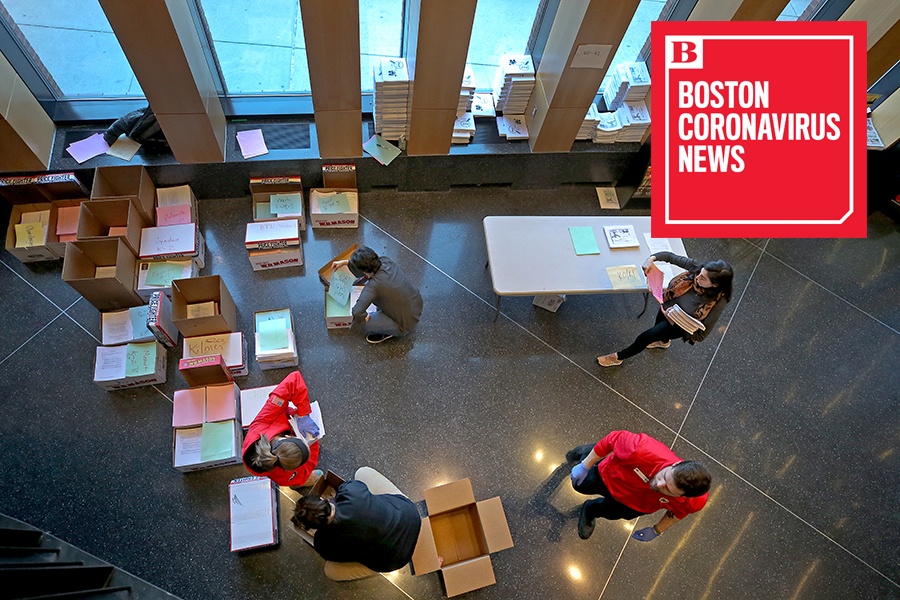 With the help of City Year volunteers, Boston Public School teachers and volunteers help deliver printed packets to Boston schools for students to take home and do homework at the Bolling Building in Boston on March 16, 2020.  (Photo by David L. Ryan/The Boston Globe via Getty Images)

Confirmed cases as of March 25

The State School Shutdown Drags on

All public and private schools, along with all non-emergency daycare facilities, will now be shut down until Monday, May 4 at the earliest, Governor Charlie Baker announced Wednesday afternoon. Previously, schools had only been ordered closed until April 27. While this closure extends into the week beyond spring break on many school calendars, Baker made it clear that this additional week is—sorry, students—”not an extended school vacation.” Educators are tasked with developing further materials to guide students through the month of April, and caregivers are also encouraged to engage students in project-based learning experiences at home. Baker also announced that WGBH will be partnering with the state to both launch online resources for students and to televise educational content between noon and 5 p.m. on weekdays. “We understand that not every district and not every student has the same access to computers, the Internet, and tablets,” Baker said.

Grocery Stores and Pharmacies Can Stay Open, But with New Rules

In the same press conference, Baker also announced tighter sanitation rules for grocery stores and pharmacies, two of the few remaining places where people congregate in large groups. All grocery stores in the state are now required to provide an hour a day for adults over 60 to shop. They must also mark “a social distancing line” at checkout, close all self-serve food stations, and offer sanitation options like sanitizer or wipes so customers can clean their carts and hands. Following a reusable bag ban in Cambridge earlier this week, shoppers statewide are now prohibited from using personal reusable bags to bag purchases, and stores cannot charge for single use bags.

Healey on Jeremy Jacobs: “This Is Shameful”

Delaware North, the company that manages TD Garden, has announced an impressively shady plan for compensating the Garden and Bruins workers who have been impacted by the coronavirus crisis—and Attorney General Maura Healey wants to make it very clear that she has her eye on it. First, the company announced it would set aside $1.5 million to pay part time Bruins and Garden employees for missed home games, but not until the games were canceled officially, a process that could take months, if it happens at all. Healey called out Jeremy Jacobs, the billionaire owner of both the Bruins and Delaware North, for the lack of detail in this plan. “Don’t think for a second I’ve forgotten about this,” she penned on Twitter.

Don’t think for a second that I’ve forgotten about this. Jeremy Jacobs has yet to provide the details of this plan to support TD Garden workers. Will Delaware North commit to paying them now, when they need it? How will employees apply? We can’t afford to wait. https://t.co/pbXrrE0ozi

Delaware North then laid off hundreds of those part-time workers, placed 68 full-time salaried associates on temporary leave, and reduced the salaries of 82 others. Healey, needless to say, wasn’t impressed.

“Jeremy Jacobs is one of the richest people in the world,” Healey tweeted. “This is shameful.”

Jeremy Jacobs is one of the richest people in the world. This is shameful.

Workers should contact our office to ensure their rights are being protected throughout this. As a fan, I am deeply disappointed. https://t.co/TcN23B4qZh

Following an order from the governor last week that closed schools and basically brought the service industry to a halt, nearly 148,000 Massachusetts residents filed for unemployment benefits, the Boston Business Journal reports. For comparison’s sake, during the worst week of the 2008 recession, only 22,028 people in the state made claims. There are, of course, some differences here—layoffs during our current crisis came all at once thanks to the state of emergency, while they came in waves in 2008—but the numbers are still pretty stunning. Layoffs will also certainly climb as time goes on—as of now, Baker has ordered all nonessential businesses to stay closed until April 7 at the earliest.

Seth Moulton Has COVID Symptoms, But Couldn’t Get Tested

He has a low grade fever and “concerning tightness” in his chest, but was told he didn’t qualify for a test, and has been instructed to self-isolate instead. The news came a day after the Salem congressman introduced a pretty-problematic-sounding resolution in the House that condemns China for making “multiple, serious mistakes” in its response to the coronavirus and calls on the Chinese government to declare that COVID-19 originated there.

Ayanna Pressley Could, Though

After experiencing flu-like symptoms, the Congresswoman is awaiting her test results, a spokesperson for the rep said in a statement yesterday.

And BU Sees Its First Cases on Campus

The Hotel Industry Has Been Ravaged

An analysis by a Boston hotel consulting firm shows that Boston’s hotels, normally at about 80 percent full this time of year, now have single digit occupancy rates thanks to citywide closures and event cancellations. “It’s striking how quickly this happened over just a few days,” Sebastian Colella, the report’s author, told the Boston Globe. “All of their usual channels [of business] were just shut off immediately.” The worst part? There’s no telling when the crowds will return. Conventions and other large-scale events have all been canceled through May, and commencement ceremonies are slowly but surely following suit.

But Hey, Emissions Are (Kind of) Down!

If you were hoping that we were at least combatting climate change by staying inside and never going anywhere, I’ve got some bad news: Preliminary data from greenhouse gas scientists at Boston University and Harvard show that there has not been a significant decrease in carbon dioxide or carbon monoxide emissions around the city since lockdown began. Only about a quarter of the city’s greenhouse gas emissions come from cars, researchers told WBUR, and the other sources of emissions (buildings, homes, the soil) are still producing. However, one pollutant has been noticeably reduced: nitrogen dioxide, a gas that comes mostly from tailpipes. We’re going to chalk this one up as a win.