Traffic Plummeted During the Pandemic. Boston Should Keep It That Way

Transit experts say there are a series of actions the city can take. 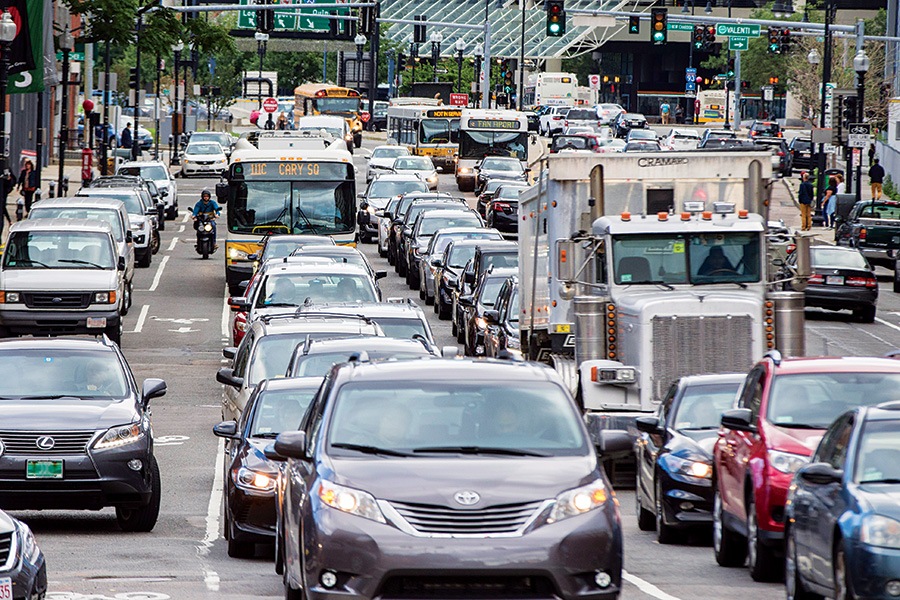 One of the eeriest parts of the pandemic has been the vacant streets of cities across the globe, as traffic disappeared while people stayed home. At the peak of the lockdown, downtown Boston was seeing only 60 percent of its usual traffic levels. As the city tentatively started to reopen this summer, streets were getting used in new and creative ways—al fresco dining on Hanover Street, enhanced bike lanes throughout the Back Bay. It provided us with a small peek into what we could do if we outfitted our cityscape for people, rather than cars.

But as the pandemic drags on and people remain hesitant about getting back on the T, traffic levels have started to creep up. It’s cause for concern. “Transit is foundational for the city,” says Chris Osgood, Boston’s Chief of the Streets, Transportation and Sanitation. “It is a sort of public infrastructure that allows for Boston to be this global hub of innovation; to bring people from a wide geography together.”

Transit advocates say Boston is at risk of missing an opportunity to fix its infamously worst in the nation traffic issues, and seize this moment to implement a variety of long-gestating ideas to improve the livability of downtown areas, while addressing inequality. Here, they share what Boston should be focusing on before it slips back into its pre-pandemic traffic problems, and how it can take some of the lessons of the pandemic to become a more equitable and healthier place to live.

Satisfaction with the MBTA was already at a nadir before the pandemic, with riders outraged by its repair backlog and frequent delays. Now, the MBTA is confronted with a new issue: people are afraid to pack onto crowded subways and buses altogether. But the evidence doesn’t suggest there’s more danger to using public transit than carrying out other everyday activities, says Dr. Tracy Corley, MassINC’s transit-oriented development fellow. “We are using fear mongering anecdotal stories to talk about what’s going on with transit in the United States, because we don’t have enough robust contact tracing to actually say whether cases are tied to transit,” she says.

While recent studies show little evidence of public transit systems serving as super-spreaders, Chris Dempsey, the director of Transportation for Massachusetts, says one easy way to emphasize the safety of public transit would be for Charlie Baker and Marty Walsh to get on the T themselves. “Those are elected officials who have earned the trust of the public over the [shutdown], and who are seen as credible in the way they’re approaching this really difficult problem,” he says. “People will look to them as leaders or a symbol that the system is safe to ride.”

2. Repurpose streets to serve people, and not cars

Car-free roads, (masked) pedestrians casually strolling from patio to patio, and lingering conversations between neighboring shop-owners—it sounds like a 19th century painting, but in the COVID era, it’s increasingly the reality for businesses starved for patrons wary of indoor spaces. And the city should resist any efforts to roll these initiatives back, particularly if they want to rescue small local businesses, says Jim Aloisi, the former Secretary of Transportation and board member of TransitMatters. “People want to know they can be in a dense urban environment and not be crowded,” he says. “I just firmly believe if we’re going to get out of this pandemic, and we’re going to fund small businesses in particular, you’ve got to make the streetscape different.”

There are now over 400 restaurants in Boston that provide outdoor dining, with more than 350 of them utilizing streets and sidewalk space. The city’s Healthy Streets initiative has also set up protected bike lanes through downtown and expanded bus stops and bus lanes on heavily trafficked routes. Go Boston 2030, the city’s comprehensive transportation plan, sets the lofty goal of every Bostonian being within a 10-minute walk of transit, bike share or car share services. “This is really about steps we can take that support our residents around the twin components of a healthy reopening and equitable recovery in our city,” Osgood says. “We’re focusing on a lot of things that make sense today, but will help us achieve our long-term goals as a city.”

3. Treat public transit as the urgent racial equity issue it has always been

A 2017 report from the Metropolitan Area Planning Council found that Black commuters in Boston spend 64 more hours per year on the bus than white riders. This stark inequality can have a vast range of deleterious effects on people’s lives, which is why we should be viewing good transit as a public necessity, explains Stacy Thompson, CEO of Livable Streets. “It’s not about nickel-and-diming people to pay a fare. It is essential,” she says. “It got doctors and nurses to the Longwood area. The only reason people were able to stay home is because a heck of a lot of people weren’t, and those people take transit. That mental shift of transit being the backbone of our economy, and truly essential like education and healthcare, that’s where we need to go.”

Transit equity also enhances environmental justice, and we’re not only talking about carbon emissions. A Harvard study finds people with Covid-19 who live in regions with high pollution are more likely to die from the virus than people who live in less polluted areas. Locally, we’ve seen the coronavirus hit communities such as Chelsea, Revere, and East Boston the hardest. Those areas also deal with a suffocating amount of congestion, and getting cars off the road is a vital step in improving the health of the people who live there. “What do we need to learn?” Aloisi asks. “A year ago, people like me were talking about sustainability and the climate, which is still true. But now, it’s a public health imperative. What is it that we don’t get about this?”

If people are going to change their behavior, they need more options. That’s why many transit advocates, including Osgood, champion a Regional Rail service, with Commuter Rail trains operating every 15 minutes in and out of Boston. “This would mean really thinking about how the Commuter Rail can really be an Urban Rail, running 15-minute frequencies all day that you don’t have to schedule your life around, but can rely on with your schedule,” Osgood says. “That would really be a game-changer for the region.”

Of course, a lofty goal like Regional Rail would require raising revenue, which is always difficult to achieve politically—never mind in the midst of a pandemic. But gas prices continue to fall, and ironically, Aloisi says that makes this an ideal time to raise the gas tax. “The reality is, most people who are driving and parking today are probably working,” he says.

Companies have a role to play, too, assuming employees eventually return to their offices. One of Aloisi’s students at MIT—where he is a lecturer of Transportation Policy and Planning—did a survey of 405 commuters in Metro Boston. Over 73 percent of respondents said their employer helped them with parking costs. Instead, Aloisi says those companies should subsidize public transit: “That’s just crazy policy.”

5. Support transit use instead of work from home incentives

With office towers in Boston seeing occupancy rates hover at around five percent this summer, it’s tempting to wonder whether working from home can be a permanent solution to our congestion woes. But that ignores the severe economic repercussions of white-collar workers not commuting into Boston each day and eating lunch out, shopping at stores, and more. Dempsey says it infuriates him when state leaders promote higher subsidies to telecommuters than to users of public transit, such as when Gov. Baker proposed a telecommuting tax break for employers. “It’s really sort of surrendering, and saying, ‘We don’t really have any better solutions, so we’re going to pay people to not use our system as well,’” he says. “‘We run our system so poorly, we’re going to pay people not to use it.’”

We should want people to return to their offices once it’s safe to do so. The best way to do that is to invest in transit, and make it a centerpiece of Boston’s COVID recovery. “When you think about one of the hallmarks of Boston’s economy —the innovation economy, our focus on education, our delivery of healthcare, and this hospitality and cultural Mecca —a lot of those things require people to be together for them,” Osgood says. “The things that were essential to making our economy and making Boston the vibrant place it is are still going to be huge in the future, and an investment in transit is essential for the future.”