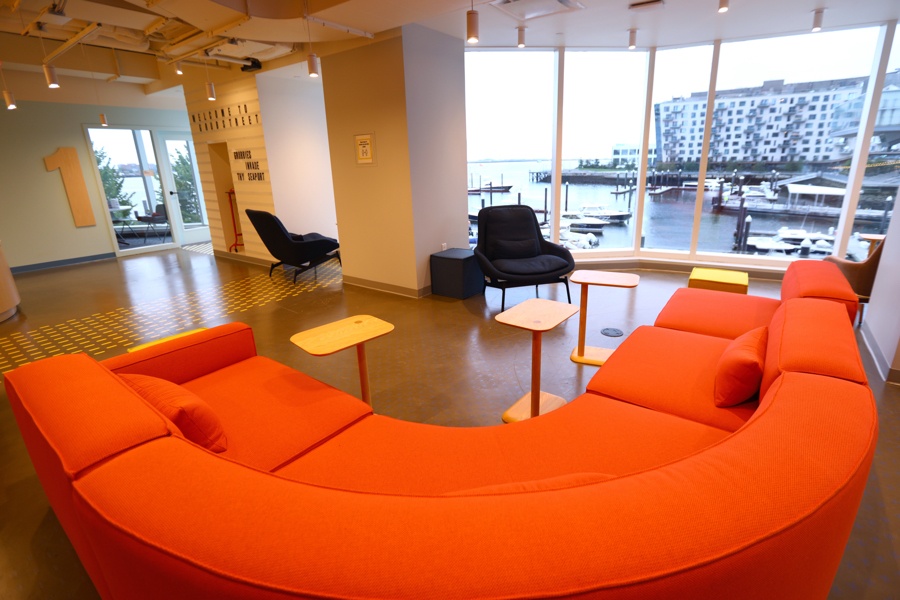 The new Grub Street space in the Seaport District of Boston, at 50 Liberty Drive. (Photo by Pat Greenhouse/The Boston Globe via Getty Images)

You guys done talking about the “Bad Art Friend” yet? No?

Well, neither is GrubStreet, the Boston-based creative writing center whose members are the main characters in the incredible New York Times Magazine story that no one can stop talking about.

There has been a temptation to pick sides in the bewildering ordeal, which centers on a debate over a repurposed Facebook post in a short story, but really that’s not what “Who Is the Bad Art Friend?” is about. Instead, it’s a portrait of in-group dynamics, an ugly up-close look at the petty cruelties some local writers exact on one another, and how conflicts like these escalate when social media and snarky group-chats are involved. Who is right or wrong in this particular case is beside the point…not that that’s stopped anyone on Twitter, Facebook, or at your local grocery store from taking sides.

To say the story has become a phenomenon is an understatement. It has been especially appealing to readers in Boston, as all of its action takes place here: There are scenes set at Trident Bookstore, a small news item in the Boston Globe plays a role, bestselling author and Cambridge resident Celeste Ng has a cameo, and at a critical moment, the Boston Book Festival gets dragged into the feud. It also contains several not widely known details about the way this city’s literary community operates; for example, that there is a group of adults among us who call themselves the “Chunky Monkeys,” for reasons not worth rehashing here. Suffice it to say that no one mentioned in this story comes out looking great.

At the center of much of the action, though, is GrubStreet, the 24-year-old nonprofit that offers classes for aspiring writers and hobbyists, and which is the social hub around which the complicated relationships at play in the piece revolve. So on Tuesday, after who knows how many millions of reads the Times story has racked up at this point, GrubStreet felt the need to reassure its members in an email that the “alleged behavior” outlined in the story does not align with “GrubStreet’s stated values,” that its members strive to treat one another “with care and respect,” and that “an independent expert” will investigate what exactly went down.

Here is the message it emailed to its members today, and has also posted on its website:

We would like to acknowledge that the past week has been difficult for many in our community. The New York Times piece published last Tuesday has generated a wide range of opinions, questions, emotions, and concerns.

Bluntly, we are appalled by the disconnect between GrubStreet’s stated values and the alleged behavior by some that has come to light. GrubStreet is meant to be a nurturing and supportive environment for all, a place where our creative work can thrive, and where we are each treated with care and respect. The events described in the article do not describe the environment we strive to create for everyone in our community.

As a Board, we take our role seriously. Recognizing that objectivity is paramount, we are engaging an independent expert to lead a process to gather information and conduct a full review of what happened. Our community’s health depends on being grounded in high ethical standards and a culture where we can respectfully engage and embrace different perspectives in an inclusive manner.

We know this situation has been challenging for all involved. We appreciate your patience as we work to address it constructively in the best interests of our wonderful organization.

Thank you for your support,

The GrubStreet Board Executive Committee

The timing of all this is not great. GrubStreet has been making a move from its location in Back Bay to a scenic space in the Seaport, the bottom floor of which is a sun-splashed café and bookstore run by Porter Square Books in sight of the ICA. WBUR published some more of the details this morning, and it’s clear that this is supposed to be a celebratory moment—an opportunity for the quirky writing collective to unveil a new and welcoming public face, an invitation to the broader Boston community to come into its fold. Instead, everyone’s talking about kidneys, lawsuits, white-lady entitlement, the peculiarities of intellectual property in creative fiction, and what exactly makes people drawn to creative writing workshops tick.

I’m sure plenty of people, maybe those with a less toxic relationship with their craft than the ones on display in the story, have nice experiences with GrubStreet. But the message received this week by anyone tempted to dip their toes into writerly communities in any serious way boils down to a warning: watch your back. And if you’re ever invited to a private Facebook group, tread carefully.