Why Are So Many Mass. Towns Pronounced Differently than They’re Spelled?

The answer comes from across the pond. 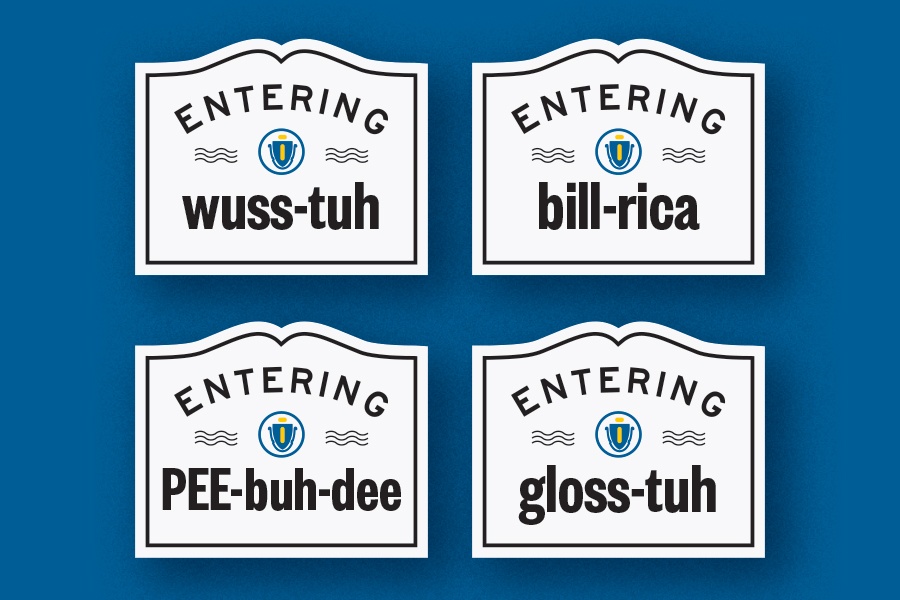 Though I can’t imagine saying them any other way, why are so many of our towns in Massachusetts—I’m thinking of Worcester, Billerica, Peabody, Quincy, and more—pronounced so differently from the way they’re spelled? —J.N., Hyde Park

Though I’m from New Haven, Connecticut, J.N., I grew up pronouncing Worcester as “wuss-tuh,” if not the more accurate “wuss-ta.” Perhaps spending my formative years in a neighboring state, particularly one with a name that’s famously not spoken as it’s spelled, opened my mind to the concept. But from a young age, I also knew how to pronounce Gloucester, Leicester, and Leominster as “gloss-tuh,” “less-tuh,” and “lemon-stuh.”

In fact, your question jogged a pleasant memory: my sixth-grade homeroom teacher, Mrs. Johnson, writing these names on the chalkboard and teaching us how to say them. Why, you ask? Well, we were learning local geography, but more important, Mrs. Johnson was British. And she took pride in telling us about how these screwy (my word, not hers!) pronunciations came from the motherland.

As my research shows, she was right; these place names came from their older English counterparts. What often happens as English evolves is a linguistic process called syncope, where people simplify awkward pronunciations by dropping unstressed vowels or even whole syllables—think words like “vegetable” or “Wednesday.” Apply that to clunky place names like Worcester, or to Billerica (“bill-rica”) and all the silent-H “ham” towns such as Dedham and Needham, and you can see how typical it is that we are hardly putting much “new” in New England place names.

Quincy and Peabody, however, reflect their local namesakes. Political paterfamilias Colonel John Quincy pronounced his name with a “z” instead of an “s.” And while the renowned philanthropist George Peabody was born in Danvers, half of the town was renamed after him and pronounced in a way some historians attribute to his family’s alleged heavy accent: “PEE-buh-dee.” These two pronunciations tripped me up when I first moved here, and various Massholes loudly let me know it. In fact, throw a rock on the Internet, and you’ll find countless listicles about how everyone mispronounces the state’s place names. It almost makes mockery of the ignorant seem like sport. And if there’s one sport that we love here in Massachusetts above all others, it’s telling outsiders that they’re doing it wrong.