When Did Boston Become a Doodle Town?

How Boston is leaning into the latest designer dog—and what it says about all of us. 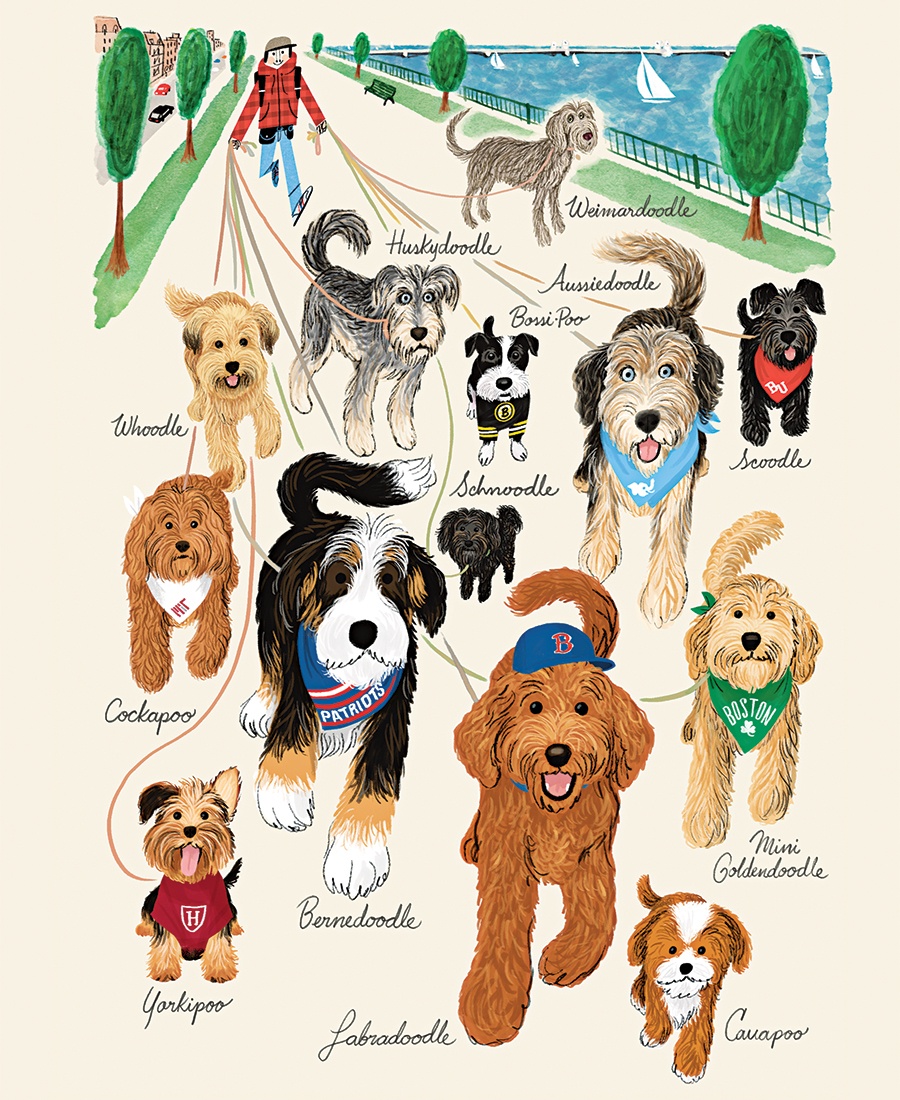 What kind of dog is it?

It’s the official dog of Antigua.

See his webbed feet, I say. They were bred to lead leatherback turtles safely into the ocean. There are only about 800 of these dogs left.

More intrigue and, as they slowly walk away, a look of, I need one of those right now.

Is the above true? Not one bit. My dog came from Texas, with a black coat, Sean Connery–white chest hair, and pointy ears with tips that he can flick. He looks like, you know, a dog, circa 2014. It might be hard to place him, because, what’s the word, what’s the word? Oh yeah, he’s got no “doodle” in him.

We’re sure because the DNA test said so. Zero Berne, golden, Labra, Aussie, dalma, or sheepa doodle. Not even a poodipoo, also known as the doubledoodle or superpoo, where you get the best parts of the poodle and the poodle.

That last part, also not true…yet. But I don’t see why they’re not six months away, since it seems any breed can be doodled up.

These dogs have taken over Boston—at least it feels that way. I was at a city park recently and, at first, saw none, and it terrified me. Because a Sunday afternoon sans doodles is a harbinger of bad, bad things, like a vicious snowstorm, followed by ice, or maybe Tom Brady retiring and not mentioning his 20 years here. But like people say about New England weather: If you don’t like it, wait one minute. Eventually, three doodles appeared, and with them, relief.

It wasn’t so long ago that doodles weren’t such a given. When Charlestown resident Georgia Cady got Stella 16 years ago and told a neighbor that her pup was a mini Labradoodle, the response was, “What’s that?”

That question will never be asked again, but I have three new ones: Why all the doodles? How did the poodle become the soda water of dogs? And why has it become Boston’s unofficial, official pooch?

Dog types have always been trendy. Doodles are just the latest dog to have their day, like the collies, beagles, and Jack Russell terriers before them. The amazing part is that the doodles haven’t recently had a hit children’s TV show in America to spread their gospel. The other amazing part is that they involve a poodle at all. Honestly, this is the greatest thing to happen to the breed, because when I was a kid in the ’70s and ’80s, poodles were the thing of older ladies, all coiffed and precious. (The poodles, that is.) People reacted to owning one much like they responded to someone getting a massage. “Oh, well, aren’t you special?”

Since then, nothing has really changed. Yes, poodles are smart and they’re smart and they’re smart, but they’re like the cranberry, our official state fruit—all tart and sour and unwanted if not for the added apple, grape, or benefit to the prostate. On its own, the poodle is totally niche, but the breed became more universally appealing once someone started partnering dogs up and creating hybrids. It’s so sexy and eco-friendly-sounding that it lets a potential owner feel good about going to a breeder and spending up to $6,000 to not get an actual purebred.

In fact, even the finest of doodles aren’t recognized by the American Kennel Club. To that group, doodles fall into the “All-American Dog” category, same as my dog and countless others. It’s another nice, sweet, face-saving name for what was once referred to as a mutt.

Doodle owners don’t care what they’re called. They don’t even care if there are 11 others dogs on their street with the same black-and-white checkerboard patterns. They have theirs, and they have their reasons.

No. 1, owners say, is because the dogs are cute. No, more than just cute—fuzzy, cuddly, teddy-bear cute. That’s what hooked Kerrie Carroll. The Quincy resident and founder of the Doodles of Boston Instagram page saw one on social media and knew, “That’s what I want,” and so she got Tucker, a mini goldendoodle, in 2017.

Want more proof? Actor Ryan Reynolds walked off his movie set in Charlestown because he had to meet the aforementioned Stella, Cady says. Ryan Reynolds. Have you seen him? He’s ultra cute and can meet any dog he wants, and he picked a doodle.

But cute ain’t it. All dogs are cute, even the ones who aren’t. The truth, and doodle owners know this, is that it’s about laziness—specifically a desire to not do housework every 30 minutes. These dogs don’t shed much. And that, along with being typically hypoallergenic, is why people love them, because if they made us itch and sneeze and left wads of fur on every rug, sweater, and couch, well, they wouldn’t be sooooo adorable anymore. As Carroll says, they’re “extremely cute,” yes, but the lack of shedding “was a game changer.”

Marc Lewis agrees. The South End resident has had two cats over the course of 15 years. He wasn’t done with pets, but he wanted to be able to travel, see friends, and “be welcome in the greatest number of homes.” The answer was Lulu, his mini goldendoodle, who mostly keeps her coat to herself.

And yet that’s still not the biggest reason for the popularity of these crossbreeds. A lot of doodle owners grew up with the non-doodle part of the equation, often a golden or Labrador retriever, and the love remains for that half but they just want something not so dopey. The poodle provides an IQ boost. Case in point: Though poodles were too “foo foo” for Nancy Sarkisian of Sutton—“I wanted a dog, a real dog,” she says—her two Australian Labradoodles give her the brainy-goofy combo she desired. “It’s the best of both worlds,” she says.

There’s more. Just like bottles of soda water, the poodle comes in different sizes—three, to be specific: standard, miniature, and toy, giving it maximum ability to address the classic concern of, “I love the husky, but can you take it in just a bit?”

The answer: Of course you can! It’s a poodle, for eff’s sake. And overall, the mix has been working. Golden- and Labradoodles have track records of giving people everything that they were hoping for. “They’re relatively healthy,” says Jerold Bell, adjunct professor of clinical genetics at Tufts University’s Cummings School of Veterinary Medicine. “So that’s one of the reasons why they’ve become popular.”

And they’re obviously not going anywhere.

I think part of the reason is the name. It’s pushy and trying too hard to be one of us, and we’ll reject that out of spite. It’s not like we don’t like to show our local pride; in fact, we do it with our dogs whenever possible. Go to any park, call out “Brady” or “Fenway,” and watch the pack come a-runnin’. But the Boston version of the terrier never took off like the doodle. Truth be told, the real “official” dog of these parts has always been the black Lab. They’re fun, lovable, friendly, everything that we’re kind of not. They’re our good public face, but apparently, they’re the landline of dogs. They were fine in this town when seemingly every restaurant not in the North End closed at 9 p.m. and you couldn’t buy liquor on Sundays. But now we’re fancy and modern. Solid and dependable won’t do. Neither will dopey. That quality plays fine in the outer suburbs, but it doesn’t fly in the land of higher learning.

Actually the doodle is the best logo for New Boston, a place that loves innovation and ridiculous valuations. It’s the perfect companion for getting a $14 burrito while wearing $120 workout pants.

Is it better than any other dog? No, and even doodle owners know that. But there is that low-shedding thing, a big check mark in the hybrid’s favor. We, as good New Englanders, love our work boots and will dutifully do our chores—and tell you all about our efforts afterward—but vacuuming? In what can only be described as a positively non–New Englandy thing to do, these doodle owners have decided to lose that one, make things, my God, easier, and not feel guilty about it.

That could be called a certain kind of progress.

It doesn’t mean we’re totally giving up the grind. Winter may be behind us, but it’ll be back next year, and we still gotta shovel, at least until MIT spits out the mini Alaskan malapoo—strong, great with kids, and able to eat snow in rapid time. They make an adorable yet intimidating space saver as well. Expect to see the beta version in January 2023.