This Tudor Home in Newton Gets a Vibrant, Feminine Redesign 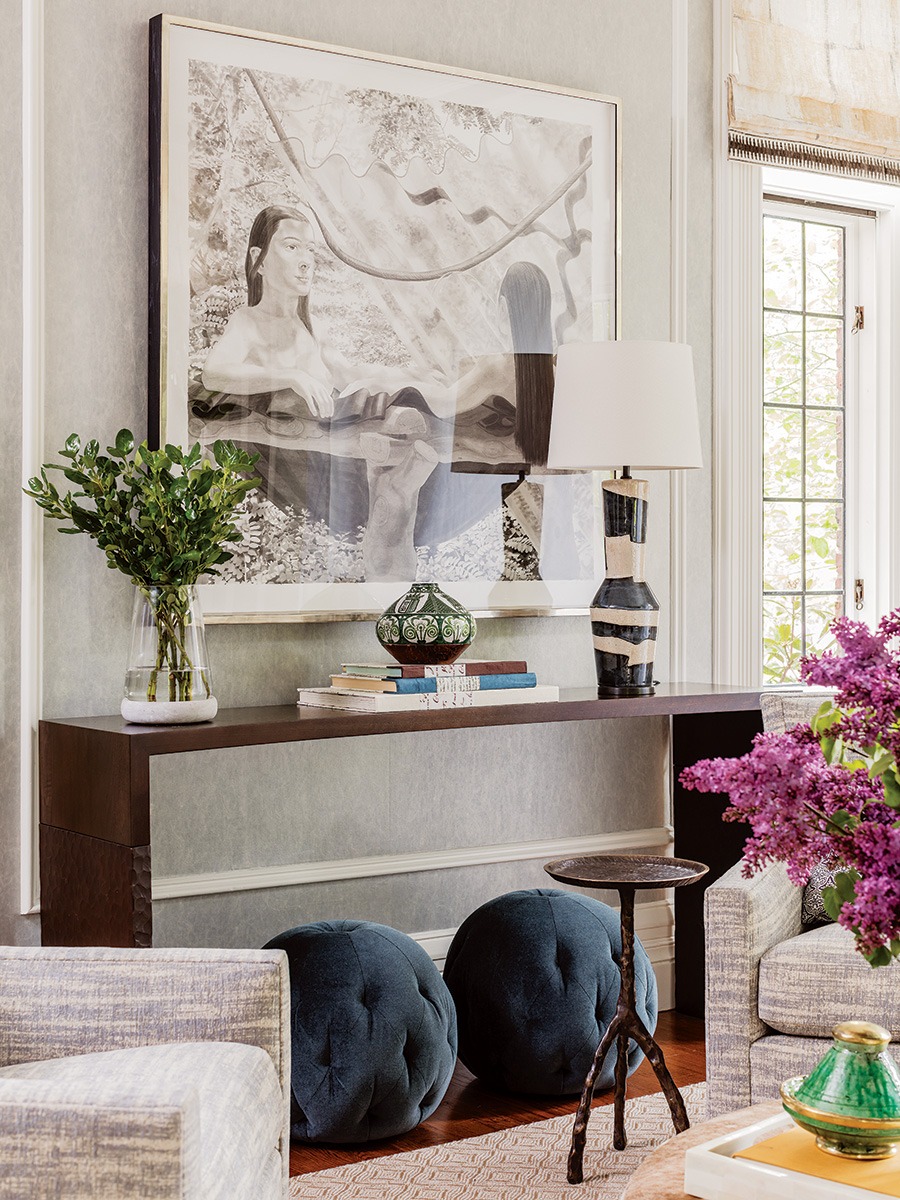 There’s nothing like working on a house with excellent bones. Especially when those bones include 19th-century millwork, five first-floor fireplaces, sky-high ceilings, and boatloads of crown molding—as was the case with the circa-1890, 7,000-square-foot Tudor Tiffany LeBlanc tackled in Newton. “[When I first] walked through, I was like, ‘I want this house!’” says the LeBlanc Design principal, who signed on to redesign the home in 2016. “It’s gorgeous. And you could tell that there was so much history in [the space].”

The only problem was the décor, which for a long time had felt a little too stuffy to the homeowner. She’d done work here and there in the 12 years she’d owned the house—painting; restoring the wood floors; renovating the carriage house—but in 2016 she realized the overall look wasn’t working for her, or her impending empty-nester lifestyle, anymore. “The house had a bit of a masculine tinge, with darker colors, antiques, and a more traditional look,” she says. “[I wanted it] warmer, lighter, and a little more reflective of who I am as a person.” Plus, she needed better functionality in the kitchen, where she and her Italian water dog, Hunter, like to hang out when her two sons are away at college.

So she and LeBlanc came up with a game plan to renovate the first floor, deciding to revamp the main rooms and save the heavy lifting for the kitchen. The existing historical features meant there wasn’t much need for structural change; instead, LeBlanc relied on modern textures, colors, and furnishings to brighten the space and offset the woodwork. “Part of our solution was to [make the space] more feminine by bringing in metallics and blush tones to soften all that heavy wood,” LeBlanc says. 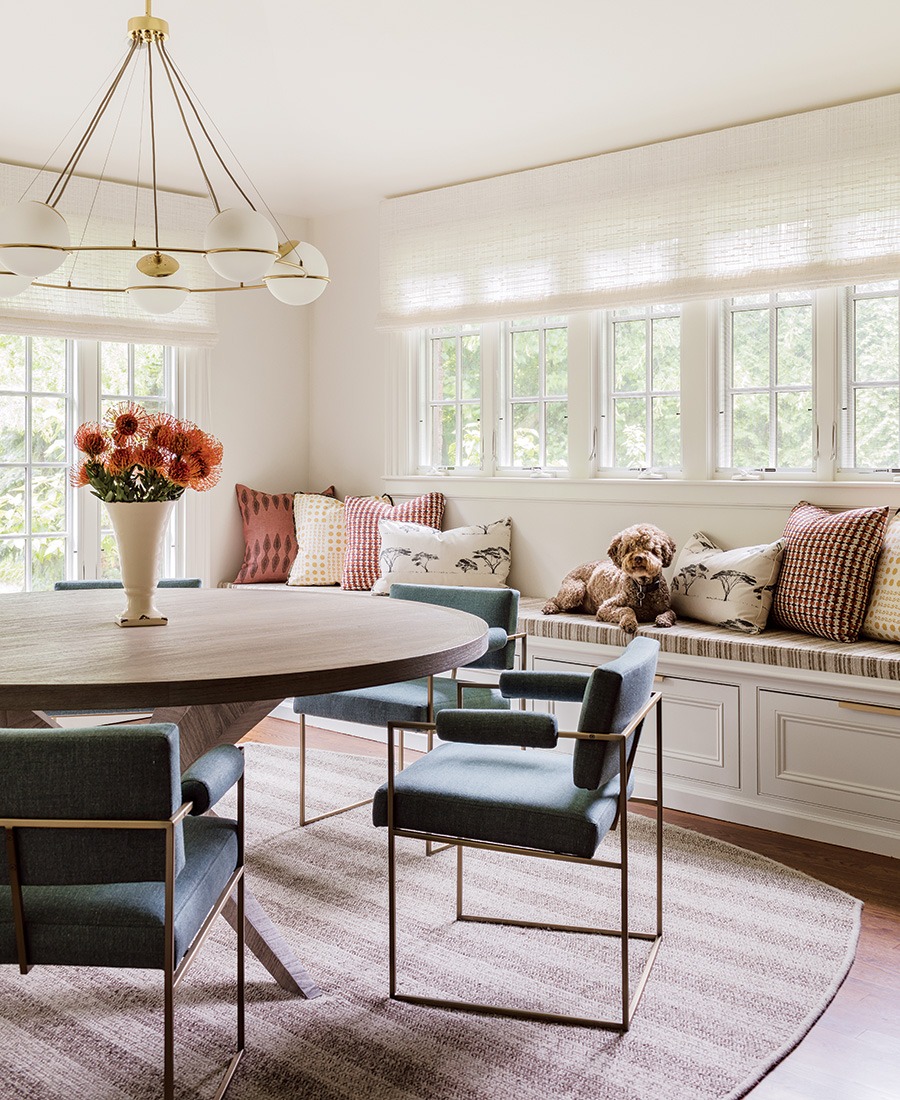 Walter Lane Cabinetmaker created the custom banquette where the family dog likes to perch. “He loves [sitting on] the bench to look out the window,” the homeowner says. / Photo by Michael J. Lee 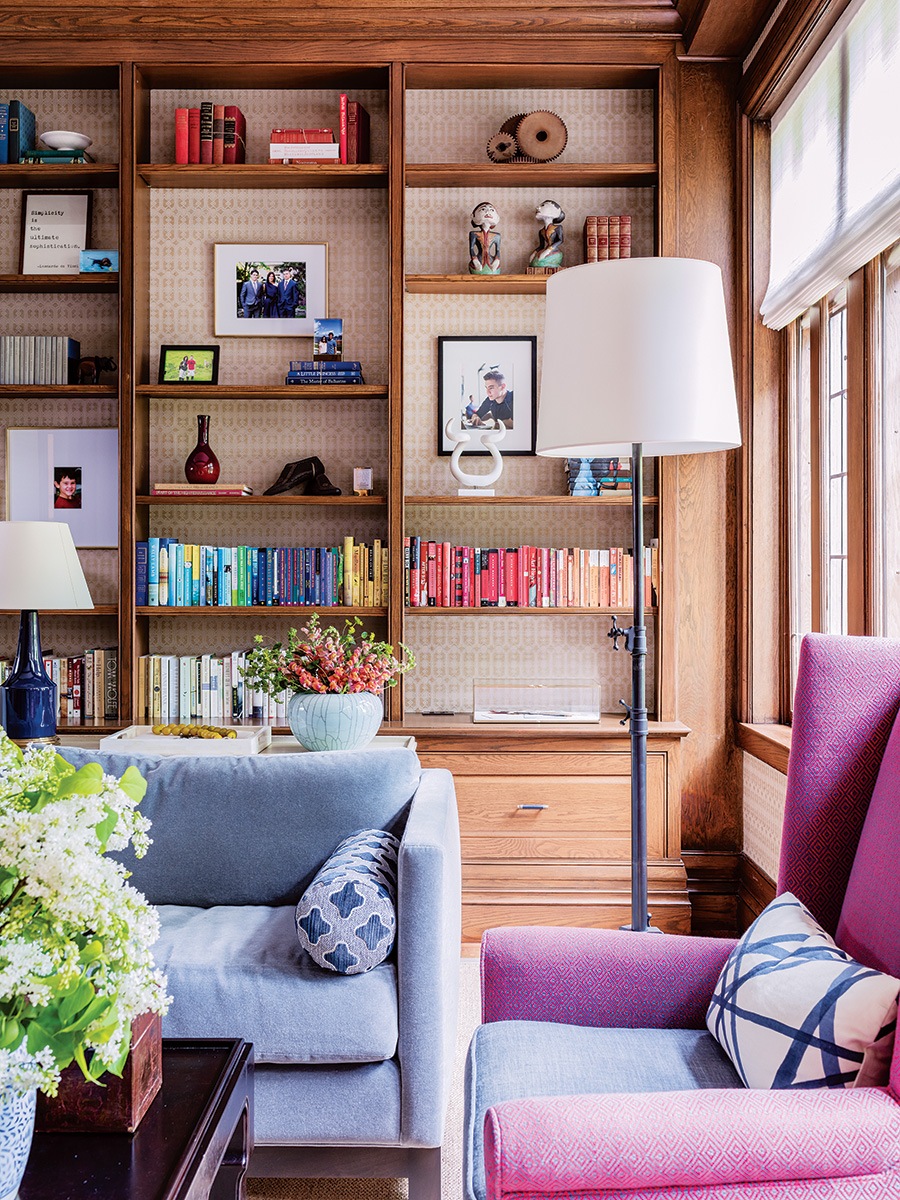 Blues and pinks in the library link the palettes found throughout the first floor. / Photo by Michael J. Lee 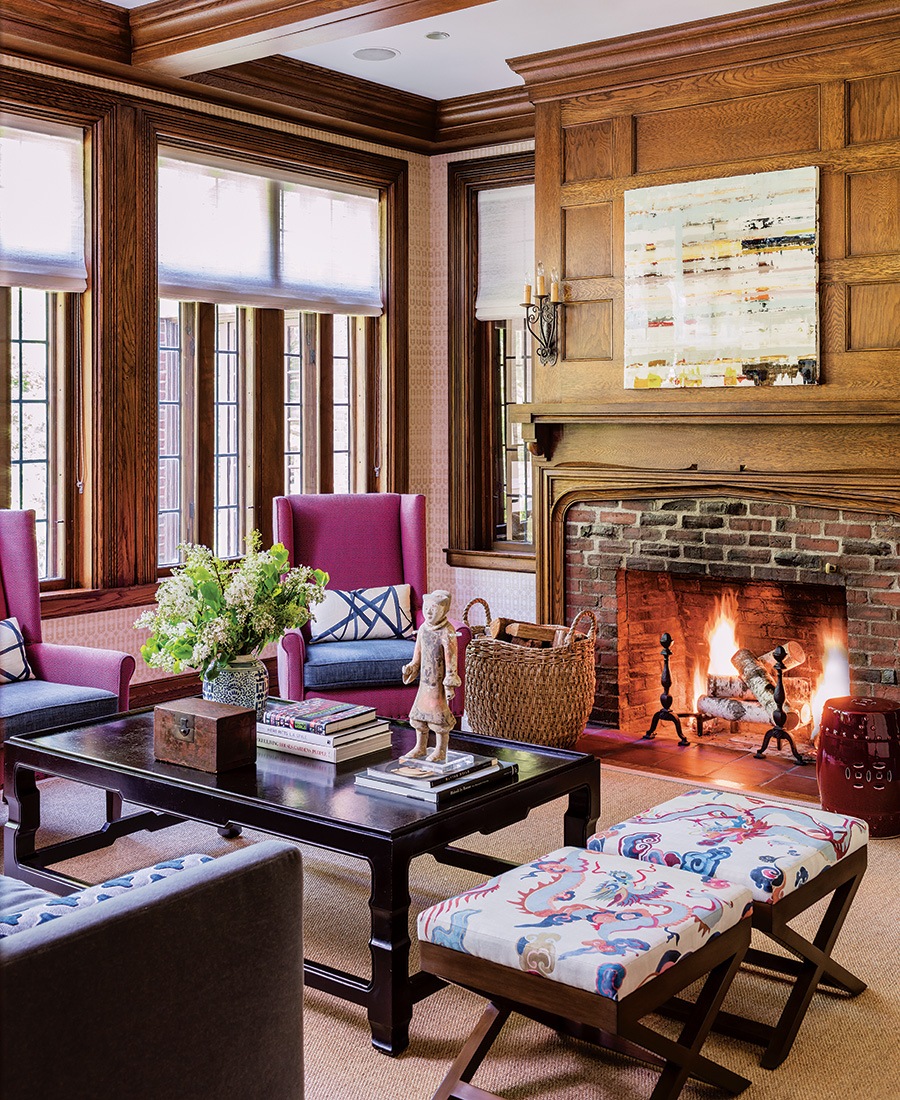 The library is the homeowner’s favorite room in the house, thanks to its cozy feel and displays of personal knick-knacks. It also holds LeBlanc’s favorite design detail, the metallic Holland & Sherry wallcovering. “I love, love, love it,” she says. / Photo by Michael J. Lee

Next door in the billiards room, LeBlanc curbed an old-school, gentlemen-only club vibe with delicate touches. She installed mirror–backed Urban Electric Co. sconces above the fireplace, and placed Corbin Bronze’s Renaissance Woman statue alongside it. She covered the hardwood floors—which LeBlanc calls a “big value,” but also dark and heavy—with a plush Jonathan Adler carpet that matches the midnight-blue felt of the pool table, which is inlaid with mother-of-pearl. 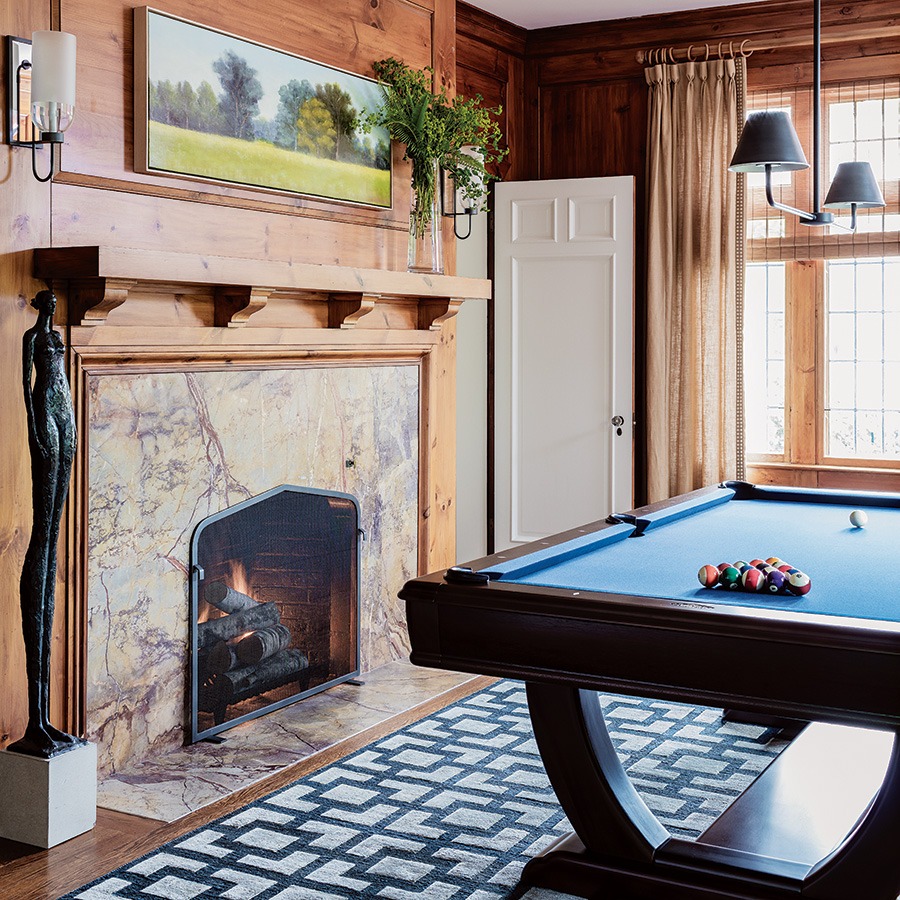 Sleek light fixtures from the Urban Electric Co.—the “Garrison” sconces above the fireplace and the “Double Arm” pendant light above the pool table —modernize the wood-paneled billiards room. / Photo by Michael J. Lee 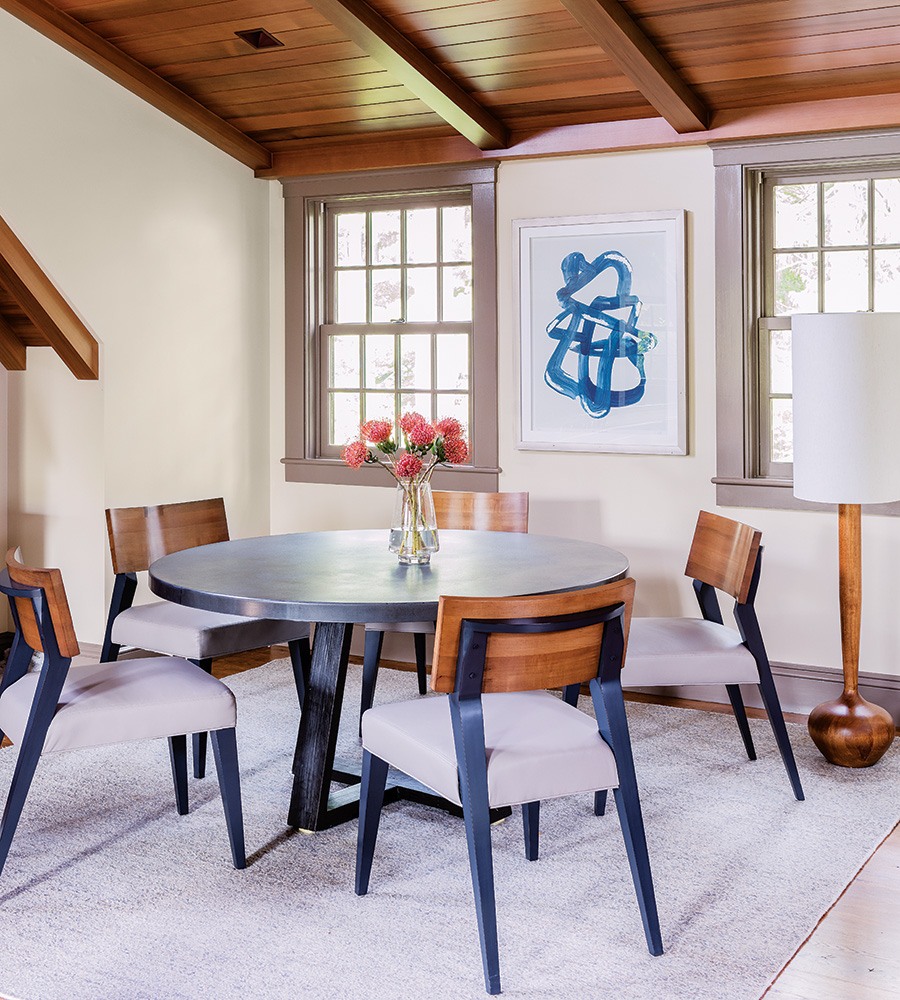 “[The carriage house] was largely designed with [my sons] in mind,” the homeowner says. “When they’re in town, that’s their go-to spot for hanging out with friends.” / Photo by Michael J. Lee 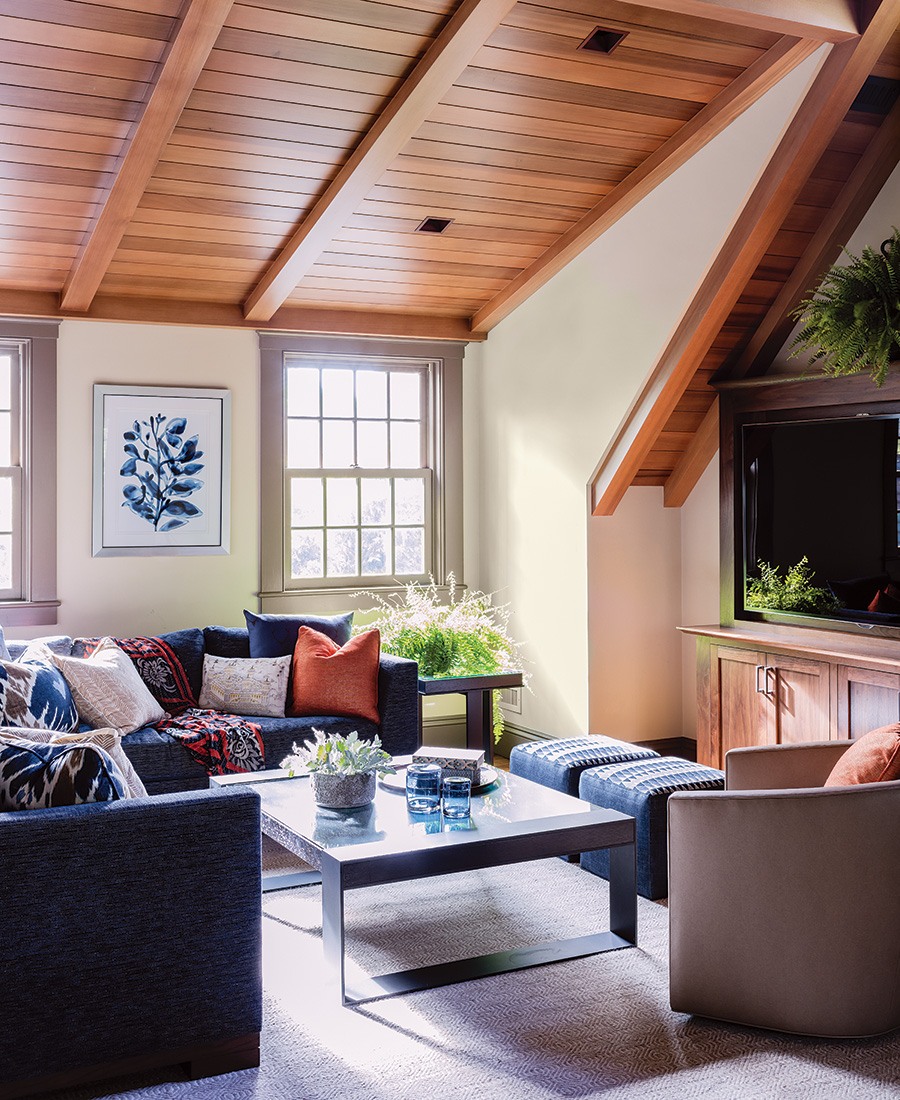 LeBlanc also worked her magic in the property’s carriage house, populating it with clean-lined furniture to create the casual and contemporary vibe the homeowner requested. / Photo by Michael J. Lee

The elegance continues into the sitting room. Here, LeBlanc balanced cool tones with warm accents, such as the gray Emerson Bentley swivel chairs that sit around a taupe brindle-and-suede Verellen ottoman. She livened up the crown molding by adding textures: A soft-blue Japanese rice cloth covers the walls, and black stone surrounds the fireplace and hearth. “The architecture is such a player that it set the tone [for the décor],” LeBlanc explains. “And for me, the interiors started to layer in the same way you should feel when you’re in the home: comfortable, playful, and a little colorful.” 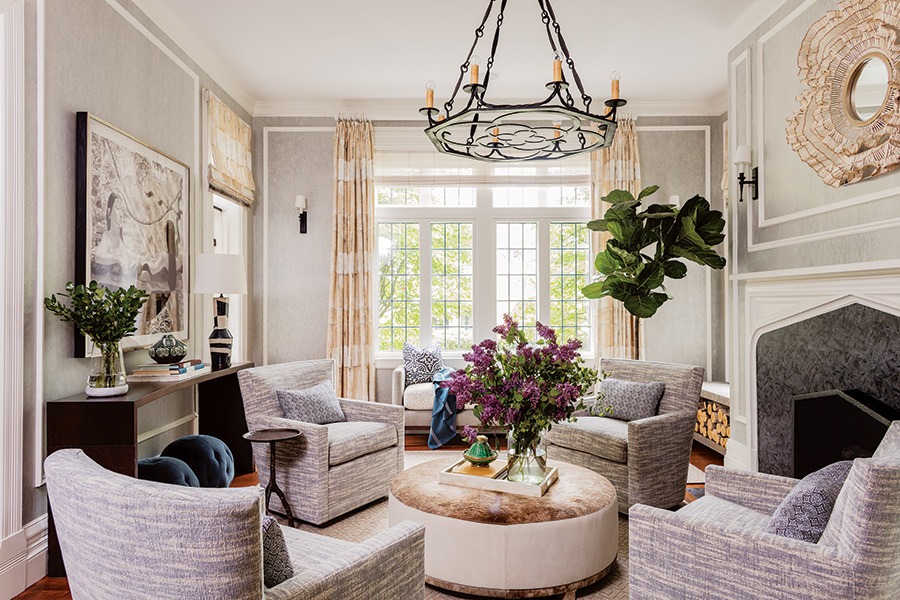 From the sitting room’s Merida flatweave carpet to the Palecek tripod table, each furnishing had to earn its spot in the home. “To equal the beauty of the architecture, we looked for things that had merit, like the house,” LeBlanc says. / Photo by Michael J. Lee

The heart of the renovation, however, was the kitchen. “I really wanted to lighten it up and streamline it, and make it more modern with simple lines,” the homeowner says. To accomplish that, LeBlanc stuck to a neutral palette, using a mix of metallic accents for drama, such as a shimmery Ann Sacks tile backsplash and a custom brass hood from Francois & Co. Newly installed beams add depth to the room, while also mimicking the woodwork in the rest of the house. For functionality’s sake, LeBlanc moved the appliances—a Wolf double oven, microwave, and range and a Sub-Zero refrigerator—to the same wall, in front of the quartzite-topped island. “The kitchen’s organization didn’t make much sense before,” the homeowner says. “It’s so much more central now.” 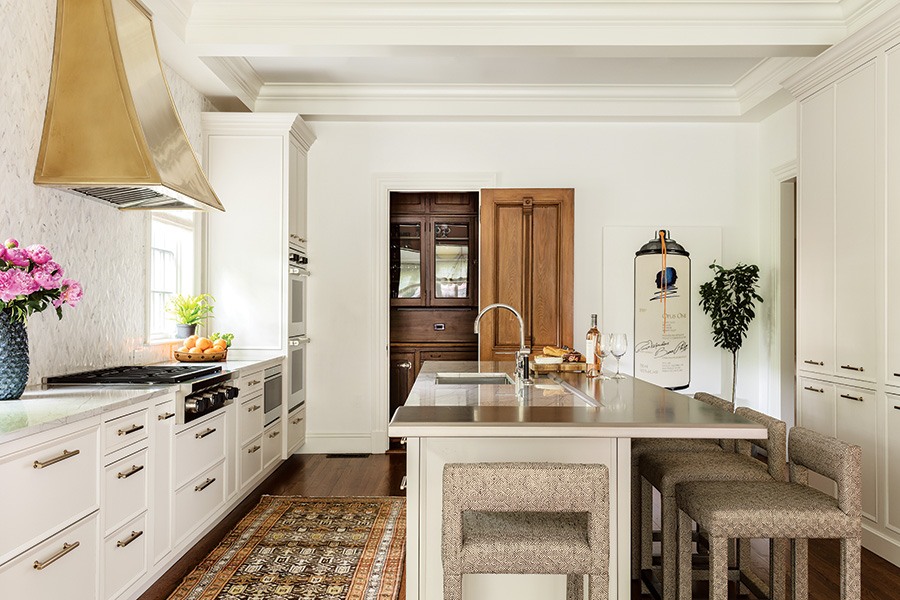 The revamped kitchen makes a perfect gathering space for family and friends: “I host a lot of big holidays, and it’s just really nice to have people in this clean, beautiful, kitchen,” the homeowner says. / Photo by Michael J. Lee 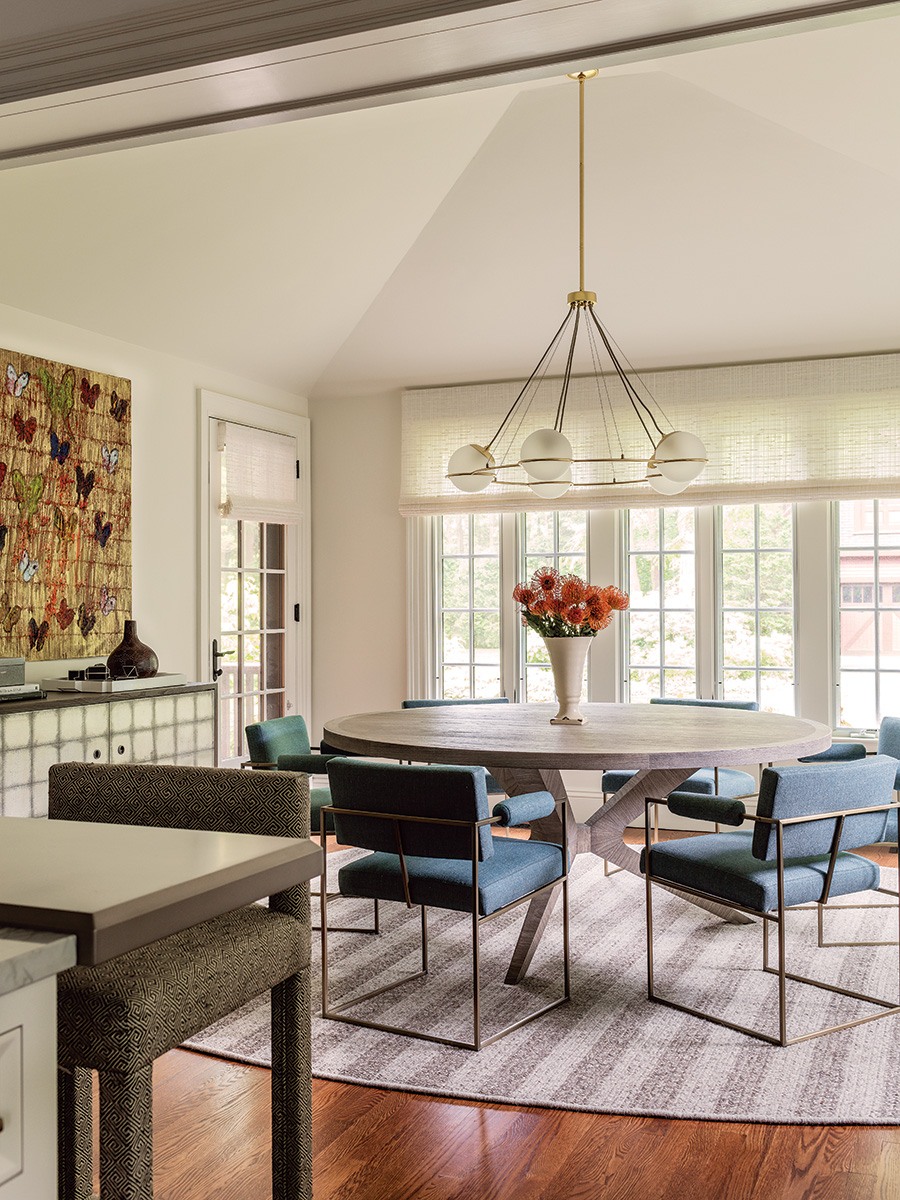 An Arteriors “Hathoway” chandelier, which echoes the custom brass Francois & Co. range hood, ties together the kitchen and the breakfast room. / Photo by Michael J. Lee

In the adjacent breakfast room, a custom banquette below a row of windows pulls triple duty as seating, storage, and a bed for Hunter. For a less-formal—but still polished—look than the dining room, LeBlanc chose a low-key yet luxe walnut dining table, which she paired with plush wool chairs and a brass-and-glass chandelier that echoes the kitchen’s hood.

With the redesign complete, the homeowner says, the house finally feels like it’s hers. Sure, there’s ample space for hosting family and friends, but more important, she and Hunter have plenty of spots to curl up and read. And she’s content with her cozy lifestyle: “It’s a big house for me; I think eventually at some point, I’ll make a change and move into the city or something,” she says. “But while the kids are still around, I’m here. And I love it. I mean, it’s home.” 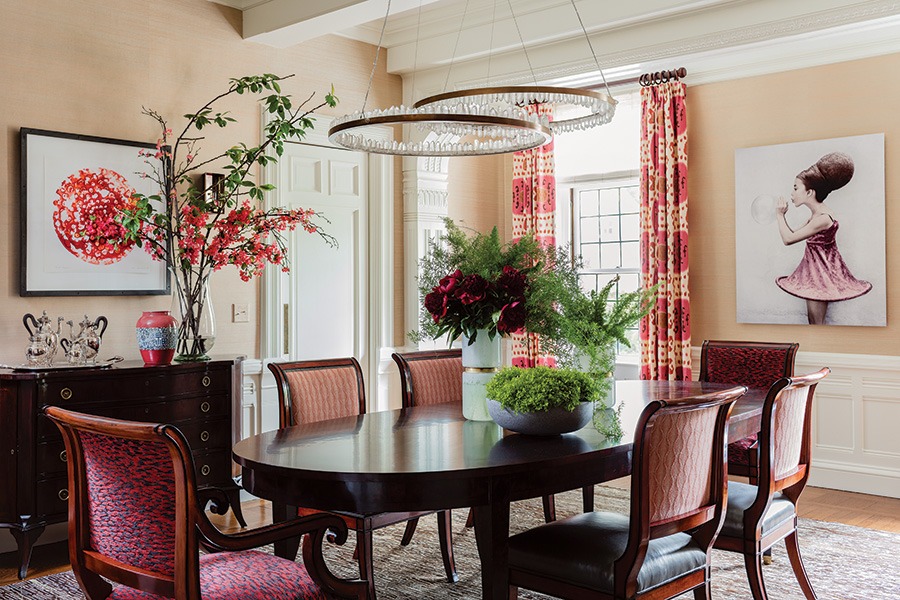 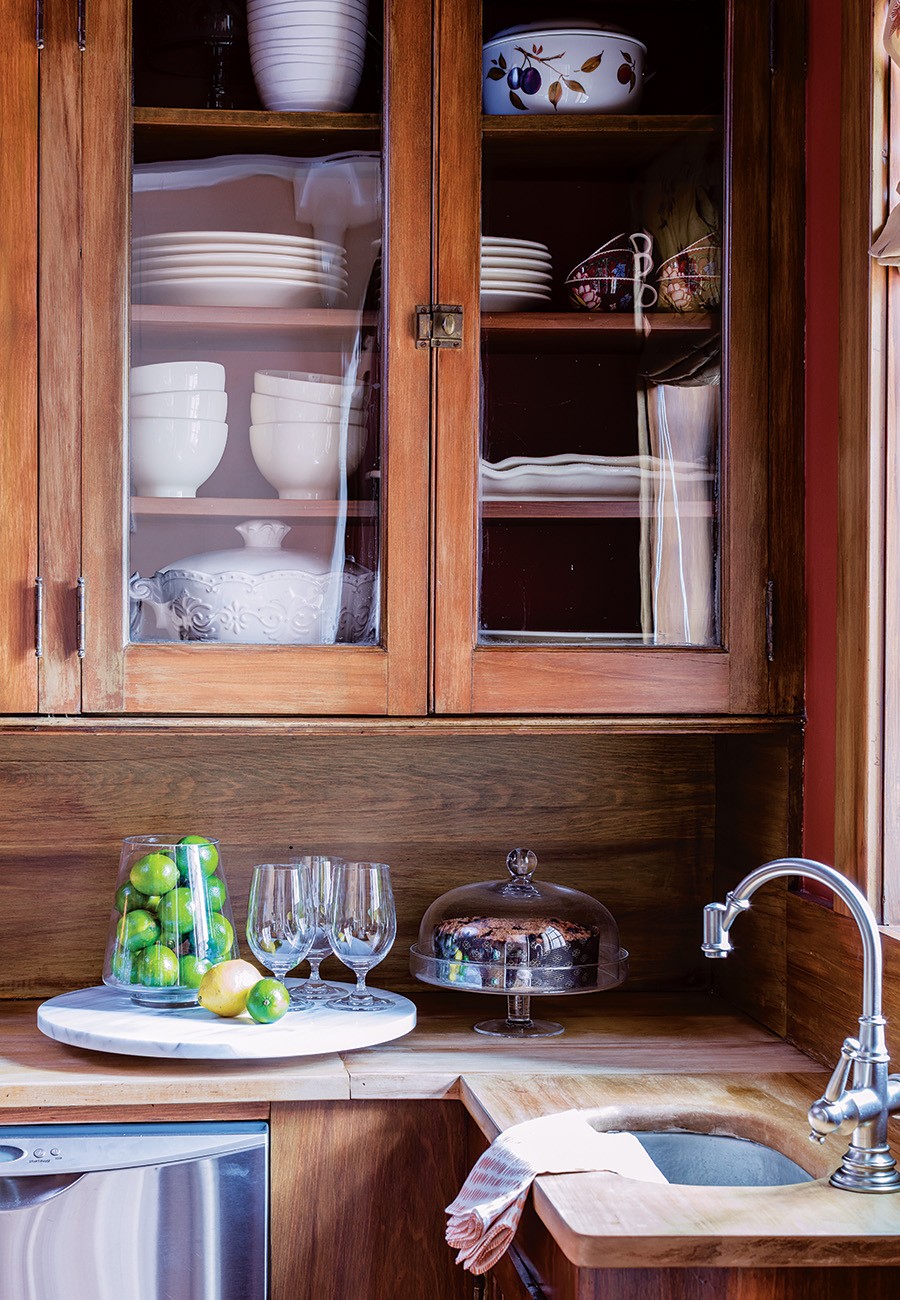 Wood cabinets in the butler’s pantry are reminiscent of the home’s millwork. / Photo by Michael J. Lee 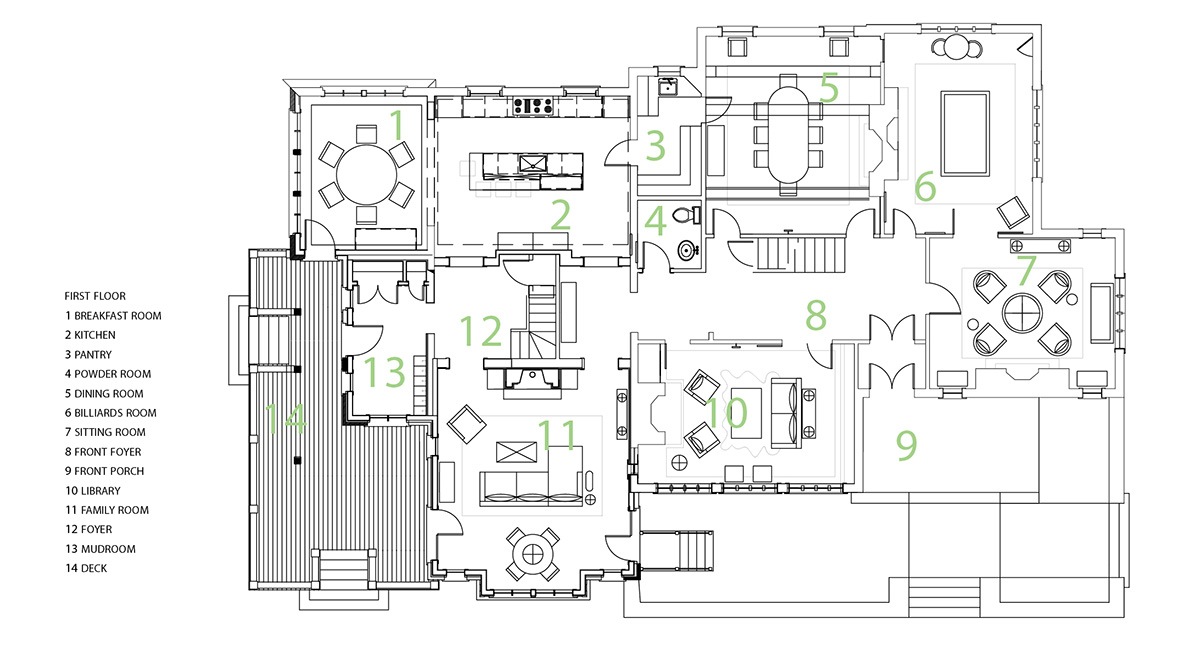