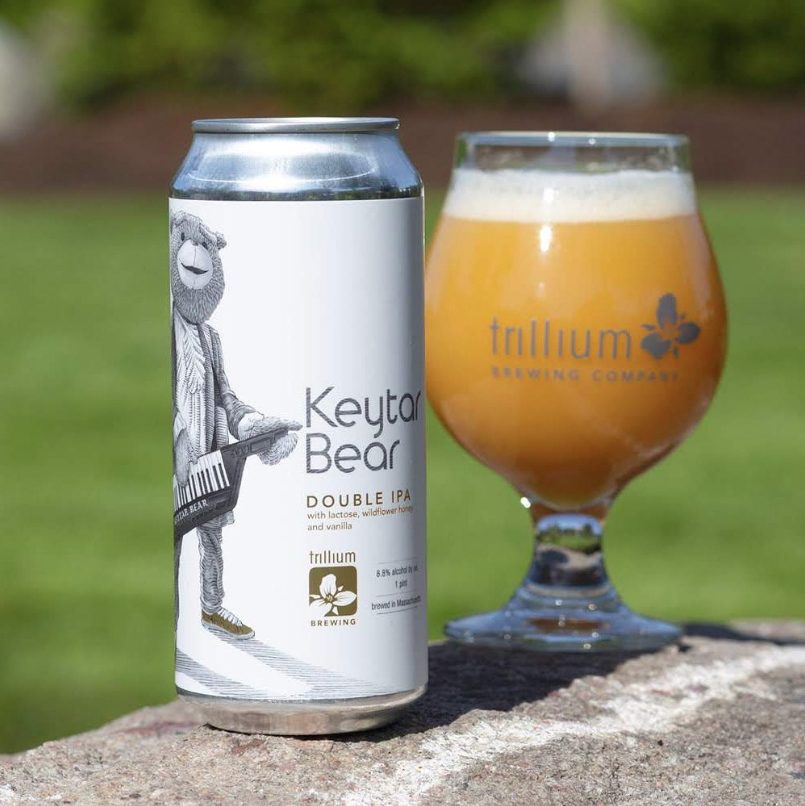 It won’t be a fully Keytar Bear-less summer after all, Boston.

For one thing, esteemed bostonmagazine.com editor Lisa Weidenfeld spotted the bruin jamming in Davis Square last Thursday. Keytar Bear—who suffered injuries from a motorcycle crash earlier this spring—had crutches at the ready, but he was clearly still making onlookers’ days with his tunes.

“Known to many Bostonians for his welcoming perma-smile and funky 80’s Prince covers, a Keytar Bear sighting is a surefire way to brighten the day, or at the very least your commute on the T!” shared Trillium in an emailed newsletter.

It’s not the first time Team Trillium has named a beer for a favorite musician. Sunshower saison is named for a Chris Cornell song, and co-owner JC Tetreault’s collaboration with known music fan Chris Lohring of Notch Brewing is named after a Kaiser Chiefs song.

It’s also not the first Trillium-Keytar Bear collaboration: The busker performed at the temporary Roslindale beer hall earlier this year.

When reached for his thoughts on the beer in his honor, Keytar Bear said he is “glad about the project.”

On Facebook, Trillium told a fan that some of the proceeds of the beer’s sales will go toward Keytar Bear’s recovery fund.

The Keytar Bear DIPA cans feature a portrait of the bear himself donning sneakers and a ruffled shirt, hand-drawn by Trillium label artist Kevin Cimo. They were released at both Trillium breweries this morning at $22.20 per four-pack, and there is a one-case limit.

In other Trillium news, the Canton-based brewery also shares more details about its first-ever festival. Tickets for the August 4 event go on sale today at 1 p.m.—and there are plenty. The Trillium Field Trip, as the family-friendly fest is called, is taking place over two sessions at the Back Fields at 1895 J W Foster Blvd. in Canton, which will host more than 1,000 people each session (11 a.m.-4 p.m., and 5 p.m.-11 p.m.).

“Expect full pours of an insane lineup of beers. Don’t worry about packing your lunch, [as] we’ll have a variety of food trucks to hit every craving,” Trillium says.

Kids are invited, and tickets (including your first pour) range from $10-$25. Additional 5- and 10-ounce beer tickets will be sold on-site. More breweries will be announced, but so far the lineup includes Bellwoods Brewery, Bissell Brothers, Jackie O’s, Lawson’s Finest Liquids, Notch Brewing, Stillwater Artisanal, and the Veil Brewing.

No promises that Keytar Bear DIPA will be on draft at the festival, but if it is, we would be almost as excited as we are when we hear the real Keytar Bear’s dulcet tones in the distance.

In other, other Trillium news, the company has shared a GoFundMe page to support Matt Brown, the self-employed electrical contractor who was injured while working at its Canton facility last week.

Trillium’s breweries are open for can sales today until 7:30 p.m., and its summertime Garden on the Greenway reopens for the week on Wednesday at 2 p.m.