Donate to the These Funds to Directly Support Local Hospitality Workers

From paying for hot meals and household supplies to buying gift cards through a charitable program, here are opportunities to help from home. 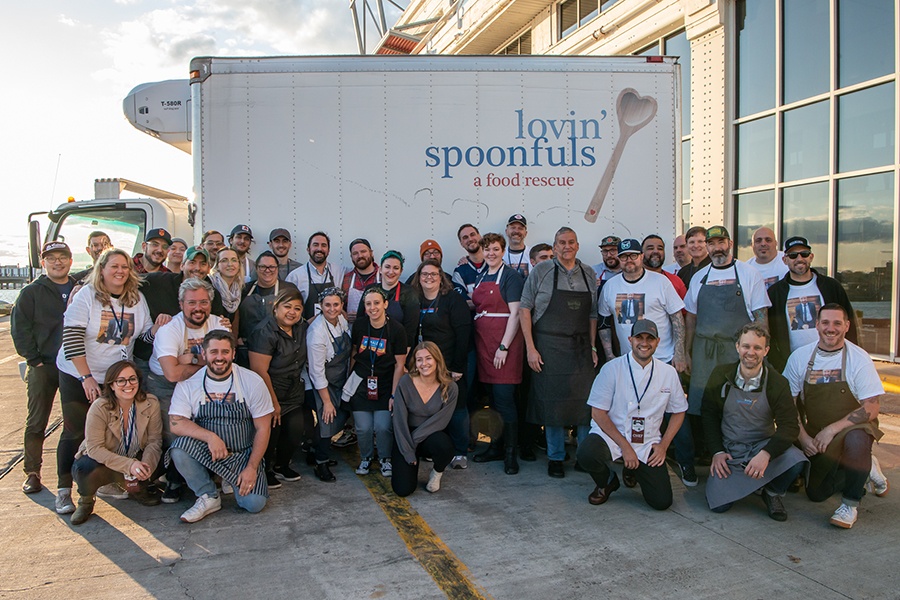 Boston’s chefs and hospitality industry employees step up throughout the year to support the Lovin’ Spoonfuls organization, like this group ready to cook for Lovin’s annual Ultimate Tailgate event. Now, the Lovin’ Spoonfuls founder is using her network to help restaurant industry workers through the unprecedented crisis caused by the COVID-19 pandemic. / Photo courtesy of Lovin’ Spoonfuls

In his March 31 update on the coronavirus pandemic, Gov. Charlie Baker laid out stark statistics about the rising number of COVID-19 cases in Massachusetts—and also extended the statewide shutdown of nonessential businesses until May 4. It’s hard to fathom how this will impact restaurants in the long-term, without knowing exactly what to expect yet in terms of federal, state, and local support. But the immediate impact is apparent: The Mass. Department of Unemployment Assistance is processing an “unprecedented” number of unemployment applications, which certainly includes many of the Bay State’s 350,000 hospitality workers. It doesn’t include undocumented employees, though there are certainly those folks out there, too.

If that daunting list of statistics makes you want to help, read on. We’ve gathered a list of grassroots and industry-rooted fundraising efforts that are attempting to fill in some gaps for wage-earning and tipped hospitality workers right now. Many restaurants and bars have set up their own fundraising accounts, as well, but the following list focuses on funds that support the industry more broadly. We’ll do our best to let you know about other ways you can help our beloved restaurant industry come out on the other side of this unprecedented situation.

Behind You Emergency Fund

This North Shore-based memorial fund has grown since its initial launch in 1999, in memory of Elizabeth Bookholz, and now supports individuals temporarily out of work for medical reasons, who live or work in Beverly, Lynn, Marblehead, Peabody, Salem, and/or Swampscott. On March 16, it launched a special emergency fund and matched contributions up to $20,000—in 10 days, donations reached $70,000. North Shore folks, stay tuned for applications to reopen if you’re still in need.

Set up by Gabby Bonfiglio and Emily Beaulieu, two women who have been laid off from a local brewery, this GoFundMe account has already raised and distributed $17,000 among 160 industry workers. They hope to raise $25,000 more to distribute to 335 other people in mid-April, per the page’s latest update. “The 300+ workers who have requested access to our funds raised are fellow Boston area service industry workers: friends, friends of friends, and the staff of our favorite cafes, bars and restaurants,” the organizers report. “Your local bartenders, the hardworking kitchen staff, the barista who makes your morning cup, your waitresses/waiters serving you your favorite meals, the hostesses/hosts taking all of your reservations, and the barbacks who take care to keep our community spaces clean and thriving.” 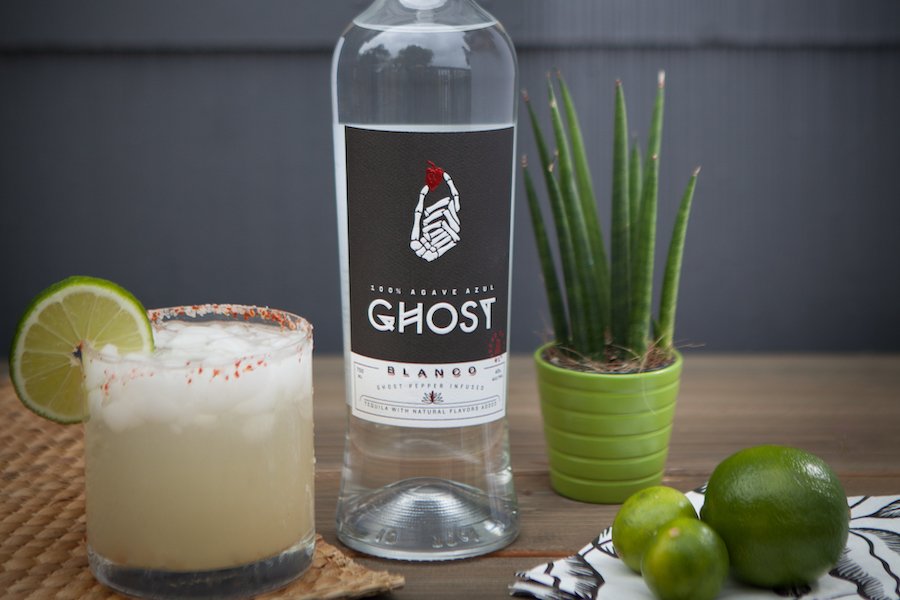 Boston-based brand Ghost Tequila has launched an interactive competition that raises money for the bar industry on the whole—but also gives out-of-work bartenders across the country a fun opportunity to compete for prizes and cash. Ghost invited more than 100 bartenders nationwide, and 30 from the Boston area, to create a spicy tequila cocktail, and share a video of themselves preparing it. The mixologists will earn swag prizes and cash during each round of the tournament, totaling more than $2,000 for the ultimate winner. Check out the entires online, and vote for your favorites—for every vote cast, Ghost will contribute $1 to the Restaurant Workers’ Community Foundation COVID-19 Emergency Relief Fund. The company also set up an​ ​GoFundMe​ page for the organization, and will match contributions up to $10,000.

Bartender Naomi Levy has been a prominent force on the Boston bar scene since her days at Eastern Standard. Now, she oversees Variety Bar at the Comedy Studio, located at Somerville’s eclectic Bow Market. Suffice to say, she’s close with many workers throughout the hospitality industry—so, her GoFundMe effort supports not only her own staff, but any Camberville hospitality workers in need right now. Levy reports that donations since March 16 have already started going out to eligible “cooks, servers, baristas, bartenders, and backwaiters,” but “we are receiving 15-20 new applicants a day.” If you work in hospitality and live or work in Cambridge or Somerville and need help, apply for this fund—and if you’re just missing the bars on that side of the river, make a donation. To sweeten the support, Levy is keeping busy sharing at-home bartending recipes on her own social media, too. Cheers!

The restaurant ownership team of chef Jody Adams, Eric Papachristos, Sean Griffing, and Jonathan Mendez have answered the call of celebrity chef José Andrés’s World Central Kitchen to help make meals to support local healthcare workers, as well as their own out-of-work employees. All donations made to Trade, Porto, and Saloniki’s GoFundMe page will be used to purchase food and materials, and pay any non-volunteer workers, to make up to 500 meals per day. 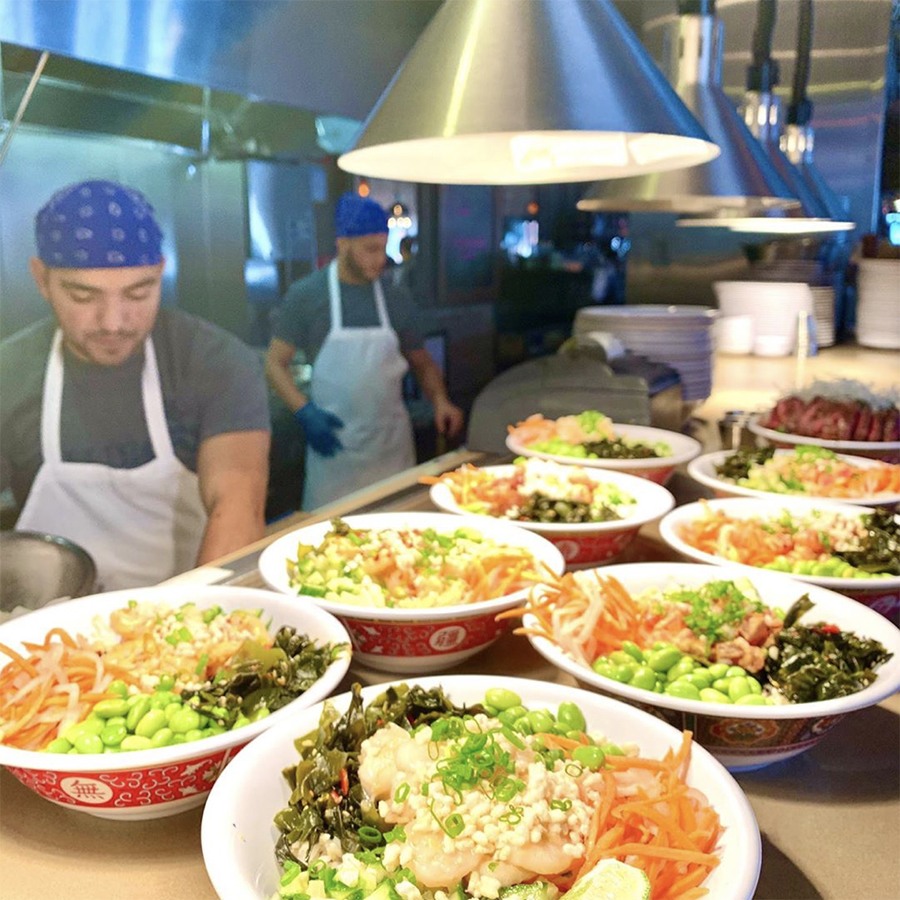 The team at Blue Dragon, shown here working before the current health crisis shut down normal operations, is cooking nightly for out-of-work hospitality employees, and you can support their effort. / Photo courtesy of Blue Dragon

Celebrity chef Edward Lee’s philanthropic organization aims to come up with fast and forward-thinking solutions to address problems in the hospitality industry—and lately, that’s been to take care of industry family with free, nightly meals. The Restaurant Workers Relief Program is now active in 14 cities—including Boston. Chef Ming Tsai’s Blue Dragon is the local site, serving dinners to unemployed restaurant workers nightly from 3-5 p.m. The Fort Point restaurant also serves as a hub where guests can pick up much-needed household supplies. Support these efforts with a monetary donation, or a purchase through Blue Dragon’s Restaurant Workers Relief Program Amazon wishlist.

In support of worker relief efforts by the National Restaurant Association Educational Foundation, former Patriot and three-time Super Bowl Champion Matt Light started this fun social media campaign, which encourages fans to donate their would-be bar tabs to out-of-work foodservice employees, and instead share a toast from the comfort of home. Along with making an online donation, the #LiftYourSpirits movement asks people to post a video of themselves, with their favorite beverage, raising a toast in support of restaurant workers across the country. Here—allow Catherine and Jason Varitek to demonstrate. This is a philanthropic effort of the National Restaurant Association, the largest restaurant and foodservice trade association in the world, which represents and advocates for more than 500,000 businesses and millions of employees throughout the country. It expects to be able to offer “thousands” of one-time, $500 grants thanks to this campaign. Grant applications open on April 2.

Help support two South Boston kitchen crews—Loco Taqueria & Oyster Bar, and Fat Baby Sushi & Cocktails—and possibly give yourself something really cool to look forward to: Playing golf with a team of current and former National Hockey League players. Ryan Whitney, Keith Yandle, Chris Wagner, Kevin Jayes, Jimmy Hayes, and Mark Fayne are donating their time and golf skills to spend a day on the course with eight lucky local golfers. Here’s how it works: Bid via Instagram direct-message @locosouthbos, or by emailing restaurateur Mike Shaw. Four winning teams of two will be chosen at 5 p.m. on Thursday, April 2. Stay tuned for an exact date for the Beers & Birdies grand prize, but it will include a round of 18 holes; Ryan Whitney’s New Amsterdam vodka, Pink Whitney; plus beers on the course, and dinner afterwards. All the money raised during the online auction will be allocated to help the kitchen teams at both of Shaw’s restaurants.

Massachusetts is home to an estimated 250,000 undocumented immigrants. Until the pandemic shutdown, many of them made their livelihoods in the hospitality industry, and other hard-hit sectors like child and elder care, day labor, and agriculture. This population is among our many neighbors who are suddenly out of work—but undocumented immigrants do not qualify for federal assistance, such as unemployment benefits. Beyond that, undocumented Americans face other barriers to receiving aid, due to a lack of immigration status, sometimes limited English proficiency, and fear of immigration enforcement. This relief fund assists applicants on a weekly, rolling basis, based on funds available. It’s set up by a group of grassroots economic justice organizations that already have ties with this vulnerable community, including Massachusetts Jobs with Justice, MataHari Women’s Worker Centers, and One Fair Wage. MassDocufund can also connect applicants with further resources, like other emergency relief efforts, housing, immigration, workers rights, health care, and legal issues.

A Harvard Medical student started this grassroots organization to employ currently out-of-work hospitality employees to make meals to donate to front-line hospital workers. Founder Natalie Guo teamed up with Pagu chef Tracy Chang, Little Donkey’s Ken Oringer and Jamie Bissonnette, and Irene Li of Mei Mei to Boston at the beginning of the COVID-19 crisis, and in just two weeks has expanded to New York City, Los Angeles, San Francisco, and Pittsburgh. So far, it’s raised more than $200,000, which has provided nearly 22,000 “hero meals,” nearly $110,000 in wages, and supported almost 7,000 hours of work. Off Their Plate has incorporated as a 501(c)(3) organization, and partnered with CommonWealth Kitchen and World Central Kitchen to fiscally sponsor and raise awareness for the initiative, Boston.com reports.

Some of the biggest names in the Boston dining scene have joined the Greg Hill Foundation’s effort to provide $1,000 grants to full-time restaurant workers in Massachusetts. Samuel Adams Brewery launched the Restaurant Strong Fund on March 16 with a cool $100,000 donation, and a promise to match other contributions up to $100,000 by March 31—as of press time, the fund is close to $500,000 and growing. Besides Sam Adams, chefs Ming Tsai (Blue Dragon), Ken Oringer (Little Donkey), and Chris Coombs (Boston Chops) have lent their platforms to help raise awareness as official chef advisors. Gordon’s Fine Wine & Liquors offers a weekly wine deal to support the Restaurant Strong Fund, and many other locals have stepped up too. You can join them with a donation in any amount. If you are an out-of-work restaurant worker, here’s how to apply for a $1,000 grant.

Relief for Our Friends in Hospitality

In response to the COVID-19 crisis, Lovin’ Spoonfuls has upped its efforts to redistribute good food that would otherwise be thrown away, among more than 160 organizations throughout Greater Boston, MetroWest and Hampden County. All year long, the local food rescue organization depends on Boston’s hospitality industry to participate in events that support its mission, like Lovin’ Spoonfuls’ annual Ultimate Tailgate—and now, the founder of Lovin’ Spoonfuls is giving back to those folks in their time of need. Ashley Stanley, along with her wife, Kelly Dennehy, launched a GoFundMe, and plan to evenly distribute all donations among the Lovin’ Spoonfuls network of restaurants.

The Boston-based hospitality software company Toast has been keeping busy providing the technology that restaurants here and around the country are using to enable online ordering and delivery. But that’s not all: Toast is also compiling daily statistics about how the current crisis is affecting the restaurant industry; it is publishing blog posts relevant to issues in the industry; and it’s gathering other resources for clients (and beyond). Plus—and here’s where your wallet comes in—Toast has launched a #RallyforRestaurants gift card-buying campaign, with a public directory—featuring Toast clients as well as unaffiliated restaurants—to buy restaurant gift cards online. Share your contribution on social using #RallyforRestaurants and tag the restaurant, and Toast’s philanthropic branch, Toast.org will donate $1 per post (up to $250,000) to World Central Kitchen and the Restaurant Workers’ Community Foundation.