Don't sleep on these places to eat well after midnight.

Sure, with our early last calls and even earlier subway-service shutdowns, Boston will never be confused for the City That Never Sleeps. But for those in need of midnight snacks or second dinner to go along with late-night revelry, there are plenty of spots that stay open serving food until midnight and later—not just in Allston and the Fenway, but in Cambridge and Brookline, too. Ahead, a 24-hour-accessible guide to the 21 best late-night menus around Boston. 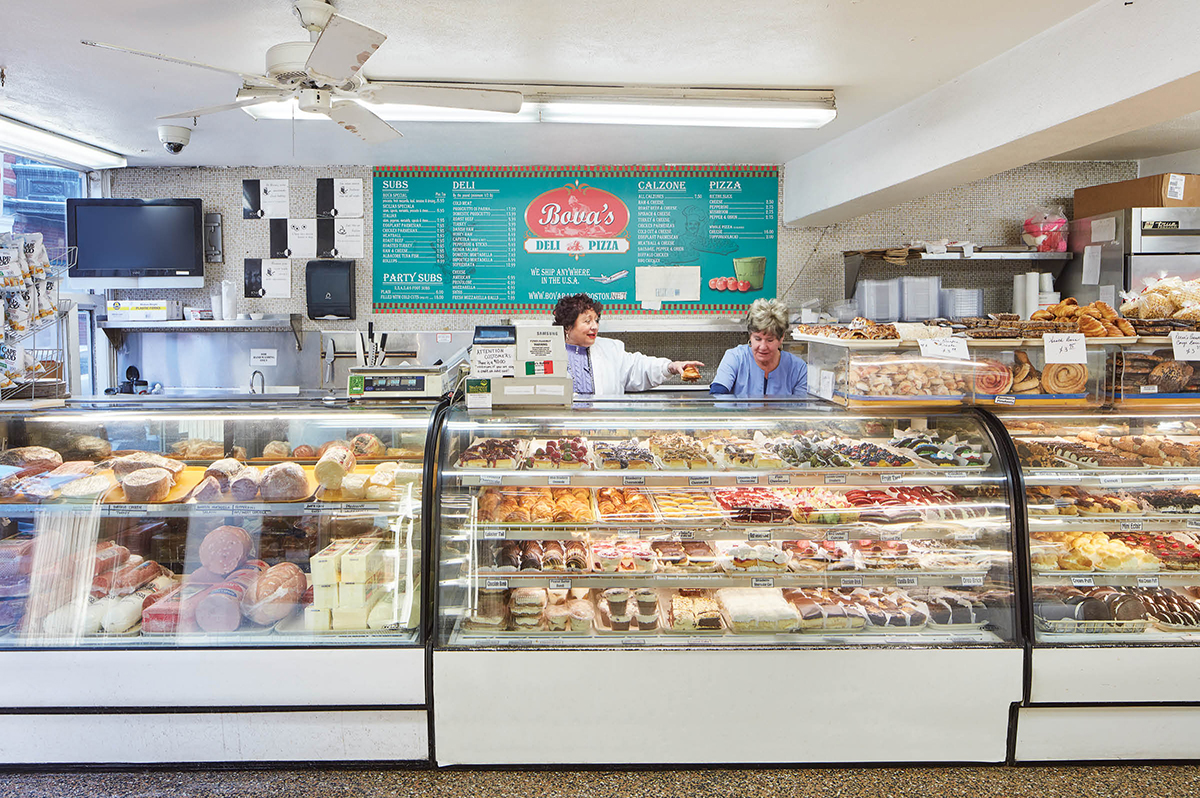 Bova’s Bakery cases are stocked at all hours. / Photo by Jared Kuzia for The Best North End Restaurants

Freshly made cannoli are always delicious, but for some reason, they taste even better at 4 a.m. Unlike other North End bakeries (and most Boston businesses), Bova’s stays open 24 hours a day with cases full of rainbow marzipan cookies, red velvet whoopie pies, and savory options like Buffalo chicken calzones and Sicilian slices. Best of all, you can still snag most pastries for under $4. 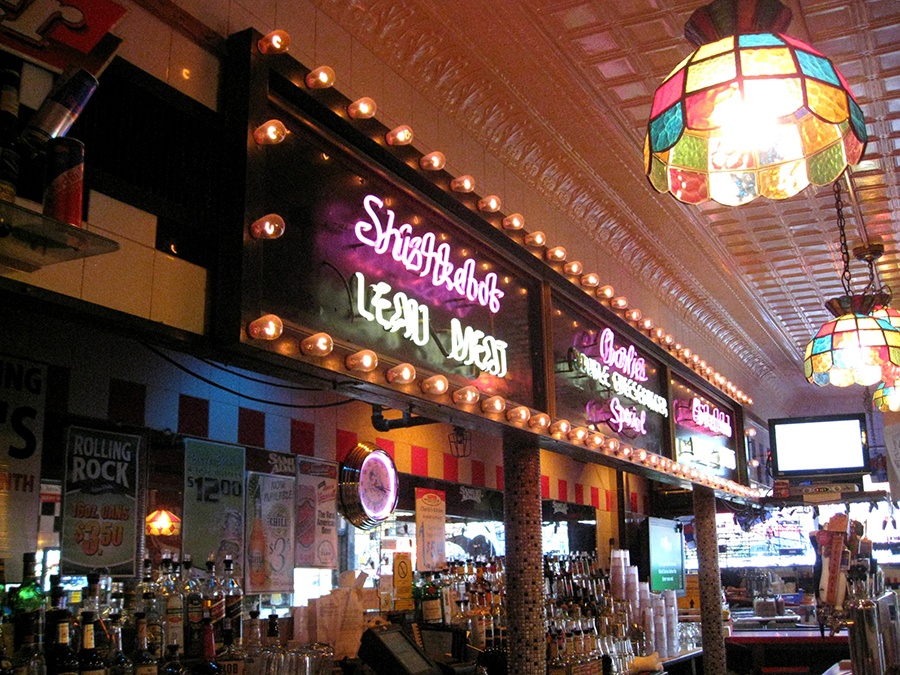 The downstairs bar at Charlie’s Kitchen. / Photo by Jenni Konrad on Flickr/Creative Commons

The late-night kitchen at this divey diner and beer garden serves up world-famous double cheeseburgers, waffle fries, grilled cheeses and more every night until at least 12:45 a.m. Cue up a classic on the jukebox and grab a red vinyl barstool or booth, or head upstairs to the lively lounge where there might be live music or a DJ. This is where to end your night in Harvard Square.

Cambridge’s only 24-hour restaurant fully commits to after-dinner hours with full late-night (served until midnight), later night (served until 4:59 a.m.), and breakfast menus. There are house-made sodas, coffee, teas, and $5 local beers, plus everything is vegetarian-friendly, from the New England-grown chickpea falafel to hangover-curing breakfast bowls. But the real draw? Two vintage pinball machines. Play on! 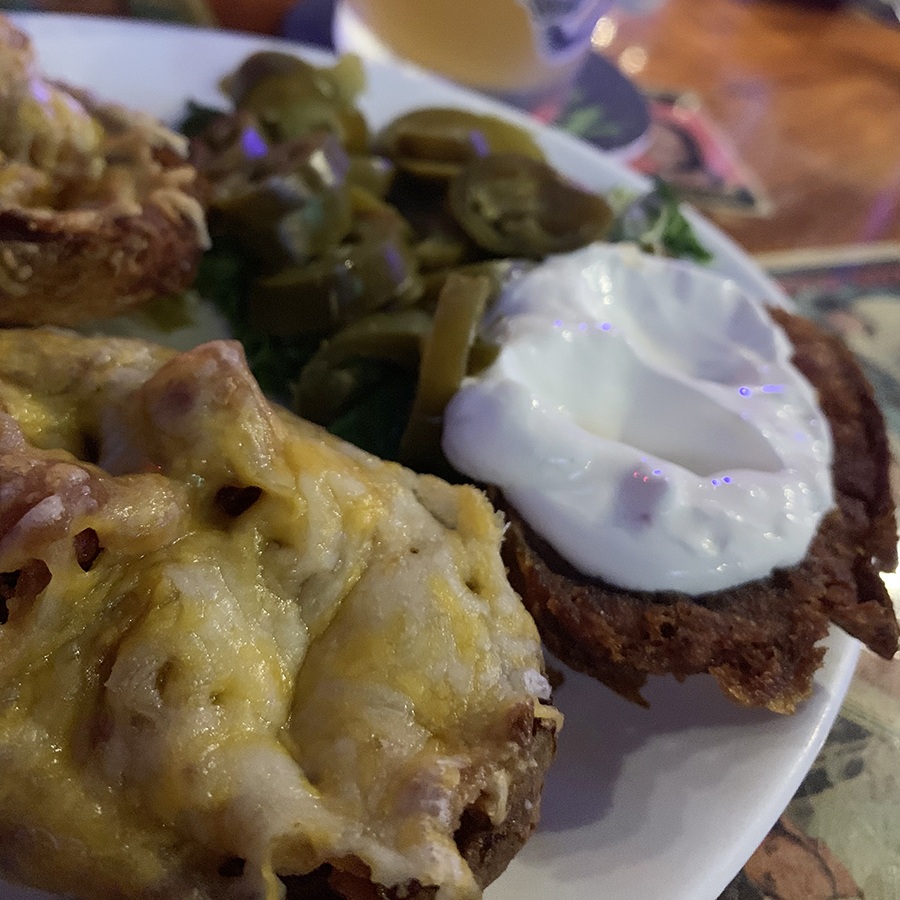 With 24 high-def TVs hung around the cozy space, the Clubhouse is the best spot to settle in for one of those classic Red Sox-Yankees pitchers’ duels that goes into extra innings. The huge menu of pub grub—like nachos, potato skins, “left wingers,” salads, and sandwiches named after Boston sports greats—is available nightly until 1:15 a.m. 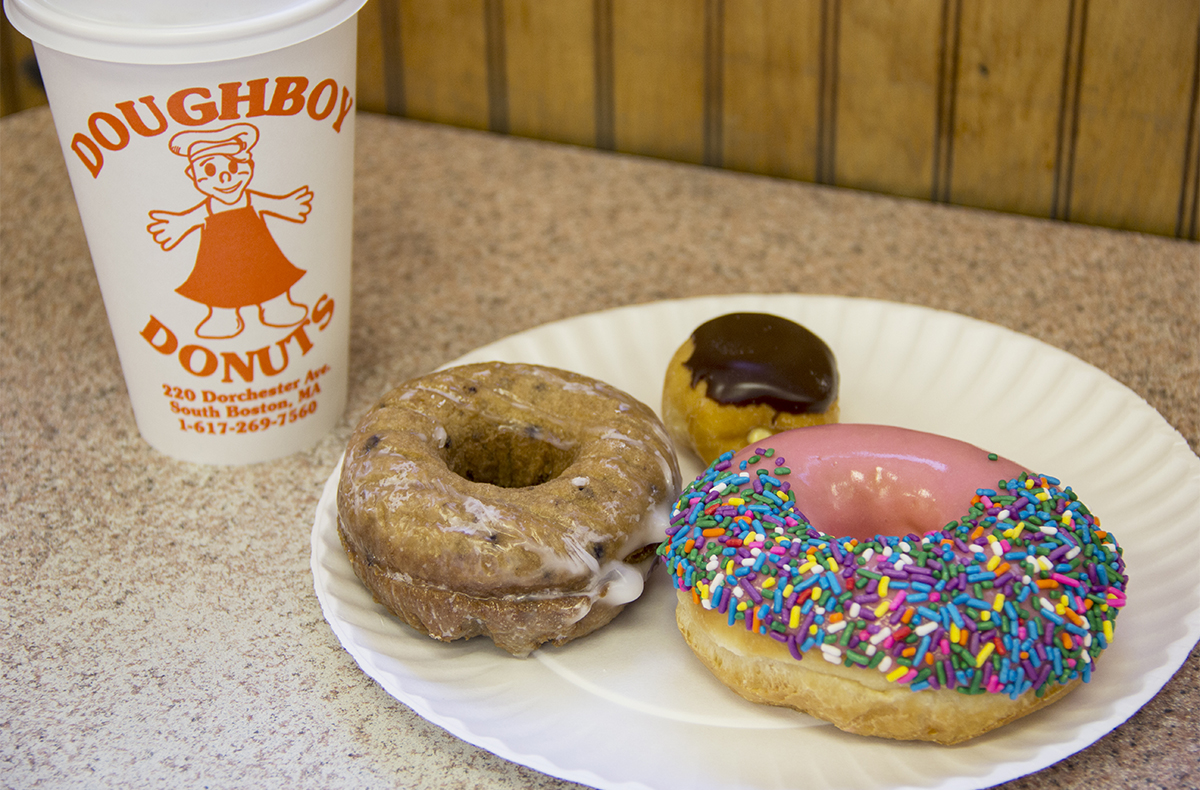 Don’t let the rather drab façade of this old-school Southie joint fool you—inside awaits a glorious rainbow of frosted carbs, served up 24/7. Rocking everything from tie-dye purple-and-blue icing to crunchy Fruity Pebble cereal, classic Boston cream and jelly-filled doughnuts are here, too. Doughboy keeps the coffee brewing at all hours, and has iced flavors like vanilla and peanut butter. In a city where Dunkin’ occupies nearly every corner, this classic coffee shop holds its own. 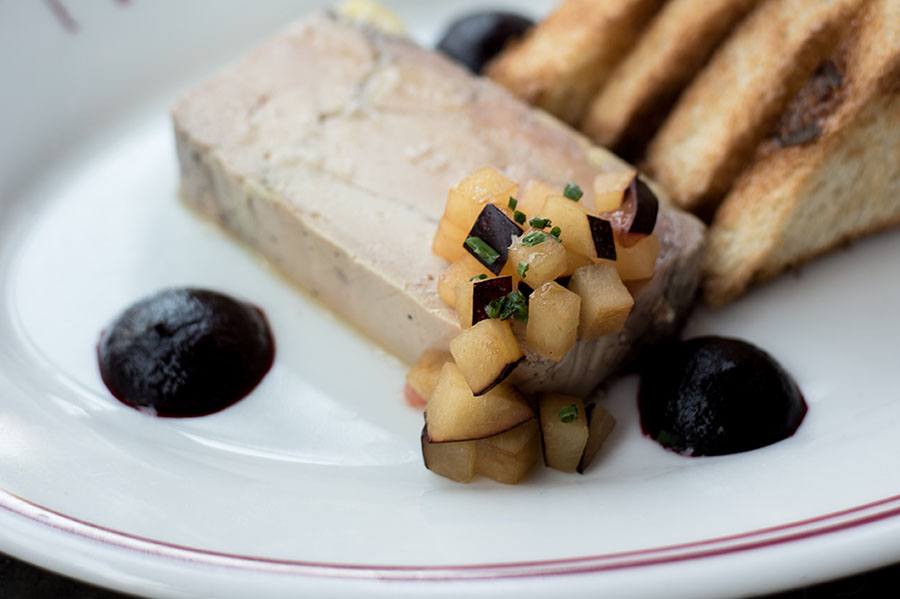 It’s not hard to see why this Kenmore Square brasserie is an indispensable industry hangout and a multi-year Best of Boston winner. On top of the lively ambience and top-notch craft cocktails, quality comfort food is served nightly until 1:30 a.m., from warm, soft pretzels to a full-on ribeye. If you time your visit just right, you might catch the staff standing up on the bar, hand-writing the late-night specials on the vintage mirror. 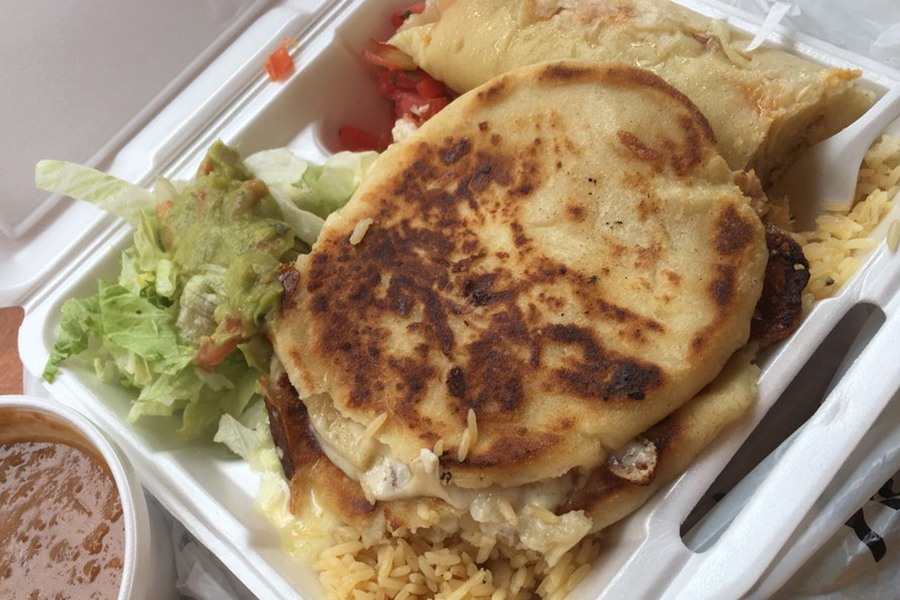 Papusas and more Mexican fare is served up some nights until 4:30 a.m. at El Trifuno. / Photo by Nicci M./Yelp

SoWa denizens have heartily embraced this south-of-Washington Mexican grill, which stays open as late as 4:30 a.m. some nights. Detect a distinctly Middle Eastern accent amid the burritos, pupusas, and enchiladas? Indeed, it’s a sister venture of next-door Turkish restaurant Ali Baba—which means you can end an evening of pints at Foley’s with a restorative meal that includes both steak fajitas and baklava.

To pair with Lowcountry libations like a fennel-scented spritzer and ice-cold “fridge beers,” late-night specials here include pimento grilled cheese, a black eyed pea burger, and a pound o’ steamed mussels. Serving food nightly until 1:30 a.m., this is a popular spot for all of Jamaica Plain when other Centre Street spots close for the night. 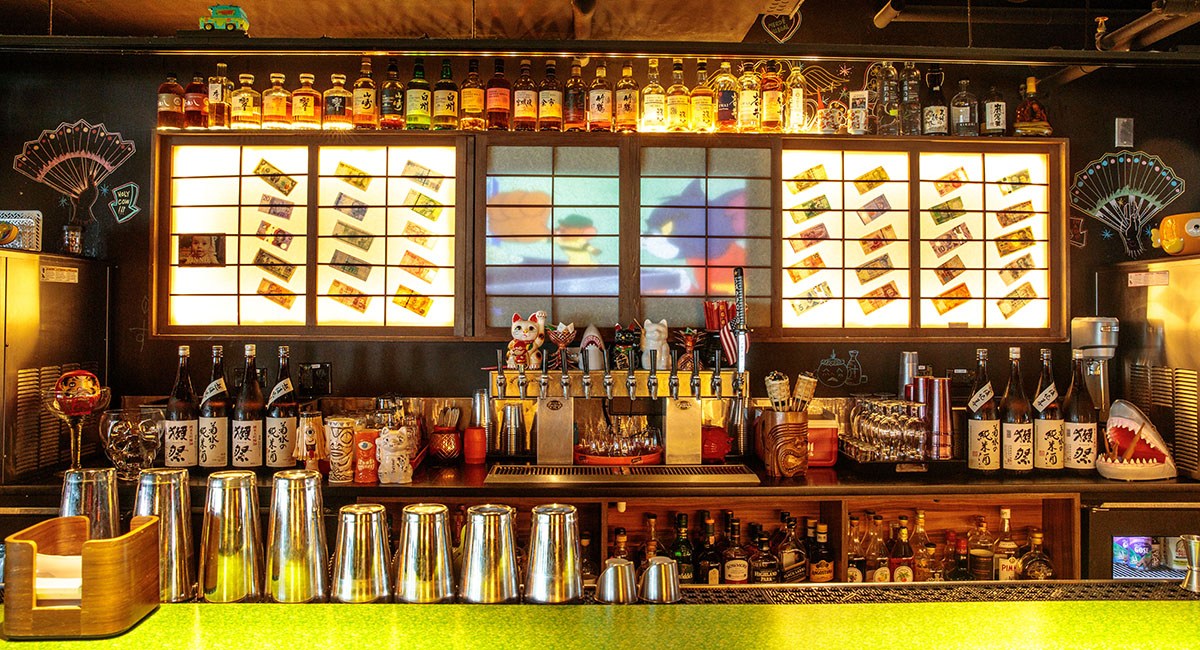 The bar at Hojoko. / Photo by Brian Samuels Photography

Boston’s unofficial afterparty headquarters, Tim and Nancy Cushman’s rock-and-roll izakaya serves up munchies and mayhem until 2 a.m. every night. Their flair for high-low comfort food manifests in snacks like the formidable Doggzilla, a fully loaded, cheese-and-jalapeño-laden smoky hot dog. Rolling with an entourage? Hojoko’s large-format “For The Band” cocktails keep the evening going. 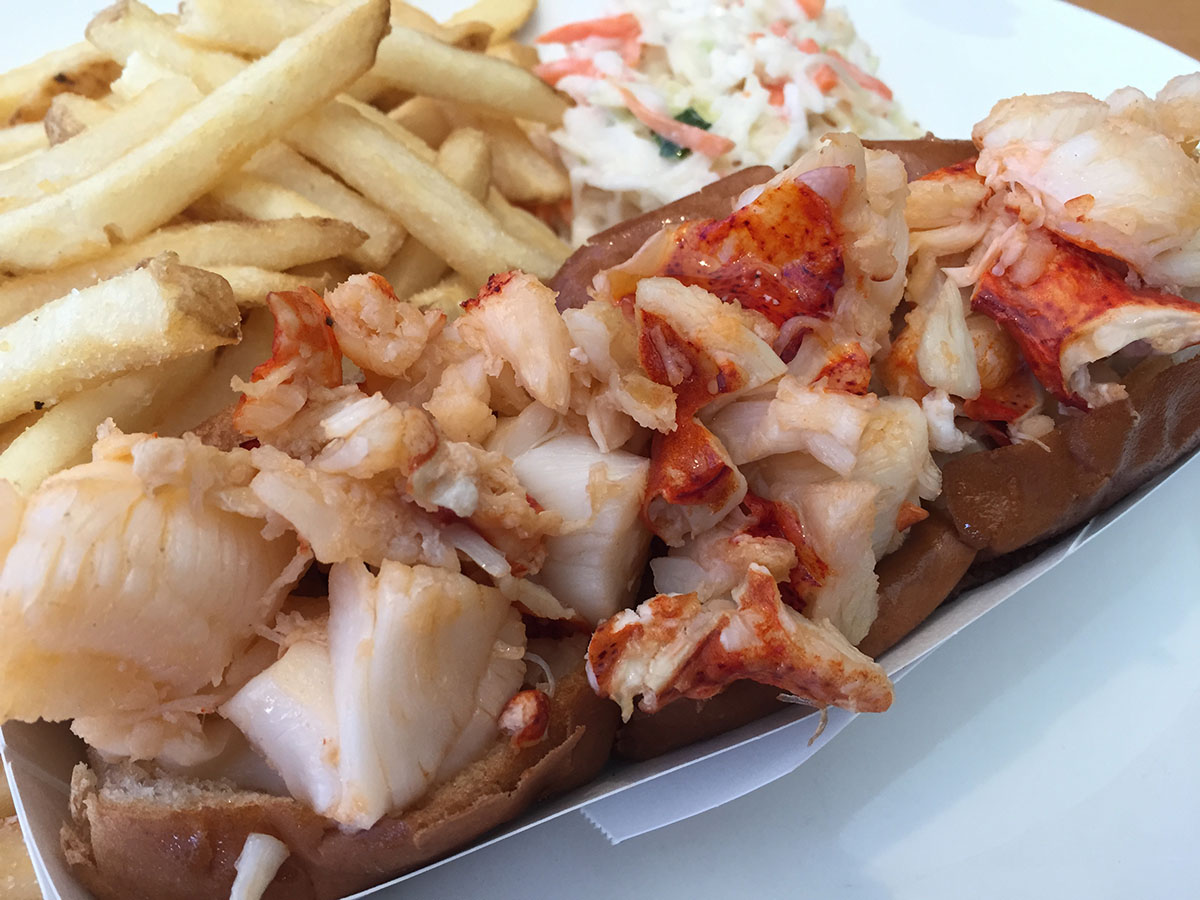 This sleek downtown spot adds extra metropolitan polish to Legal Sea Foods—starting with a late-night menu, always available until an hour before close. Post-theater crowds can opt for such classics as New England clam chowder and butter-poached lobster rolls; as well as Asian-inspired dishes like seared tuna sashimi and spicy bang bang cauliflower. Lest you need an excuse to linger, keep that nocturnal buzz going with a round of “adult profiteroles,” made with Eagle Rare bourbon ice cream. 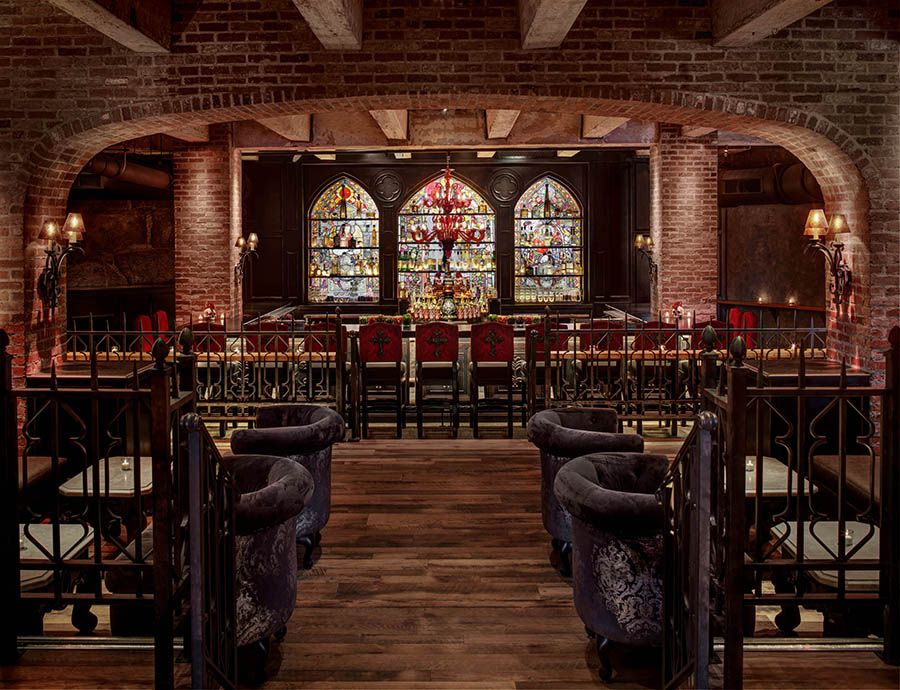 Brought to you by the same team behind Yvonne’s and Ruka, Lolita’s penchant for drama shines through in the gothic décor and the impressive lineup of margaritas, mojitos, and sangrias. Chef Juan Pedrosa’s menu of sirloin tacos, grilled street corn, and green chile chicken nachos is on at both locations until midnight, and the night always ends with a “wow” when the check arrives with a complimentary cotton candy cloud speckled with Pop Rocks. 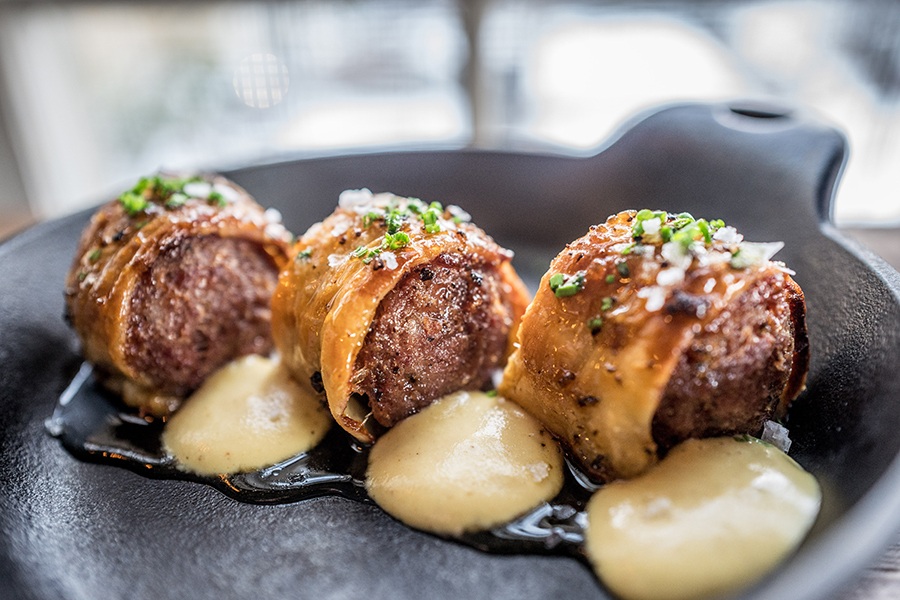 Pigs in a blanket at Longfellow Bar. / Photo by Michael Scelfo

This 2019 newcomer has taken up the late-night mantle from big-sister Alden & Harlow, chef Michael Scelfo’s first Cambridge restaurant which had been a midnight munchies mainstay since late 2014. Longfellow is a beautiful, two-level bar (and roof deck) with an exciting array of cocktails, including low-proof libations to choose from as the night winds down. The full menu of finger foods like cotechino sausage pigs-in-a-blanket, farm vegetables with green goddess and warm flatbread, and the Longfellow burger is available daily until last call. 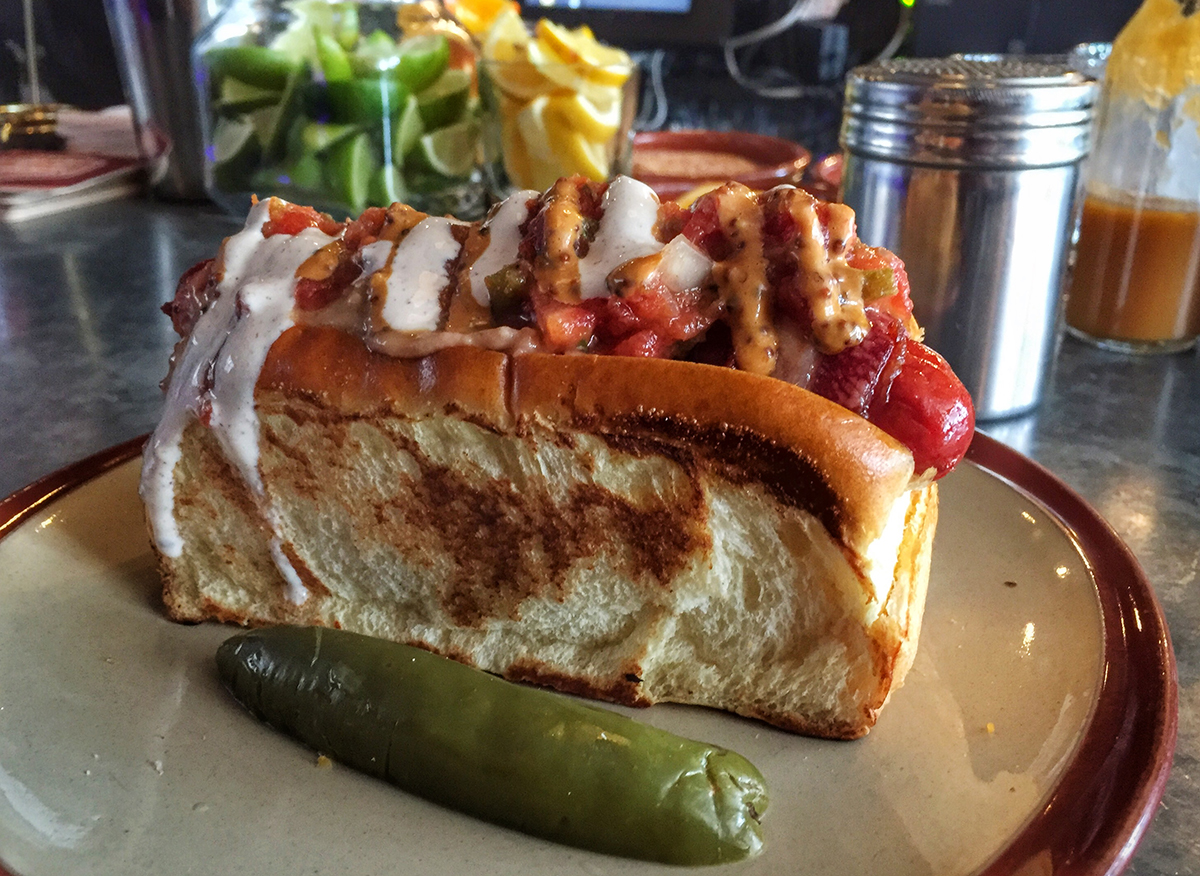 Bacon-wrapped and smothered in refried beans, crema, and chipotle mustard, Lone Star’s over-the-top Sonoran dog tastes best around midnight—wonder why that is? In fact, the Mexican spot’s full menu of satisfying snacks—including house-made chorizo tacos, piquant chili con queso, and crispy tostadas—is available until 1:30 a.m. every night at both the Allston and Cambridge locations. Pair them with a hydrating Topo Chico mineral water, and you’ll thank yourself in the morning. 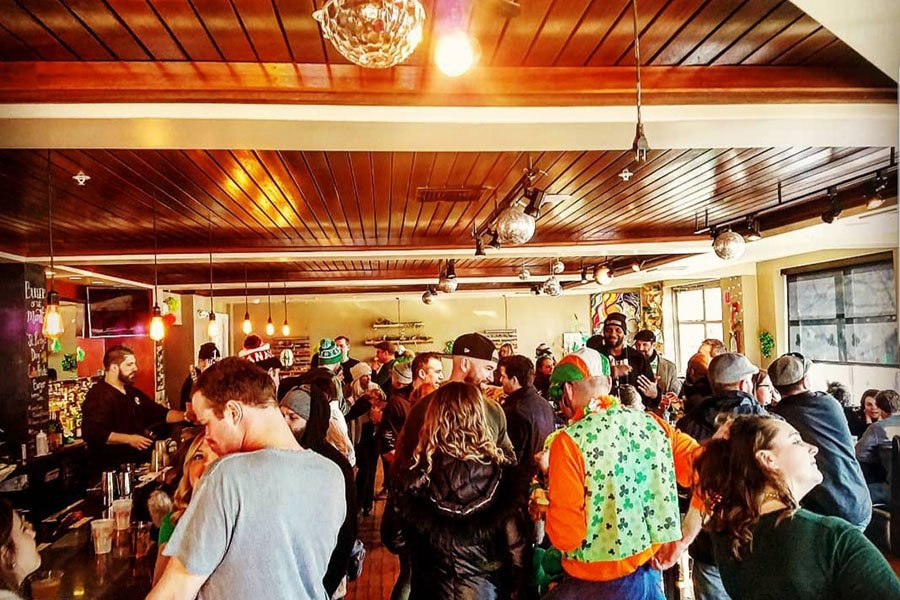 A lively night at Moonshine 152 / Photo by Asia Mei 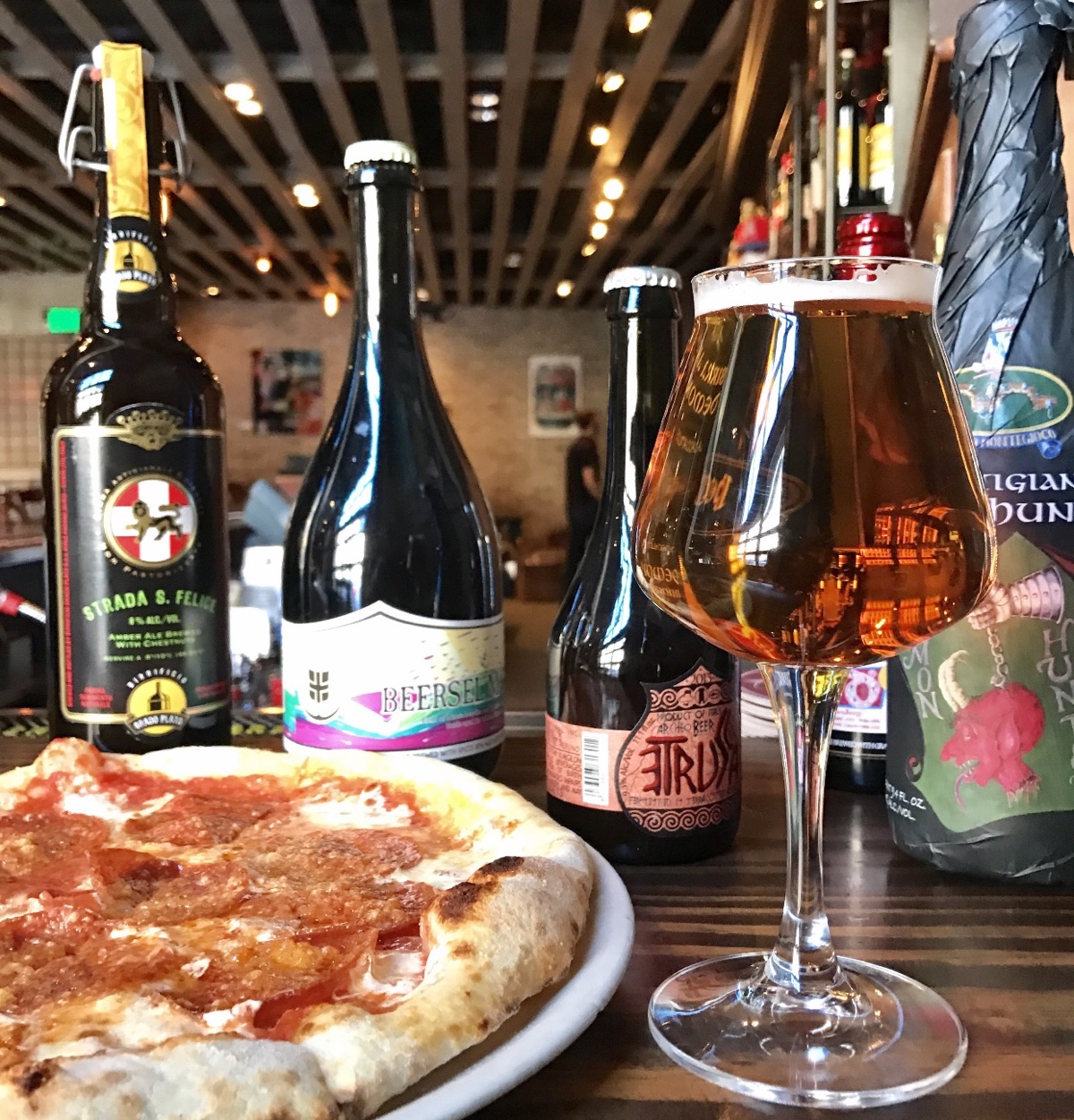 Italian craft beers and pizza are on the late-night at Pastoral. / Photo courtesy of Pastoral

For anyone winding through the streets of Fort Point in search of sustenance (or one last round), the warm glow of Pastoral’s dining room is a welcome sight. At this neighborhood favorite, a massive wood-fired oven burns the midnight—err, wood to turn out perfectly blistered pizzas until 1:30 a.m. Be sure to check out what’s on tap—their deftly curated beer list can include rare draft pours from next-door Trillium, and far-flung Italian imports. 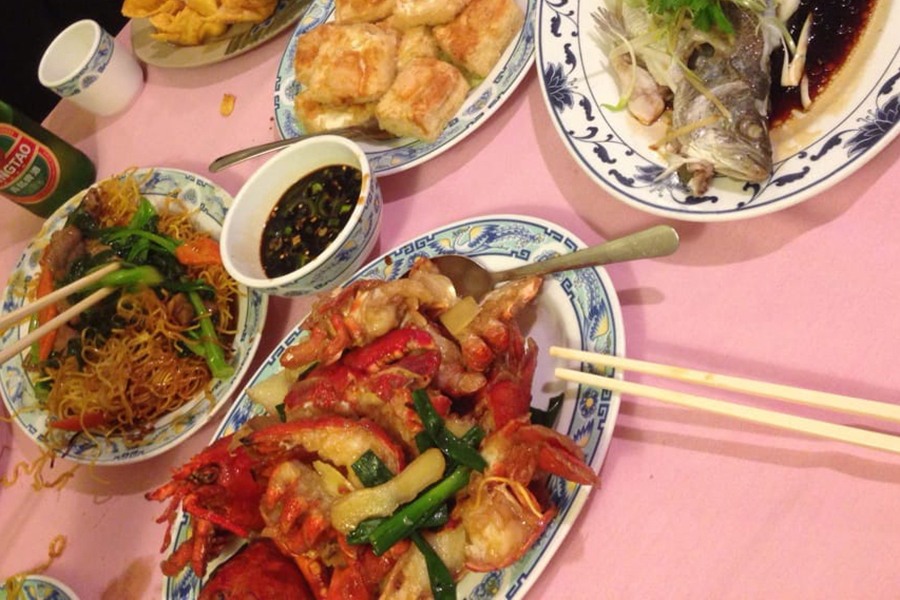 Fresh lobster stir-fried with ginger and scallions at Peach Farm. / Photo by Jakarta N. on Yelp

One surefire way to find a great late-night meal is to figure out where chefs go when their shifts end. Take a cue from Boston’s culinary crowd and make a beeline for Chinatown, where post-midnight dining options abound—with Peach Farm at the top of the list. This ever-bustling neighborhood stalwart is celebrated not only for its massive menu featuring hundreds of authentic dishes, but also for its 3 a.m. closing time. 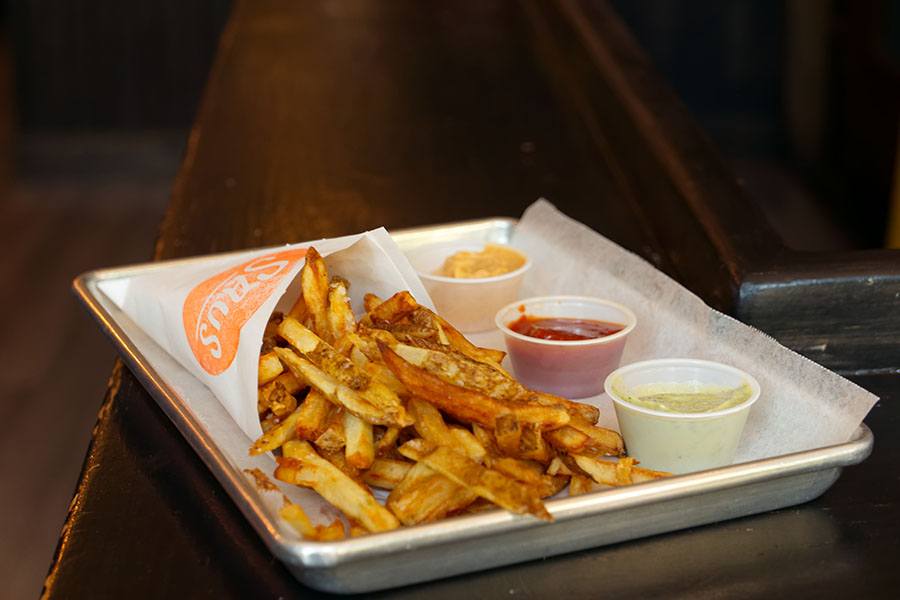 Your Faneuil Hall crawl doesn’t have to end with karaoke and scorpion bowls at the Hong Kong. Ravenous weekend revelers can join the scene at Saus, which is there with superlative fries and more until last call at 2 a.m. The condiment-driven menu elevates the humble frite, and no order would be complete without a side of one (or two) of the 15 signature house-made dipping sauces: Whether you slather those spuds in truffle ketchup, cheddar-ale cheese dip, or spicy sambal mayo, you’ll thank yourself in the morning. 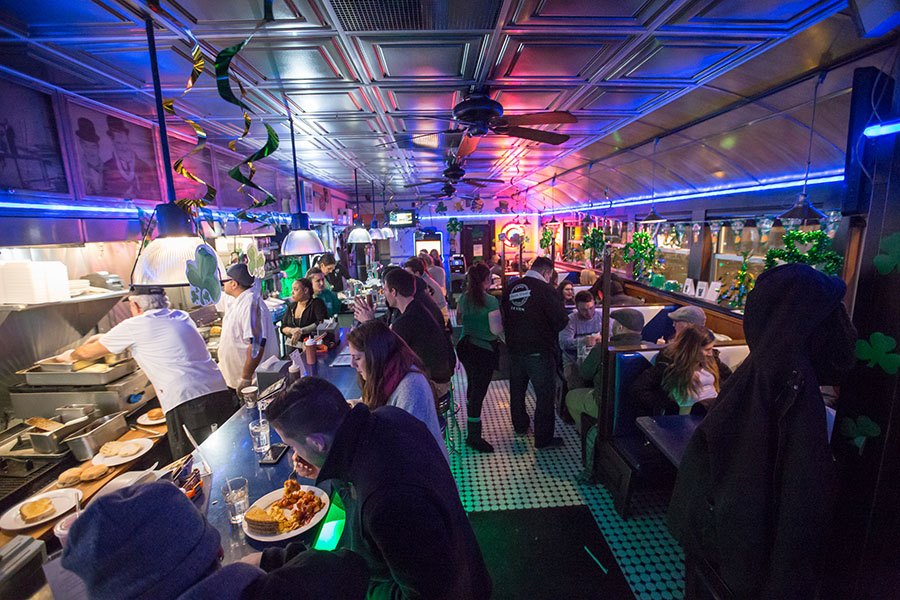 What do rock bands, late-shifters, night-owl office workers, and tipsy college students all have in common? They all go to South Street Diner, where the short-order cooks are firing orders 24/7. Inside the neon-swathed confines of this midcentury holdover—originally built in 1947 to serve the hungry workers pouring out of nearby factories—patrons slurp down towering milkshakes, burgers, and platters of griddled French toast morning, noon, and midnight. It even takes late-night reservations. 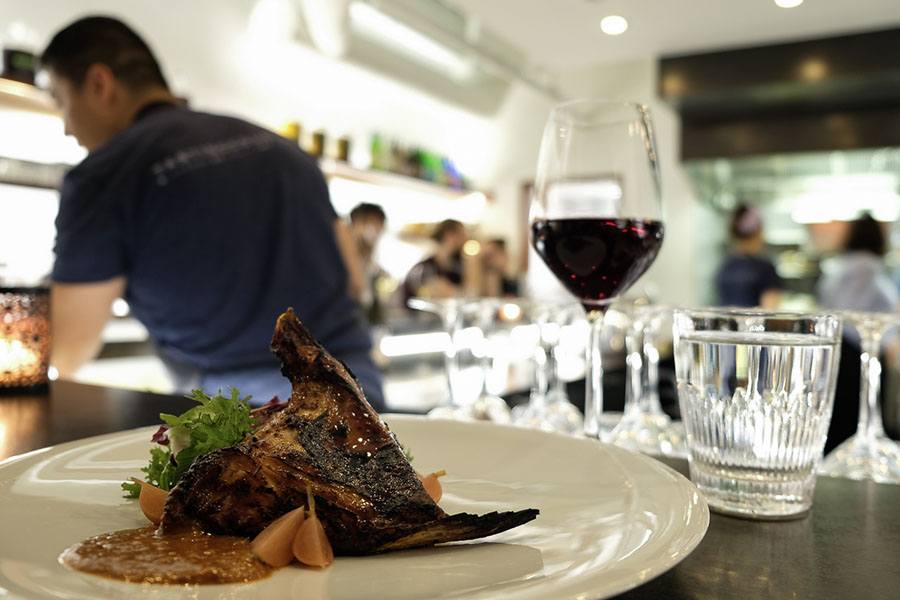 In a remote corner of Somerville, chef Peter Ungár and crew whip up an ever-changing tasting menu of cutting-edge dishes. For a more impromptu (and less expensive) taste, visit the late-night wine bar after dinner most nights to dazzle your palate with $10 pours of natural wines paired with creative small plates like foraged mushrooms, squab wings, and cherry clafoutis. 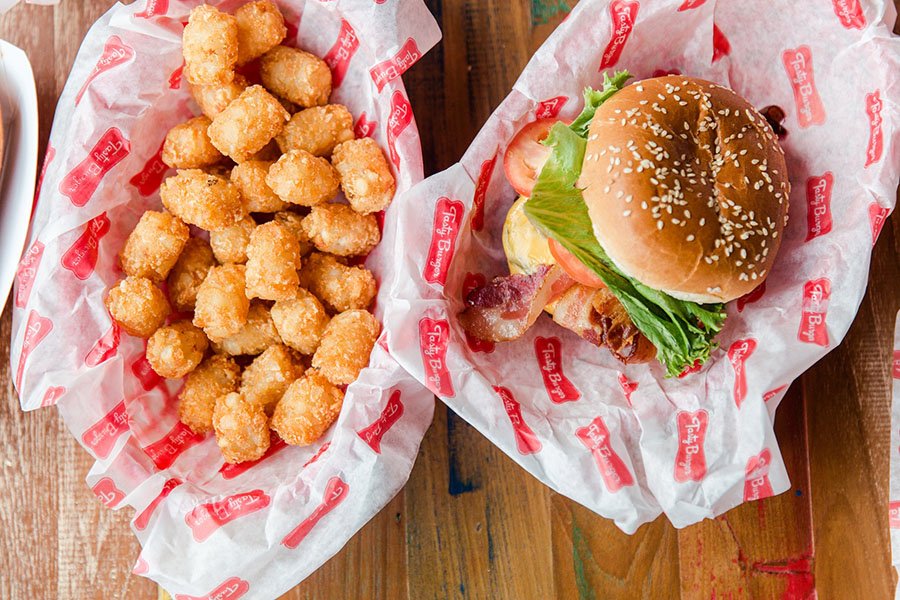 Decades ago, late nights in Harvard Square meant cheeseburgers at the Tasty. Though it shuttered in 1997, Tasty Burger has picked up the mantle, keeping its Cambridge outpost open the latest out of all four local locations: Order up until 4 a.m. on weekends. The night’s not over until you’ve scarfed down a Hubba burger, loaded with chili, cheese sauce, and scallions, and a side of tater tots—and maybe a house-made raspberry lime rickey or two. 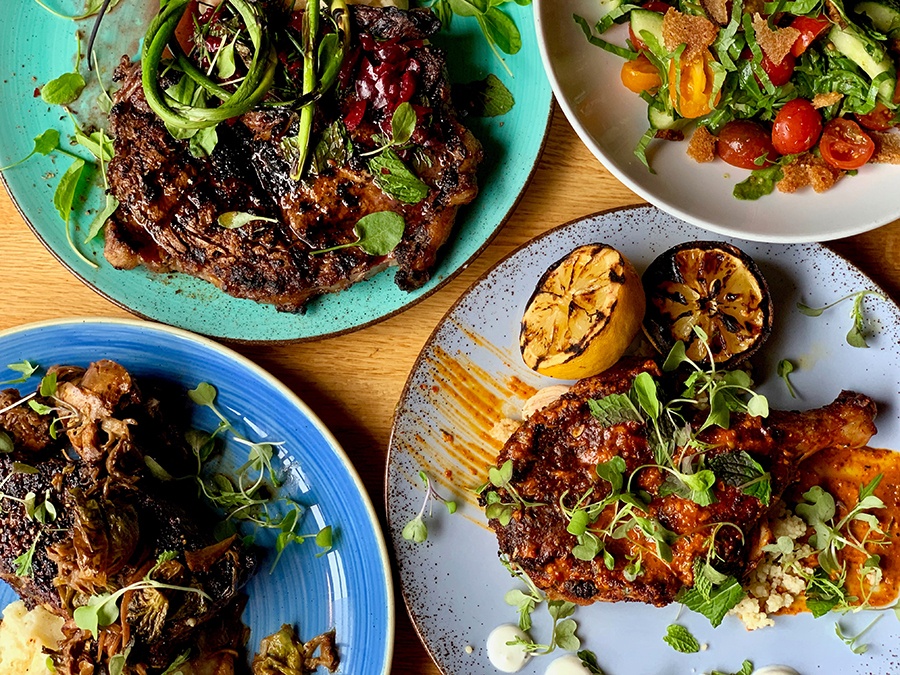 Back when Beacon Hill was the more-sedate stomping grounds of the Boston Brahmins, you might’ve had trouble snagging a late-night snack in this neighborhood. But those days are history, as chef Brian Poe’s neighborhood gastropub serves up such upper-crust comfort foods as baked Brie, braised wild boar and gnocchi, and cauliflower burgers until 1:30 a.m. nightly. A solid draft list, intriguing cocktail list, and a deep bench of bourbons helps make the thought of stumbling up those cobblestone hills in the wee hours of the morning more bearable, too.