The 11 Best Pretzels in Boston

Here are the best twists on classic knots at bars, bakeries, and breweries around Boston.

Nothing goes quite as well with a cold pint of beer as a warm, Bavarian-style pretzel. But sometimes, when you’re feeling especially knotty, you might find that pretzels taste just as great when accompanied by, say, peach-bourbon soft serve or rich milk chocolate. Check out these must-eat twists on pretzels at bars, bakeries, and breweries around Boston. 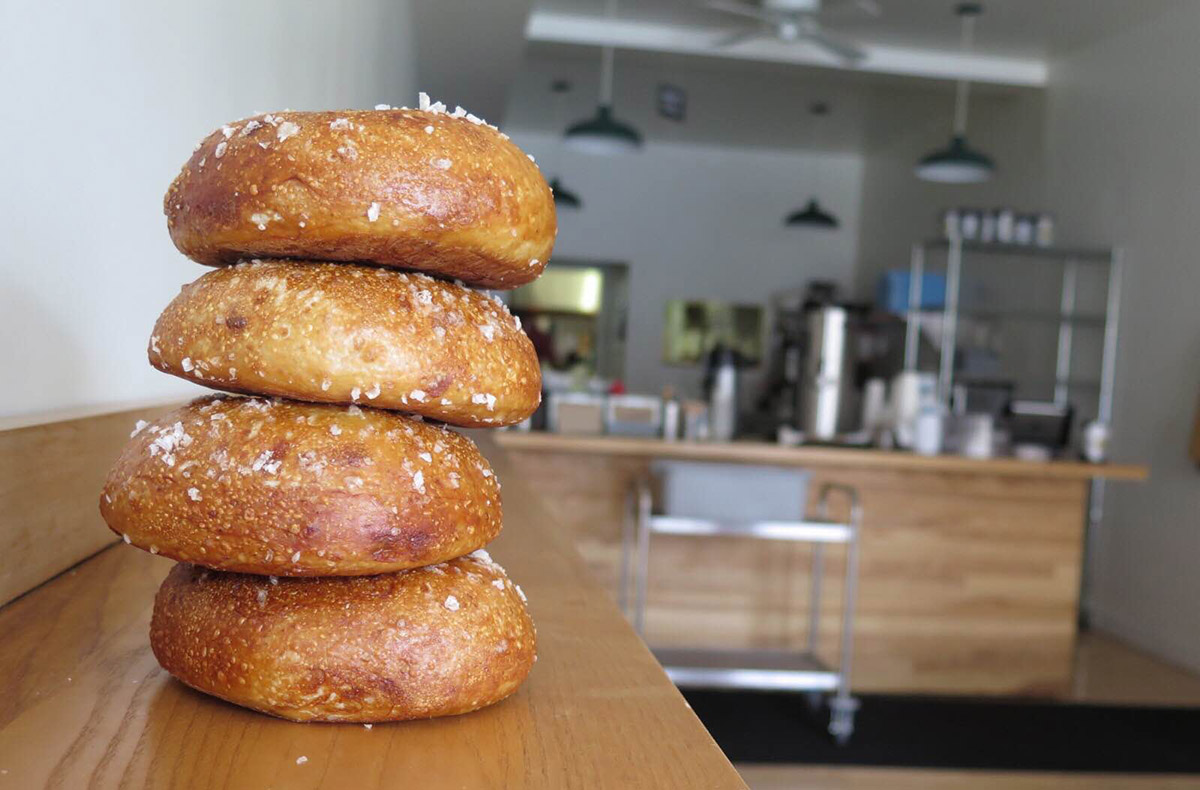 Pretzel bagels at Bagelsaurus. / Photo provided for “The Making of Bagelsaurus’s Pretzel Bagels” 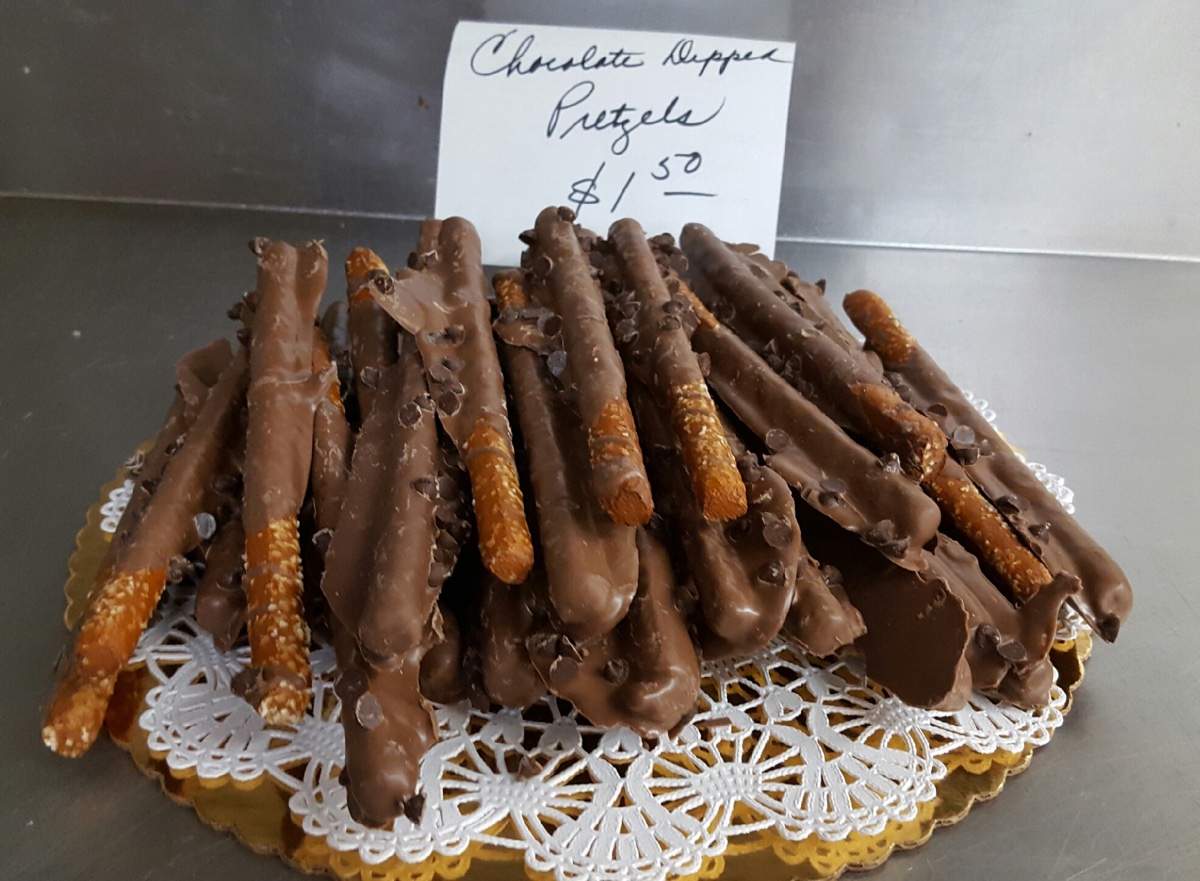 For those of us with a sweet tooth, this crunchy Utz pretzel rod will do the trick. It’s not only hand-dipped in milk chocolate, but also sprinkled with chocolate chips. Need a midnight snack? Remember, Bova’s is open 24 hours a day. 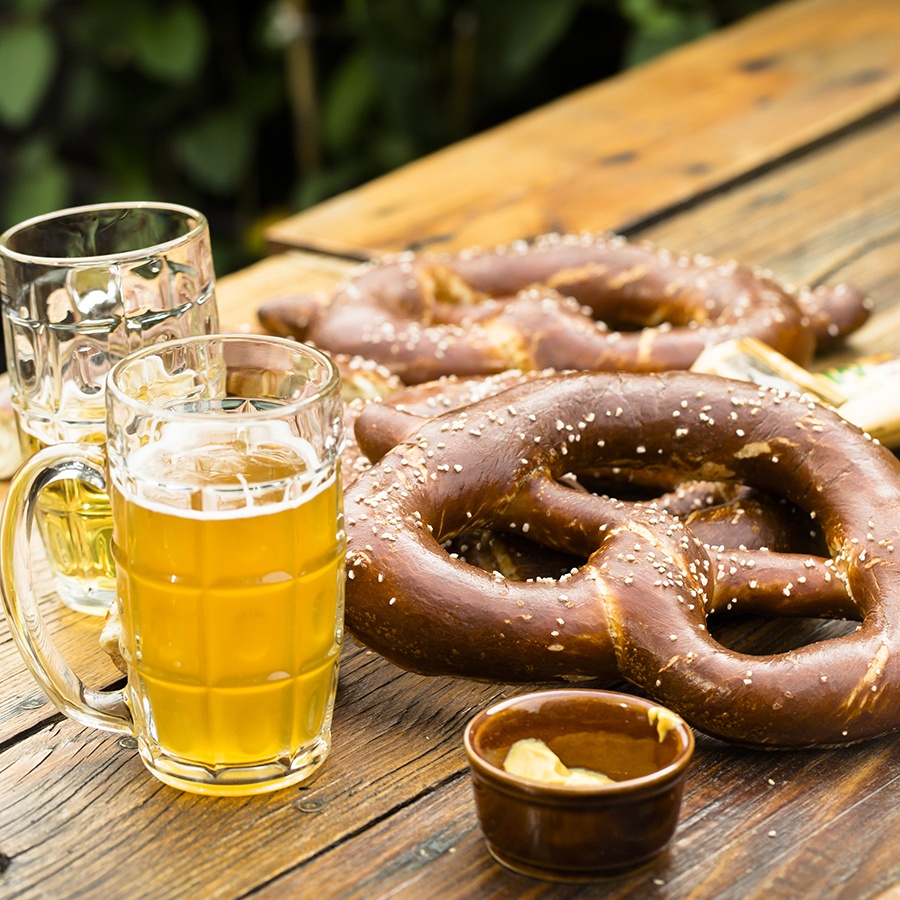 Served with nostril-clearing horseradish mustard, the haus bretzel is the perfect complement to a mug of Bavarian lager in the beer garden. Still hungry? Have the Brondog, the restaurant’s famous footlong frank, which arrives topped with cheese and chili in a hearty bretzel roll. (Early birds, meanwhile, can start their day with a Pretzel-Everything bagel from chef Tim Wiechmann’s neighboring Montreal-style bagel project, Turenne Bagels.) 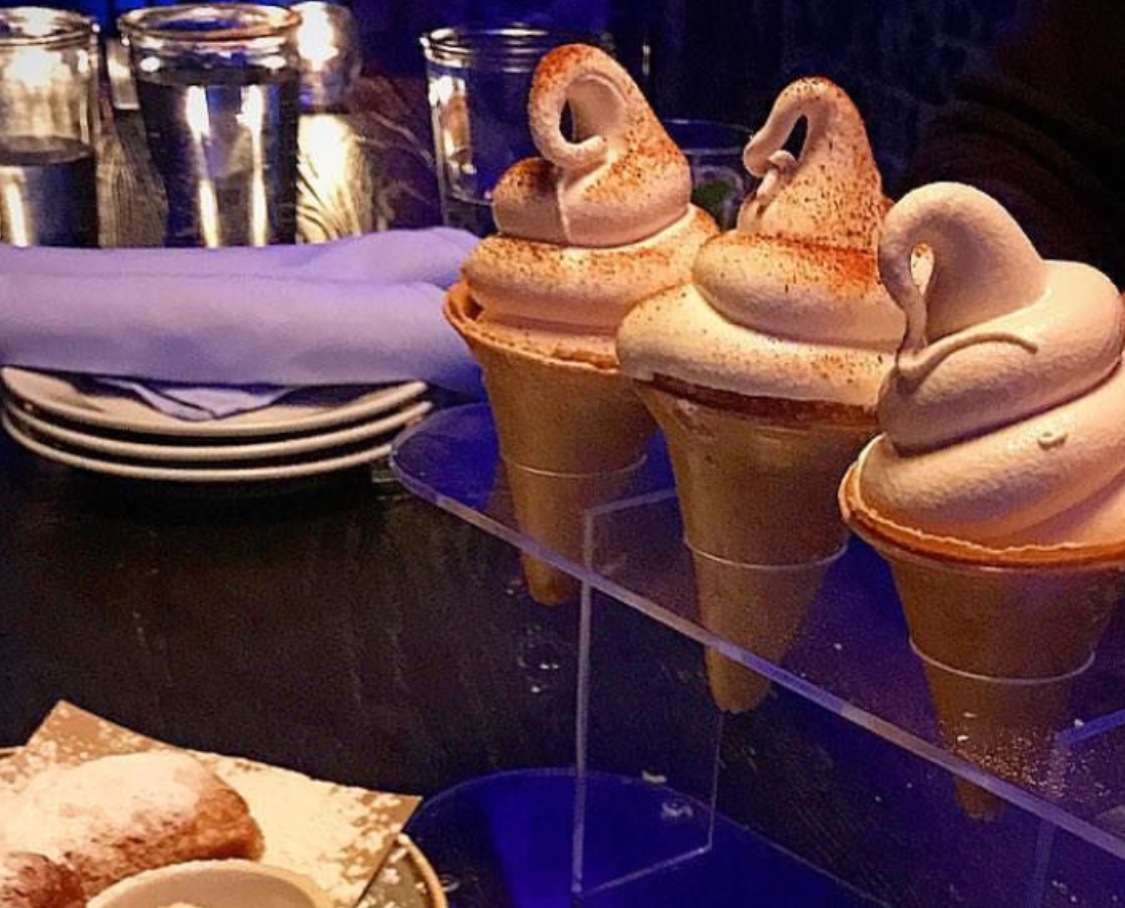 Ice cream in a waffle cone? Not at chef Jason Santos’ New Orleans-inspired Back Bay boîte, which will open a second location at Arsenal Yards in Watertown in July. The chef keeps things offbeat with chewy and salty pretzel cones for house-made soft serves. It’s a perfect complement for rotating flavors like salted caramel, smoked cinnamon, and peach bourbon. 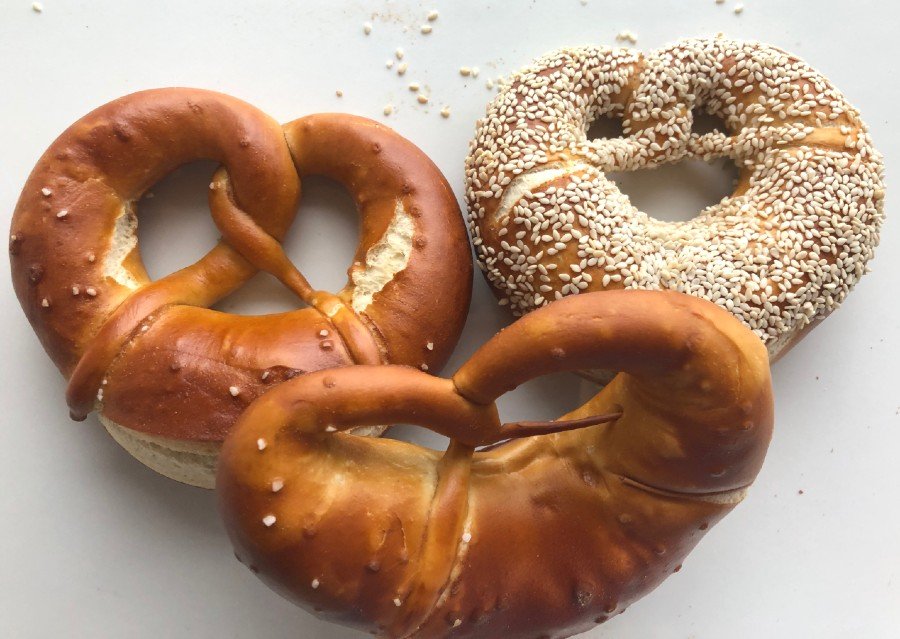 Soft German pretzels with mustard butter are a weekends-only treat at this venerable bakery—and so are the delectable pretzel croissants made in-house every Friday-Sunday.

Considering that cofounder Jeff Wetzel is former brewmaster for Everett’s BearMoose Brewing Co., it’s perhaps no surprise that this other venture—one of the area’s hottest new restaurants—has a penchant for beer’s perfect bedfellow: pretzels. Over at Deep Cuts Deli, you’ll find a slew of sandwiches as well as a standout soft pretzel that is covered in Everything Bagel-inspired seasoning and served with mustard or beer cheese.

Sadly, Eastern Standard Kitchen in Kenmore Square is no more—and the team members behind it, as well as some now-former sibling spots, are moving in different directions. At least ESK restaurateur Garret Harker has seen his now-national pretzel brand explode during the pandemic; business was already on the upswing once Oprah named its salty, knotted breads among her favorite things. It’s no wonder. These local-made perfect pretzels, carried by local bars and restaurants (such as Trinktisch, a hot new beer hall) and available to ship across the country, set a new standard. For that matter, so do Eastern Standard’s gourmet dipping sauces (like hot truffle), flavored salts (such as hickory smoked BBQ) and sugars (including chocolate espresso) for sprinkling. 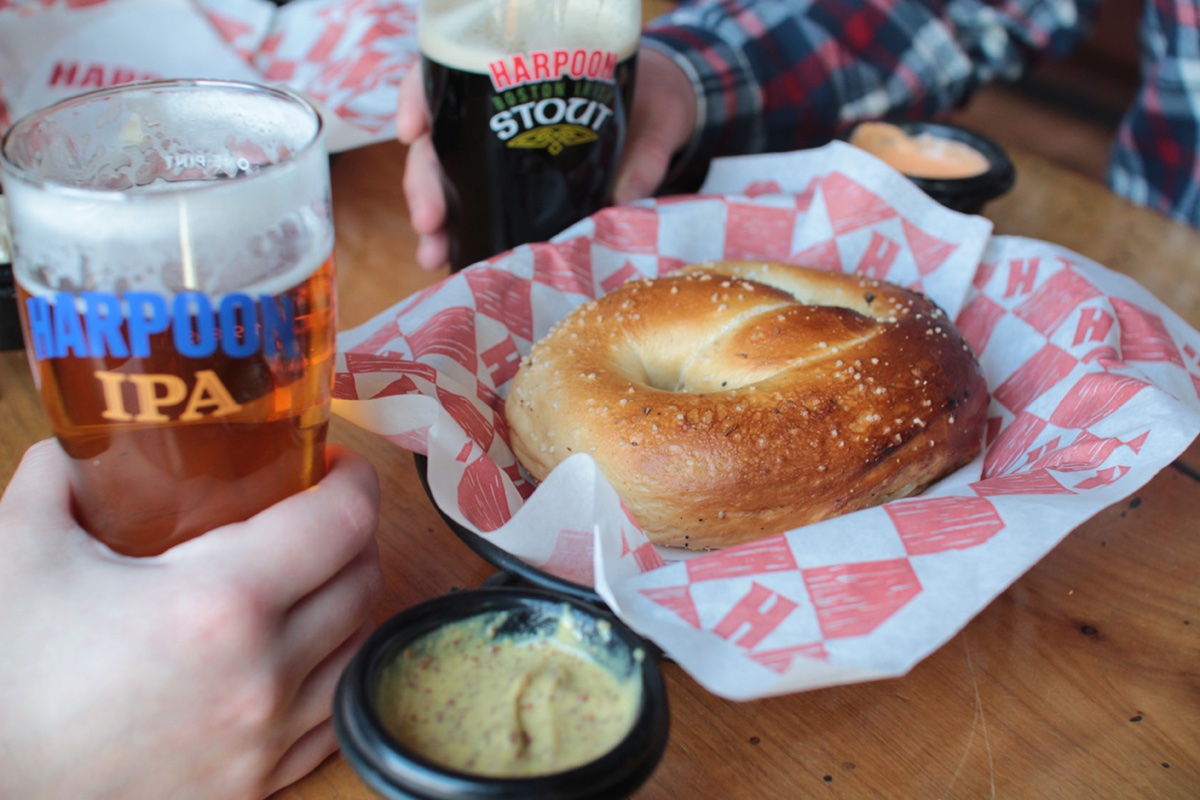 Pretzels are not to be overlooked at the Harpoon Beer Hall. / Photo provided

At this Seaport beer hall, salty-sweet-pillowy dough is made with spent brewery grains, and each knot is boiled in the flagship IPA and sprinkled with pretzel salt and malted barley from the brewhouse. House-made sauces include IPA cheese, ale mustard, garlic butter, and bacon ranch. In the mood for something sweeter? Harpoon also has cinnamon sugar-dipped pretzels served with maple icing and salted caramel dips.

Of course this Bavarian-style beer hall (with a beautiful beer garden) has an exemplary soft pretzel. Found in the “bar fare” section of the menu, it’s made with House Lager and comes with zippy horseradish mustard and creamy beer cheese for dipping. 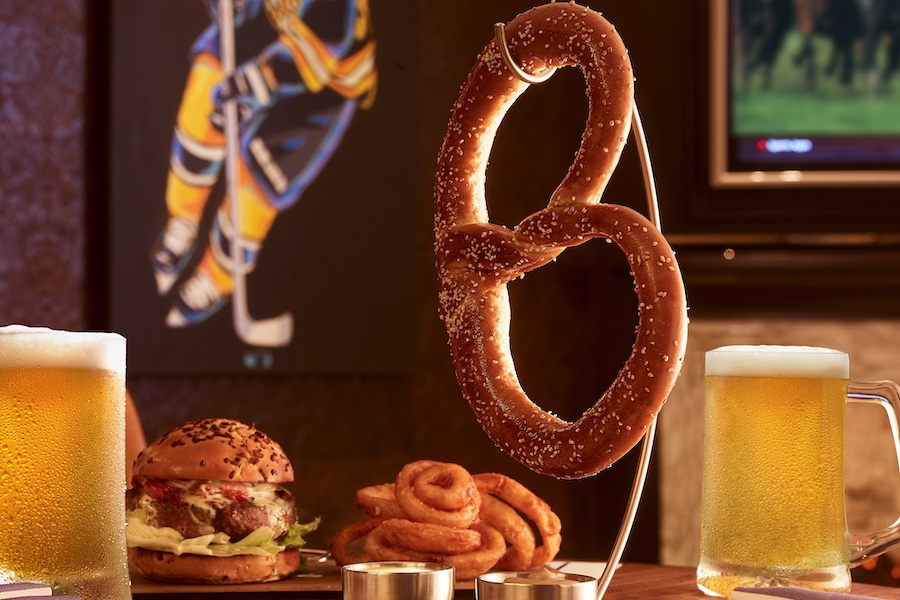 The half-pound beef burgers at this Encore Boston Harbor restaurant aren’t even the biggest draw on the menu—no, that honor belongs to the giant one-pound soft pretzel. It’s served with stadium-style mustard and beer cheese from Night Shift, the Everett-based craft brewer that just opened a new restaurant inside the casino. (You’ll find a pretzel there too, but On Deck’s oversized option is the clear go-to during a night out on the gaming floor.)

We can’t stay neutral on the pretzels at this Swiss-inspired bakery in Allston (which also has a suburban sibling in Reading): they’re delicious, whether ordered in traditional knotted, stick, or roll form. It’s also not unusual for Swissbäkers to come up with really creative shapes—say, bunny pretzels to celebrate Easter.