Where to Warm Up with the Best Stews in Boston

Allow us to spoon-feed you a few favorites, from Guinness beef stew to spicy Ethiopian wats to seafood-filled Brazilian moquecas.

If you’re having trouble beating the mid-winter blues, find comfort in a fragrant, flavorful, and wholesome stew, served hot from a pot and sure to soothe.  Thickened, simmered soups can be found in cuisines across the globe, from spicy Ethiopian wats to seafood-filled Brazilian moquecas; allow us to spoon-feed you a few of our favorites. 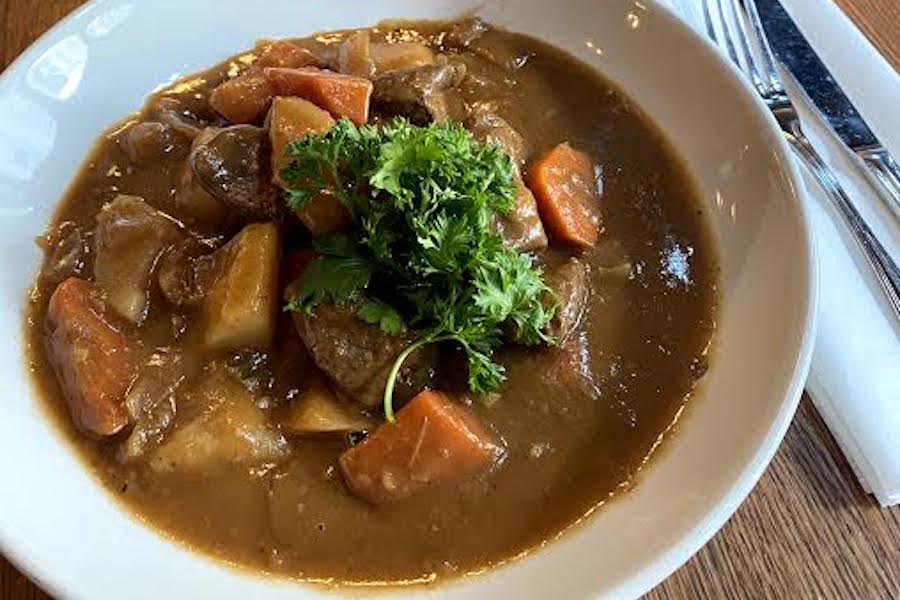 Photo courtesy of the Black Rose

We’re still in a pandemic, so Faneuil Hall-side bars may not be pulling pints of Guinness at the rate they used to—but next time you’re downtown, you can still visit this Irish pub for the Guinness beef stew. It’s made from the trim cut from sirloin and uses just the right amount of fat, cooked until it’s soft and tender.  Veggies like carrots, celery, and onions are seasoned with thyme and sautéed with butter, then mixed in a concentrated beef stock; it’s all enriched with potatoes and a roux of butter and flour to thicken things up. Finally, draft Guinness stout, poured into the heated broth, offers the stew dimensions of sweetness and deep maltiness. Cheers to that! 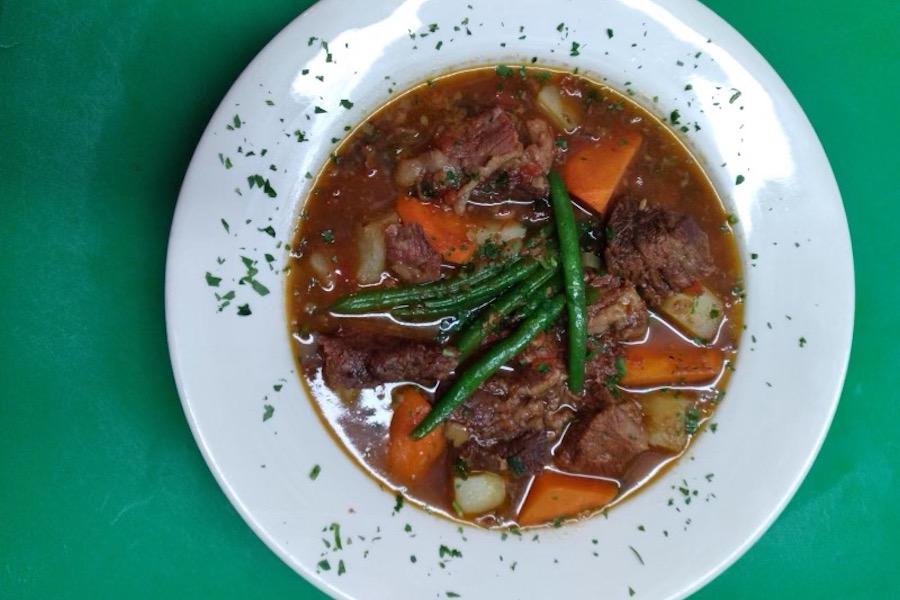 Photo courtesy of the Druid

Housed inside the oldest wooden mercantile building in Cambridge, this timeless Inman Square favorite is beloved by locals for its homemade Irish fare and American pub classics, including the standout Druid beef stew. The meat comes from short ribs, which is marinated for three days; the juice is saved to add to beef stock broth, which winds up spiked with red wine, brandy, and a hearty host of pan-cooked carrots, parsnips, potatoes, and green beans. It’s the ideal winter meal, and each bowl comes with a side of Irish soda bread made from an old family recipe. 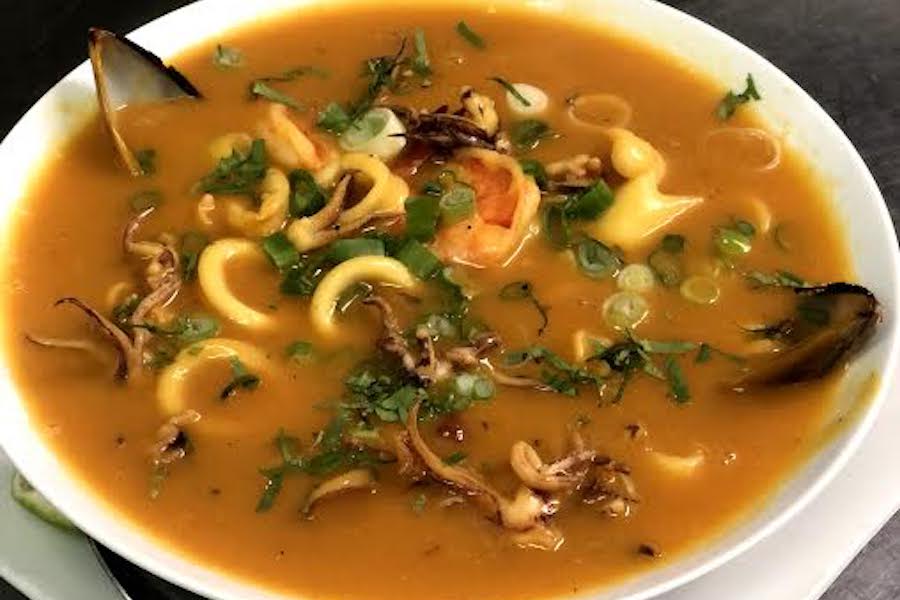 Decorated with Peruvian artwork, this Union Square restaurant evokes the spirit of the Andes Mountains—its seafood stew, meanwhile, calls up the vibrant flavors of the South American coast. Grab a spoonful of the parihuela, a creamy soup brimming with squid, mussels, tilapia, and more in a rich base of shrimp stock, cornstarch, and tomatoes. The robust bowl gets its heat from the yellow aji chili pepper, not to mention its complex broth inflected with parsley, turmeric, paprika, onion powder, and cumin. It’s no wonder that parihuela is popular with fishermen in coastal Peru, according to Machu Picchu manager Angelica Cortez, who says this recipe is based on one her mother prepared back in Lima.

Nirvana the Taste of India

Known in pre-COVID times for its sumptuous lunch buffet, this contemporary Cambridge restaurant covers cuisine from all regions of India. When you crave just a hint of spice, try the sambar stew, which is traditionally a South Indian specialty (though it’s certainly popular throughout the country). It’s a vegan dish that features two different kinds of lentils, as well as green beans, carrots, tomatoes, okra, and Saijan, bittersweet seed pods more commonly known as drumsticks. All of this mingles in a fresh and tangy tamarind broth with curry leaves, asafetida powder, mustard seed, and dried red chilies. Sambar is often served with dosas, rice and lentil doughnuts known as vada, and idli rice pancakes, all of which can be ordered a la carte at Nirvana—and we’ll be doing so even after that lavish buffet is back in action.

The bibimbap and noodle dishes are signature dishes at this Korean eatery, but when you’re looking to warm up from the winter chill, look to their stews. In particular, the superlative soft tofu stew features crumbled bean curd in a simple, light broth, with optional toppings of seafood, pork, or beef; it comes served in a hot stone pot, topped with a raw egg that is meant to be mixed in, so that it cooks with the liquid. There’s also a knockout stew of kimchi and pork: Fermented cabbage is prepared with ginger, shrimp paste, onion, and ground chili pepper to make the spicy house-made kimchi, then added to a pork bone broth with pork belly, mushrooms, garlic, and slices of firm tofu. It all winds up with a satisfying, crowd-pleasing consistency—not too thick, not too thin.

A wat is an Ethiopian curry or stew that gets its bold punch from a berbere spice blend, frequently cooked with meat and vegetables. At Sheger in Cambridge, wat takes on a variety of forms, all of which trade in the traditional use of clarified butter for a healthier canola oil. Try the Alecha wat, prepared with lean beef and green peppers, immersed in spices such as turmeric and cumin, with heat according to taste. The Key wat, meanwhile, showcases tender lamb meat in a red pepper sauce. Finally, for the herbivores among us, the vegetarian combo platter includes the Atkilt, made with carrots, potatoes, cabbage, peppers and onions, as well as the Gomen, which features collard greens or chard. All wats come with a side of injera, a spongy flatbread perfect for soaking up the stew. 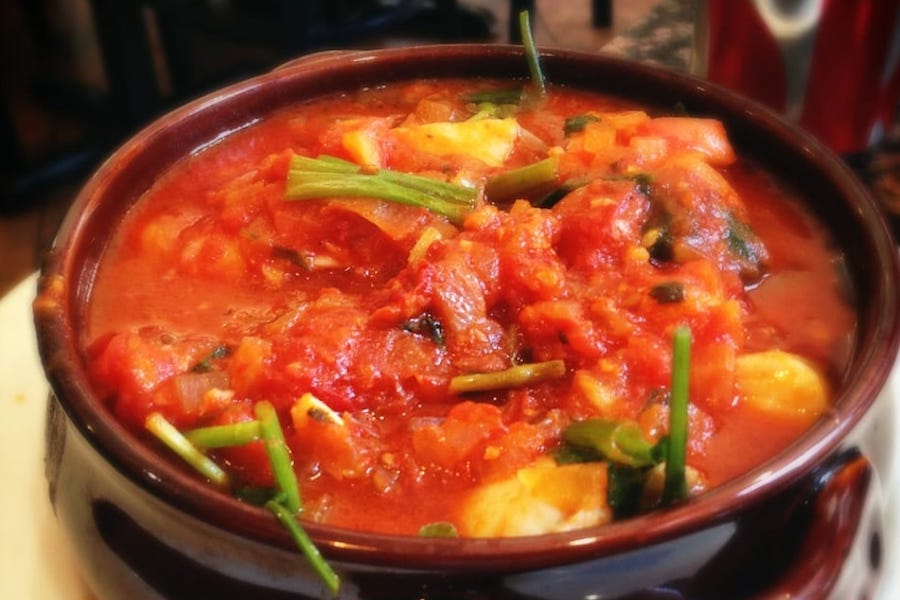 The moqueca at Theo’s. / Photo by Louie F. via Yelp

A hidden gem tucked away in the North End, Theo’s is a breakfast and lunch place that focuses on American and Italian food, but there’s also a smattering of Brazilian dishes, including moqueca, a tropical seafood stew. The diner’s version is a relatively light rendition that combines white fish and shrimp in a house-made tomato base that can be spiced to the individual heat-seeker’s level of preference. That said, when it’s topped only with cilantro and scallions (and accompanied by sides of white rice and salad), it already packs an abundance of flavor. 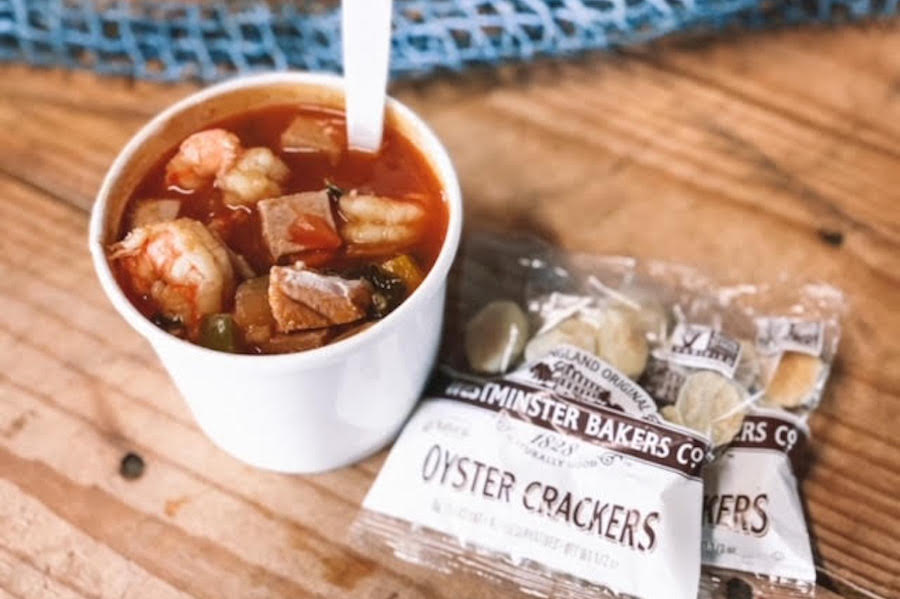 This 1950s-founded waterfront spot with harbor views is perhaps best known for its creamy clam chowder and lobster rolls. Although it conveys similarly classic New England flavor, Yankee’s excellent seafood stew brings together succulent shrimp sourced from the Gulf of Mexico, as well as tuna that is typically imported from the Caribbean or Central America. Meanwhile, a base of sherry wine, clam, and tomato incorporates rice, green beans, carrots, onion, and celery; everything gets a subtle kick from Cajun seasoning, Old Bay, white pepper, and Tabasco sauce. Inspired to make your own seafood stew at home? While you’re there, stock up on some of Yankee’s fresh seafood, including live lobster, shellfish, and crabs.