The BPL Helped Five Couples Tie the Knot for Free

For Jennifer Sheehan and Rick Thibault, winning the contest "fit the bill perfectly." 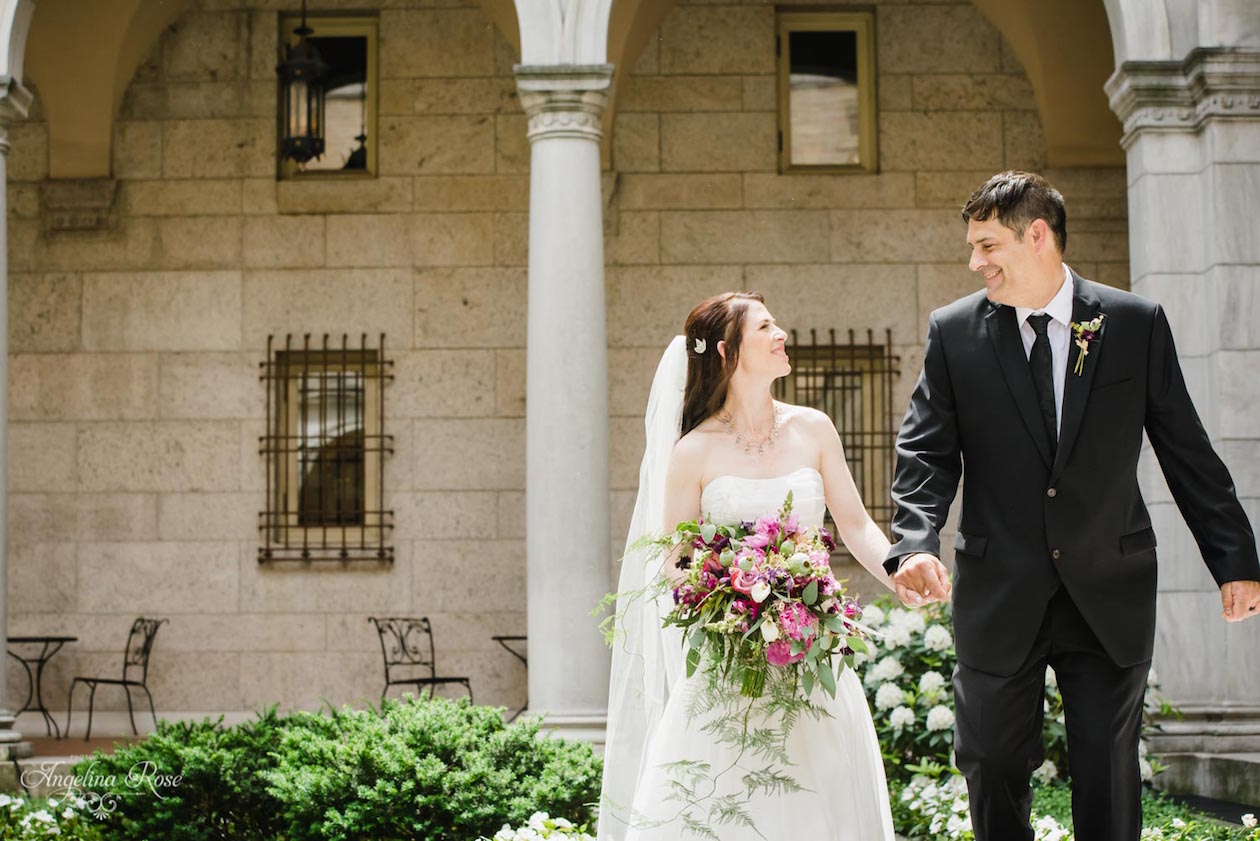 Back in February, the Boston Public Library announced that it would give away a handful of dream weddings in its iconic McKim building. The ceremony would be in the Italianate courtyard, and the library would handle all the details (though there were a few catches). June 11 has come and gone, and five lucky couples tied the knot in whirlwind library weddings.

For Jennifer Sheehan and Rick Thibault, the contest was a perfect fit. The wedding was a long time coming for the Easthampton couple. They met in high school and spent years together, only to be thwarted in their love story by the pre-cell phone era. “We agree that if we had had cell phones or Skype back then, we would have never split up,” Sheehan says. But after reuniting many years ago, the two quickly developed a romance all over again.

The couple got engaged in 2010 at Smith College’s annual Illumination Night, an event they had attended together in their younger days. The banks of Paradise Pond made a perfect setting for a sentimental proposal, and they promptly began planning a wedding. But, as is often the case, life got in the way, and they had to put that wedding off. The BPL’s free wedding offer was the perfect opportunity to finally tie the knot (especially since they already had the dress and suit!).

The bride’s mother shared the information about the contest with them. “We didn’t need a huge wedding, and we didn’t have any desire to have a big traditional wedding—we just wanted to mark it some way by a ceremony of some sort that had special meaning,” Sheehan says.

The deal meant the public library had most of the power over the ceremony, but that wasn’t a problem for Sheehan. “I guess if you were really a picky bride or groom, really particular about the flowers or the music, it would be difficult. To be honest with you, I kind of liked the lack of control because it was all planned for me.” The Catered Affair provided breakfast and beverages for all the weddings in the morning, and the ceremonies were officiated by Thomas A. Welch. Flowers were done by Artistic Blossoms, and Anima Music Management provided music for the occasion.

The eight-person party at the Sheehan-Thibault wedding included the bride’s mother and brother and the parents of the groom, plus Rick’s children from his first marriage, Michael and Mary, and the bride’s best friend, who served as maid of honor. “My son was rather nonplussed that he had to wear a suit, but he did it, he pulled it off, and did it well, and we’re proud of him for that,” Thibault says. “And my daughter was really into getting dressed up. Normally she’s very much a soccer playing tomboy, but she loved getting all dressed up.”

Their ceremony was at 11:30 a.m. on Sunday, June 11, in the courtyard of the McKim building. Following the 15-minute ceremony, they made their way to Atlantic Fish Company, the bride still fully dressed from her library wedding. “People are really happy to see a bride, and a lot of people were congratulating me,” she says of the experience. There they had a three-hour lunch in a private room, complete with a cake from Rosie’s Bakery. The couple also plans for a barbecue sometime this summer to continue the celebration with more loved ones.

Though they’re just now married, the couple admits that nothing will really change about their life together. “It’s a little surreal—you go through this 15-minute ceremony, and you’re husband and wife,” Sheehan says. “It’s not official until the town clerk gets your signed marriage license, but other than my health insurance options being a little more expansive, it’s really not gonna change that much.”