The Vibe for This Couple’s Newport Wedding? Coastal Cool.

They tied the knot on a dock at the Bohlin and then celebrated under a stunning Sperry tent. 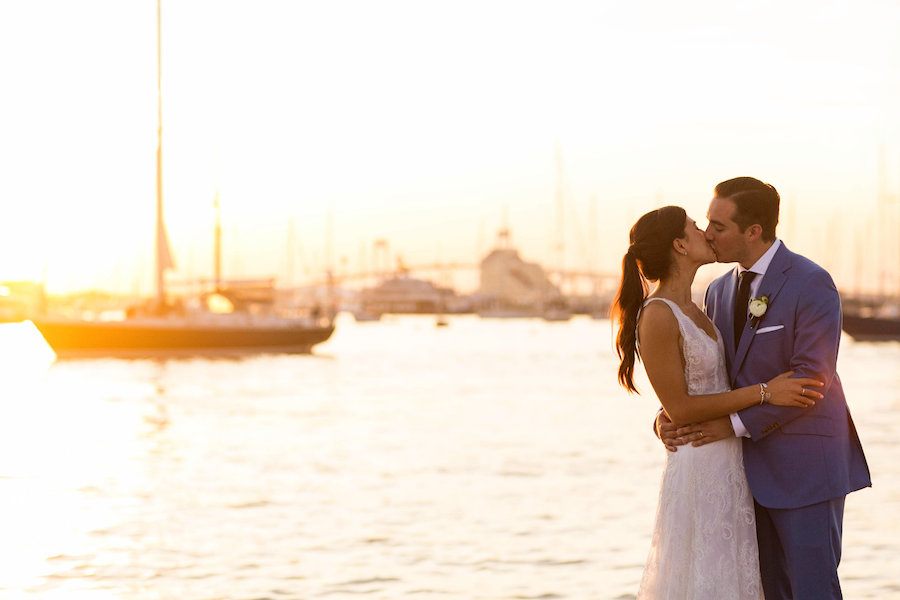 Sarah DiFrancesco and Matt Baren met through mutual friends when Sarah moved to Hoboken, where Matt lived, in 2013. The two would often spend time together with their larger group of pals, but one of Sarah’s best friends and future bridesmaids, Genevieve, pushed them to get together. “She was always talking to me about Matt, egging me on to have more of an interest,” Sarah says. Eventually, about a year after they met, Sarah and Matt started dating. “[Genevieve] was so excited. She always thought he was such a nice guy and she [said], ‘I called this from day one,'” the bride says. “I was like, ‘You were always a good judge of character, but now I know you’re really good.’”

Three years later, on Mother’s Day weekend, the couple headed to Sarah’s parents house on Cape Cod to spend time with her family. The day before Mother’s Day, Matt suggested they go for a drive. When they arrived at Race Point Beach in Provincetown, Matt set out to find someone who could take their picture. Although there weren’t many people on the beach,  Matt eventually spotted an older couple walking together and “chased them down,” Sarah says. As Matt gave the man his phone, he quietly whispered that he was about to propose. “I was completely clueless. The next thing I know, Matt got down on one knee,” Sarah says. “I can’t remember if I even said yes. I was in complete shock. I started crying immediately and I wouldn’t put on the ring because I didn’t think it was real.” After the proposal, they headed back to Sarah’s parents’ house where Matt’s parents were there to surprise Sarah. “It was really an amazing weekend and so nice to get to celebrate it with our families,” she says.

When it came to selecting a location for their nuptials, Newport was an easy choice for the couple: The bride had often visited the coastal town with her mom while attending Providence College, and Matt—who grew up on Long Island—loved spending time on the water, too.  The couple hadn’t heard of the Bohlin, a tented venue at the Newport Yachting Center, but when they visited it, Sarah says they “knew instantly” it was where they wanted to tie the knot. “We could get married on the dock, and it was all outside, but then there was a beautiful Sperry tent,” Sarah says. “It had the laid-back feel we wanted but you could also dress it up.”And dress it up they did. The pair created an ambiance that was equal parts elegant and easygoing with cozy string lights and hanging greenery boxes, as well as high and low centerpieces with white roses, greenery, and other flowers. Ultimately though, it was who was under the tent that meant the most to Sarah. “Everyone in my life who is important to me and everyone in Matt’s life who was important to him was under the same roof and I just feel like will never happen again,” she says. “It was so nice.” 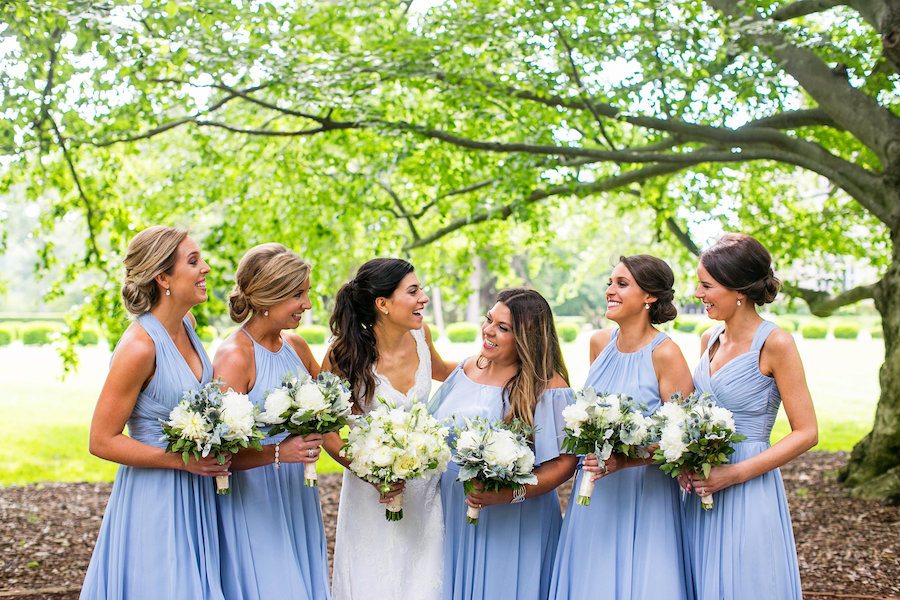 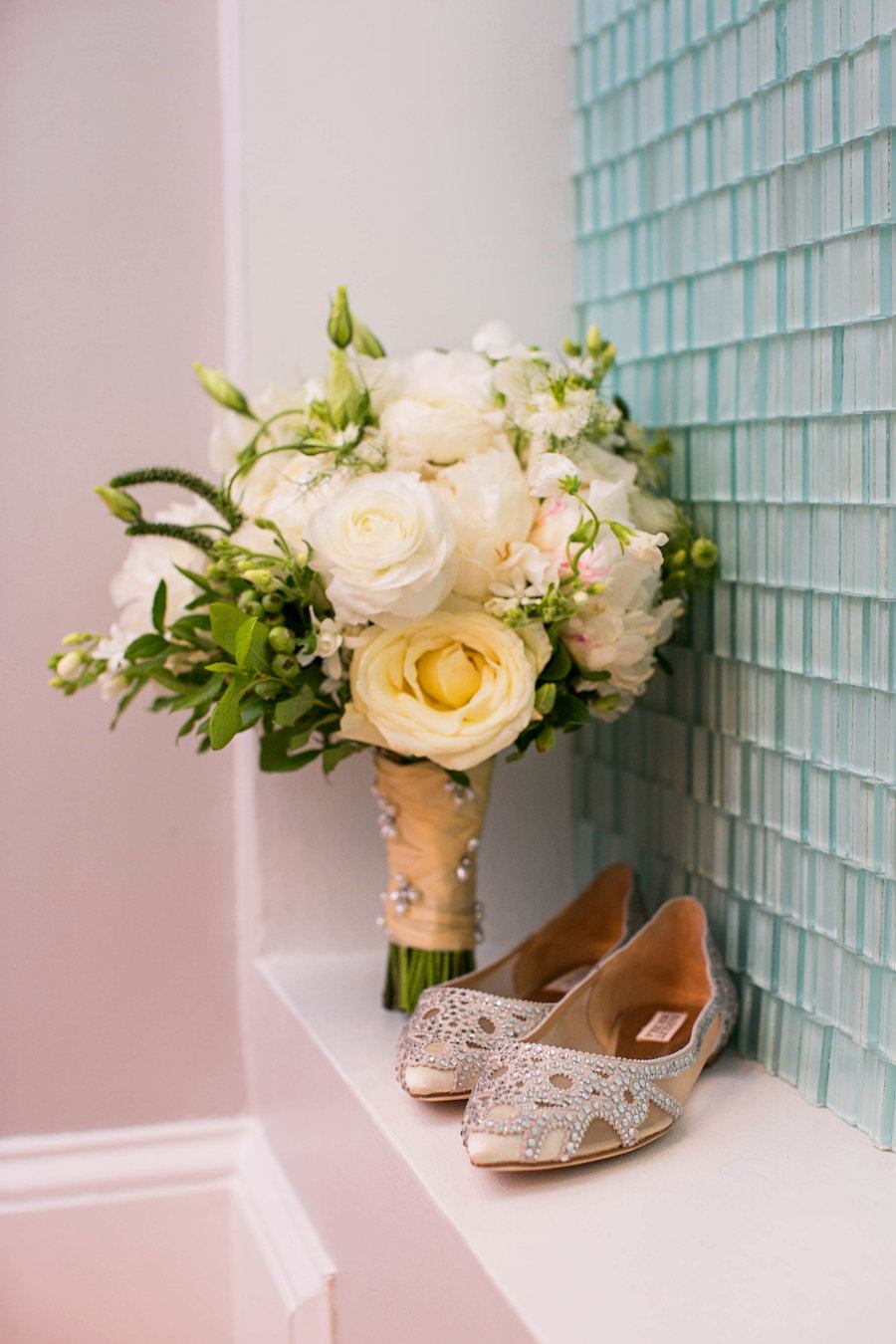 The bride wore Badgley Mischka flats at her ceremony before changing into Kate Spade x Keds sneakers for her reception.
“I was all about comfort because I’m not good with heels,” Sarah says. 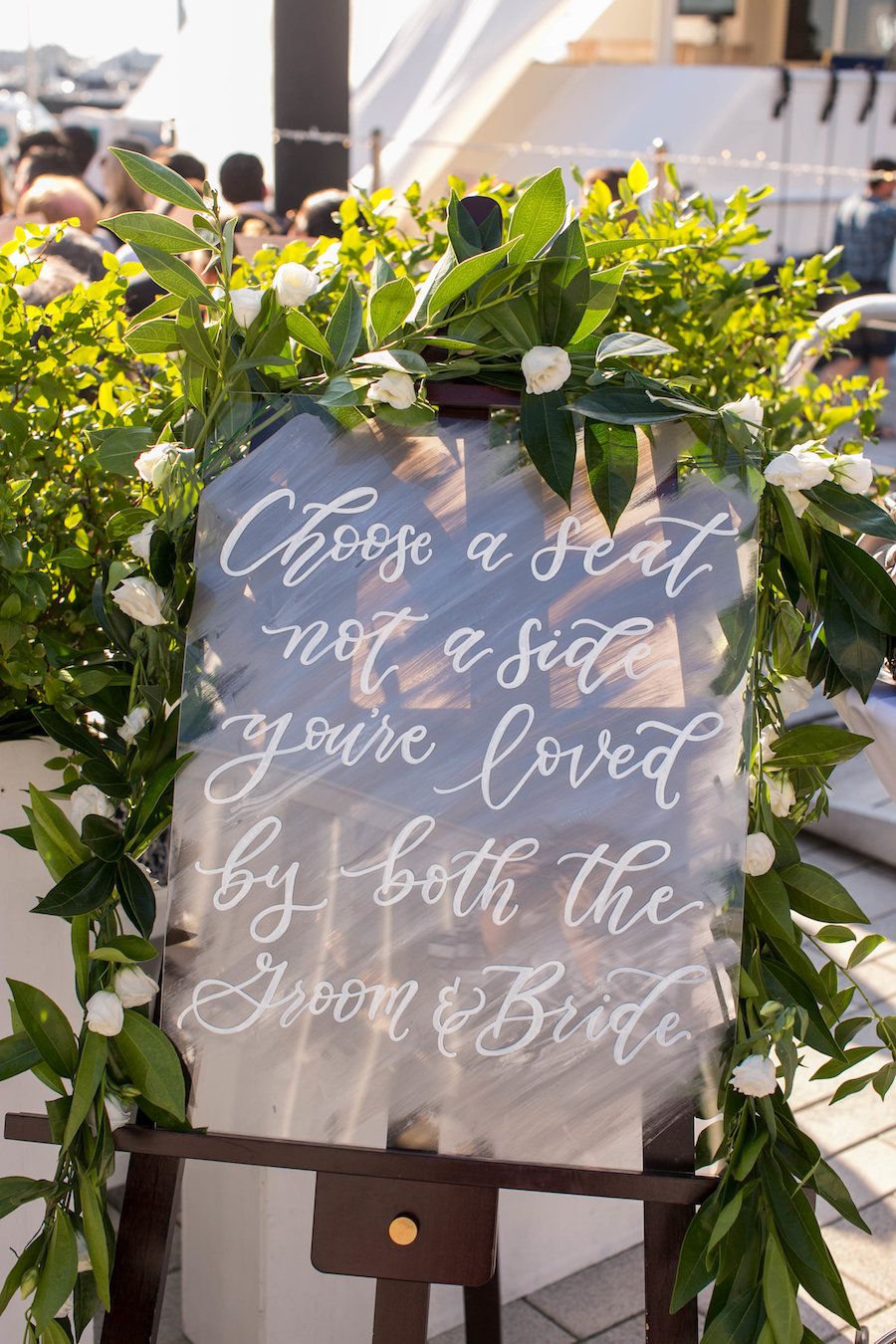 The couple encouraged guests to sit wherever they wanted at the ceremony. “We have a lot of people in our lives who cross over between us. Some of Matt’s friends have become my friends, and some of my friends have become his friends,” Sarah explains. “We wanted to just be like, ‘There [are] no sides. We’re all family and we’re all here together to celebrate the two of us.'” 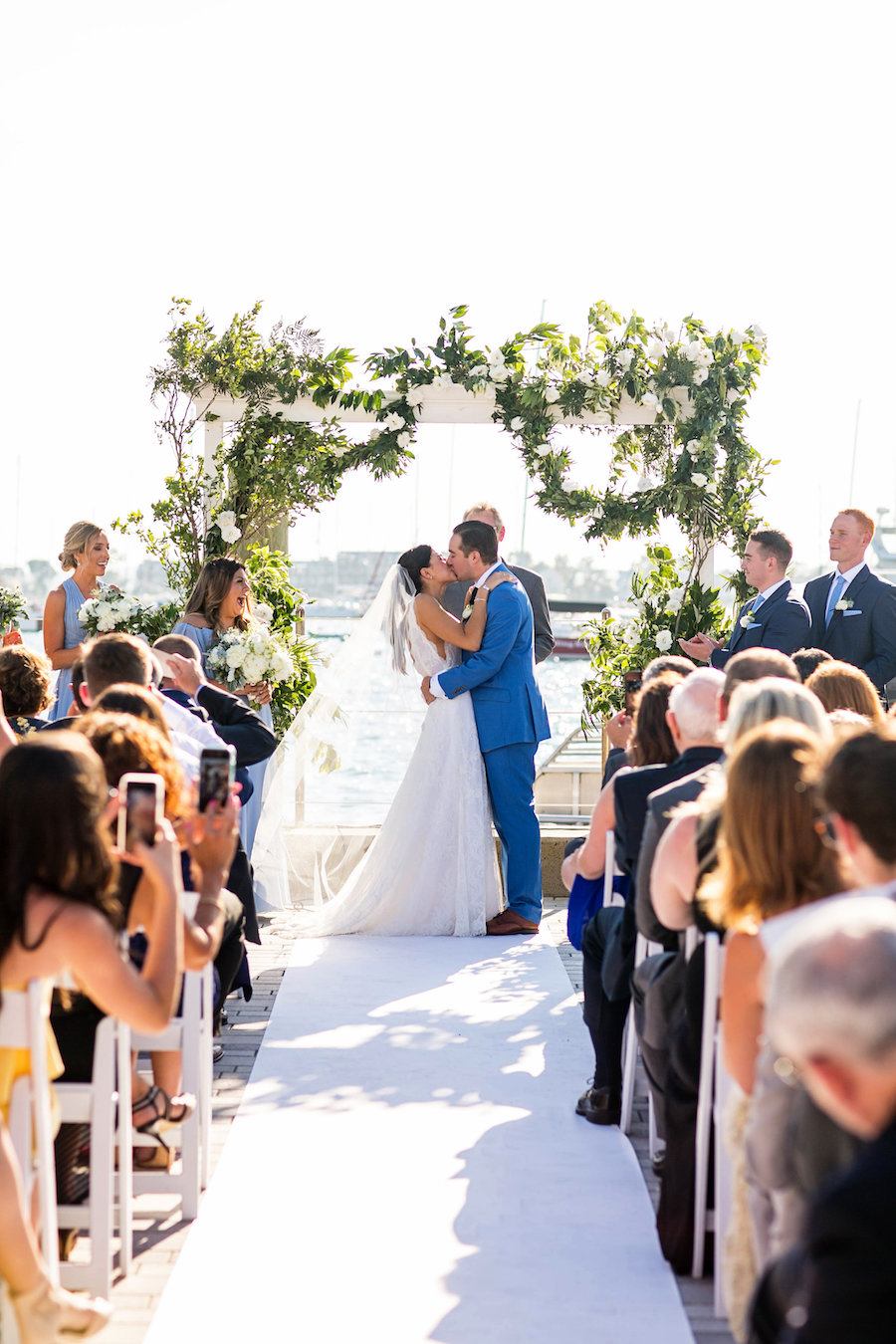 Set on a dock at the marina, Sarah and Matt’s ceremony took place in front of an arbor draped with simple white flowers and greenery. “The backdrop was gorgeous—right on the water with ships sailing by,” Sarah says. “We wanted to be able to look at and appreciate the background, but also complement it.” 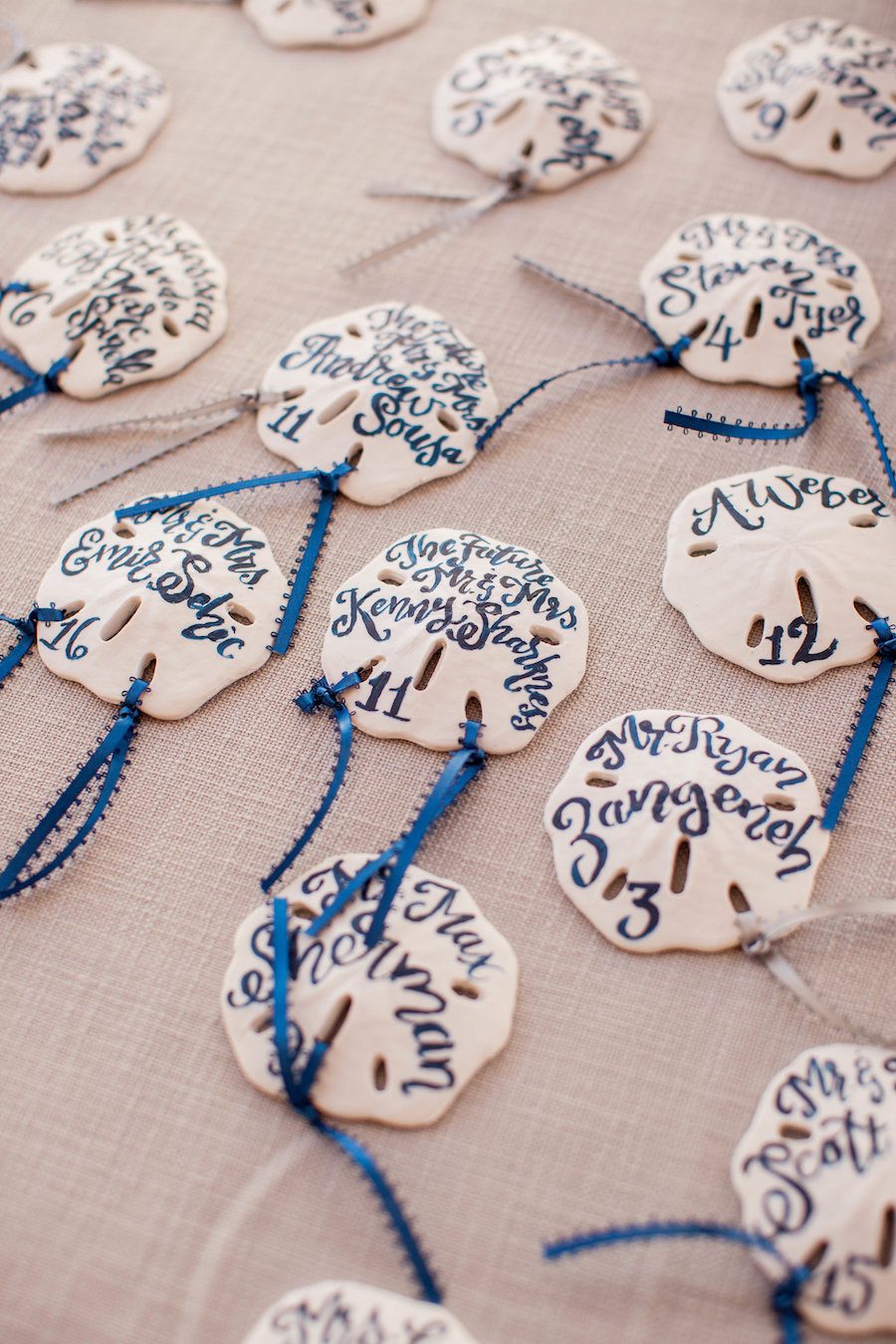 Since the escort cards would be stationed on a table outside the tent, Sarah realized she needed to make sure they wouldn’t blow away. She came up with the idea to use sand dollars, which she purchased at a craft store. She then hired calligrapher Kendra Stanton Lee to pen guests’ names on them. 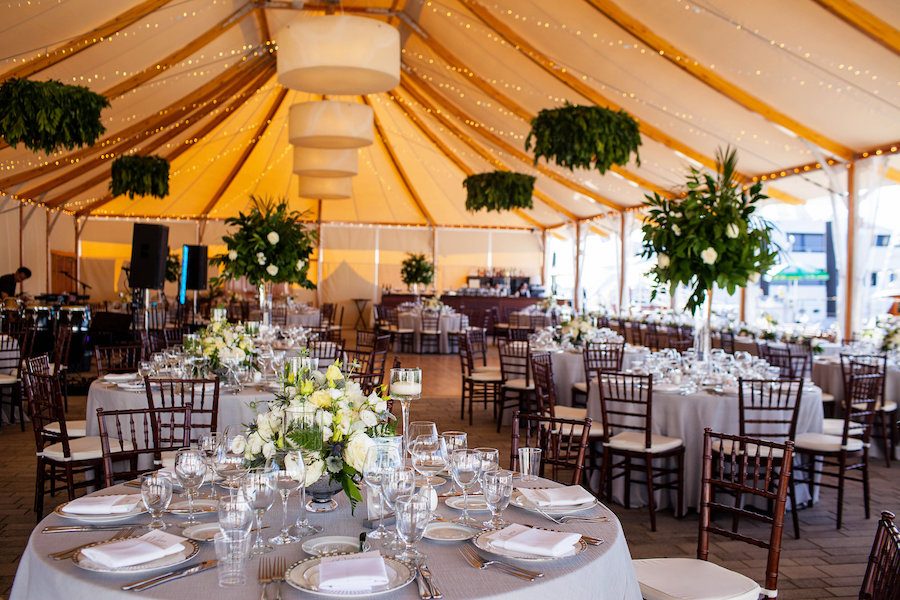 The couple’s reception took place under a soaring sailcloth Sperry tent. “Our florist suggested [hanging] greenery boxes, four of them throughout the tent, to add dimension,” Sarah says. 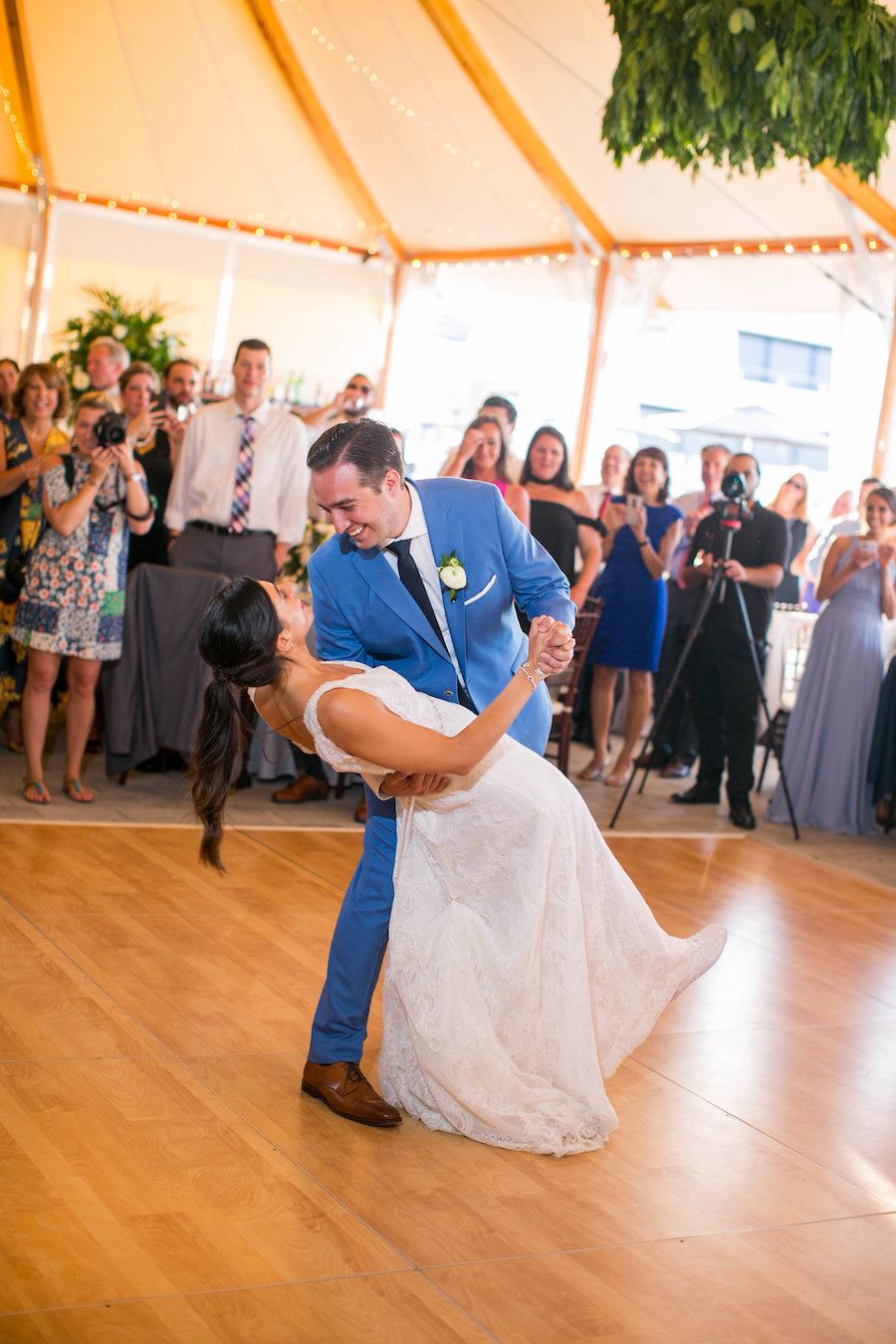 Sarah and Matt had their first dance to “The Way You Look Tonight” by Frank Sinatra, who grew up in Hoboken, where the couple met. 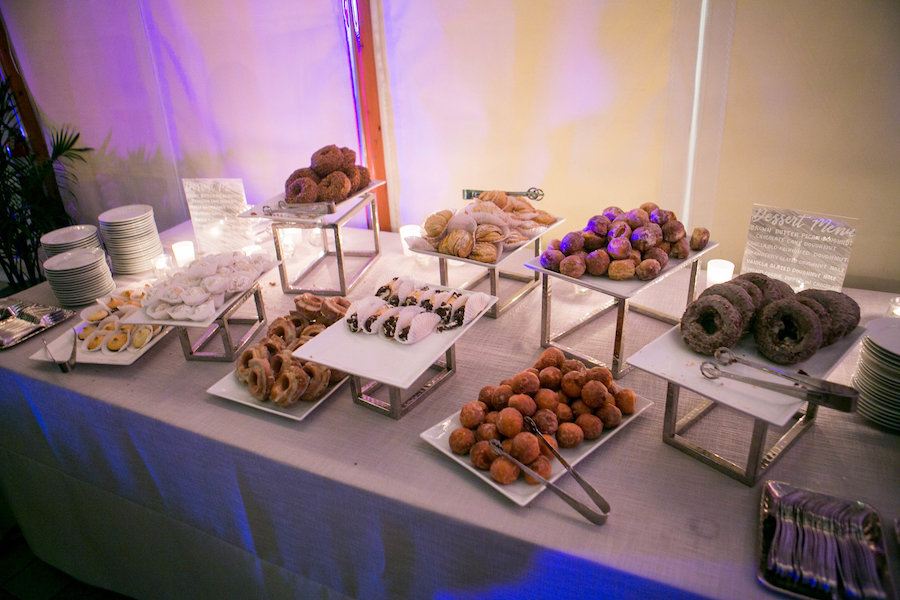 The reception featured a dessert table, rather than a cake, with doughnuts from Providence-based shop Knead Doughnuts as well as Italian pastries. “People could just go up and grab something and eat it while they were standing as opposed to having to sit down and have a piece of cake,” Sarah says.