This Dennis Inn Celebration Was All About Classic-Meets-Coastal Style

The couple accented their blue-and-white decor with plenty of greenery (including a 16-foot table garland). 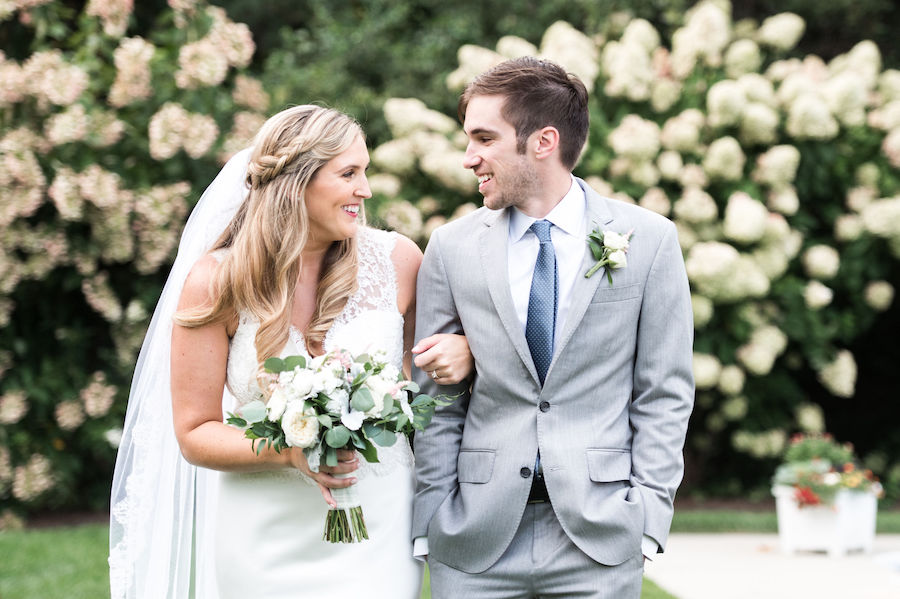 Kirsten Witunski and Alex Wilson were both sophomores at the University of Massachusetts Amherst when they met for the first time through mutual friends at a party. “We hit it off immediately and were dating within a few weeks,” Kirsten recalls. “From there, it was history.” For a brief period after college, they both moved home (to neighboring towns, as fate would have it), and later, to Boston.

In January 2017, Kirsten came home from a spin class to find a note on the door of the small apartment the couple shared in Beacon Hill. It was from Alex, and it said to meet him up on their roof deck. “It was absolutely freezing, so I looked at the note and I was like, ‘No,'” Kirsten recalls. “‘I don’t know what you’re doing up there, but it’s too cold.’” She stayed inside at first, but soon grew suspicious. “Something in my head was like, ‘That’s a little weird.'” She went up to the roof deck, where she found Alex dressed in a suit and holding a bottle of champagne. Then he proposed. “I was absolutely shocked,” Kirsten says. “I knew it was the natural progression of our relationship and we wanted to be together, but it wasn’t something we had explicitly discussed. So he absolutely caught me off guard, which I loved.”

As Kirsten  and Alex began thinking about a venue for the big day, they first decided on Cape Cod, where they’d made memories together throughout their relationship. They toured a few Cape locales, but Kirsten says she ultimately felt that the Dennis Inn would be their pick—she just had to get Alex on board. The couple went to visit the inn together with their moms, and “Alex agreed right off the bat,” the bride says, “It was so us.” The cherry on top of the perfect venue? Kirsten’s grandparents worked there while they were dating during college. “They were super excited,” she says. For the look of their celebration, the couple drew inspiration from the color scheme of the inn’s white trim and blue shutters. Since much of their celebration would take place outdoors, Kirsten says she also wanted to give the wedding an “organic feel” with plenty of greenery. For their reception, the couple enlisted local band the Cape Cod Slackers, who they’d seen perform several times over the years at a favorite bar in Brewster. “It was a no brainer that if we could get the Slackers we would,” Kirsten says. “They know how to get a crowd going, and that was probably my favorite part of the wedding.” 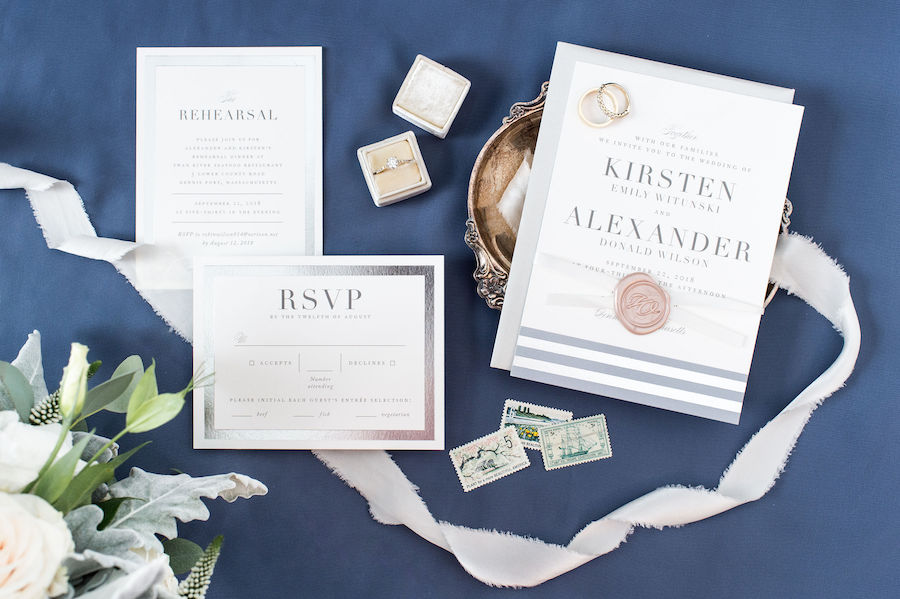 “For the whole wedding we were both pretty [attracted to] neutral colors, and I knew I wanted [our invitations] to feel very ‘us,'” Kirsten says.”They were pretty plain with some silver foil and dusty blue accents, but we wanted to keep it simple. [They] had a very Cape Cod feel.” 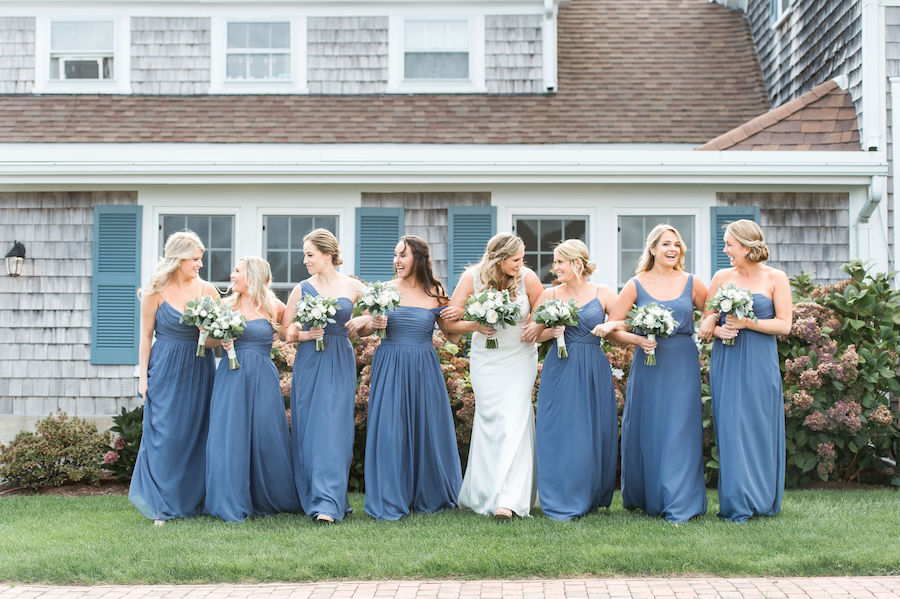 For her bridal party’s bouquets Kirsten opted for arrangements of eucalyptus, dusty miller, and ivory roses. “We wanted things to be kind of coastal without being overly ‘beachy,'” the bride says. 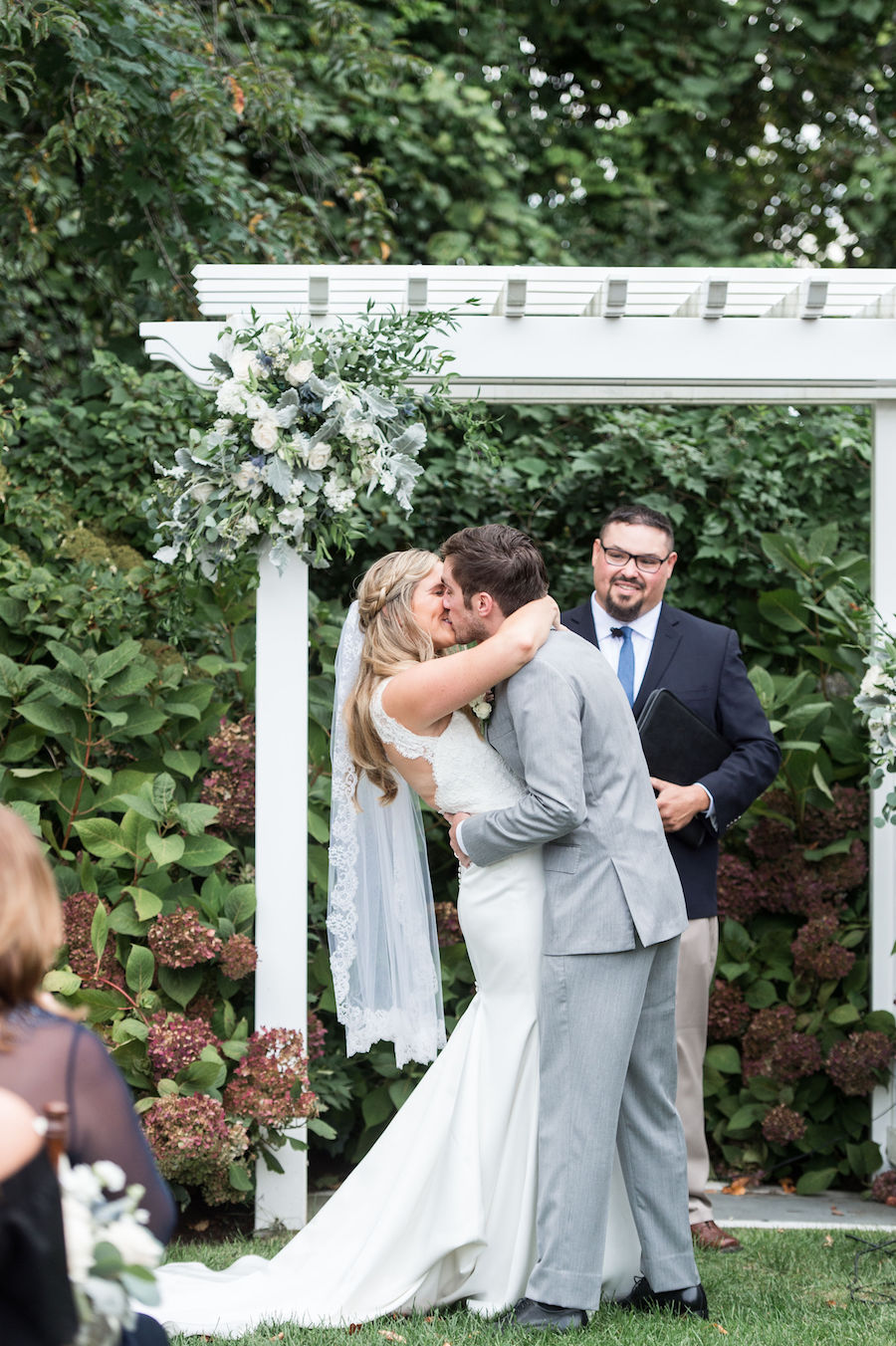 Alex and Kirsten’s ceremony, officiated by the groom’s cousin, Vern, took place in the backyard at the inn. The couple kept their ceremony short and sweet and wrote the proceedings together about two days before the wedding. 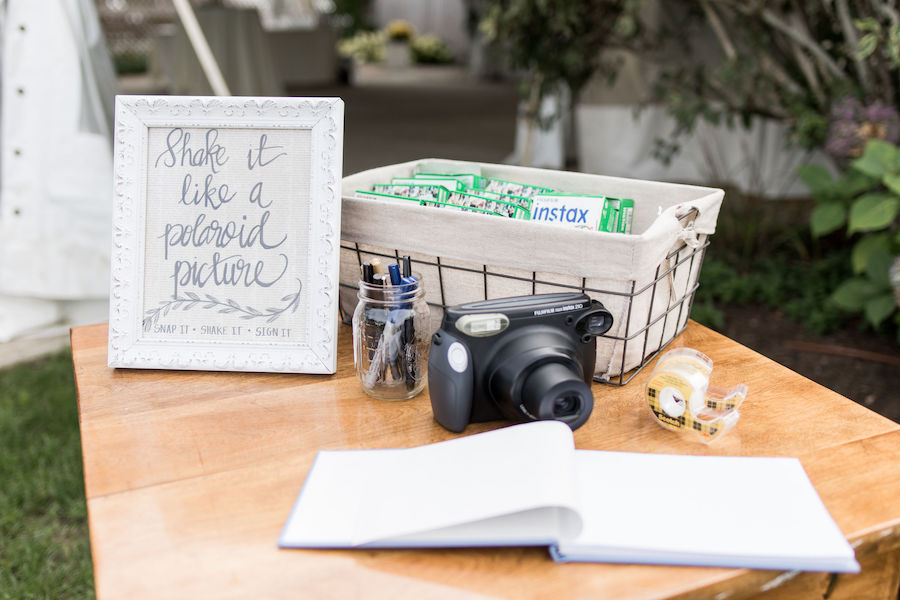 “We wanted to give guests something to do and sign [at cocktail hour] but we knew the old fashioned comment book was probably not something we’d ever really look at again,” Kirsten says. So, instead, the couple bought an Instax camera for their guests to use to take candid shots. “The day after the wedding, I woke up at the crack of dawn, pulled Alex out of bed to get breakfast, and we brought all the polaroids with us. So we got to go through those together.” 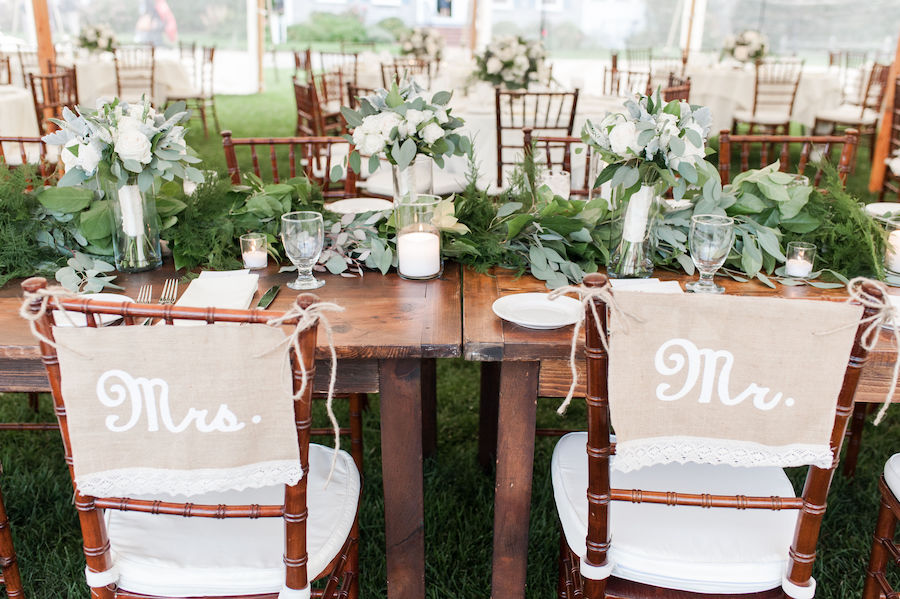 The wedding party sat at two adjoining wooden tables, adorned with a 16-foot garland, candles, and the bridesmaids’ repurposed bouquets. Kirsten borrowed the “Mr.” and “Mrs.” signs that the pair hung on the back of their chairs from a friend who recently married. 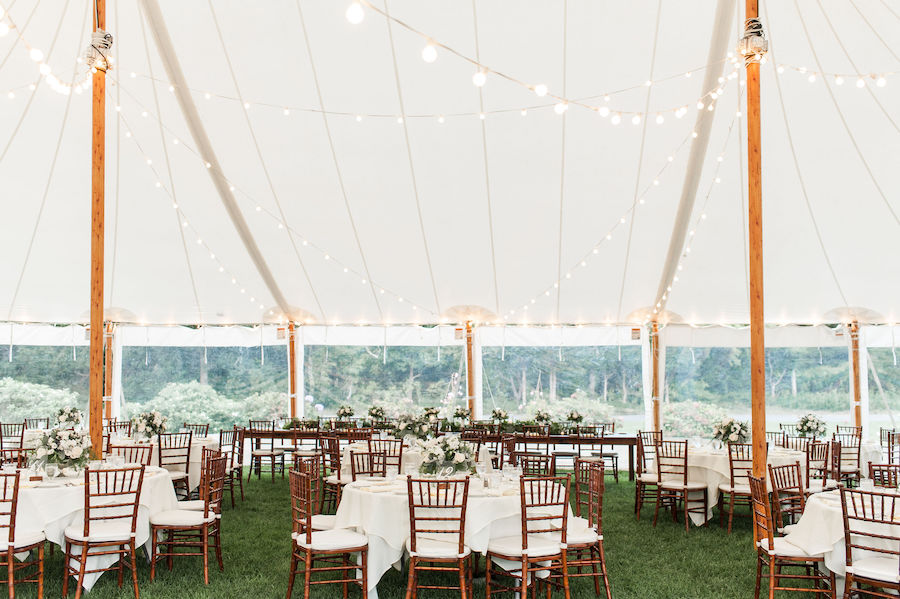 Alex and Kirsten cloaked their round tables with ivory linens, and topped them with bouquets of blue thistle, eucalyptus, dusty miller, and roses. 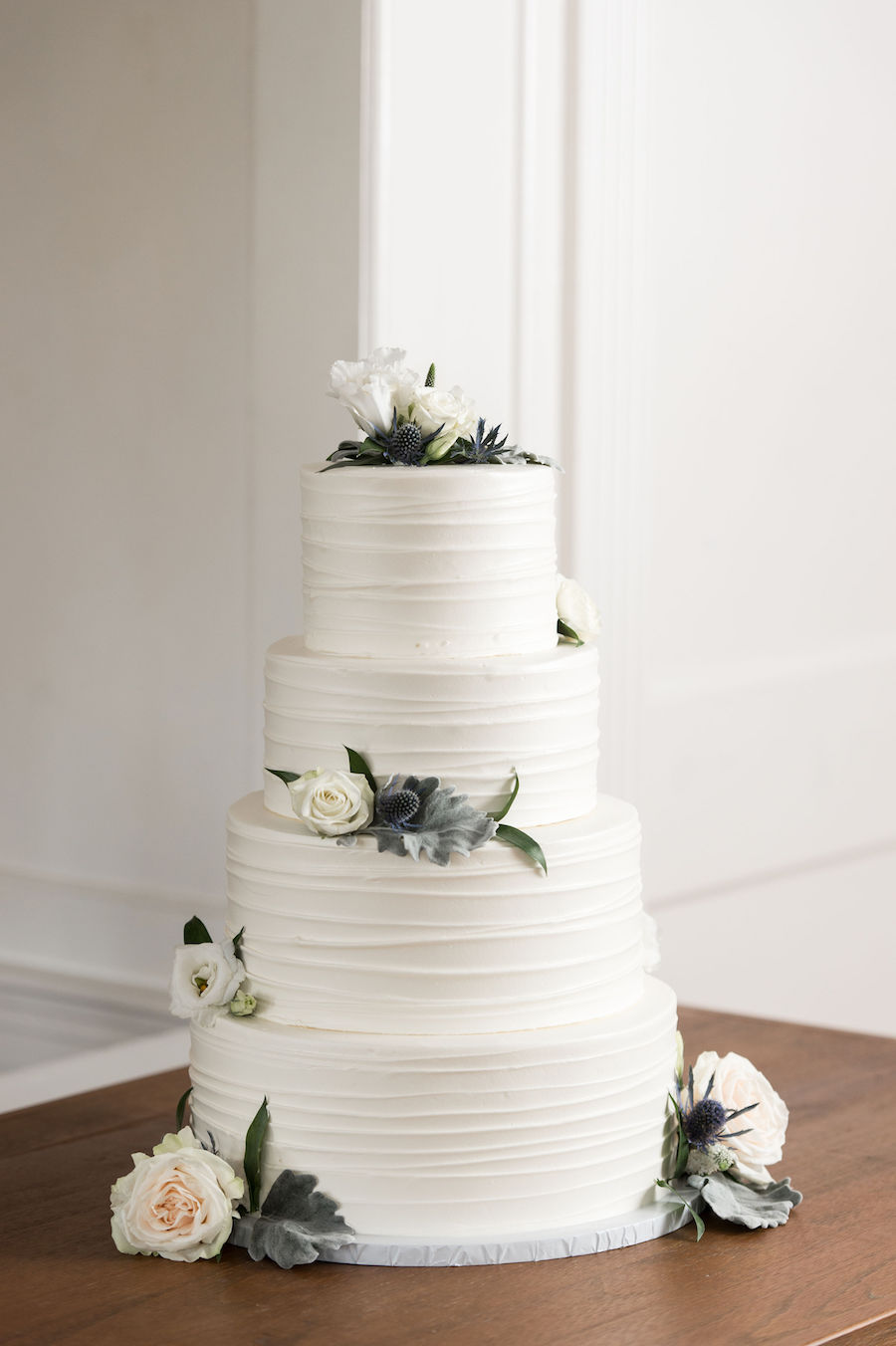 The couple’s cake featured almond and chocolate tiers with a buttercream frosting and filling. The couple wanted their cake to look “simple and clean,” and their florist topped it with flowers to match the rest of their decor. “I unfortunately didn’t get to eat any, which was kind of a bummer,” Kirsten says. “But we have a piece in our freezer. I don’t think it will live up to that for September, but we’ll find out.” 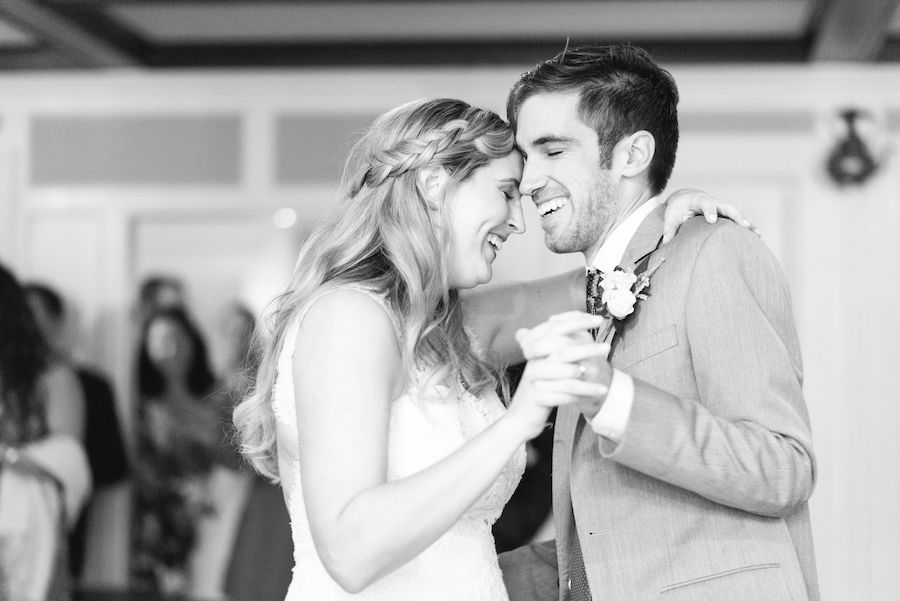 The couple had their first dance to “Dancing in the Moonlight,” by King Harvest. “I was quite anxious about being the center of attention and dancing in front of everyone, but it was really beautiful and such a special moment,” the bride says.