I Tried It: A Trampoline Barre Class at Barre Groove

Combining bounce, dance, and barre into one cardio-filled fitness class. 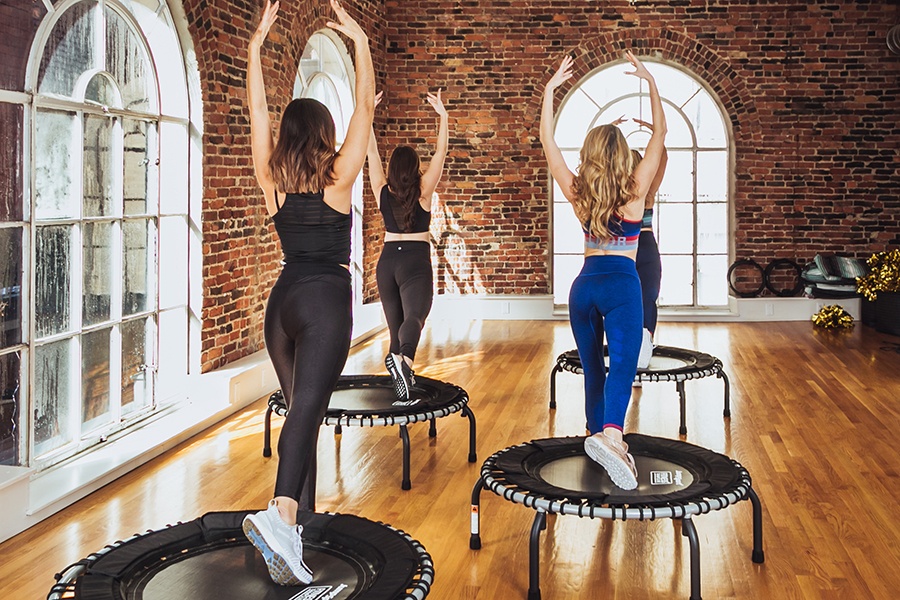 Barre, with its combination of Pilates, dance, yoga and functional training, has proved massively popular with Boston’s fitness-obsessed, with more than 11 gyms throughout the Boston area offering the classes. But as a committed non dancer (ie, the sort of kid who threw a fit after only three weeks of dance class), I’ve always been a bit hesitant about the whole concept. And the new barre class I’d decided to try isn’t your typical barre class: It’s done on a trampoline. Combining dance and bouncing up and down on an unstable surface? Seemed like a short path to a busted ankle for someone this rhythmically challenged. Still, I pride myself on my willingness to leave no stone unturned, fitness-wise, and decided to try it out. This is the only barre class of its kind in the city! I had to see what all the hype was about.

Barre Groove, located right off the northern end of the Common in a small studio with open brick walls, wooden paneled floors, and large sweeping windows, is Alanna Perry’s brainchild. She’s been teaching beat-driven and dance-inspired fitness classes since January. She says all four of her classes are designed to create seamless transitions and flow so you can easily get into the groove. Hence the names of all four of her methods: Barre Groove, Pom Groove, Total Groove, and Bounce Groove. Only Total Groove and Bounce Groove take place on a trampoline, and I was hoping to get a little taste of all three classes, so I signed up for the hybrid hour-long Total Groove class.

The former New England Patriots cheerleader was quick to make everyone in the class feel welcomed and at ease—explaining where to jump on the JumpSport trampolines, how to jump properly, and the choreography of each dance. Typically, the room’s temperature is cranked to 85 degrees, but seeing as the city was already in the midst of a heatwave, she let Mother Nature do her job. The class was small and intimate, but all 12 trampolines were full.

After we climbed onto the trampolines, we started warming up with some jumping. Perry cued us to drive into the trampoline with our heels, keeping our knees bent, and butt back. It was very different from just jumping for leisure on a backyard trampoline. You really had to focus on the movement while keeping your core engaged and chest up to stay with the beat of the song.

After we had more or less mastered jumping straight up and down on the beat, it was time to try something a little more complicated. Perry led us through two choreographed dances that had us doing leg kicks, spins, and throwing our hands in the air (like cheerleaders during a halftime show) while bouncing away. By the end of the song I had mastered it…more or less. I may or may not have been turned around in the wrong direction a couple times and by no means could I have done it on my own, but it was fun to move my body in ways I typically don’t. Plus, it helped to follow the girls in front of me and Perry a few trampolines away. After the bounce part of the class, we went into core work, utilizing the trampolines as a mat and leverage for crunches, dips, and plank holds.

When my core was sufficiently taxed and everything burned, Perry gleefully announced that it was time to lift the trampolines up on their sides and use the legs as support for barre. All the barre movements targeted the booty as we squeezed a tiny, inflatable ball between our thighs and leaned against the legs of the trampoline and performed tiny squats, pulses, and kick backs.

By this time, my legs were jello, but Perry had us hop back on the trampoline for another dance. This time, we were using weighted gold pom-poms, a Perry speciality. I don’t think I’ve ever held a pair of pom-poms in my entire life, let alone weighted ones. They couldn’t have weighed more than a pound each, but this time, I felt more confident and able to stay on the beat during the dance. Maybe it was the magic of the pom-poms, allowing me to truly embrace being a dancer for an hour, or maybe it was just because we were doing the same choreographed dance we had learned earlier. Either way, I’ll take the progress.

We finished the class out with a small arm circuit using three-pound weights while standing on the trampoline, followed by completing all the booty work we had previously done on our right side on our left side, and ended with a short cool-down.

Dance experience or no dance experience, this class was a blast, and not being able to stay on the beat provided for more laughs. Perry informed me after the class that 10 minutes of bouncing is the equivalent of one hour of running. I’m not sure if it’s true or not, but I’d like to believe so. I’d take up bouncing as my preferred method of cardio any day.