Owners of the new spin studio AXL, in East Boston, say it requires a lot of pivoting. 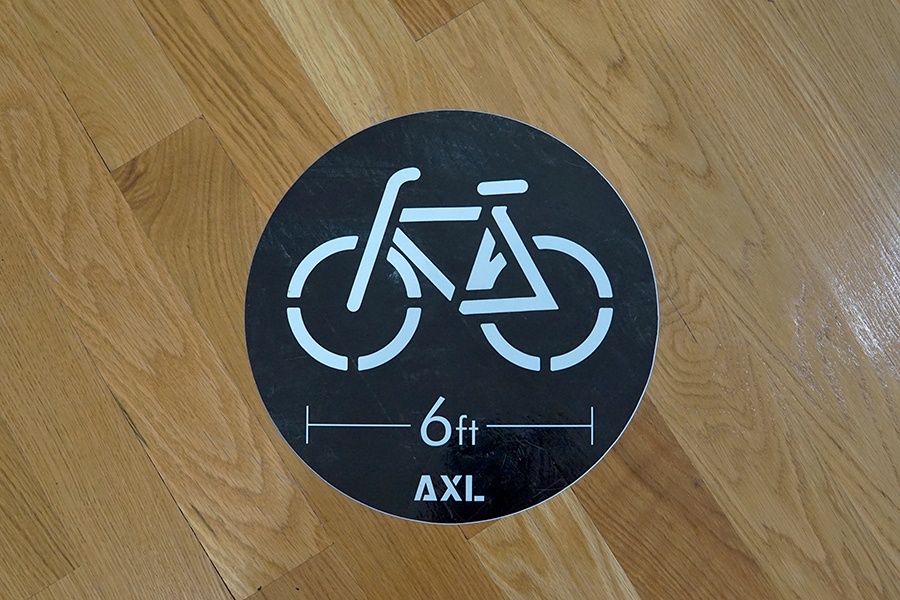 While existing gyms and fitness studios around the Boston area reconfigured their business models and existing protocols to meet the demands of the COVID pandemic, AXL—a new spin studio in East Boston—was facing a whole other dilemma. In other words: What do you do when your opening day was supposed to be two weeks after Gov. Baker’s state-wide shutdown went into effect? This was what owners Toby Boice and Sana Kapadia faced just minutes after lugging 28 80-pound bikes up to their brand new studio space in a third floor walk-up on Meridian Street in Eastie.

“I’ll never forget it,” Boice tells me over the phone. “We had just walked down the street to Cunard Tavern, completely exhausted after carrying every bike up to the studio, and watched as Governor Baker announced the shutdowns. It was a very terrifying moment.”

When I first caught up with the duo in mid-June, the regulations for phase three reopening were not set in place yet. But both Boice and Kapadia were positive and hopeful for their studios’ future.

“We had just made all these hefty purchases and we were left with no way to make actual revenue,” Kapadia says. But in just three days the spin studio pivoted and became a bike rental company. And guess what? Every last one of those 80-pound bikes got dragged back down the stairs to be rented into people’s homes temporarily. 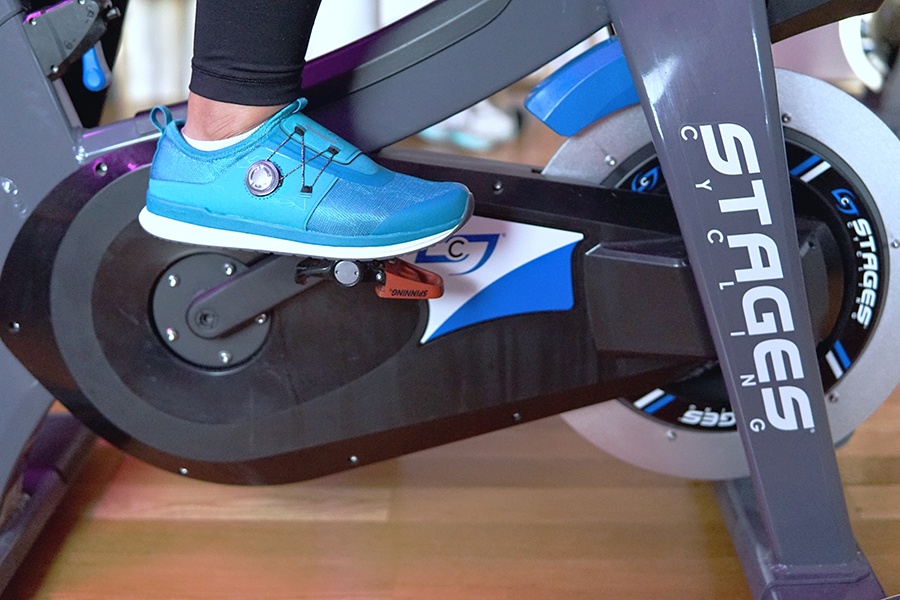 “This was a way for people to keep their sanity when the world went to hell around them,” Kapadia added. “They were incredibly grateful for the bike.” Plus, as one of the only spin studios in that part of town, people flocked from Revere, Chelsea, and Winthrop to get bikes and services from the boutique studio. Without direct competitors in the area, it seemed the spin studio already had a strong presence in the community. Which, given the circumstances, and lack of in-person presence, is pretty impressive.

They decided to rent the bikes to cover some costs (with the added assist that their landlord gave them some rent relief), and at $65/week (including shoes) the studio got by for a little while. With a waitlist for bike rental, the team was given a couple weeks to breathe and started producing live workout content.

In a few days, AXL had its own live streaming platform on Vimeo and Kapadia and Boice were absorbing every bit of information they could get on how to operate a safe business in the “COVID world.” They consulted other studios, public health experts, and took pointers from what was already happening in phase two.

“We’re being very proactive,” Kapadia told me in June. “We’re not waiting to let the government give us the bare minimum standards. We started asking ourselves: How do we create a sanctuary and a place for people to forget what’s going on out there?” They started crunching numbers and looking at ways to operate at 25 percent capacity, installing plexiglass barriers, and air purifying machines for their HVAC system.

Turns out, their preparation paid off, because come July 13, when gyms and fitness studios in Boston were given the green light to open their doors (at 40 percent capacity no less), AXL was prepared. On July 16 and 17, the team hosted a family and friends day to go through the motions and on the 18th, they were open for business.

When I caught up with Kapadia and Boice weeks after our initial conversation, they were nothing but happy with how things were going. “All we’ve been doing since the beginning is pivoting and diversifying our offerings,” Kapadia tells me. “We were honestly coming into all of this at the optimal time because we were a blank slate. We just wrote our process to match the city and state guidelines, while other studios had to push their re-opening back to change what they were previously doing.” 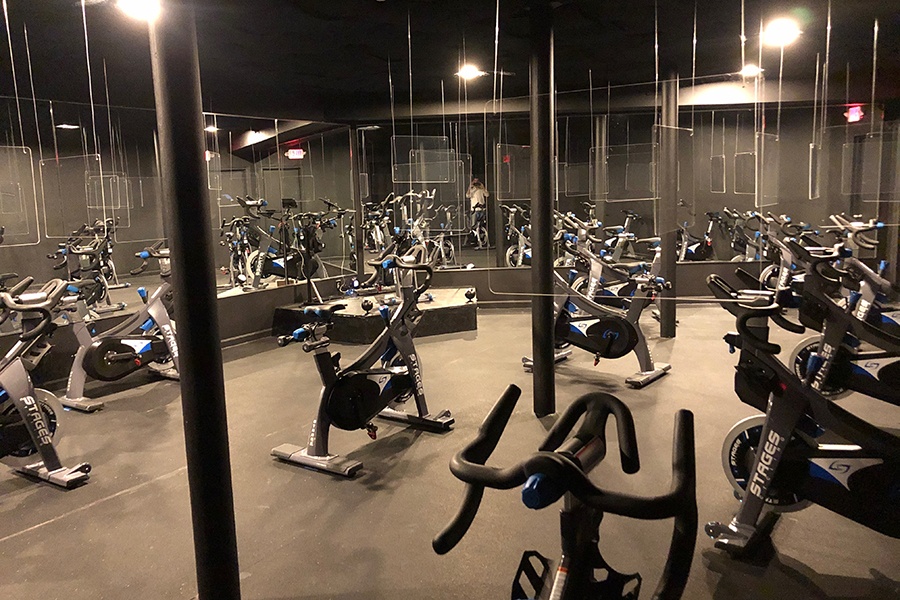 So, right now the studio is operating with 12 clients at a time in the studio. They are looking into spacing the bikes out even further, and only allowing six at a time, so participants don’t have to wear masks. The team is also starting to host outdoor rides in places like Pierce Park on the waterfront, starting July 25. “The outdoor rides are selling out within hours of posting them,” Kapadia says. “It’s been such a community effort.” The capacity for those classes ranges with where the park is and who it belongs to. In some places, they can have as many as 15 riders in a class.

And, as a little reminder of what the pre-COVID workout world was like, on August 1, the spin studio is partnering with Reel House to offer their first “Bike and Brunch.” At this time, it’s scheduled to be a private event for 12 people, but when Kapadia and Boice explained the event to me over the phone, I couldn’t help but smile, because it felt like a little sliver of hope—a bit of normalcy amongst the chaos. For AXL, uncertainty is all they’ve known, and perhaps, they’ll be better off for it. 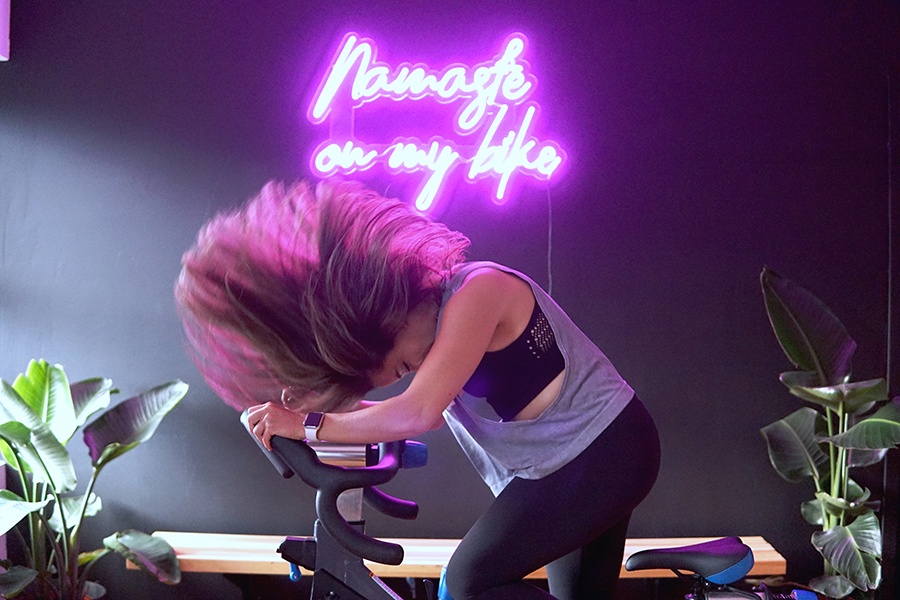 Instructor on a bike at AXL / Photo credit Adam Amundson