Wednesday Could Be the Coldest November 13 We’ve Ever Seen

A record nobody wanted to break. 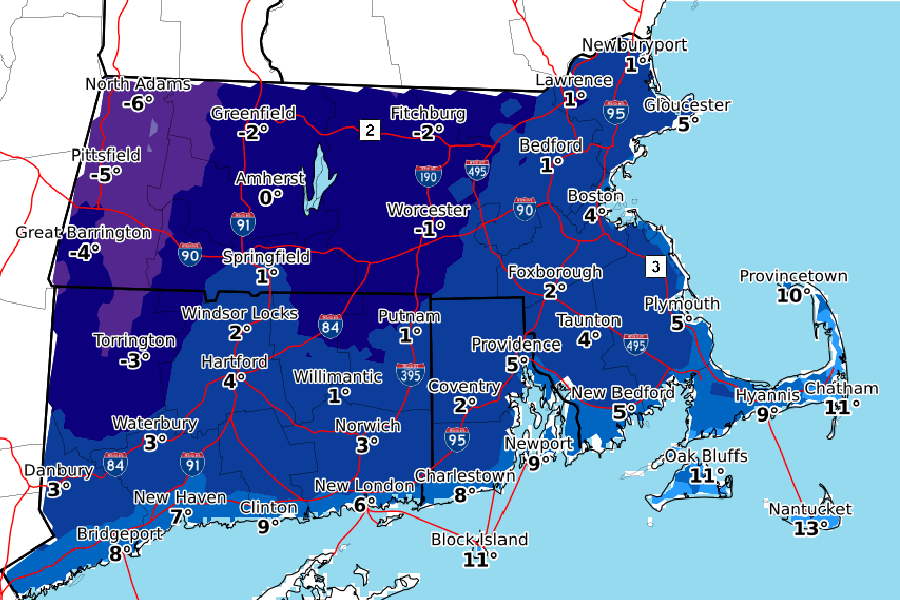 Stepping outside this morning might not have been so bad—but later this week, you’re going to want to make sure you bundle up to face the elements.

According to NWS Boston meteorologist Bill Simpson, Boston will see temperatures plummet to potentially record-breaking levels over the next 48 hours as a frontal system moves through, bringing Arctic air and wind. While it won’t be too cold for too long (temperatures are expected to even out and return to normal by Friday), the predictions for the next few days should definitely be taken seriously.

Tuesday morning, it’ll still feel pretty mild when you leave the house, with temperatures hovering in the mid to high 40s. However, Simpson predicts they’ll take a steep drop over the course of the day, reaching the mid-30s by early Tuesday afternoon and 25 by 9 p.m. Tuesday night. So, while your heavy coat might feel a little excessive when you venture out in the morning, you’re going to want it when you leave school or the office later in the day. Wednesday is predicted to be frigid all day long, with morning temperatures in the upper teens and low 20s and highs just barely reaching freezing.

The most significant part of this weather event? It’s not snow—while there may be a shower Tuesday afternoon or evening, no accumulation is expected. No, wind is the star of the show this time, with powerful gusts picking up Tuesday evening and lasting through Thursday morning. Wind chill readings Wednesday morning are predicted to be (yikes) in the single digits.

[Record Cold Tue Night & Wed] Northwest wind gusts of 25 to 40 mph will usher in record cold Tue night and Wed. Lows should be mainly in the teens to lower 20s. Highs Wed in the upper 20s and lower 30s. Wind chills between 5 below and 10 above late Tue night/Wed am. pic.twitter.com/P8JMthRAA9

If all goes as predicted Wednesday, it’ll be a November 13 for the record books. The record for low maximum temperature—that is, the lowest highest temperature within a 24 hour period—is 36, and Wednesday’s high will likely be lower than that, breaking a record that has stood since 1874. To put things into perspective, the last time a November 13 felt this cold, the Boston Red Stockings were fresh off a pennant win, Allston and Brighton had just been annexed, and Mayor Curley was still a week away from being born. It’ll be the coldest November 13 all living Bostonians have ever experienced, in other words—so please, honor the historic moment by finally replacing those gloves you lost last February.