Is Massachusetts Gearing up For a #MassExit?

Legal weed, sanctuary cities, and new proposals for safe injection sites are part of Massachusetts’ recent tradition of flouting federal law. Since when did we become a secessionist state? 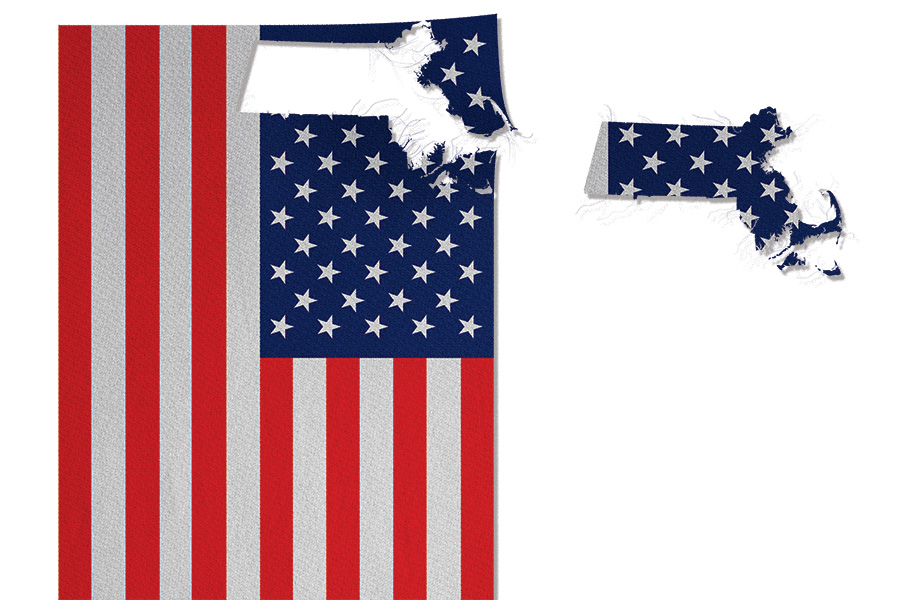 From Beacon Hill to city halls, local politicians are inching ever closer to launching the state’s first safe injection facilities (SIFs)—and in doing so, igniting a major showdown with the feds. Worn down by the mounting death toll of the opioid crisis, progressive pols and public health experts insist that giving people clean, medically supervised places to shoot up is about saving lives. Still, there are plenty of people in the state who think this is a terrible idea that will promote drugs and crime, including our governor, Charlie Baker, and U.S. Attorney Andrew Lelling, who has said that any attempts to open these facilities will be met with the full force of federal law.

But Massachusetts’ impending showdown with the U.S. government over SIFs is about a lot more than whether these facilities are a good idea: It’s about who gets to decide—us or Uncle Sam. While traditionally thought of as the domain of southern states, laws that fly in the face of the federal government have actually been part of the Bay State’s history for centuries, particularly when people’s well-being is on the line. And when we take bold first steps, they tend to cause dominoes to fall around the country, whether it’s pioneering healthcare reform or legalizing gay marriage.

“There is a strong tradition in Massachusetts of pushing the boundaries on federal law to respond to a public health crisis,” says state Senator Julian Cyr, a SIF advocate who cochairs the Joint Committee on Mental Health, Substance Use, and Recovery. “It’s sort of in our DNA.” We were the first state, for instance, to mandate vaccinations for schoolchildren, in 1855. Boston was the first city to launch a needle-exchange program at the height of the AIDS epidemic in the 1980s. And just this year, while the rest of the country wrung its hands over the vaping crisis, Baker went ahead and instituted an outright ban on e-cigs, which remain legal in 46 other states.

It’s not just in the realm of public health, though, where we have taken matters into our own hands in the face of federal opposition or inaction. Between the state’s sanctuary cities and DA Rachael Rollins’s lawsuit against the federal government that seeks to ban Immigration and Customs Enforcement agents from arresting people in our courtrooms, we’ve made life pretty difficult for ICE in Massachusetts. We were also one of the first states to legalize recreational marijuana.

Speaking of which, for all the tough talk in 2017 of federal crackdowns on pot shops, they never came. That’s why Leo Beletsky, a Northeastern law professor and member of the state’s Harm Reduction Commission, says it’s time to call Lelling’s bluff. “There’s a lot of saber rattling,” he says. But “Massachusetts cannot make public health policy based on politically guided statements from the federal government. It has to chart its own path.”

We seem to be doing just that: Two bills that would evaluate and regulate a possible SIF program are winding their way through the State House. The mayors of Somerville and Cambridge are publicly pondering opening their own sites. Buoying these efforts is a recent ruling in which a federal judge upheld the right of a nonprofit group to open a SIF in Philadelphia.

To be sure, there’s only so far this states’ rights crusade can go before it tears at the fabric of the union. And it’s also important to remember, before we get too gung ho, that it cuts both ways. After all, conservatives have long trotted out states’ rights to defend causes such as banning abortion and undermining Obamacare. That said, extreme times demand extreme measures. It would be a shame if we passed up our most recent opportunity to do something bold, innovative, and likely lifesaving, just because Washington doesn’t approve.