The Smoke Shop Opens This Week in Fort Point 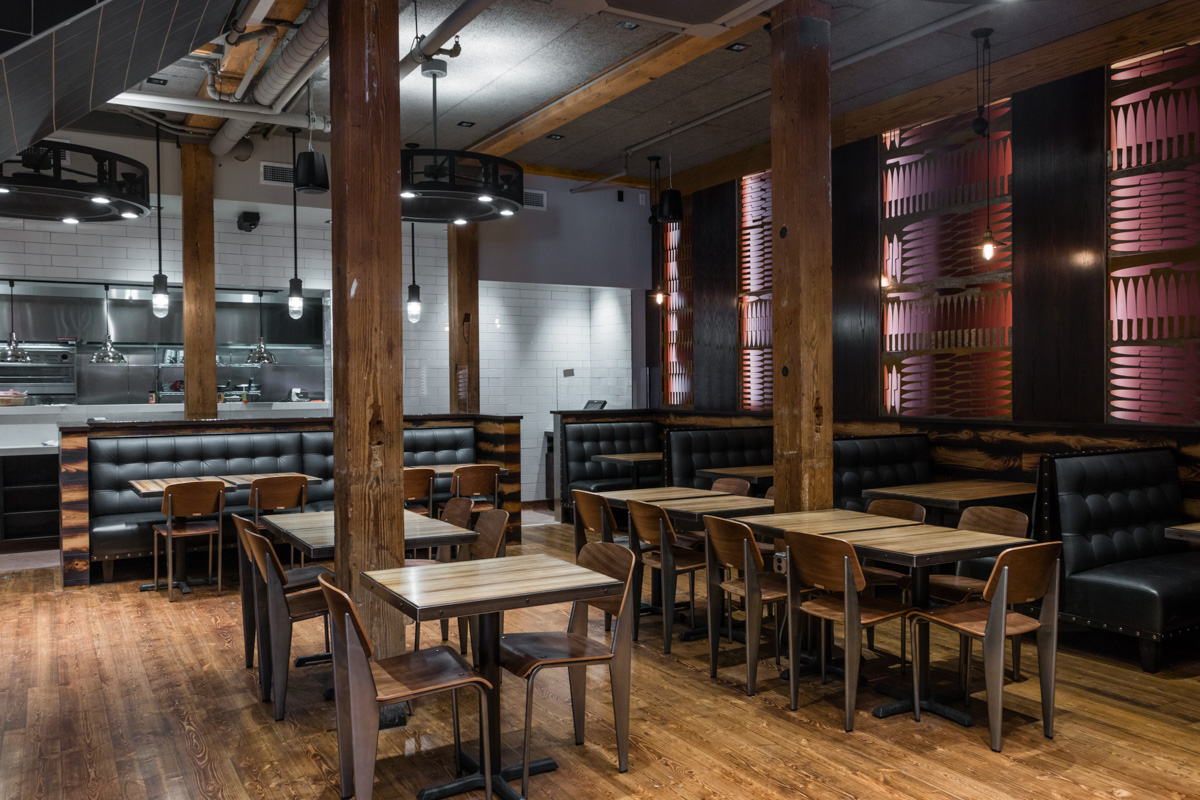 The dining room at Smoke Shop in Kendall Square, Cambridge. / Photo by Kelsey Cronin for “Here’s Your First Look at the Smoke Shop“

Chef Andy Husbands is keeping his word about a November debut for his second location of the Smoke Shop: The barbecue joint opens Wednesday, Nov. 29, in Fort Point.

The Seaport spot will feel like the Kendall Square original, with the same rustic-modern aesthetic from mixed woods and metals, the restaurant’s signature knife cut-out walls, and the chalkboard art of a butcher’s cuts of beef. This location seats 180, making it slightly larger than Cambridge’s 140 capacity. Fort Point offers a 16-person private dining room, as well.

The daily lunch and dinner menu offers the Smoke Shop favorites, like barbecue platters across a range of regional styles, Texas hot links and pimento cheese, the aptly named “best bar wings” (Author’s note: Also on the menu at the Rosebud, they really are my favorite), cornbread, and more.

Plus, Husbands promised “a few surprises… we think will be fun for that area:” Exclusive Fort Point menu items include Creole caramel, rosemary-sea salt, and other custom popcorn flavors; and rotating sandwich specials for the lunch crowd, like the Seaport hot chicken, and a Carolina Cubano.

Husbands, who’s been a passionate (and award-winning) pitmaster on the side of his restaurants career for nearly 30 years, has also proven proficient with sweets in Kendall Square (butter cake “crack,” anyone?). The new Smoke Shop has soft-serve ice cream and waffle bowls with various toppings.

The new bar boasts a similarly robust whiskey list as Cambridge’s, with more than 200 American whiskeys, plus Scotch and Japanese bottles. The Fort Point cocktail list will center on “old-timey” drinks, like Sazeracs and Sidecars, per today’s announcement. It will also have draft beer (and cider), something its predecessor, Tavern Road, did not offer. Expect local pints from Banded Horn Brewing, Revival, Jack’s Abby, and more.

The Smoke Shop does a bustling catering business, and that will continue for the Seaport area. The restaurant group is developing an online ordering system as well as an app, according to the press release. Takeout orders can be made by phone starting on day one.

Husbands, who also owns Tremont 647 and Sister Sorel in the South End, is in business with the prolific restaurateur Brian Lesser at the Smoke Shop. Lesser previously told Boston a third Smoke Shop location is headed for Somerville’s Assembly Row in spring 2018, and the company is “also looking into merchandising opportunities.”

Lesser was also a partner in Louis and Michael DiBiccari’s Tavern Road, and Husbands used the connection to move on the Fort Point space as soon as it became available.

“We honor and celebrate the heritage of barbecue, while adding our own modern twists, which makes The Smoke Shop brand really relate to the old-time, yet modern feel of the neighborhood,” he added in today’s press release. “With nothing like us in the area, we’re eager to show the Seaport district how we do BBQ.”

The Smoke Shop opens at 11 a.m. on Wednesday, and (most) every day thereafter.