Two years after it launched, Taste Wine Bar and Kitchen has its first executive chef—and upgraded menus perfect for pairing. 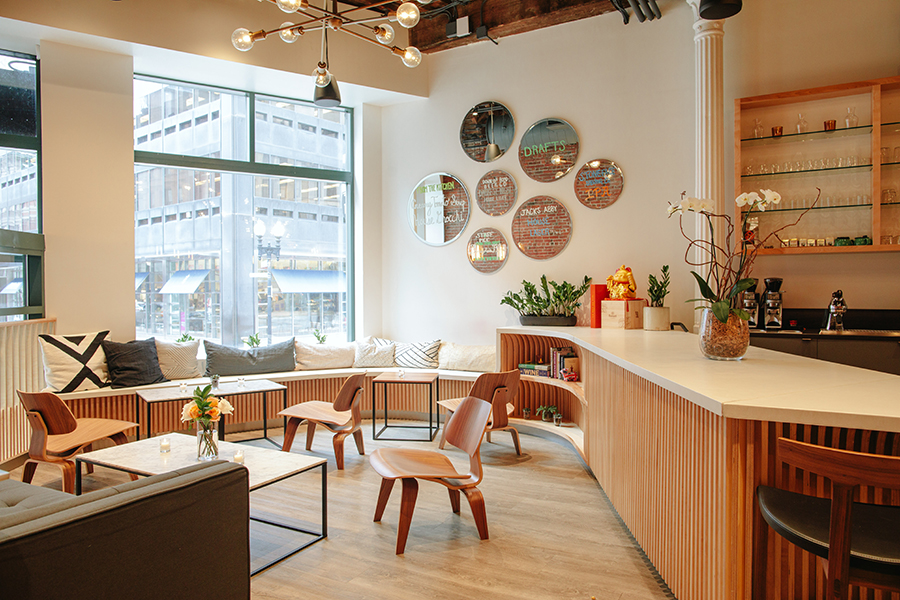 Now, Taste is “not just a wine bar, but a wine-focused restaurant,” Scott says. Her business model had already been successful in appealing to oenophiles: Wine lovers can try a glass at Taste, then bring home that very same bottle from Common Vines across the street. It’s a concept that helped Common Vines win a Best of Boston award in 2018. But Scott acknowledges that the wine bar’s opening food menu—a selection of simple pastries, cheese and charcuterie boards—really did feel like, well, Scott herself was merely setting out snacks for her friends.

“I treat it like my home. I want people to feel like that. It wasn’t until the night before we opened that I realized I was opening a restaurant,” Scott says. With Poll on board, “[we’re finally embracing] the restaurant side of it.”

Taste and Common Vines got their start after Scott and her husband, Chris Hsi, first moved to the Dewey Square area of downtown Boston in 2007. The couple would return home from their corporate-world work and want to have a glass of wine together. But their neighborhood—which sees most of its bustle during commuter hours—lacked the type of place they were craving. There wasn’t a casual wine bar where residents could unwind, nor even a shop where they could pick up a bottle to open themselves.

The two started a business plan for both ventures. After a grueling real estate search and the complicated navigation of Boston’s liquor license laws, Scott and Hsi opened Common Vines Wine Shop and Taste Wine Bar in 2017. The two storefronts are physically separate, but “we tried really hard to think of it as one concept,” Scott says. The shop had the elevated hospitality of a top-notch wine bar, while the bar itself felt less like a restaurant than someone’s living room.

With Poll in the kitchen, that is changing. The opening executive chef at Allston’s elevated Jewish deli, Our Fathers, Poll has also cooked at Boston’s Bar Boulud and the Mandarin Oriental, and acclaimed New York spots including Tom Colicchio’s Craft, Michael Solmonov’s Dizengoff, and Atrium DUMBO, where he staged with chef Derek Piva. Poll joined Taste Wine Bar about a month ago, and has already introduced substantial new lunch, dinner, and brunch menus.

He has also jumped in to to elevate the bar and shop’s popular events series—think: themed menus to match Taste’s regular bar takeovers by wine pros like Liz Vilardi (former owner of Belly Wine Bar and Central Bottle Wine Shop), and collaboration dinners with industry standouts like the team at Somerville’s Spoke Wine Bar, and NYC chef Yige Sun. 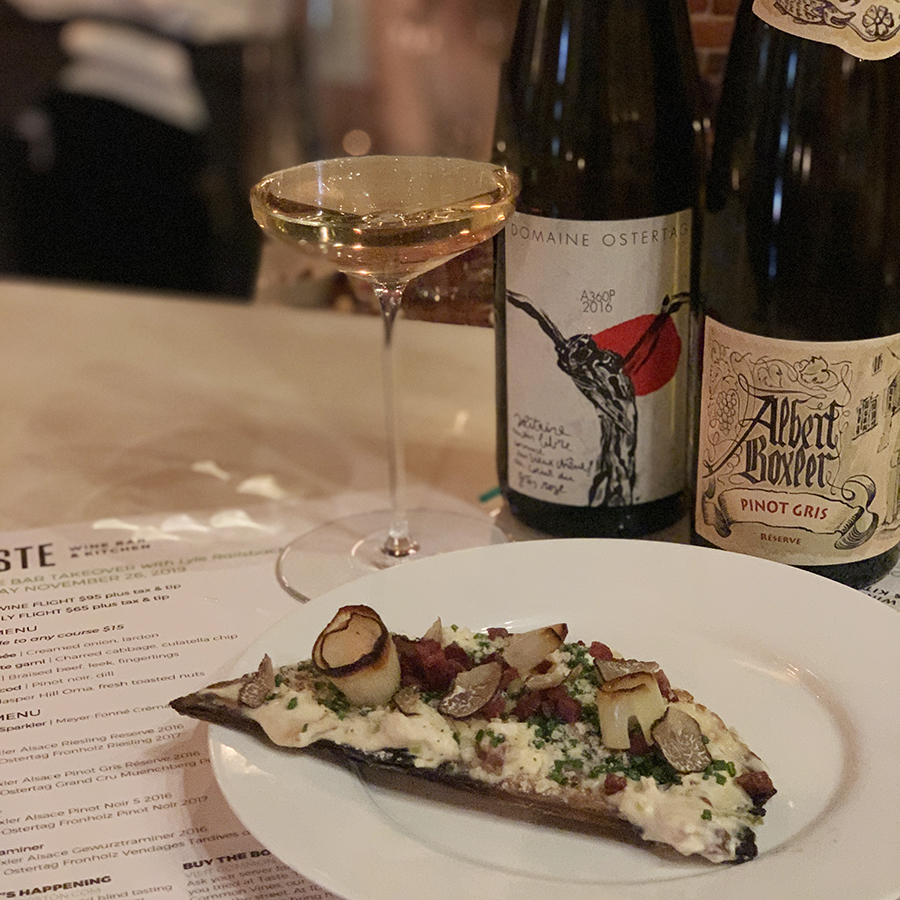 From a special menu created by chef Jameson Poll for an Alsatian wine dinner at Taste Wine Bar and Kitchen: Tart flambé with creamed onion and lardon. / Photo courtesy of Taste Wine Bar

Poll’s regular menus are printed daily, with subtle changes based on the ingredients on hand that day. They still include the bedrock of Taste’s original menu concept—snacks like ricotta toast, shishito peppers, and cheese and charcuterie boards—and they’re still executed on just a couple simple induction burners. But he’s added many new dishes, from crispy cauliflower with miso honey and cilantro, to Boston cream crêpes, and roasted chicken.

“There is a lot of creative freedom,” Poll says. “Nothing we do is too progressive, but we have a lot of diverse menus that showcase what the kitchen team is capable of in such a small space.”

The accidental restaurateur is happy to have Poll take the reins. The chef hired a few cooks he had worked with at other Boston restaurants, and Taste finally has a worthy kitchen crew in place to match Scott’s original vision, she says. Though it was a long time in the making, the timing couldn’t be better: Wine is having a real moment in New England right now, from the new guard of quirky, totally unpretentious bars around Boston like Haley.Henry and Rebel Rebel, to vanguard vineyards in Vermont. When Scott and Hsi first moved to downtown Boston, the Greenway hadn’t even bloomed yet, let alone Boston’s first pop-up wine bar that the public park hosted this past summer.

With Common Vines and Taste, “we were going for a way to build community,” Scott says, “both from a local perspective, for the people who live and work here, but in a bigger sense the wine and food community in Boston.”