Yes, someone came up with this. Yes, there's a recipe. Yes, you're bored enough. 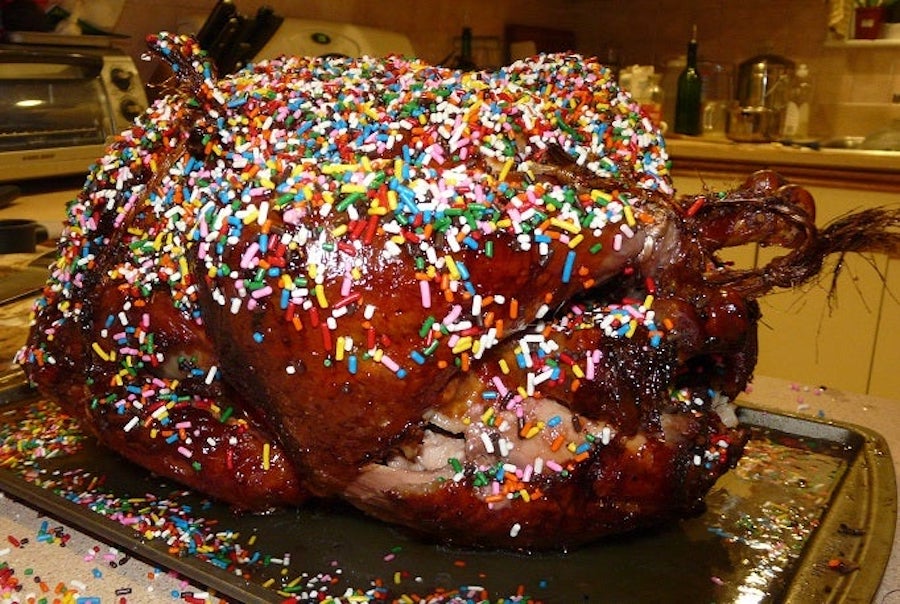 In a year filled with so much stress, division, and strife, it’s important this holiday season to focus on the things that unite us. Love of home and family, for instance, or the simple joy of receiving a thoughtful, handwritten card.

Something else we’re grateful for: the TurDunkin’, a Coolatta-brined turkey covered in confetti sprinkles that might be the most beautiful abomination any dyed-in-the-wool Masshole has ever seen. (A nauseating clam chowder popsicle, this is not.)

For this majestic creature we have to thank the brave, intrepid culinary pioneers at Unwholesome Foods, a blog filled with recipes for similarly spectacular travesties of nature (such as Velveeta-covered red velvet cake). The collection of epicurean experiments started years ago as a fun hobby among a few friends at MIT, according to co-creator and American hero Beth Baniszewski, and the TurDunkin’ simply came about when “we were looking for a reason to roast something.” They found it—oh, by jove, they found it.

In order to truss this turkey, the bird is soaked overnight in a bath of orange- and strawberry-flavored Coolattas. It is then stuffed with toasted Munchkins that have been sautéed with onion (fancy!), covered in a doughnut-inspired sugar glaze and sprinkles, and served with (what else?) coffee gravy made with Dunkin’ Original Blend. This is just as the Pilgrims would have wanted it, if the Pilgrims had all been named Sully and arrived to a Route 3 rest stop instead of Plymouth Rock.

How does it taste? “Pretty good! Sweet and sour in the right way,” says Baniszewski, now a Cambridge resident, though she will allow one regret. “In retrospect, we should have gone with a traditional red-eye gravy.” You live, you learn.

Although the TurDunkin’ is not exactly new (the Unwholesome Foods crew first posted the recipe in May 2010), Baniszewski says that, much to her pleasant surprise, its legacy lives on through occasional flare-ups of sharing on social media, especially around the holidays. (Shout-out to Eater Boston editor Rachel Leah Blumenthal and a couple former college classmates for bringing it to my feed’s attention this year.)

“Just today I saw two Facebook friends post it, not realizing that it came from me,” says the Julia Child of Coolattas, who would eventually parlay her genius into a career designing jet engines for GE Aviation. She also wound up marrying one of her Unwholesome Foods co-conspirators, Alex Khripin, who is now an advanced robotics engineer for Boston Dynamics. No, there was not TurDunkin’ at the wedding. Yes, I asked.

That said, if there is any justice in the world, the TurDunkin’ will one day take its place as the centerpiece to every American’s Thanksgiving table, or at least every American to whom the phrase “I’ll have it medium regulah” has deep and significant meaning. (We already know one person who would surely endorse the idea.)

When you think about it, 2020 might finally be the TurDunkin’s time to shine. After all, folks spending Thanksgiving in isolation will need a way to occupy their minds and idle hands; why not use them to transform a Butterball into the best worst decision you’ve ever made?

On that note, I’m goin’ on a Dunkies run. Anyone want?