Restaurant Review: Atlántico Is a Good Restaurant with Just One Small Catch

An unlikely rule of thumb for landing a stellar meal at Atlántico, the South End’s new(ish) seafood-focused tapas spot: Skip the tapas. 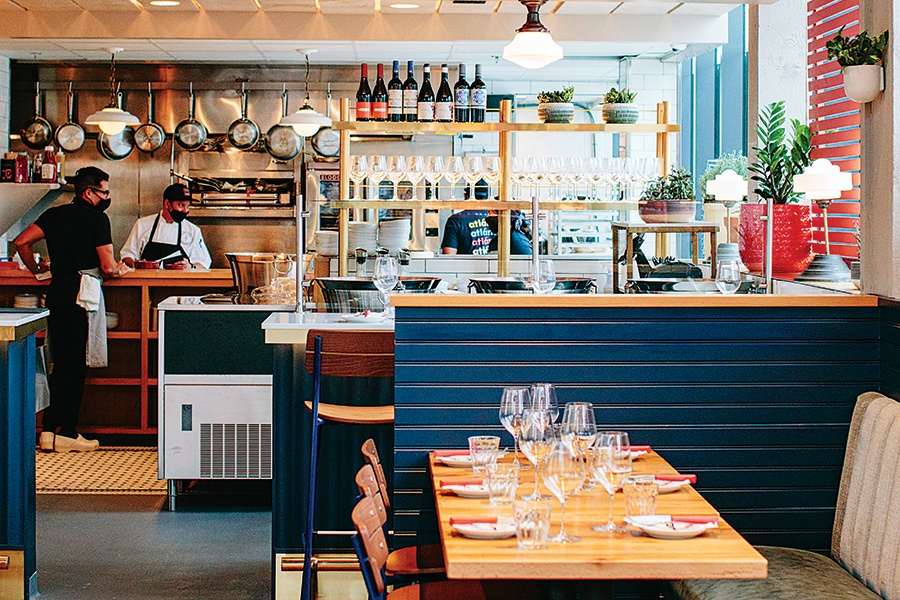 Michael Serpa’s tapas place in the South End isn’t a bad restaurant. It’s a good restaurant with some food problems. And if that last sentence strikes you as uncomfortably tone-deaf, well, welcome to 2021.

When the COVID nightmare began circa March last year—those grim early days when slathering Lysol onto doorknobs and grocery bags was our best-guess defense and the restaurant world’s fate hung in the balance—magazine and newspaper food critics pretty unanimously concluded that maybe kvetching over dry chicken or half-baked service was, if not straight-up cruel, at least a woefully bad reading of the room. Some publications suspended star ratings; others scrapped reviews indefinitely. At Boston, we back-benched this column for what ended up being more than a year, instead emphasizing our dining coverage online: curbside-takeout guides and essays urging intrepid diners to tip big and play nice.

It was weird territory—at the end of the day, a critic’s allegiance is to the readers considering how to spend their hard-earned dining dollars, not the businesses taking their money—but so, too, were the times. It just felt like the right thing to do.

Until, that is, it didn’t. As restaurants started to come back, with dining rooms at substantial capacity, restaurant reviews did as well. And things became a whole lot murkier. The day my editor called me to kick the tires on how best to relaunch, I was feeling annoyed at the overly cautious efforts of some of the critics I follow, not to mention antsy to get back in the game myself. Hold off on stars? Reconsider the format? “Naw, let’s just go for it,” I urged. By the end of the conversation, the game plan was to proceed as usual, with two important tweaks: I’d go easy on any pandemic-related hiccups—especially service glitches stemming from chronic understaffing that didn’t affect the meal in a big way—and we’d gravitate at first to restaurants we thought we might like.

“Got someplace in mind?” my editor asked.

“You bet,” I said. “Serpa’s got this new tapas place in the South End,” I soft-pedaled, before going in for the kill. “And the theme…is seafood.” 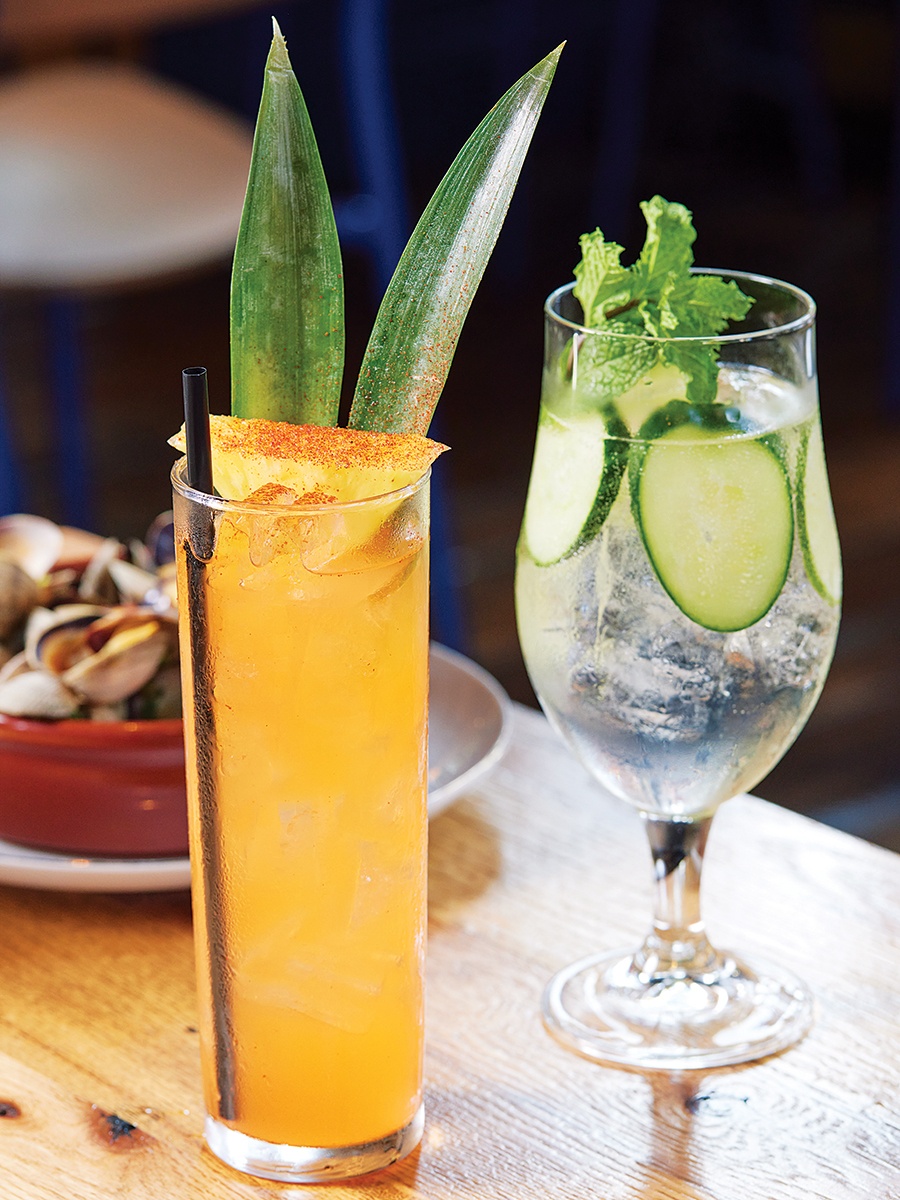 Next-level cocktails, including the Tulum and the Aberdeen, with petite -clams photobomb. / Photo by Brian Samuels

Even if Serpa’s name doesn’t ring a bell, you no doubt know his work. His eight-year stint running Neptune Oyster put the seafood spot and its genre-defining lobster rolls on the national map. His first solo place, a sliver of a Back Bay seafood counter called Select Oyster Bar, has been a Best of Boston fixture since 2015. A personal favorite for its world-class crudos, flawless shellfish handling, and baller French whites, it’s my go-to for taking New Yorkers as a gentle eff-you whenever they breeze into town hungry for “something seafood?” like they’re slumming it in some podunk fishing village where it’s the only thing decent.

Hence my optimism the first time I strolled into Atlántico one sunny afternoon in mid-May. The restaurant, which occupies the modern, light-flooded space off the stylish Girard residential building on Harrison (formerly Southern Proper), felt even airier than usual, its double-high windows flung open to let in the breeze. That trademark Serpian energy enveloped me the moment I stepped foot in the place: the thrum of well-trained servers zipping by, efficiently dispatching and retrieving plates, and the clickety-clack precision of cocktails being shaken or stirred. My favorite, the tequila-based Tulum ($15), deployed bell pepper to pull pineapple juice and grapefruity Aperol into wild new directions. The wine list, too, was a dream, brimming with off-the-beaten-path Spanish and Portuguese bottlings at every price point. So far, so great.

Then the food started coming out—which is when things began to get wonky. Pan con tomate ($8), the classic Spanish garlicky tomato bread, came on pressed toast so dense it was nearly unchewable. (My guess? The Iggy’s bread the kitchen uses has too developed a crust for this particular application.) House-poached ventresca tuna ($12), so velvety and tender when you splurge for it in the imported tins, was overcooked and chalky. Salt-cod croquetas ($12), tortilla Espanola ($9), the $65 seafood paella we dutifully allowed 30 minutes for: too lumpy, too diner-omelet-y, too bottom-crust-less—and frankly, too close to Toro, a 10-minute walk away.

Panicked, I texted my editor: Serpa just needed more time, I predicted, and either way, it wasn’t the note on which we wanted to launch our pandemic-era dining reviews. We quickly pivoted to another restaurant and kicked the can down the road on Atlántico. 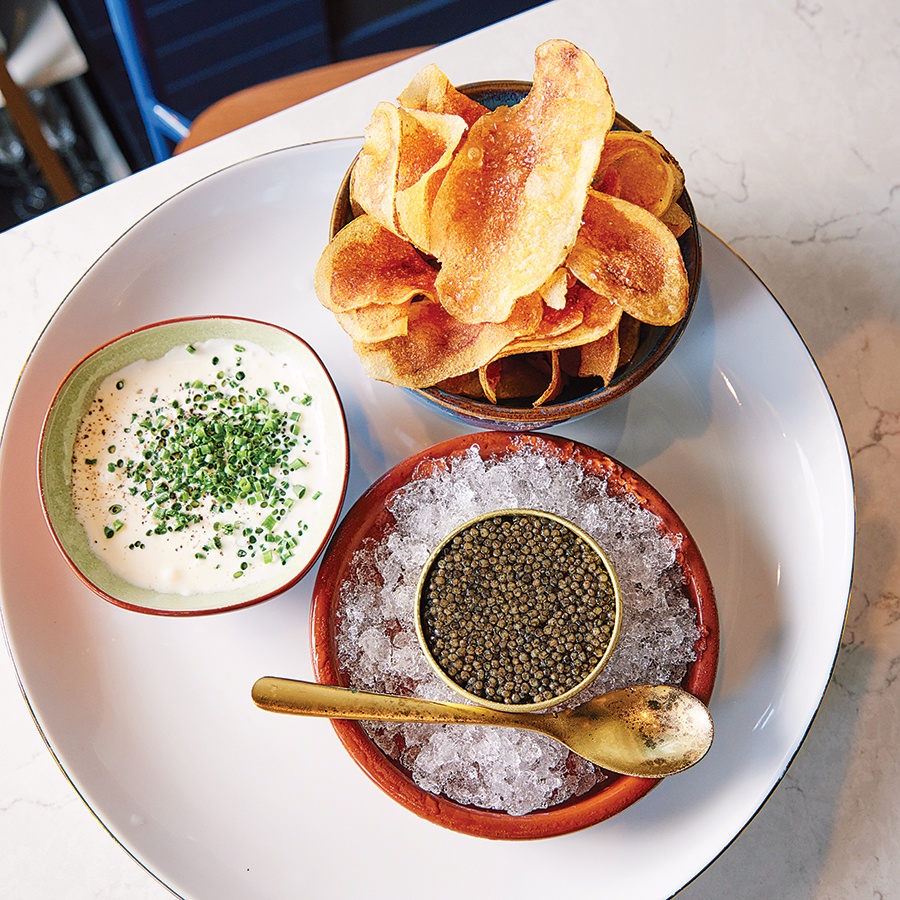 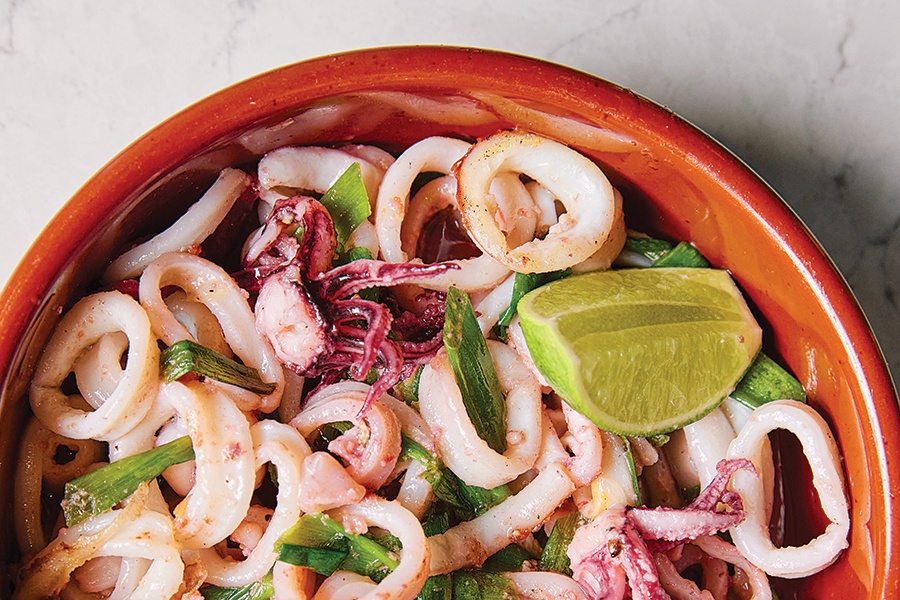 Two months later, with Atlántico locked in for the October issue come hell or high water, I headed back for a re-check, hoping things had changed. Much to my dismay, I found the needle hadn’t moved much on the wobbly dishes from my last visit. Dammit. Was I really gonna have to be the guy who panned a restaurant during COVID?

If I had to be the bearer of bad news, I thought, the least I could do was come up with a useful treasure map, with minefields to avoid along the way. So I visited again. And then again. The mission became an obsession. Between May and August, I dined at Atlántico six times and got through nearly the entire 40-plus-item menu. As I ruthlessly catalogued winners and wobblers, a pattern began to emerge. One that was far too clean, not to mention far too wacky, to be real. It couldn’t actually be that easy. Wait, could it?

If my taste buds are correct, the simple rule of thumb to follow to have a four-star meal at Atlántico is to skip any dish that would be recognizable as part of a tapas hit parade—basically, those that would rank as top 10 answers on a Family Feud survey—and focus instead on the other ones. Which at the end of the day isn’t that limiting here: You have 30 items left from which to choose. We’ll try a few rounds together, and then you’re on your own.

First up is the flash-grilled hamachi crudo ($21) garnished with peaches and manzanilla sherry to offset the smoky exterior. Ho-hum Tapas Core or Something More? File it under the latter; I already mentioned Serpa’s the best crudo guy in the biz. Something More, for the win. It was off-the-charts good. Get that crudo. Get all the crudos.

White sturgeon caviar ($75) with crème fraîche and house-made chips? That’s not Core. Get it, if you’re feeling splurgy. Grilled braised beef tongue ($9) with pickled onions? Core…skip. Sautéed petite clams ($17) with toasted garlic and chorizo? A tricky one: Core-ish, but still earns a thumbs-up. Seared squid ($16) with lime, scallions, and black pepper? The Asian-leaning flavors are a dead giveaway: decidedly Non-Core. And the list goes on.

I don’t mean to sound flip about a kitchen that struggles to nail a quarter of its menu—but at the end of the day, I have no doubt in my mind that Serpa will iron out the kinks. He’s too much of a perfectionist not to. Until then, my advice: Treat it like “Select South End,” and order accordingly.