When you’re craving tortelli in Southie, ravioli in Eastie, or mafaldine in the Back Bay, here’s where to go.

Long and flat, short and textured, twisted and turned into elbows or corkscrews—whatever your preferred shape, pasta is always undeniably delicious. But where to find the best in Boston? Sure, the North End is a prime destination for fork-twirled masterpieces, but if you are looking for the top spots there, you’ll already find our comprehensive guide right here.

The rest of the city is also full of all-time favorite places for fine, fresh pasta, so we’ve pulled together the non-North End standouts serving every size, shape, and sauce-topped variety you could ever want. If you’re lucky, and score the right seat, you might even be able to watch the pasta-making magic happen right before your eyes. Or you might be too busy digging into your carbonara to care—quel che sarà sarà. 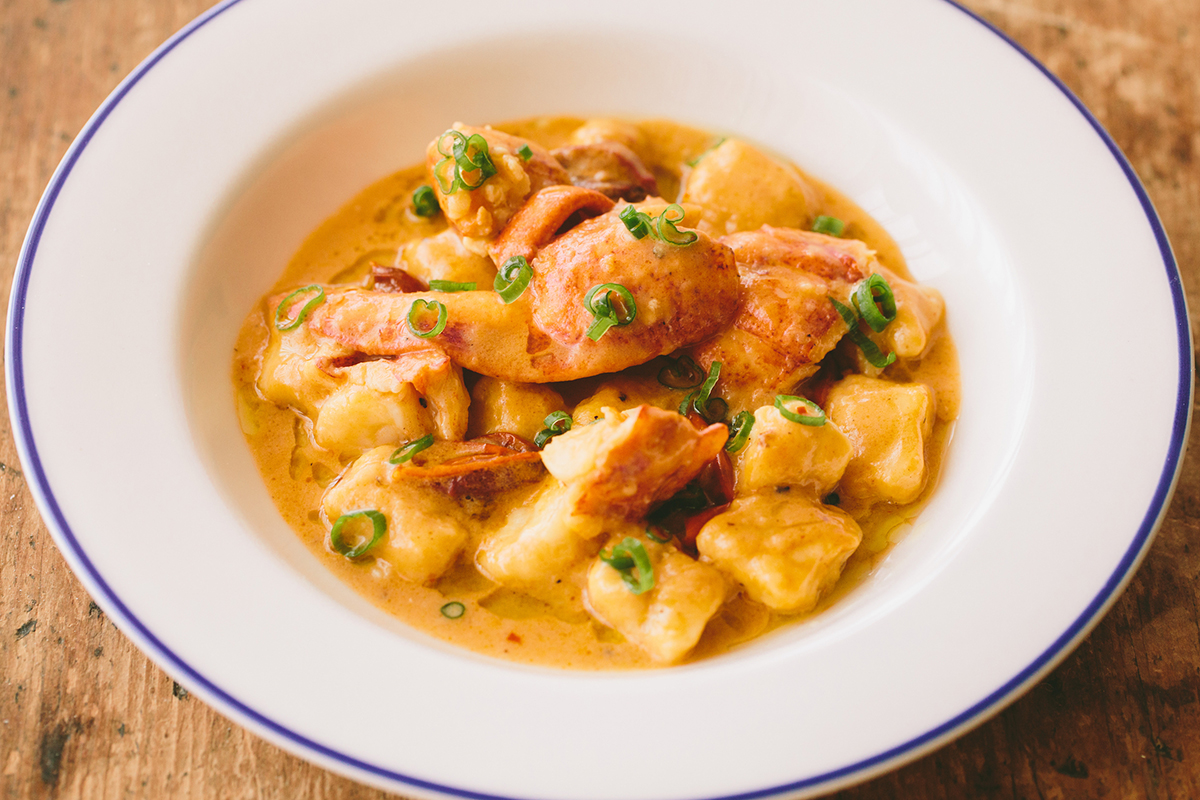 Lobster gnocchi is among the pasta dishes you might find on the menu at Bar Mezzana. / Photo by Brian Samuels

Picture this: the taste of an Aperol spritz lingers on your lips as the light sea breeze of the Mediterranean tickles your skin. In front of you sits a gorgeous plate of paccheri piled high with lobster and creamy tomatoes. Oh wait, hold on: That Aperol spirtz is still in your hand, but the breeze is just a pleasant bonus that comes with the patio-dining experience at Bar Mezzana in Boston’s South End. On one hand, chef Colin Lynch serves the kind of coastal Italian fare that makes you want to book a ticket to Capri and never look back—but then again, ditching Boston would mean leaving behind his superlative house-made pastas that range from a delicate ravioli con uovo to an aromatic orecchiete with fennel and sausage. On second thought, we’ll take another spritz and make a toast to la dolce vita right here. 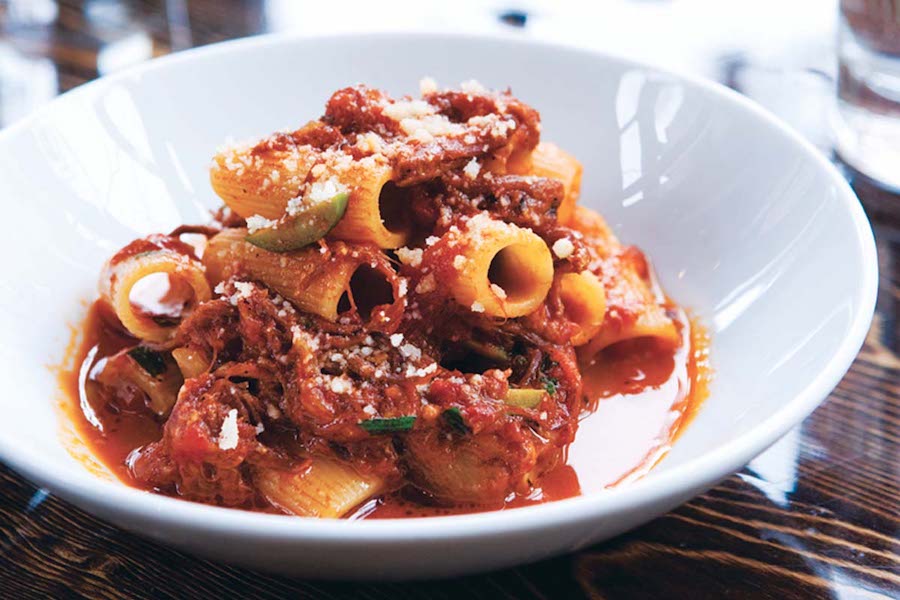 For over a decade, this South End enoteca has been dishing out delicious, seasonal small plates. There’s big flavor, though, packed into every portion of handmade pastas at this popular gathering spot. After all, Jamie Bissonnette and Ken Oringer, the James Beard award-winning chefs behind this neighborhood fixture (as well as nearby Toro and Cambridge’s Little Donkey) certainly know how to please crowds with their fresh takes on Italian classics. How about some sea urchin with your spaghetti carbonara? Or decadent layers of red wine-poached bone marrow in your lasagna, perhaps? It’s time to gather the whole famiglia to divide and conquer this entire menu. 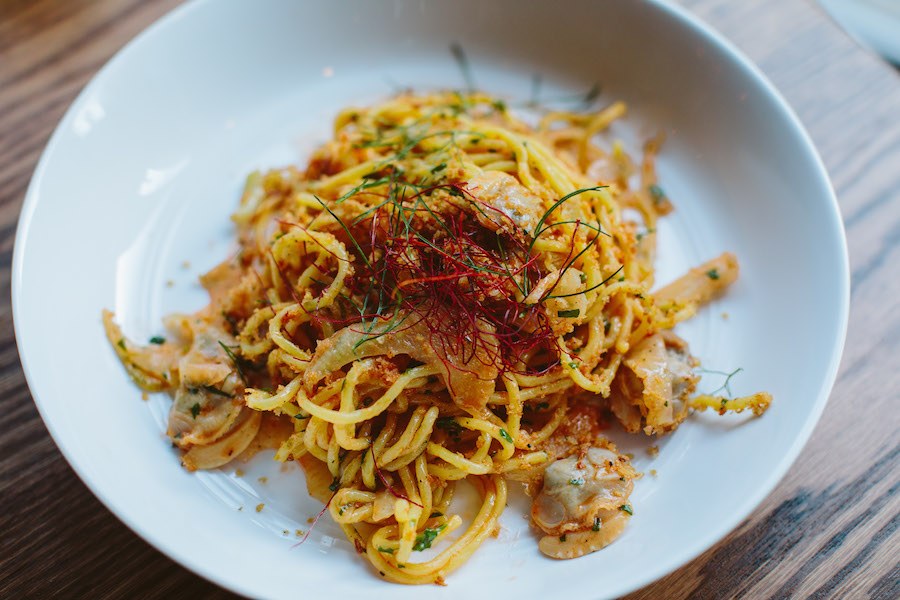 After doing some field research in Modena, Italy for over a year, James Beard Award-winning chef Karen Akunowicz returned to the states with a fresh perspective and exceptional pasta making skills. While Akunowicz’s menu dabbles in the cuisines of some of Italy’s finest dining capitals, we recommend taking a trip to the Southern region with her braised duck cavatelli with smoked cinnamon and chives. Looking for something on the lighter side? First of all, good luck—Fox & the Knife does not play around when it comes to layering on the butter, cheese, and wild game, so prepare accordingly. That said, the delicate tortelli verde with wild nettles and English peas is a relatively light and springy stunner. 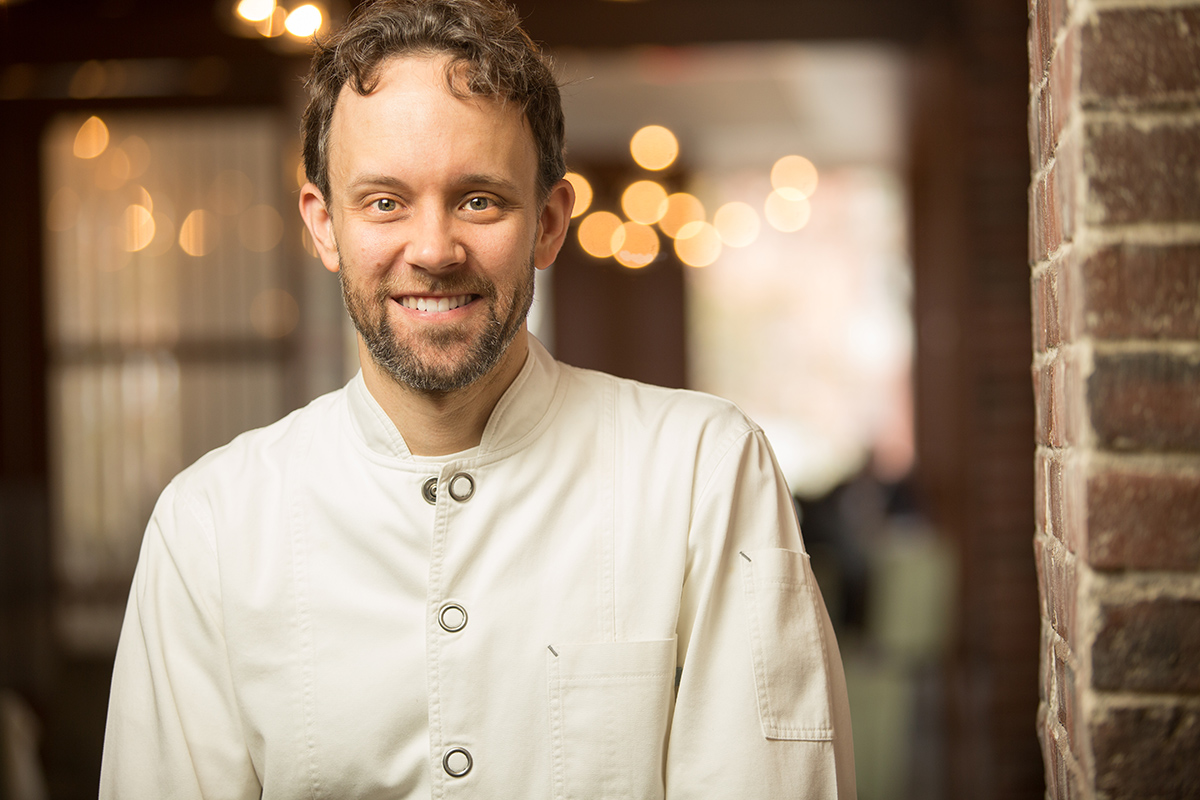 Alas, it turns out that its sibling restaurant Benedetto won’t be reopening in Harvard Square—but if you need to book a table at a romantic little Italian place in Cambridge, Giulia still fits the bill. With its exposed brick walls, candlelit tables, and sweet handmade table runners, this classic trattoria screams date-night material. Add in some truly exceptional pasta dishes made with mostly local ingredients, and that’s when the night really gets interesting. While the delightfully silky spelt fazzoletti with ramp pesto should not be missed, the wild boar pappardelle is a real knock-out – just like your date, of course. 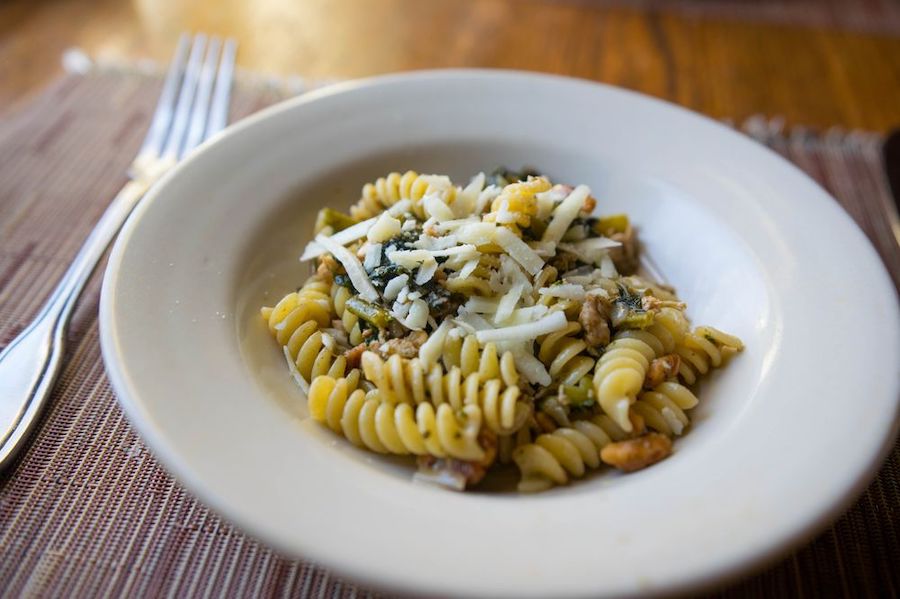 Fettucelle with chicken at La Morra. / Photo by Dan J. via Yelp

After spending a year in the Piedmont region of Italy cooking local classics and tasting wines, husband-and-wife duo Josh and Jen Zizkin came back to the states to open their beloved La Morra over 15 years ago. Since then, the Brookline eatery, named for the hilltop where the couple had lived in Barolo, has built up a strong reputation for culinary excellence and wine expertise. Chef Josh’s cadre of fresh pasta dishes ranges from extremely decadent lamb cannelloni with bechamel sauce to fresh and springy cavatelli tossed with ramp pesto, vegetables, and cherry tomatoes. Pair your plate with a bottle of red from Jen’s thoughtfully curated wine menu and settle in for a meal in a low-lit, brick-covered space you certainly won’t forget. 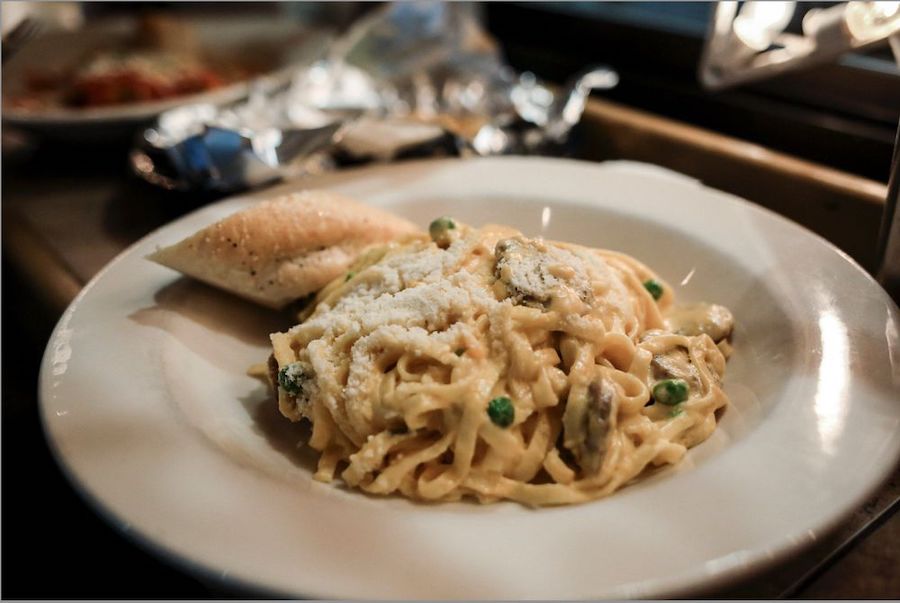 If you’re looking for pasta that seems straight from nonna’s kitchen, Lilly’s has got the old-school techniques and cozy atmosphere to make you feel right at home. The namesake matriarch, a Milan native, set up her Tremont Street shop in the ’90s after moving to the states and first opening a full-fledged pasta factory in Everett. Now devoted fans and curious newcomers alike flock to Lilly’s on Mission Hill to try her signature, surprisingly healthy pastas made with pure semolina durum wheat. If you’re too overwhelmed by the endless possibilities presented by the build-your-own menu of pastas, sauces, and toppings, try one of the best-selling dishes, such as lobster ravioli with pink cream sauce or Cajun fettuccine. Talk about some good carbs. 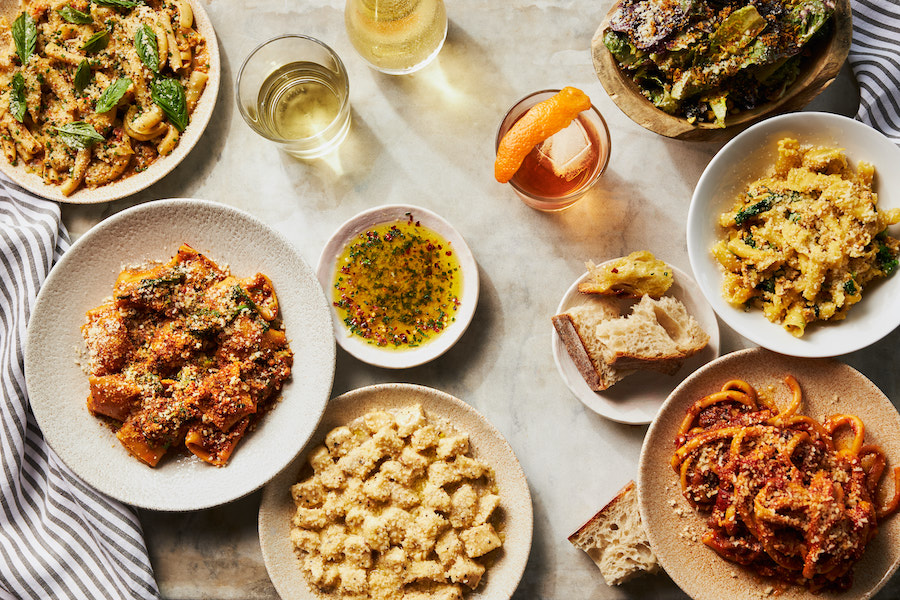 Though Food & Wine recently anointed him one of the country’s Best New Chefs, Douglass Williams already has quite a career under his belt. For starters, he spent a year under the wing of Jamie Bissonnette at Coppa, where he worked as a pasta cook when the Boston enoteca opened in 2010. After learning how to knead rice dough in southern Thailand, make stuffed culurgiones in Sardinia, and a couple gigs at Michelin-starred spots in New York and Paris, Williams eventually returned to Boston to open up his very own trattoria in the South End. With a robust pasta menu featuring familiar favorites (like carbonara) as well as twists on tradition (say, the gnocchi-based cacio e pepe), Williams has crafted something inimitably his own. Oh, and if you’re in the mood for a full-blown feast, head to MIDA on Mondays for the Mangia Pasta special: five different pasta plates paired with salad and bread. 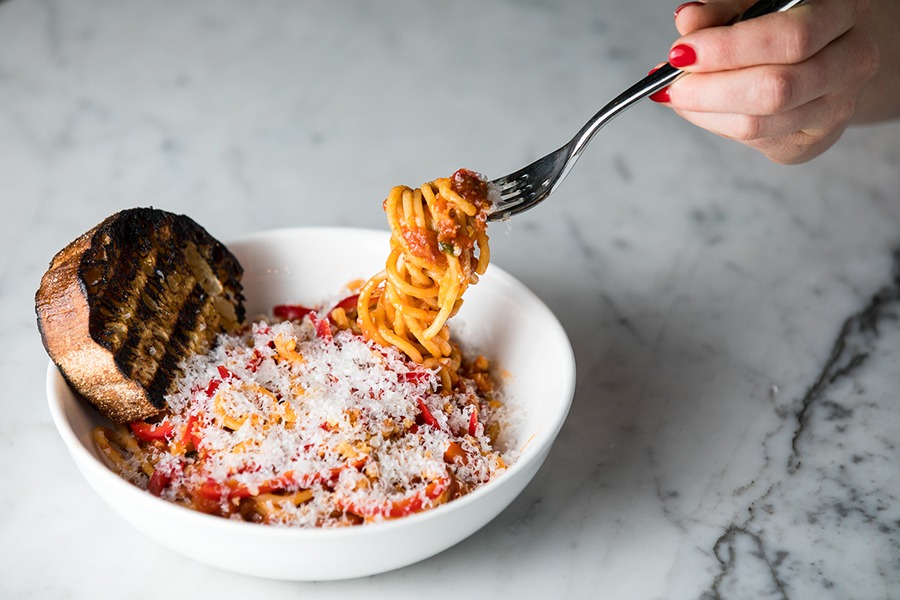 The old saying goes that you eat with your eyes first. Still, if the Oscar-worthy short film on the Pammy’s website does not convince you of chef Chris Willis’s pasta-making prowess, you can always taste-test the claim yourself. You’ll need to select three dishes from the a-la-carte tasting menu anyway, so go ahead: Order a trio of pastas for the investigation. No one will judge you, and the waiter will most likely commend you for taking on lumache bolognese, ricotta raviolette, and cavatappi with ricotta in one sitting. In the end, you’ll find that Willis lives up to the hype, and besides, Pammy’s charming interior—a setup filled with vintage light fixtures, plants, and a grand white ceramic tile fireplace—is already enough to make any on-trend millennial salivate. 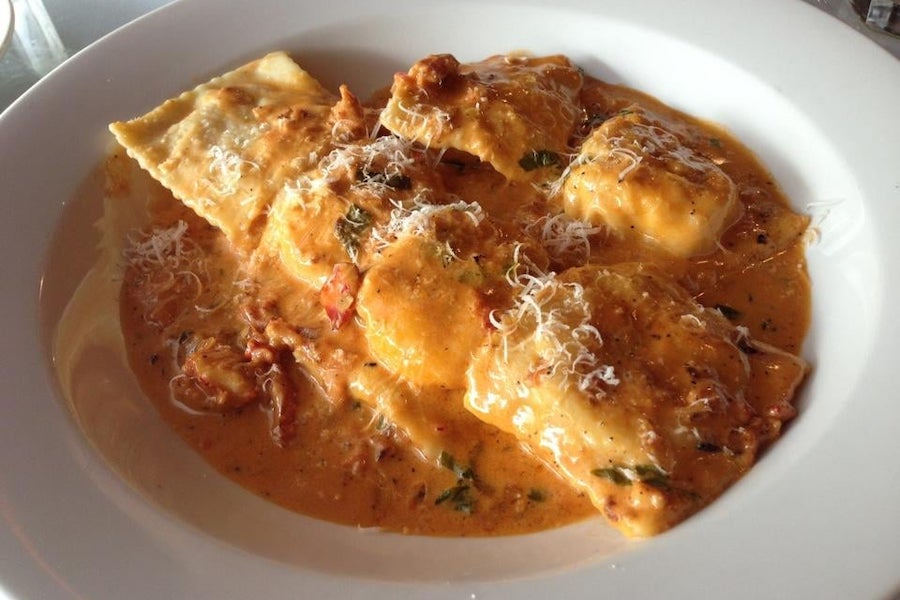 To East Boston residents and fans of Guy Fieri, Rino’s is nothing less than a landmark. What the place lacks in contemporary décor and size capacity, it makes up for in punchy flavors and impossibly generous portions. The reasonably priced joint offers every pasta and sauce combination under the Tuscan sun without sacrificing quality, and though servers will happily guide you through the list of fresh fettucine, gnocchi, and other offerings made in-house daily, know that you can never go wrong with Rino’s signature lobster ravioli. Just be sure to beat the rush and get there early, or you might get stuck waiting to score a table in the intimate establishment. It’s definitely worth your while, and you’ll most likely leave with three meals’ worth of leftovers.

This swanky spot in Copley Square from chef-owner Jamie Mammano of Mistral and Teatro fame is exactly where you want to be seen dining on ruffled ribbons of mafaldine with “exotic” mushrooms. Despite the chic décor and sophisticated air in the room, Sorellina’s farm-to-table philosophy and focus on seasonal ingredients keeps its pasta dishes down to earth. Take the potato gnocchi with Maine lobster and Vermont butter, for example, which marries the bounty of New England to an Italian-Mediterranean sensibility. Bring an empty stomach, and a full wallet. 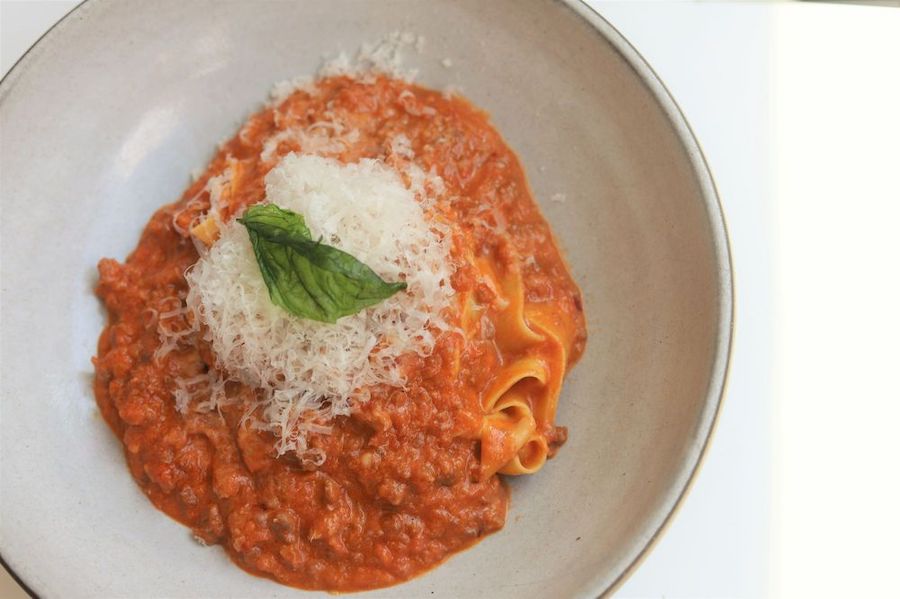 Tagliatelle at Sportello. / Photo by Kota O. via Yelp

This sleek yet casual Italian diner from restauranter Barbara Lynch offers up some of Boston’s most inventive and delectable takes on classic trattoria-inspired cuisine. In particular, Lynch’s wide assortment of handmade pasta, made fresh daily, satisfies in every form—from long, luscious tagliatelle to plush and chewy strozzapreti tubes. Be sure to grab a front row seat at the wrap-around counter, where you can watch garganelli be gently rolled on a pettine pasta board throughout your meal. Cue the oohs and ahhs. 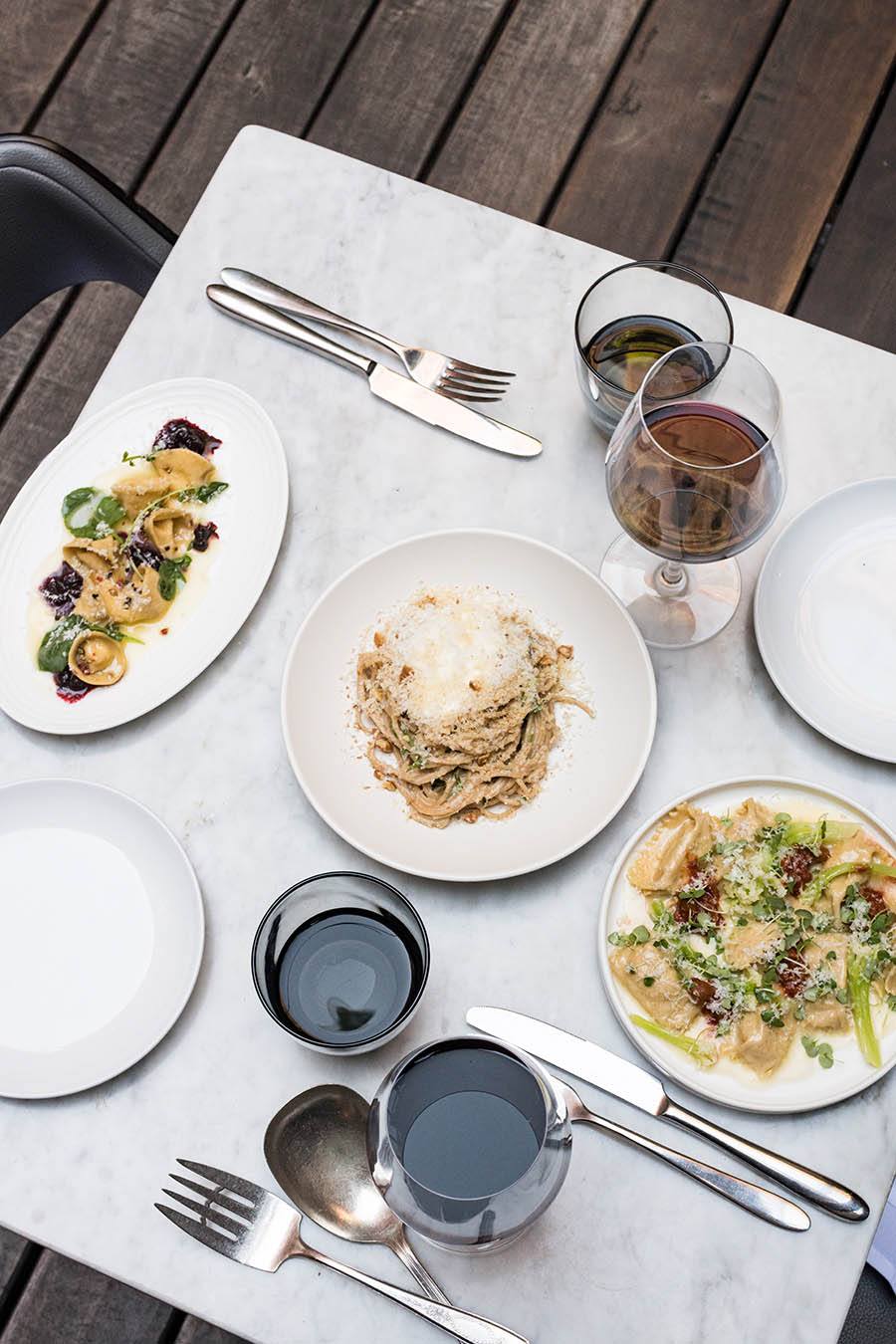 There may not be any gondolas or picturesque canals in sight, but there are plenty of stunning, historic brownstones surrounding this Venetian-inspired bacaro and wine bar in the South End. SRV, which stands for Serene Republic of Venice, specializes in cicchetti (small bites)—more specifically, though, you’re really here for the grani (grains). Using house-milled flour and expert-level pasta making techniques, chef Michael Lombardi will transport your taste buds to the Venetian Lagoon in no time. With choices like rigatoni with rabbit and girelle topped with duck sugo, you’ll want to float every option on the menu. 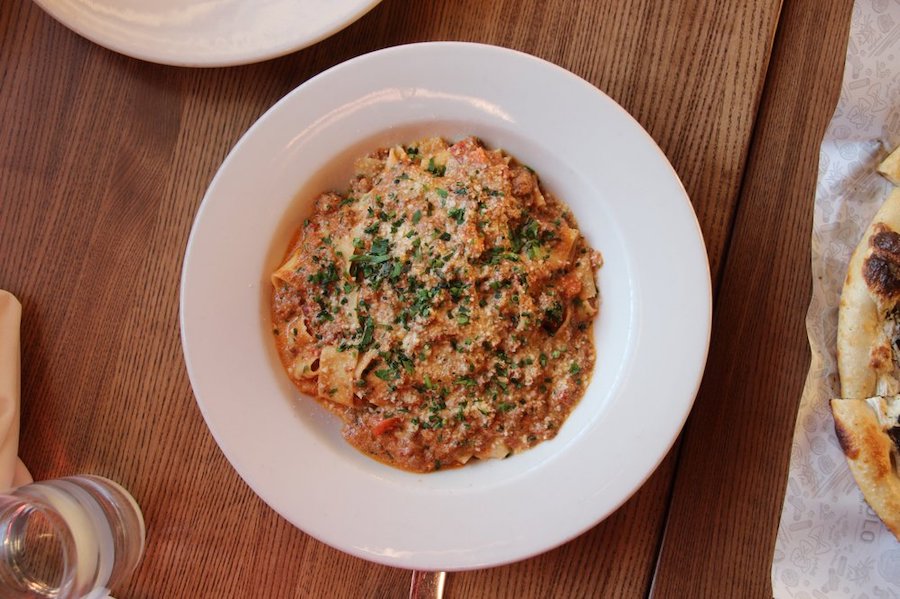 Tagliatelle bolognese at Tavolo. / Photo by Tiffany L. via Yelp

Every neighborhood needs a go-to Italian restaurant, and in Dorchester, this sweet yet suave trattoria offers the perfect setting for whatever mood you’re in. Want a quiet night dining solo? Tuck into one of the red velvet booths. Feeling social? Take a front row seat at the typically boisterous bar. Need some fresh air? There’s a big patio. Wherever you lay your napkin on your lap, you’ll want to dive face first into a garlic-buttery plate of fettucine shrimp scampi, a veal- and pork-loaded bowl of tagliatelle Bolognese, or a helping of spaghetti and meatballs. That last one sounds pretty simple, but chef Chris Douglass has spent years perfecting his beloved meatball recipe—and like Tavolo itself, we’ll never tire of it.