It's more than spin now. 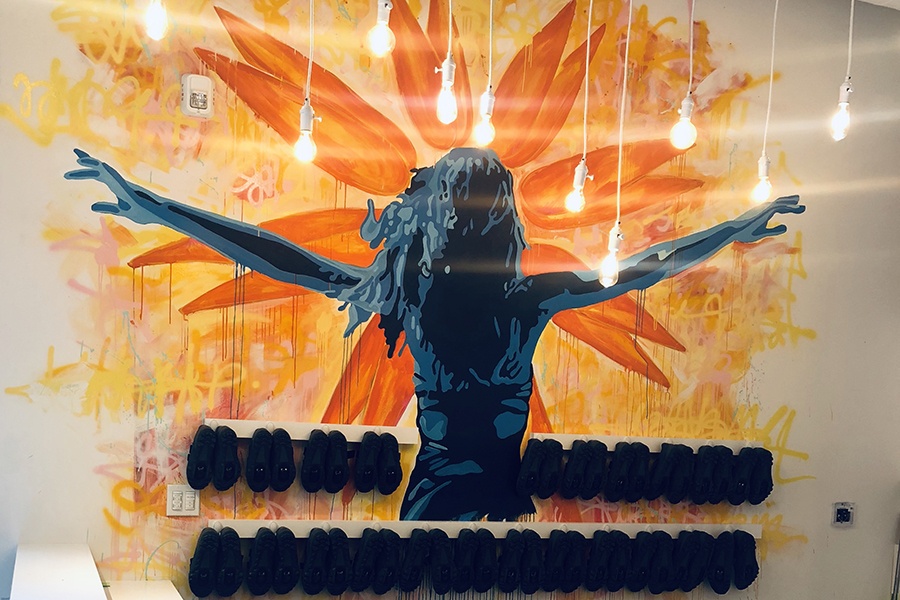 Jess Fracalossi knows that in order to be successful in the fitness biz, you have to be willing to innovate and grow. In 2013, she opened the first location of her soon-to-be-a-hit spin studio, the Handle Bar, in South Boston and this weekend, she unveiled her fourth, a new location near North Station. This time, however, she’s got something special up her sleeve.

The class is called MOVE and is a 45 minute strength and cross-training class featuring kettlebells, bodyweight exercises, and high-intensity plyometrics. Staying true to the Handle Bar method, it is beat-driven to the tune of 10 songs.

It starts with a mobility warm-up that leads into faster-paced cardio. After your body and mind are attuned to what is going on, you’ll move into alternating core and cardio, mixed with high-impact movements such as bounds and jumps. Then, the kettlebells are introduced for slow functional strength movements like bicep curls, overhead presses, squats, deadlifts, and more.

Fracalossi explains she really wants to help her clientele go from scared to death of kettlebells and strength training to feeling comfortable and confident with heavier weights off the bike.

“It’s the workout I’ve created,” she says. “I couldn’t justify having another gym membership, so I bought a set of kettlebells and would use them at the studio. Originally we were using bars, because we thought that would be more on brand, but quickly realized that for safety and space reasons that was not going to work. So kettlebells it was.”

If you feel intimidated by strength training, don’t worry. Fracalossi says the build-up will be gradual—and you won’t ever be lifting anything heavier than 40 pounds to start. MOVE classes will only be offered 12 times a week at the North Station location and each class is capped at 15 people, to ensure those who need extra help can receive it. Look for it on the Handle Bar’s website after September 15.

As for the bike room, don’t expect any new surprises at the North Station location, other than a room big enough to fit a fleet of 50 riders. And since it’s so close to the train station, the room is actually not even connected to the building at all. For sound-proofing reasons, it’s completely suspended on springs, which Fracalossi says you won’t notice as a rider, but I think it sounds pretty cool.

The MOVE room is simply a small studio space with mirrors on all sides. And commuters in the area can rejoice—this Handle Bar location has three women’s showers and two men’s showers.

“This location in the city makes sense to offer something complimentary, because it’s so central,” Fracalossi says. “Our riders at other studios wanted something that would be intense enough they only had to do once or twice a week to complement what they’re doing on the bike.”

So the idea is that if you’re a Handle Bar member, you pop into North Station for MOVE a couple times a week and ride at whichever location is most convenient for you.

“When Flywheel introduced Flybarre and B/Spoke introduced TRAIN, people asked me if I would think about doing something similar,” Fracalossi says. “And I said ‘No.’ I founded this business on simplicity and doing a few things really well and I felt like I had to stay in my lane. But we’re at a point now where I think I can stay in my lane and still take on something small to give our customers what they want.”

Fracalossi’s timing on diversifying the company’s offerings couldn’t be more perfect, as industry-shaking tremors are felt across the board.

Flywheel announced just last month that it will be closing a quarter of its locations in places like Los Angeles and San Francisco, citing heavy competition in those markets. In the midst of news breaking that a part-owner of SoulCycle hosted a fundraiser for President Trump, the spin studio saw a drop in attendance. And Boston is also experiencing these changes,  with the closing of Recycle, one of the very first spin studios here on the scene. Plus, the constant availability of new options, such as the influx of indoor rowing studios, means every studio has to innovate.

All of which is to say, the tides are changing—and studio owners either learn how to ride the wave or jump off. Fracalossi is learning how to ride, and her optimism is what’s going to keep her and the Handle Bar afloat. “It’s not like we’re knocking down the walls or anything,” she laughs. “If MOVE fails we’ll have a really nice daycare.”

For more information and to sign-up for classes: handlebarcycling.com.