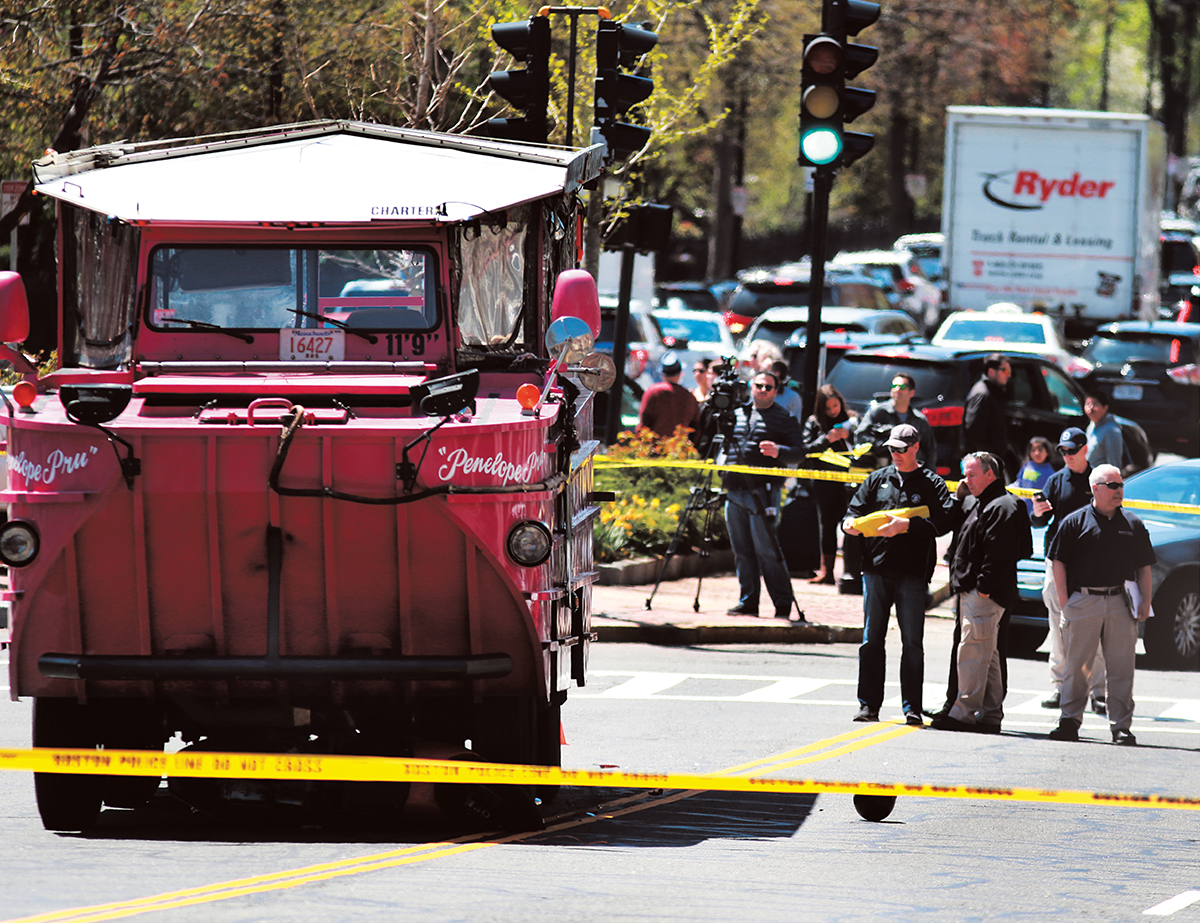 Investigators were on the scene after a fatal collision on Beacon Street between a duck boat and a scooter. / Photograph by Jonathan Wiggs/The Boston Globe/Getty Images

Every spring, dozens of psychedelically colored duck boats fan out across the narrow streets and busy intersections of Boston. They have playful names like South End Sara, Fenway Fanny, and Symphony Hal. Last April, the Penelope Pru—a bright-pink amphibious vessel—stopped at a red light on Charles Street as passengers watched their “conDUCKtor” point out historical landmarks. Everyone seemed to be enjoying the famously festive city tour.

When the light turned green, a moped in front of the duck boat tried to accelerate out of the way, but the driver never saw it. Witnesses shouted to stop but it was too late: 28-year-old motorist Allison Warmuth lay dead. Then three months later, a duck boat clipped a woman crossing a street in the Back Bay, knocking her unconscious. In the wake of these collisions, the question swirling through town has been whether these aquatic tour buses have any place on our streets at all.

Boston, to put it mildly, has a longstanding love affair with duck boats. They shuttle Tom Brady and the gang to City Hall for every Super Bowl parade, pump untold dollars into the tourism industry, and serve as evangelists for everything we love about Boston. They are also nearly twice as long and wide as a pickup truck, originally designed to bring soldiers to battle during World War II. Today, flocks of them carry tourists in cities across the country.

Still, transportation activists warn that ubiquity doesn’t translate to safety and say the threat of catastrophe is always looming. Drivers, who sit 10-plus feet behind the front of the multi-ton boats, have to mind pedestrian-swallowing blind spots. A growing number of concerned citizens would prefer it if we sunk every last duck boat in Boston Harbor, for good. “They are just too dangerous,” Warmuth’s parents, Ivan and Martha, say.

It wouldn’t be the first time an accident wounded a city’s duck-boat industry. Philadelphia’s went under last year after two crashes claimed three lives and insurance premiums shot up 330 percent. In Seattle, a company retired a whole class of duck boats after one crashed into a bus in 2015, killing five and injuring 69. In 1999, two out of the three of the duck-boat operators in Arkansas shut down after 13 passengers drowned in a lake. These were different companies with different types of vehicles, but it’s clear that now, more than ever, all eyes are on duck boats everywhere.

Critics here know that banning duck boats outright is a long shot—“That battle would be very, very hard to win,” says Becca Wolfson, executive director of the Boston Cyclists Union—but they have successfully lobbied for a crackdown. A new law requires duck boats to have both a tour guide and a driver (as opposed to one person filling both roles), and each vehicle must have blind-spot cameras and sensors to alert drivers to out-of-view obstacles. Boston Duck Tours, which owns the vehicles, says it planned to adopt those protections anyway, noting it added many of them months ahead of time. The changes, says spokesman Joe Baerlein, “underscore the company’s commitment to the safety of our guests and the public.”

New rules are a welcome change to many, but perhaps more than the duck boats themselves, it’s the roads that need updating. After all, if gargantuan military vehicles have to share Boston’s narrow, winding paths with cyclists, pedestrians, cars, and errant dogs, we shouldn’t have to worry each time a war machine roars up Beacon Hill. The protected bike lanes and traffic- calming measures proposed in the city’s new transit plan will go a long way toward improving safety. The Warmuths have even proposed limiting the streets ducks are allowed to use. “The city is a chaotic place,” says TransitMatters cofounder Marc Ebuña. “Making it safer is not just about how many eyes, or how many sensors, you have on a vehicle.”

In the meantime, let’s just hope the rest of us can stay out of their way.